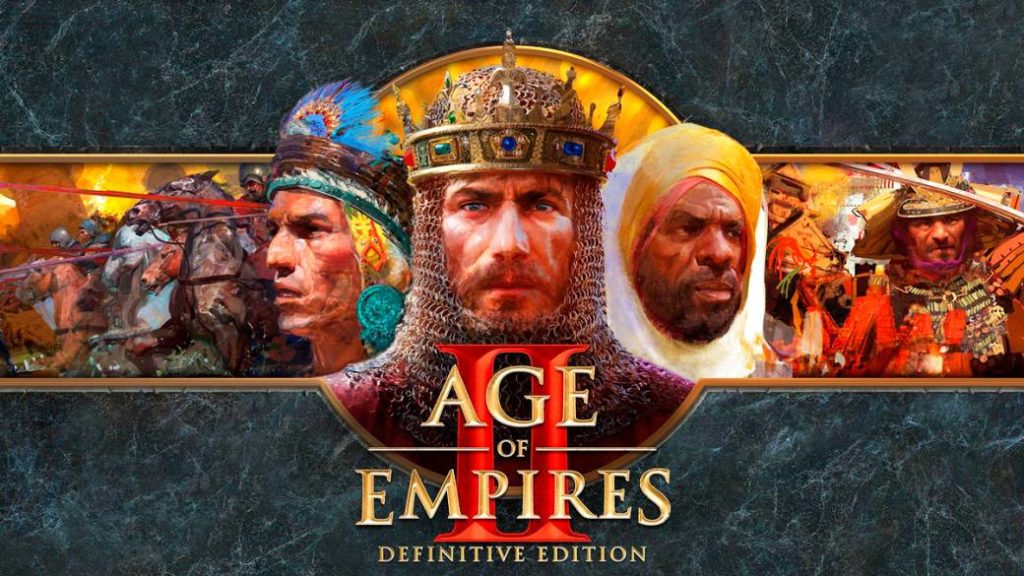 The Middle Ages advances to our contemporary era with a remastering worthy of kings.

During the late 1990s and the first half of the 2000s, Ensemble Studios established its empire in the real-time strategy genre with Age of Empires. This saga became a benchmark for a system that maintained a fair balance between accessible learning, depth of play and challenge. Likewise, expanding and maintaining our domain required a constant activity, sustained between the care and defense of our settlement and the conquest of new lands. The games continued as a historical era, where the tension of war was mixed with the satisfaction of building a new city.

In recent years, Age of Empires has been reborn in the new generation with a remastering of its first titles. Last 2018, Age of Empires: Definitive Edition offered an excellent audiovisual improvement that did not alleviate the shortcomings of its artificial intelligence. On the other hand, Age of Empires IV announces a promise to continue with a new installment full of epic battles in amazing quality. While we wait for its launch, we can enjoy Windows of Age of Empires II: Definitive Edition, whose beta we brought you our impressions. Improvements and additions add to what we have played, although we have missed that certain aspects are polished.

A love letter to the Middle Ages

Developed by Forgotten Empire, Age of Empires II: Definitive Edition is the remastered version of Age of Kings, located in the early Middle Ages after the fall of the Roman Empire. In it we will see all the love that this saga has professed for history, with necessary licenses in favor of the narrative and that glorify the period of wars of that time. This love letter, moreover, is not faithful to a single culture: 35 initial civilizations are included, to which Lithuanians, Bulgarians, Cumans and Tartars are added. All of them are described in the History section, which contains an interesting and educational component for the most profane in the field. And, although Age of Empires does not pretend to teach us in History, it does provide interesting notions that arouse interest in deepening on our own.

In the campaigns, we have a generous assortment of historical personalities and their most relevant war moments: Joan of Arc, Attila the Hun … to which are added those of the expansions like The Forgotten, where we met Vlad Tepes, and a novelty: The Last Khans, which includes three entirely new campaigns. It is appreciated a content so generous for the solo mode, which will fill the conquerors who do not like the online mode with fun hours. We also highlight the narrative of each arc and its corresponding educational component. The deeds of each historical character will catch us, and its varied mission design will give us a fresh experience that will result in many hours of play. Likewise, it is not the only variety: we also have Historical Battles, which consist of military challenges based on relevant chapters of the war history in the Middle Ages and, as we can deduce from its name, focused solely on the military branch of the game. On the other hand, we have The Art of War, based on the work of Sun Tzu, which consists of a series of challenges based on the achievement of objectives in record time and awarded with medals. This mode is intended for the most experienced players in the saga, but first-timers can enjoy William Wallace's campaign to learn the most basic mechanics of the game. 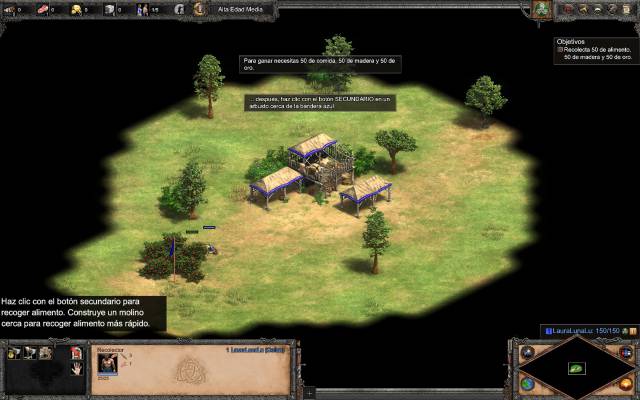 Advance to a new age

The multiplayer mode has also received special care, with dedicated servers, a decent connection, crossplay between Xbox Live and Steam) and a good range of customization: whether we want to face teams, compete against everyone, or ally with another player in Against AI, we will always have a game for us. Also, we can enter as spectators and connect directly with Mixer, which facilitates many tools to the world of competition and streaming. With the map editor, we can also plan new challenges for the other conquerors and give free rein to our creativity.

During our impressions of the beta, we already commented on the excellent graphic improvement that makes Age of Empires II: Definitive Edition shine brightly: a luxurious variety of details and textures in very elaborate and beautiful environments, accompanied by much more fluid animations than in its 1999 version. The sound has also been optimized and the technical failures we detected during the beta have been polished. It keeps that ambient and epic music that brought great emotion to some battles where we will never be idle, since, as in the original game, we will always have a task at hand, whether exploration, struggle or maintenance of our empire. 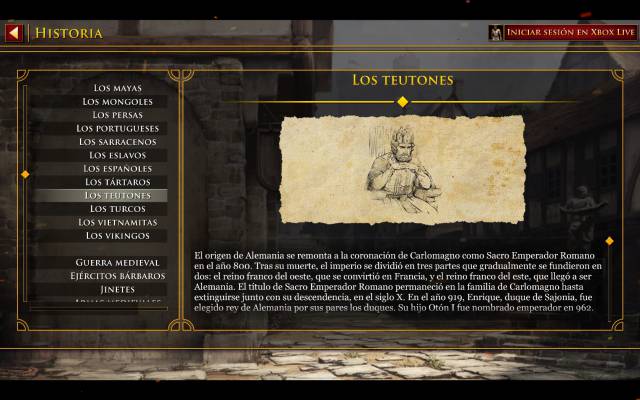 Regarding the readability of the texts, we observed a significant improvement in the size of the fonts, accessible to almost all views and without being invasive in the interface. However, the typeface during the narrative sequences seems very little integrated into the medieval atmosphere of the game. The translation of the texts is another well achieved aspect, since it differentiates between the registration of the game instructions and the narrative parts. As for the audio, it is only located in Latin Spanish.

The gameplay in Age of Empires II: Definitive Edition has been greatly improved in this new version. As we have already mentioned, a successful balance is maintained between the margin to create and improve our settlement and the moments of action. The AI ​​behaves in a logical and correct way, although the displacement of the troops can be improved: in this last game we had more moments in which our troops got stuck along the way, without knowing how to recover the path despite having marked it with other routes On some occasion, we have lost a soldier for being in a land with no way out. 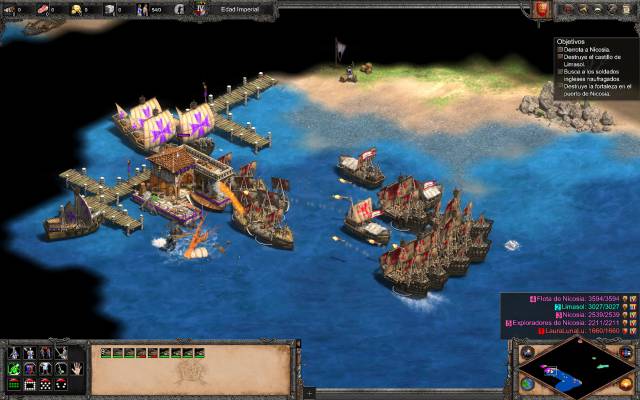 The management of our population and troops is much more comfortable thanks to an intuitive menu and the speeding up of some commands. We can determine the default behavior of the army and the exploration, so that the displacement on the map is quite agile. Also chaining successive tasks and creations is much more comfortable and direct. We also have a button for direct access to inactive citizens and those dedicated to a specific task, which greatly facilitates the administration of our bases.

However, Age of Empires II: Definitive Edition is an almost perfect reissue, loaded with content and that does not neglect any type of player: the novices will have room to learn to create an empire and make it prosper, veterans will be able to Try the new missions and challenges, in addition to visiting the already known campaigns. At the same time, the solitary and multiplayer mode receive the same attention, which is an example for all the titles that incorporate both modalities. And, of course, their games will become as addictive as we remember from our first conquests, when the Internet made us advance to the next age. 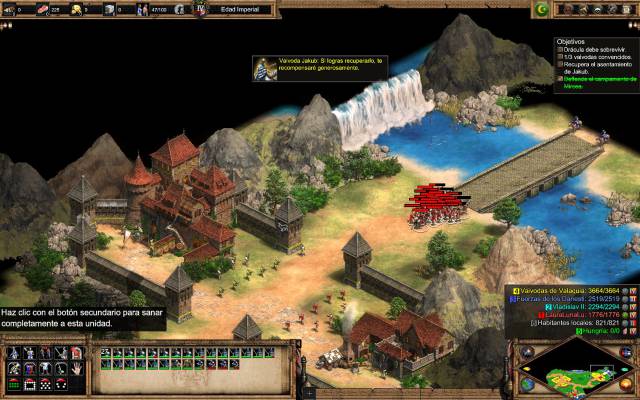 Age of Empires II: Definitive Edition has taken a successful leap to the Contemporary Age. With a very generous content to play alone, which includes several modalities; and a very well maintained online connection, maintains a range of difficulty that covers all types of players. The audiovisual improvements make the game look like never before, and its playability has been pleasantly streamlined. However, although AI behaves logically, the movement of troops can be frustrating, since they continue to get stuck at some points. However, it is still a very addictive game with a dynamic and complex system that will provide us with many hours of exciting games.