You are here: Home / PlayStation 5 / Astro Playroom, Reviews; a gift for Playstation fans 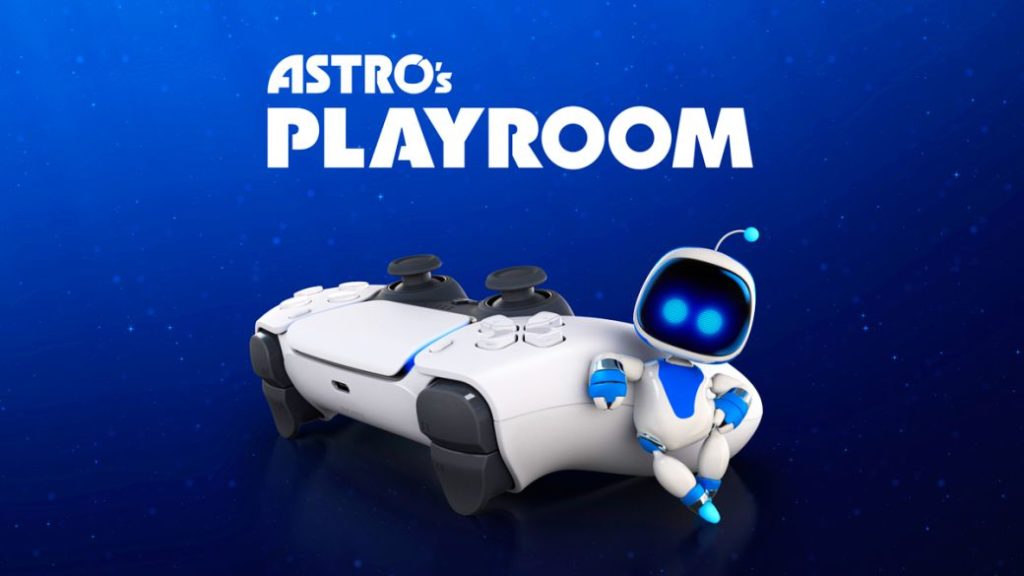 Astro Playroom is easy to ignore. There is no expectation about him, he is discreetly included in PS5 as one more menu option and in the media it is not surprising that he is overshadowed by shots like Miles Morales or Demon’s Souls. It doesn’t even have its guaranteed role as the mandatory “family game” at console launch, with strong alternatives present like Little Big Planet and its co-op. It is not a game whose place is easily understood before playing it, it is something that we discovered once we got to the controls of the DualSense.

Team Asobi is rightfully becoming one of the brightest stars of SIE Japan’s internal teams. Although the role of Japanese studios within Sony’s world studios pales in the media alongside the Naughty Dog, Guerrilla, Insomniac, etc… it is clear that there is a lot of talent in the Tokyo offices. They already demonstrated it with Rescue Mission, at a time when Sony’s virtual reality glasses needed a flagship game, creating not only a magnificent platform, but a tangible demonstration of how VR can promote traditional genres without having to stick to the immersion of the first person. With Playroom they once again exercise the role of tailors to create a tailored suit, which in this case is a creative tour of the possibilities of the new command, but also something else. 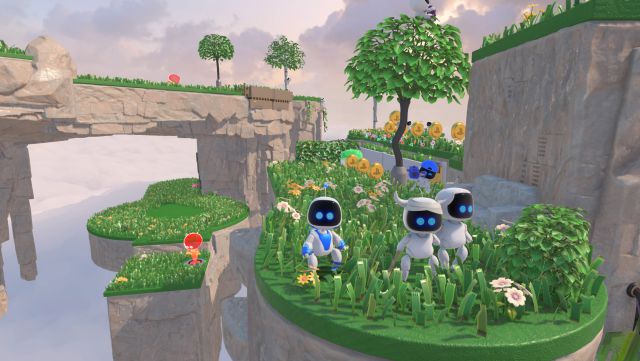 Although its technical demo role is impressive and we will comment on it, we do not want that facet to completely cover the heart and good work that Astro gives off as a game and as a tribute to Playstation. In what seems like a clear promotion of the character to Sony’s “mascot”, Playroom pays tribute to the characters, sagas and moments that have marked the trajectory of the Sony console since its launch in 1995, in a friendly and awakening way. curiosity, raising the set to new heights above the intrinsic quality of the game we have in our hands.

Astro Playroom as a game

Included by default in our brand new PS5 we will find Astro Playroom. It is not new that Sony offers free apps and semi-games. The original Playstation had an arch-remembered Demo 1, in which we could see for the first time fragments of games like Wipeout, Tekken 2 or the iconic T-Rex demo. On PS3 in Japan there was the nice application starring the bull cat, which offered information, recommendations, news and celebrated important holidays with us. In PS3 we also found Home, Sony’s attempt to materialize in a palpable way the online capabilities of the console. They all share an idea of ​​trying to illustrate certain capabilities of the console, but they were proper games and this is a point that is worth highlighting here: Playroom is a game with all the letters, an attractive platform with collectible elements. It is not a demo or a hobby, which sets it apart from other initiatives. 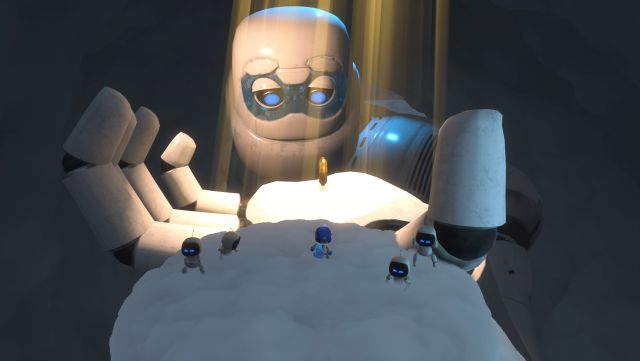 Astro’s premise is to explore our own Playstation 5, visiting four thematic areas related to aspects of the console such as the cooling system, the ultra-fast data transmission, the CPU or the memory, cleaning up the “bugs” that appear to us. , solving problems and collecting consoles and peripherals from the past of Playstation so that other stars can play. The protagonist will use his jumps, thrusters and punches as the main tools to explore each area and find everything that the game hides.

In this facet we find another great work by Team Asobi, with a not inconsiderable knowledge of how to plan movement, inertia, jumps and cameras for the maximum enjoyment of the player. There is an undeniable “Nintendo flavor” in the way the mechanics and essentials are set up, a comparison is not at all easy for any studio to come by even today. It is not a very long game, but it has enough secrets to discover and some additional extras that extend the life of the set and give it enough travel so that it does not fall short, without being a game comparable in content to what it would be required of a commercial product.

It’s a friendly game with hardly any difficulty peaks and a simple progression. Where his skills as a platform that could be much more demanding is better appreciated is in a special section called “races”, linear phases made to order to invite the player to complete them in the shortest possible time, competing against the times of players from all over the world. It is in these phases when the exquisiteness of the formal aspects of the platforms is most appreciated and where the possibilities of a conventional and high-budget platform with this equipment are glimpsed. 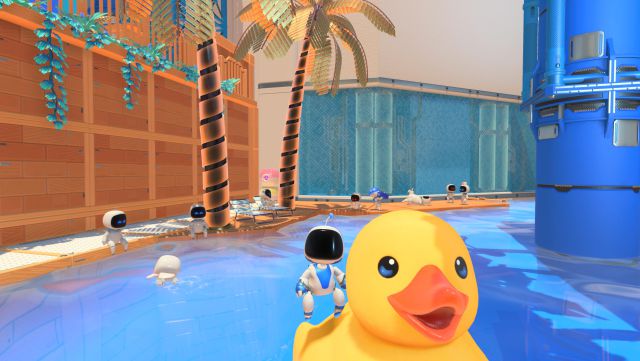 Graphically it is not chimes or the product with which you are going to justify the money of the new console, but the graphics are colorful and clear, with a resolution of 4K and impeccable 60 FPS that are as pleasant as the world in which we move . The various worlds are varied and full of details and winks, although we would love for them to be bigger and have more activities and / or special encounters. It is that, the general size of the game, perhaps the main element that identifies Playroom as a non-commercial game, which does not mean that it has much more content than we expected in the first place with it.

Astro Playroom as a tribute

One of the details that attracts the most attention is the sympathetic and complete tribute that is paid to the entire Playstation family, to all the games that have been important for the different generations of consoles. In all areas we can see Astros characterized by different iconic characters, from their own sagas such as Uncharted, Ghost of Tsushima, Ratchet, Death Stranding or Wipeout to third-party sagas that maintain a close relationship with the name Playstation, such as Tekken, Final Fantasy, Ridge Racer, Silent Hill or Metal Gear Solid, to mention a few. We will also see the Astro play all kinds of games, robotic parodies of well-known names that complete the nostalgic pack. 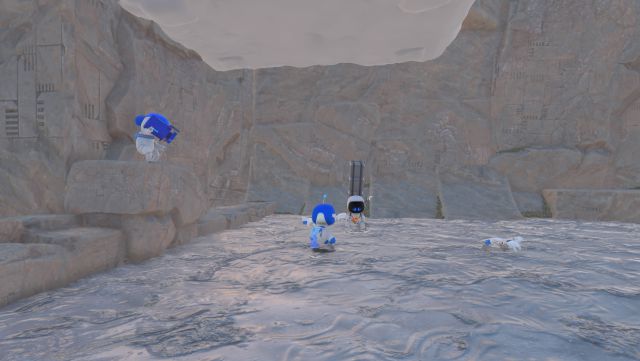 Throughout our adventures through the different areas we will find the consoles and peripherals that are part of the Playstation family, perfectly recreated in 3D and with some comment that defines them. They serve no purpose other than to be nostalgic collectibles to fill the game room with, but they are fun to find, view, and rotate to lose ourselves in the memories. We will also find pieces of puzzles, murals linked to each console and that decorate the Astro place of play. In short, collectibles with meaning and purpose in order to emphasize their homage to Playstation history.

Astro Playroom as a technical demonstration of the DualSense

The third pillar that makes sense of the Team Asobi game is the technical demonstration of the new PS5 controller. The Tokyo studio is good at making games around pieces of technology to get the most out of them, without forgetting that they are making a game that has to stand up for itself and not a demo that can be justified by doing that single demonstrative task well. . But it is undeniable that Astro Playroom is the best possible showcase to show the potential of the new command and discard the idea that it is the same as always. 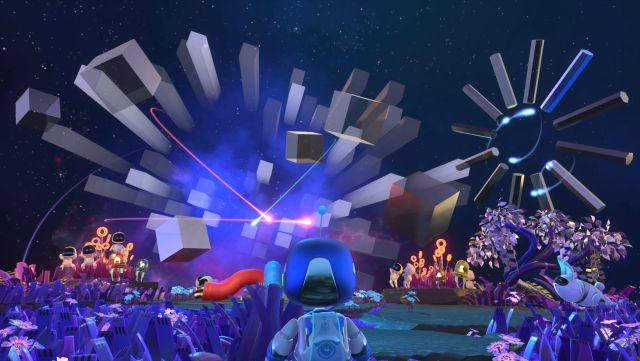 The adventure is designed to show multiple possible possibilities with the controller, introducing circumstances that are conducive to this function. For example, there is a lot of activity related to pulling cables and in them we will be able to appreciate the tension of the force that we exert before it breaks; there are sections that include a rifle and bow, perfect for illustrating the strengths of adaptive triggers. The reaction when pressing the buttons is exaggerated, but satisfactory and the remote comes to life in our hands thanks to the sound effects that come out of it. We will also have the opportunity to use the gyroscopic controls to handle a hang glider, to use the touchpad to make us roll and even use the microphone of the remote control to blow and activate the mechanism (yes, Nintendo DS already did it in its day, it is nothing revolutionary, but it is a detail to comment). But what most catches our attention is the ability of the controller to reproduce surface sensations, how it is able to evoke the sensation of walking (or even skating) on ​​different surfaces.

As a demonstration of the new controller, it is simply brilliant and serves the dual purpose of showing players its capabilities and challenging developers to use their imagination so as not to miss out on this facet. It is not difficult for us to imagine the potential of the DualSense for car games, for shooters (COD Black Ops Cold War uses it brilliantly indeed) or for horror games, to choose the most obvious examples, although its potential should be taken into account for any game as soon as the study makes you interested. If that potential is left in the drawer, at least SIE will be able to point to Playroom to show that the capabilities of the new controller were not an invention, although we have no doubt that there will be interest in developing interesting ideas with it.

Rating a free game can be a bit of an unnecessary exercise, considering that there is no “buy recommendation” factor here. But since Astro Playroom is a brilliant title, it is worth leaving our assessment and recommendation for the annals that it be played as one of the first activities with your PS5. Team Asobi has done a fantastic job that is remarkable in all its facets, a gift for buyers of a PS5 who will enjoy three times the solid invoice of the game, its fantastic use of DualSense and the heartfelt tribute it pays to the game. Playstation story. Only the limited duration of the game and the lack of more activities, bosses and special events give away the place of the Astro Playroom in the early PS5 universe. We’d like to think that, with more budget and a proper approach, the team would be in a position to create a multi-karat platform adventure. And if that’s the case, Astro may have a lot more to say in the future.
Score: 8.5