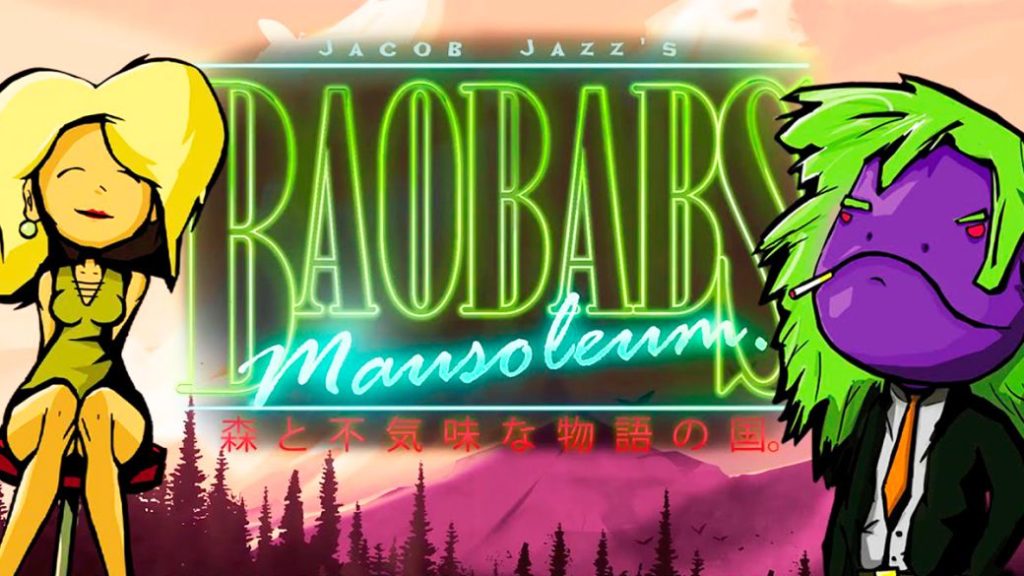 The compilation of all three Baobabs Mausoleum episodes is coming to PC and Switch. Surrealism in triple vein.

The term grindhose refers to theaters that showed exploitation cinema in double or triple programs. You could see there low-budget films and distracted morals full of sex, violence, bad taste, madness … A kind of surreal descent into the hells of the B and Z series where you can enjoy with your friends swimming in tons of popcorn (and blood ). It is the term under which the three chapters of Baobabs Mausoleum that had gone on sale separately have been grouped, and we assure you that it fits him like a glove. Developed by Celery Emblem (a one man army: Jacob Jazz) and distributed by the brave Zerouno Games, you have one of those game in front of you that you will not forget. Join us on this crazy journey to find out why.

Watracio Walpurgis, a vampire eggplant in a tie who is an FBI agent, has an accident with his car. After a hike seeking help, he stumbles upon the town of Flamingos Creek, apparently a place that can only be reached on March 11 every 25 years. That is to have aim. Full of characters who are more bizarre (in the popular sense of the term), this place that only appears in nightmares becomes a Kafkaesque ordeal from which it seems very difficult to get out.

In Flamingos Creek we will meet the Reverend Thimothy Gloster Jr, a beaver who officiates burials; Gregory Funguslungus, who people hate because he has moss between his teeth and spits when he speaks; surfer Beach Dude, who collects vinyl from the Fixies; Frígida Weebles, a psychopath who likes to dress her meals with human eyes; to the Chinese mutant, who says that no one sees him because he is an alien spirit; to Gumersindo the friendly Guillotinejo, who in addition to passing the rock through the guillotine is a coachman; Verónica the paraplegic, who likes to enjoy public executions with her family; the legendary director John Carpenter, who has bought a townhouse near the town square. Let’s see, let’s see, is there no one normal in this town? Well yeah, Charlie Brown, who only gives free samples the first time. We have not counted them, but we assume that they add up to 63 characters, since from time to time they ask us if we know who is the 64th inhabitant. 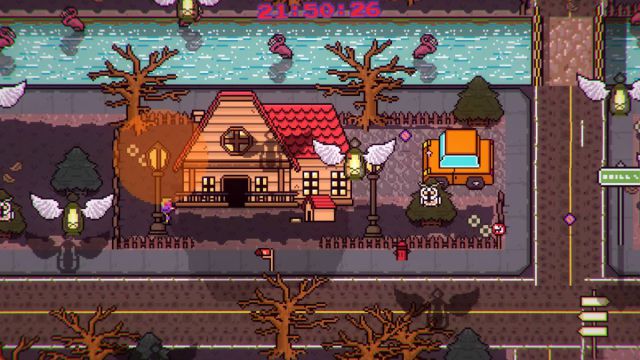 Set in 1990, we will be accompanied by video tracking images of the channel that we have tuned in, with an annoying VHS filter that we can activate and that fills the screen with cathodic imperfections. All to further entangle a plot that adds stripes like a toad that is a perverse and ancient god, a gigantic metallic chicken that crosses space or a satanic sect that practices cannibalism. And what about the Sketerbot, a civilization led by a center-left worm in a diving suit, who travel thousands of light years destroying planets? Luckily we also have happy endings. The moon boy ends up making friends with the donut girl, who had always been teased for her status as an industrial bun. How nice huh? If Jacob Jazz, the lysergic mind that has imagined all this, gets married one day, it would be nice to take a look at the wedding and the guests, because that must be a party.

And it is at this point in the story, when Watracio remembers that the vampire aubergines, when tying the left shoelace, while chewing white chocolate gum and looking at the full moon … BECOME A GIANT IGUANA OF 37 METERS HIGH!!

The deconstruction of the video game. Speaking to the creator

In terms of art, Jabob Jazz describes Baobabs as a mix between Tim Burton and Pokemon with much of the surrealism of David Lynch, the musical section being very Tarantinian (fantastic, the main theme in the 1950s of the Russian group Messer Chups). Although there is a lot of influence from the cinema, when it comes to video games the author wanted to make his own version of Link’s Awakening, his favorite Zelda. It is not strange this crossroads knowing that the mystery of the Twin Peaks series permeates the soul of both games. We should also add to the formula a certain touch of the graphic adventures of LucasArts, although the shadow of Zelda is elongated and also appears when thinking about the concept of the video game itself:

The Legend of Zelda: Ocarina of Time is the perfect game, the great epic, and Majora’s Mask arrived and destroyed it, deconstructed it, to make something more sordid, darker, more gloomy, and create something that I liked much more. That was my idea with Baobabs, through sketches organized in an anarchic way to destroy the standards of the video game and create something different but fun.

Regarding the main character’s design, he went from a frog (hence his first name) to being an eggplant due to Jacob’s obsession with fruits and vegetables. The eggplant also played with the colors, with that green root that contrasts with, in his own words: That mutant purple. 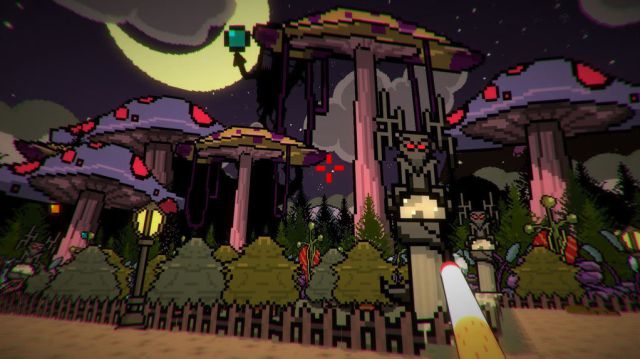 The original episodic concept (the first came out in 2017 and the third in 2019) was due to the pure need to pay off hard work. Although the author declares that he would not make a game with this structure again, the truth is that the result fits well due to the influence it has of the television serial (X-Files, the aforementioned Twin Peaks …). Interestingly, the space between the different episodes did not vary one iota on the roadmap due to user feedback. I am very stubborn, he commented to us, it is my problem, surely.

Helped in the first bars of the programming by Cristian Barra, who developed the dialogue system among other things, this has been a long and hard solo journey. In Jacob’s words: This game is me locked up in a garage for five years.

The winding road episode by episode

Baobabs Mausoleum may be ugly at first glance, but it is getting into its world and making its familiar overhead perspective our own. The first episode has a certain linearity in its development, but it surprises with its narrative, its characters, the absurd situations and moments such as when we find bicolor 3D glasses on the ground, like those of the stereoscopic cinema of the 50s. It turns out that we put them on and the game happens to be in three dimensions and in the first person where we only see the character his cigarette. It will return to this visual and playable twist on some other occasion in the following episodes.

The second opts for a small open world. We have the town here to explore, although its lack of clarity when it comes to setting objectives and the moments in which you have to find a numerical code that is not clear at all can drive you crazy (blessed YouTube guides). There is risk in the proposal on several occasions. To give you an idea, at a given moment they inform us that to resolve a situation we must do it at night, and that the time of day in the game is synchronized with the console clock. We then realized the reason why the characters changed places in each game we undertook. Good! We think, until we realize that we are playing at eleven o’clock in the morning and we will not be able to continue until it gets dark. 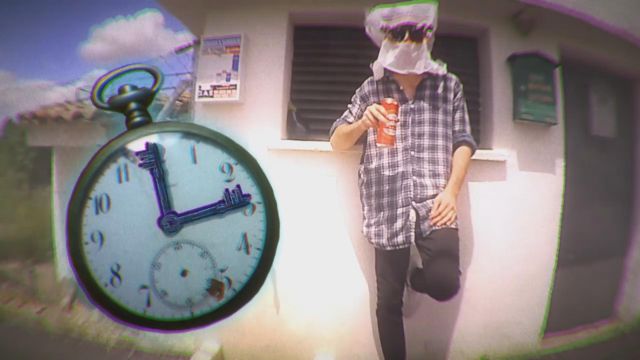 Episode three is the most surprising. We start with some Full Motion Video scenes that we move forward by fiddling with the direction and combining buttons. There we find a small church, a dilapidated basketball court next to it, a boy with a Mahou and a bag on his head, an eggplant with sunglasses having a beer in a bar … Everything in order. It is followed by a brief stay in the sky managed by a Lovecraft-style octopus and a 3D minigame in which we run over with a car (horrible control, it must be said) a plague of coffin rabbits that are really sheep. A subplot of a kidnapping that began in the previous episode will accompany us until the end of this one, which closes somewhat predictably but with the best possible conclusion.

Baobabs Mausoleum: Grindhouse Edition is a game that keeps raising our eyebrows. It is partly shipwrecked when it chooses to abandon 2D in clumsy 3D worlds, it is irregular, somewhat confusing in the exposure of objectives and not very long despite encompassing the three episodes that were previously published separately. But it is also a very imaginative, crazy game, full of extreme characters and some moments that we will always remember, with a soundtrack that includes some masterful themes and with a handful of secrets to discover beyond its end. It is the clear example of a game that adds more than its parts, although only in quality, in terms of weight, the more than five and a half gigabytes that occupied the three separate episodes have been optimized in less than five hundred megabytes. Thus, it is more than possible that the sympathy you develop for this anomalous town will make you keep it on your hard drive for a long time. And without having to wait to visit again on March 11, 25 years from now!

It meets the expectations of what a good game is, it has quality and it does not present serious flaws, although it is missing elements that could have taken it to higher heights.