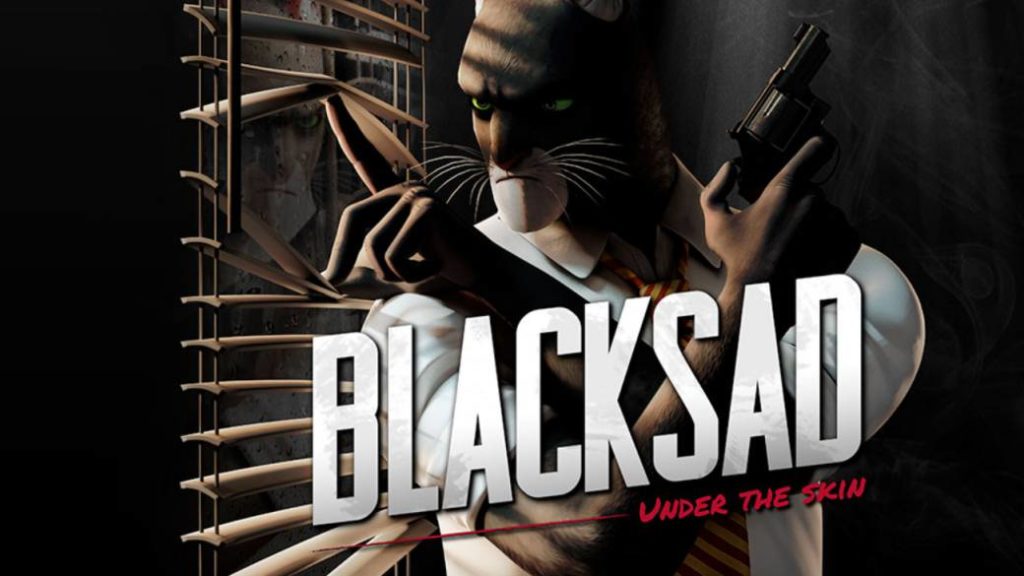 The graphic novel by Juan Díaz Canales and Juanjo Guarnido makes the leap into the world of video games with an adaptation as faithful as it is problematic.

We have tried it for active and passive. For the devotion we feel towards Blacksad comics, because we love a good graphic adventure and Pendulo Studios. But nothing, there has been no way. Cats may have seven lives, but video games don't. Today, Blacksad: Under the Skin has too many setbacks. The problems happen one after another and although we shrink water with the best of wills, closing our eyes and ignoring half of the things that happen on the screen, it's like trying to save the Titanic. Loading screens that get stuck when they go for 99%, characters that speak without moving their mouth or face, moments in which they have to answer and do not appear dialogue options, textures of tiny resolution, pulls and even situations in which that the game freezes, forces us to leave the menu and we have to repeat the last half hour because it had not been saved since then. Blacksad: Under the Skin is not up to par and demands more patience than your proposal deserves.

Story of a shipwreck

Last summer we were able to try the title in Paris, at the Microïds offices, and the feelings were very positive. We only had one but: “We have to recognize that in our first hours with the title we have encountered many problems at the technical level, with important bugs and comings and goings of the audio, but it is normal in this type of tests and there is still time to solve it and correct it before launch. Nothing to worry about … for now. ” With the title on the street for several weeks, time is up and the situation, more than worrying is already alarming. Not only have the problems not been solved but now there are more and they are even worse.

It is inexplicable. In that event, the developers promised to solve all the errors and several weeks after the event until it was announced that the title postponed its exit to finish polishing and grooming. The feedback seemed to work. After that it was delayed once again and, in the midst of the chaos that generated so much release date, the game was published by mistake on PlayStation Store and Xbox Market earlier than expected. The first buyers of these versions announced all the problems and failures they encountered, and Microïds said they were due to the lack of a “day one” patch that would be for the official launch day. We, who have played with this patch, do not want to imagine how it should be before. Currently the game, at least in its version for PlayStation 4, is a constant fight against wind and tide in which we are interrupted several times for every hour we spend at the controls and in which we are forced to repeat dozens of sections because Our time is not valued. Until further updates, Blacksad: Under the Skin looks like a broken toy. 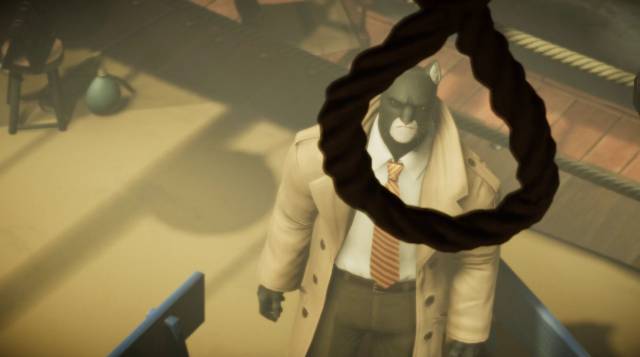 It is sad that during the last months the playable bet has not grown proportionally to bugs and technical problems. What we liked least about our first contact with the game is maintained: quick time events and controls. As for the QTE, a few months ago they were somewhat confusing and difficult to understand, however incredible it seems to use these adjectives when talking about QTE. Now there are tutorials explaining them, but they are not even needed because in this time they have been oversimplified and the game has become too easy, using languages ​​from the past (Telltale Games) for fear of making a personal bet. For its part, the controls have not been replaced and John Blacksad, our protagonist, remains as clumsy and heavy as in the first demo. It gets stuck between the objects on the stage, it is difficult to turn and start walking, it often runs into invisible walls … The gameplay feels rough, slow and not very fluid.

As if that were not enough, what we liked most about the game in its day is losing strength as the hours happen. The great difference of Blacksad: Under the Skin with respect to the works of Telltale Games (The Walking Dead) and Quantic Dream (Heavy Rain), with the most similar ones saved on a formal level, seemed to reside in that here we were going to be “a real detective. " Choose which scenarios to visit, write our deductions in a notebook and combine them to reach conclusions, a cat sense that allowed us to enter bullet time (slow motion) and use our feline smell, ear and sight to discover new clues … and so on. But as we said, with the passing of the hours everything is discovered as a mirage.

The choice of scenarios is very punctual. In fact, despite the variety, which must be recognized (it has more than twenty different locations), the places are not usually as large as promised. Few reach the dimensions and level of detail of the boxing club, which has been the main protagonist of the trailers and the promotional images of the game, with several heights and outdoor areas with people walking. In turn, from the deductions the game warns us, preventing us from reaching erroneous conclusions and forcing us to discover almost everything before letting us advance in the plot. It's hard to miss anything apart from collectibles. Blacksad: Under the Skin is more linear than we thought and usually takes us by the hand. Of course, the trial version was very well chosen. And detective sense is better not to talk, it only serves as a constant bag of deux ex machina for the argument. The most useful inquiries come from the hand of this system, practically remote control. 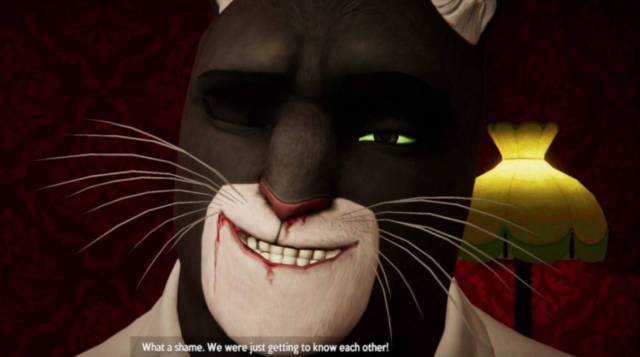 The three feet to the cat

Not everything is bad, of course. It is possible to find the cat's three feet and find good things in it. Blacksad: Under the Skin remains a love letter to the legacy of Juan Díaz Canales and Juanjo Guarnido. The graphic novels on which it is based, which we can never stop recommending, revolutionized the European comic in its day through a very black recreation of the United States of the fifties. A country of anthropomorphic animals that overflows racism and violence, and that has echoes of the great adventures of Philip Marlowe and Samuel Spade. Life through a prism of duty, love and lies. His spirit is perfectly collected in the Pendulo Studios video game (Hollywood Monsters, Yesterday Origins, Runaway), where we will find winks and references to the original work in every corner. Characters and places extracted from the comic, lines of dialogue and camera shots identical to those of his cartoons, easter eggs that connect with the stories we already knew … Definitely, Blacksad: Under The Skin is like buying a volume from the series, Open it in half and breathe in the smell of its pages. Its developers continually demonstrate having studied it by heart and feeling as much love for their characters as we do. If something can do that we do not give up after the fourth bug and the fifth screen freeze are precisely the setting and the history of the game.

The plot, approved by Juan Díaz Canales, is between the first and the second part of the graphic novel (that is, on horseback from A place among the shadows and our favorite piece, Arctic-Nation). In it we get under the skin (Under the Skin) of John Blacksad, cat and private investigator, to work on a crime in the gray New York of the fifties. A case that serves as an excuse for an emotional parade of familiar faces: Weekly, our fetid friend of What's News; Smirnov, the dog police chief with whom we share favors; Jake Ostiombe, a suspicious gorilla of dubious ethics who is engaged in boxing; and even Poli, the owner of the Iguana, a bar only for reptiles in the suburbs of the city. To them are added many faces that are part of John's past and family, and that appear through memories, phone calls or very specific scenes. From his beloved Natalia Wildford to his sister Donna, his nephew and his father. The rhythm, the script turns and the great themes about life under each decision are the only thing to cling to during the 10 hours that Blacksad: Under the Skin lasts. 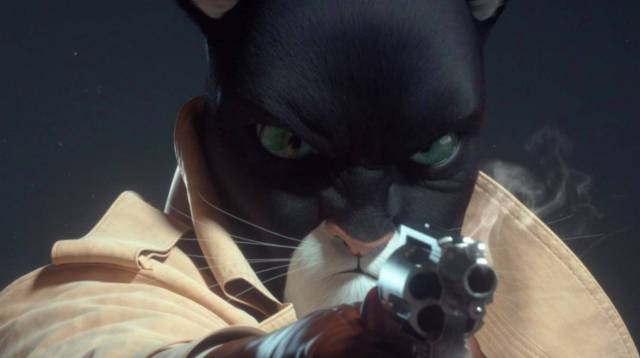 History may not treat sex and violence with the rawness of the comic, but it still deals with issues such as corruption and racism, not too common in the industry. The writing, the best of Blacksad: Under the Skin, is enhanced with the option to choose in which languages ​​we want voices, texts and subtitles (Spanish included). The magnificent dubbing in Castilian features voices such as Gabriel Jiménez (Hugh Jackman) and Roberto Encinas (Nathan Drake), who are accompanied by a soundtrack loaded with jazz and, although repetitive, perfectly in keeping with the tone of the adventure . At a graphic level, similarity occurs, and even with the problems of resolution, framerate and facial hieratism, the artistic section evokes the drawing and style of the comic with its colors, designs and approaches. It might be worth talking about its 6 different endings, the moral decisions of the section “Your own Blacksad” and that list of trophies with the curious challenges it poses (try to stain our hands with blood as much as possible, for example), but talk about playing Blacksad: Under the Skin is an utopia with as many problems as it presents. It is hard enough to overcome it only once. In addition, that history changes course is again linked to very specific and detectable moments, many of the situations being less than inconsequential.

Only lovers of the wonderful work of Juan Díaz Canales and Juanjo Guarnido will be able to withstand the rush of the game, which seems determined to bother us and make us throw in the towel. The enormous amount of technical, graphic and playable problems, added to the constant bugs that lurk after each loading, make us wonder if Blacksad: Under the Skin has been tested as God commands and how it has not been delayed until the middle of next year . Those with stomach and patience will have to learn to live between the love of the characters of John, Weekly, Smirnov and company, and the rage that does not have a polished and worthy adaptation of his name. The mechanics, too linear, easy and conservative, could have had a pass thanks to its history, which perfectly captures the essence of the comics and nails its tone and theme. Too bad there are such a number of obstacles between the player and the plot, causing us to disconnect from it and not be able to see beyond such interference. We fervently await a patch that will take away the devastating feeling of being in front of a broken toy.

It may have acceptable elements and entertain, but in general it is an experience that will leave no trace.