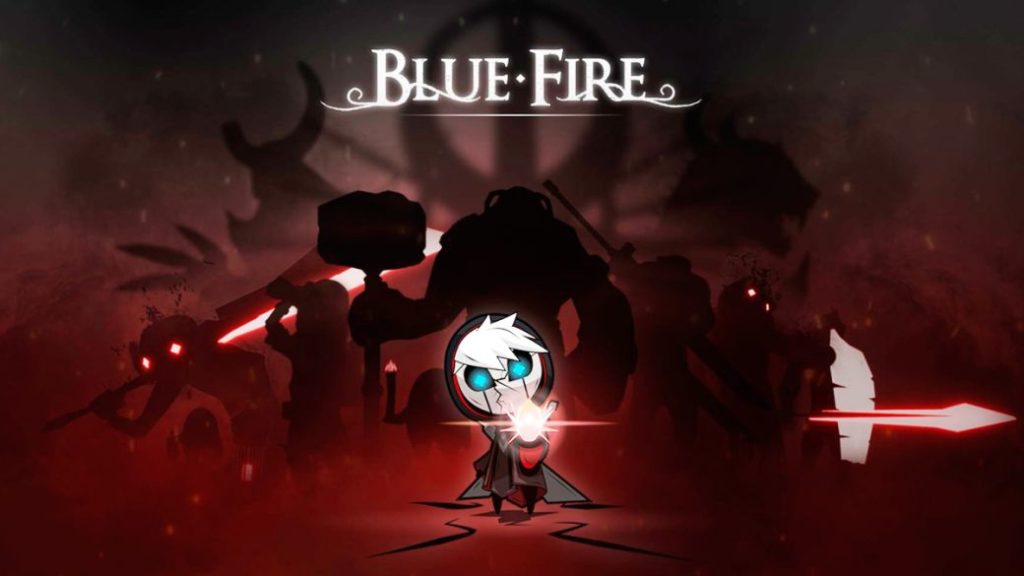 Blue Fire arrives with the promise of reminding us of the wonderful 3D platforms of the beginning of the century. We analyze and discover all its virtues.

When the third dimension began to be part of video games, many were those who dared to transfer the precision of platforms to 3D, thus giving rise to a large number of high quality titles such as Ratchet and Clank, Jak and Daxter, Banjo & Kazooie, Spyro etc. Now we have a hard time finding quality examples, so it is only natural to be happy to be able to welcome one who does the job. From Argentina, and under the name ROBI Studios, Blue Fire comes to us, a unique mix of elements that merge to create a 3D platform that is as enjoyable as it is demanding.

In Blue Fire’s own Making of, the inspiration in the platforms of the beginning of the century is recognized and the best thing is that we have felt that way. We have recovered a feeling that we had not had for a long time, since the vast majority of prominent platforms in recent years were in 2D. And it is natural, there are not many notable platforms that have wanted to face the third dimension beyond the notable Snake Pass, A Hat in Time and, now, Blue Fire.

ROBI Studios frames us on a three-dimensional adventure in the land of Penumbra, a kingdom corrupted by The Shadow until our arrival. The whole game is structured in a gloomy and desolate castle in the purest Dark Souls style, with divided and interconnected areas.

The first areas offer us the typical tutorial, but ROBI Studios forgets to give the player a progressive adaptation of the movement and control of the character. This generates a somewhat irregular difficulty curve in its first hours due to the precision that a certain area needs and because of a camera that does not help at certain moments. Fortunately, it is a small place and, once passed, the curve recovers its natural progression. 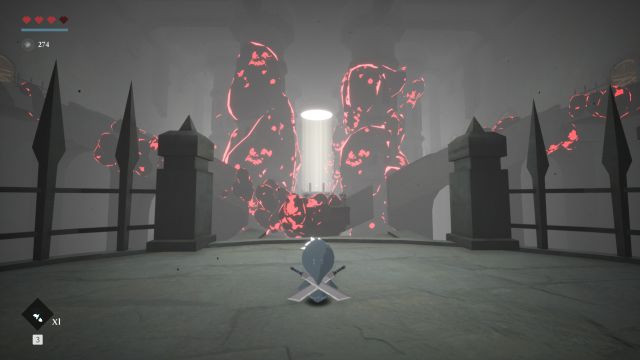 In Blue Fire we are not only facing scenarios with different color palettes, but they have provided a unique characteristic to each of them to differentiate them with just a glance. For example, the City of Stone is full of stairs and nooks to explore; o The Cemetery uses a large tower as an intermediary to access higher areas. In fact, one of the most prominent features of the game is its verticality. This particularity is applied in practically all its scenarios, thus managing to create a platform that is as balanced as it is varied. 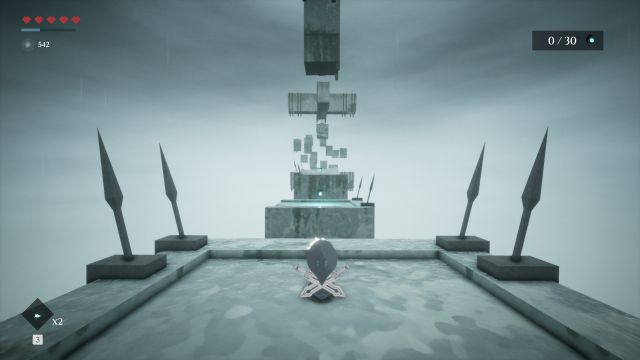 To all this we must add the challenges of El Vacío. Classified by their difficulty, these zones will challenge the skill and patience of the player to get to the end of the circuit and receive an extra heart as a reward. It is really here where we have found the highest challenge of the game in terms of platforms, creating moments of real tension and in which a single mistake would cause us to return to the beginning of the challenge. However, some sections of the more difficult levels can be circumvented as you acquire new skills and power-ups, so trying again later is never a bad idea.

All these improvements come from the spirits, beings that inhabit all the Penumbra castle. Its operation is very similar to the Hollow Knight slots, since they only allow us to equip a certain amount of spirits depending on the slots that we have available. These spirits will improve our momentum or allow us to do more damage when we perform aerial combos. And yes, in Blue Fire there is also combat. In fact, it blends seamlessly with the techniques applied on the platforms.

Improve your reflections in Blue Fire

The entire combat structure is based on the “Z targeting” of games like Zelda or Dark Souls. This successful decision generates a very satisfactory combat due to all the freedom of movement they provide us. While it is true that ranged combat is merely functional, it ends up wasting our mana reserve, which can only be regenerated by giving melee hits. This is where the really interesting lies. When not letting enemies be stunned by our blows, it is vital to learn how to use momentum to dodge faster attacks or use the shield as a last option to not take damage. Combining melee and ranged elements, and platform techniques such as momentum, conclude with frenzied and highly accurate combat. Once you get used to it, the fights are incredibly satisfying, especially the final enemies. 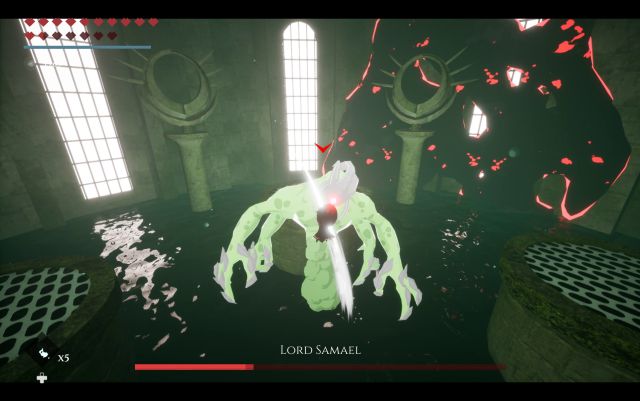 While it is true that there is not much variety in the basic enemies, it is in the final bosses where ROBI Studios captures the frenzy of the fighting. After solving a series of dungeons in the purest The Legend of Zelda style, we will have to face the boss of the dungeon. The so-called Lords will put to the test everything we have learned until then in unique combats. Although they do not have an excessively particular design, their mechanics are very varied. These final bosses require our utmost attention to remember their combat patterns while avoiding their movements, which, like music, evolve. 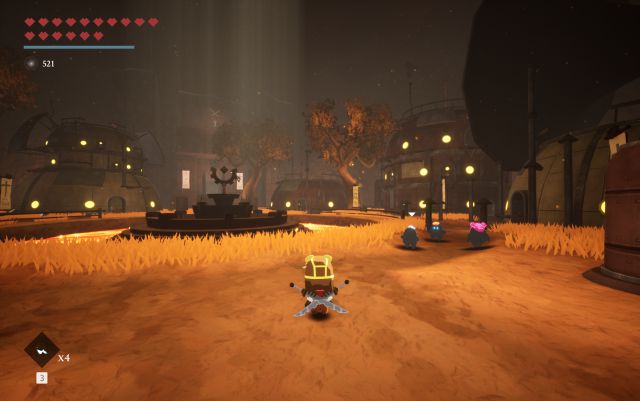 In addition to the protagonist, in our adventure we will meet other companions. We would have liked them to have intervened more in the course of the story, since their only relevance is to guide the player or offer them secondary to improve our equipment. We can also do this through the stores, a place where we can buy weapons, spirits and purely aesthetic costumes.

In one of the challenges proposed by ROBI Studios we have to go through certain areas again to access places that were previously impossible to reach. It is at that moment when you realize that both the protagonist and the player have improved together. And it is that if something we must highlight above all is the feeling of progression. 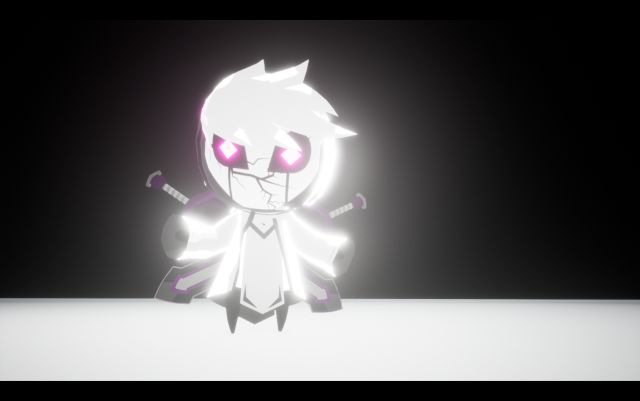 In the 8 hours (or 12 if we go for 100%) that Blue Fire lasts, you learn to perfectly combine the platform and combat to go through the entire castle in a matter of minutes. In fact, it is a game in which speedrunners will find a good challenge for the agility and precision of their action.

We cannot finish without first recommending a controller to play it. With the keyboard we played well for the first few hours, but we believe that the command will be a more satisfactory experience to respond quickly to the precision that we demand. In addition, technically we have not had any problems and its minimum requirements are not demanding, so practically anyone can enjoy the adventures in Penumbra Castle.

We really liked our experience with Blue Fire. The only thing we can blame ROBI Studios for is the lack of that innovative element capable of creating a unique element within the game that sets it apart from the rest and makes it special. However, that doesn’t take away from the fact that it is a round and very enjoyable 3D platformer. In fact, we love how it mixes features from many other games like Hollow Knight or Zelda and brilliantly applies them to the precision required in this genre. Blue Fire entertains, amuses and challenges you at all times and becomes a serious candidate to be one of the outstanding indies of this year 2021.