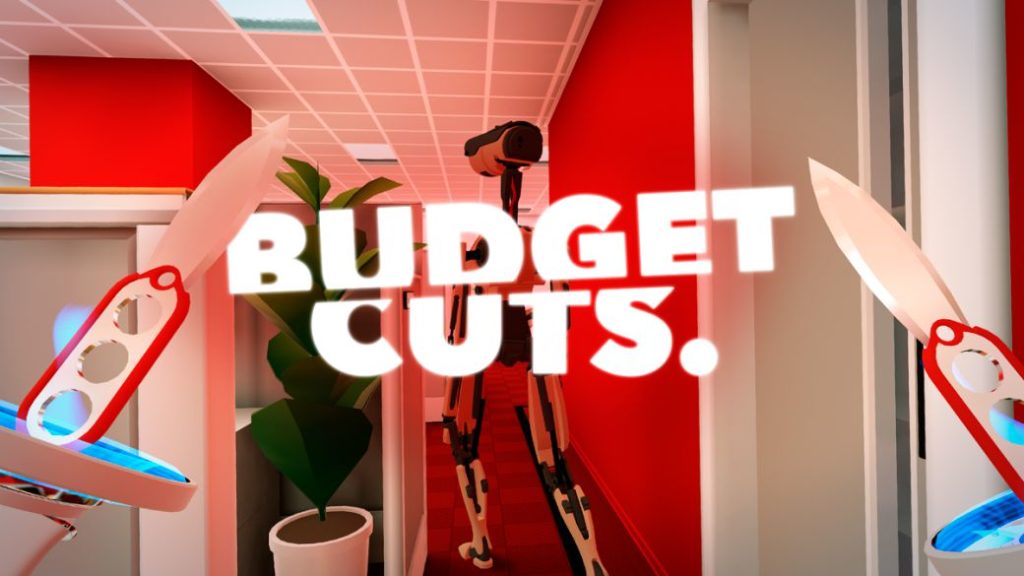 Virtual reality has not been the great Boom! in the history of videogames that was expected at first. The reasons are many and very diverse: its usability, the problems of some users that lead to bad publicity, a high percentage of games that do not measure up … Budget Cuts dodges some of these setbacks with grace and ease. For regular VR users it is an appreciable fun gadget, and for newcomers it can be a safe place to start in this fantastic parallel world. After a successful two-year journey on PC and with a second installment for compatibility in 2019, the Neat Corporation game finally arrives on the console thanks to Playstation VR on PS4.

The rush to the mainstream market of VR technology

Virtual reality, so revolutionary, was ahead of its time. It is true that it has been the desire of many for decades. Books, movies and video games have made us fantasize about a future full of parallel dimensions. The development of VR technology progressed hand in hand in several companies, and sooner or later those dreams that many of us had would come true. Perhaps one of the big problems with VR is that it was released early. The ordeal that led to Facebook’s purchase of Oculus sped up the entire process. Suddenly, research and development turned to the urgency of being the first to hit the market.

The impression that many of us had when the main pieces were on the board, this is Oculus, Vive and PSVR, is that the technology lacked a boil. For those of us who had been looking forward to the moment it was not a problem, but it was for the large potential audience. Screens with resolutions and refreshment below the threshold necessary to avoid causing dizziness problems in the most sensitive user, often bland software that focused on showing the experience instead of betting on complete and complex content, cumbersome equipment by volume, number of elements and wiring… The rush resulted in wasting a good letter in the commercial launch of the long-awaited product. 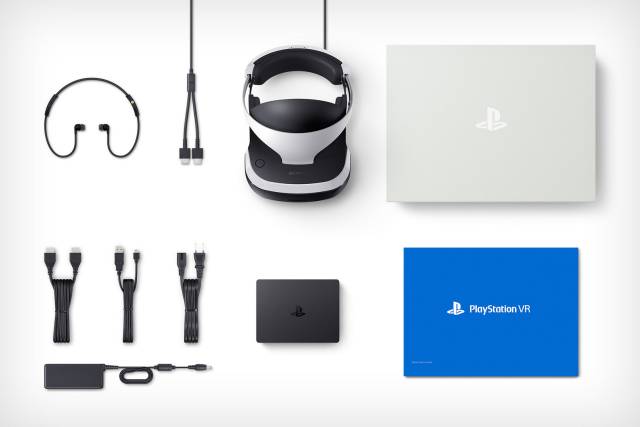 The initial impact has faded, but still many people do not know that some of the initial obstacles as well. There is still a long way to go, but it must be taken into account that the goal was not to reach the market, as the companies themselves seemed to see it. It was not about the 100 meter sprint but one more stage in a race that was actually a long distance race. Today prices are much tighter, some equipment has been simplified in usability by reducing volume, parts and wiring; the screens have much more definition and the refresh rate increasingly touches the appropriate figures. The software, for its part, is supplied by titans such as Skyrim or Fallout 4 who earn integers with their helmets on, and already has its own masterpieces, such as Half-Life: Alyx. (that treasures one of the very counted ten that have been given in this house). In between there are a lot of filler titles but also small, medium and large works that ooze quality. Budget Cuts fits into one of these sections, let’s see which one.

Neat Corporation’s game is not a Triple A, its proposal is more modest, but efficiently focused. It is a first-person stealth game, one of the pillars on which virtual reality moves comfortably. And speaking of moving, here we do it by teleportation. This solution, which is normally criticized by those of us who want to move as freely and comfortably as possible on the virtual plane, but usually defended by developers to avoid dizziness in certain users, is perfectly implemented in Budget Cuts. In a few minutes we realize that it is the best possible option. An option that also gives us a lot of possibilities when planning our movements.

Teleportation is perfectly integrated into the game mechanics, and is also supported by a classic, also modest in budget but full of ideas Portal. When we do the usual pointing to a place to teleport, a portal opens through which we see what we are going to find. In a stealth game this becomes a great find and leaves the usual peeking around a corner in diapers. Teleportation is assimilated as an essential game tool, because it allows us to plan the strategy to follow to solve the objective of the phase. These portals give us information about part of the room that we cannot see from our position, they show us if there are enemies and, if so, they allow us to predict their path; We can study the place where we will go in search of the secret file, the card to open that closed door or the weapon on a table that will come in handy to take down that enemy that we have just seen pass by. Magnificent. 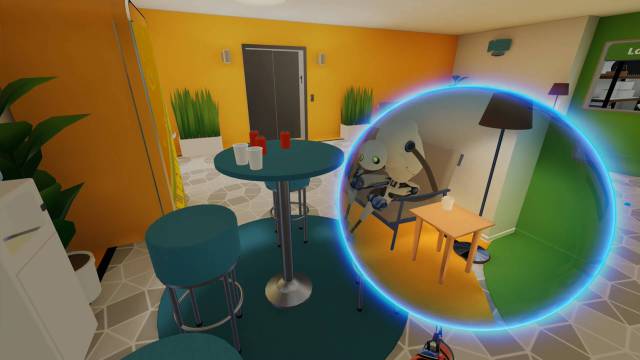 The hassle of having PS Moves for VR users can be a handicap, but its use proves essential once we test its implementation. With the lollipops we can easily activate our essential tools, such as the teleportation gun, or take objects and fit them into a practical radial menu. Everything works precisely, but we assure you that in times of stress, of authentic madness, fleeing or facing enemies, for example, it will be easy to screw up. And this is also very good. With the game showing that nervous chaos on the television screen, the laughter of family or your friends is guaranteed.

Well, yes, we have gone around with the title of this section, but more than anything because the Czech writer did not show much humor in his writings that we say, and here it is in abundance (voluntarily and integrated into the context, or involuntary due to the situations we have described). Yes there is in Budget Cuts the coldness of a bureaucratic machine that treats the long-suffering protagonist with total disdain and coldness.

Like Neo, we receive a call at our workplace that tells us to get out of there because they’re going to get us out of the way. We know that some companions have disappeared in recent times, so we have no choice but to trust our particular Morpheo. As in the Matrix, we received instructions from our mysterious interlocutor on how to move through the network of floors and offices, but Neo would have liked to have our resources. Here we will not have to juggle on the ledge of a skyscraper, we will directly teleport to the opposite building taking advantage of the gap that an open window offers us. Yes, we must move with great care between clonic work spaces, avoiding the men in black represented here by archetypal robots. Design and graphics enter the scene.

The graphic load that in virtual reality means loading twice, once for each eye, what we have in front of us, often translates into sacrifices. These can be sharp, polygonal loading in environments and characters … Budget Cuts puts back on its part the limitations of the support setting everything in aseptic, clean, very office settings, and robots that do not need high polygonal loading that if it would be necessary if the characters were human beings. Everything seems to correspond to a scrupulous planning that has directed the artistic direction to the greatest possible exploitation of the available technical resources.

The result does not dazzle for your imagination, but for its good implementation and efficiency. The whole is therefore very coherent, so much so that we do not miss other types of more complex or elaborate graphics. The light weave that is packaged with this art direction is the best possible solution. When we have been playing for a few hours, it will seem the only one, too.

The fact that it is an independent game brings with it some loss. Although it is translated in its main texts, we miss that the localization is complete. We miss, for example, the funny and ironic corporate comments that sound from time to time over the public address system, complementing the lore of the game. Nor did we enjoy the translation of the multiple posters with the motivating (and outrageous) slogans of the company that are scattered around the offices.

Finally, the inclusion in the main menu of an arcade that we can access from the beginning is appreciated. In it we can play fast games at five levels, registering our scores in the old fashioned way. It is convenient to access the arcade machine once we move with ease in the game. You will be surprised how quickly we can complete these levels looking to beat the highest scores on the clock. It’s never been so much fun to get fired from your job.

Budget Cuts is an incredibly well-optimized standalone game in terms of resources, approach, and execution. The Swedish Neat Corporation manage to do their part, without apparent effort, both the tightness of their budget and the very demand of virtual reality resources. It is a stealth game with a strong humorous and carefree touch. Sharing on television the moments of tension and chaos in which we hysterically throw coffee cups or staplers at the heads of our pursuers will ensure the laughter of family and friends. Its fantastic implementation makes it accessible to gamers who have some respect for virtual reality. Teleportation movement not only prevents dizziness, but is freshly and brilliantly integrated into the gameplay itself. Budget Cuts is one of those titles that justifies virtual reality and helps it establish itself where it deserves.