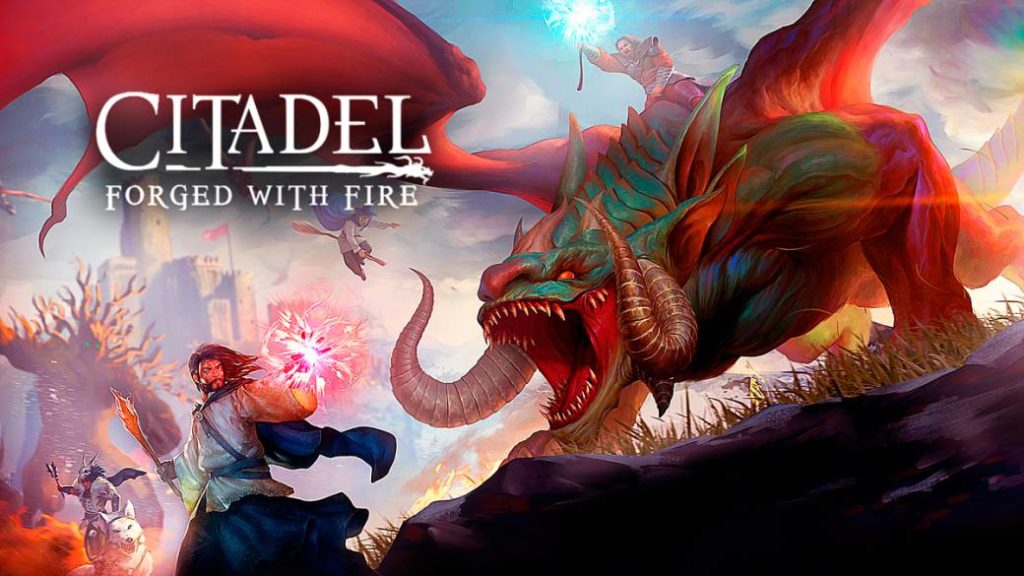 The creators of Slenderman surprise with survival in a persistent universe full of magic and especially accessible to new players.

One of the genres that has benefited most in this generation of consoles is that of open worlds, especially the persistent ones, something almost unprecedented in the previous one. Not only the most traditional MMOs, with representatives such as Final Fantasy XIV or The Elder Scrolls Online, once experiences only worthy of PC, but also with what we already know as survival, and that we have seen in the form of Conan Exiles, ARK: Survival Evolved or this Citadel: Forge with Fire that we have to talk about this time. Coming from the hand of Blue Isle Studios, famous for being the creators of the terrifying Slenderman, this time they offer us a radically different proposal not only to their previous work, but to the titles with which our protagonist competes, and in which magic It is the hallmark.

Some have to have, obviously, to compete with such charismatic aspects of their rivals as the universe of the barbarian Cimmerio or the dinosaurs, and it has it not only in this magical element of which we speak, but also in a notorious accessibility for those who are not familiar with this type of game, or directly, want to skip some of the most repetitive mechanics, and therefore, more boring.

In fact, the start of Citadel: Forge with Fire is not excessively original, and when we say "start" we mean the first five hours. After creating our protagonist with a limited editor but capable of creating absurdly disproportionate characters – although not at the level of Conan Exiles, and you know what we mean -, we emerge from the fire – hence the name – at a point on the map to Choose from three, and from there, the first NPC that we find will begin to assign us the first missions that do nothing but the tutorial times. Patience with them, they are extremely simple missions, the typical ones of “look for this object and create this one”, and we are only going to find some difficulty when it comes to finding any of them, since they can be somewhat searched in the environment. 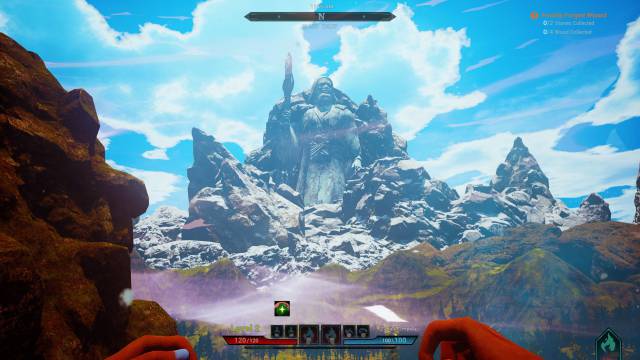 When we talk about this tutorial we have to make it the first weakness of the game, since it explains some of the most obvious aspects, and makes us familiar with the elementary mechanics, but when the game gives you absolute freedom you feel unguarded at the time of build, since you lack sufficient knowledge and should have been given to you. Far from it, the trial-error method is dominant in the first moments when you start building your home and various useful structures. Surely this is a point to improve in future updates, since that feeling of loneliness and having to look for life is inherent to the genre, true, but Citadel: Forge with Fire wants to be more accessible, and with this shallow tutorial of course do not get it.

What does welcome is a beautiful and colorful scene, very vivid, which makes you forget almost completely a visual section just right. Surely we talk about one of the most beautiful persistent open world survival in this section, and walking on foot – or a broom later – is an experience that is certainly worth mentioning.

One of the most satisfactory sections of Citadel: Forge with Fire is undoubtedly that of construction, although it may seem ironic considering what we have said before. Yes, it does not give you many facilities when it comes to learning the basics, but when you do, you are able to build true monstrosities in the form of a castle or fortress, and why not, visually enjoy those that other players have also created. It is very satisfying to see how your poor initial knowledge does not give for much more than a floor and four badly laid walls, a few hours after crafting and experience, you can build an almost impregnable fortress. 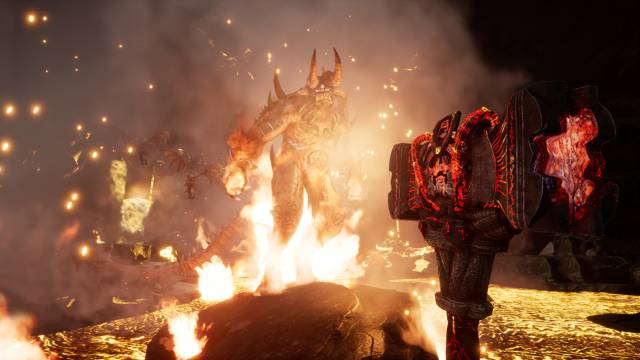 Of course, we know that in the process we will have to spend hours cutting down hundreds of trees, but fortunately, resources and materials can also be found looting enemies so much – even if it is a bit absurd to find wood or stone in the body of a wild boar – like chests spread all over the stage. Incidentally, we do not have to spend skill point as if there was no tomorrow, since when learning to build wooden structures, for example, we already have from the beginning the entire full range: ceilings, floors, walls of various ways … Not everything is perfect, yes, and we would have liked the game to be more precise when it came to placing all these structures, having to go around ourselves and move the right stick until we find the perfect position.

Before we talked about crafting … We can collect resources as usual in the genre, that is, by hand with our ax of stone first, of steel later, or through one of the spells that it is possible to create- of what we will talk more ahead-. Do not believe that it will be necessary to wait dozens and dozens of hours until it can be done, since it is an early possibility and by the way, and most importantly, that makes the life of this survival extremely comfortable and less tedious. That said, this accessibility is also shown in a section that is not much less trivial, and is the absence of the obligation to seek food or water. There are some who will say that one of the most basic aspects of survival is eliminated, but there will also be many others who will appreciate not wasting time in mechanics so simple but also so repetitive. Yes we can look for food and drink, obviously, but not as a need to stay alive, but to recover health or obtain some temporary benefits in some parameters. 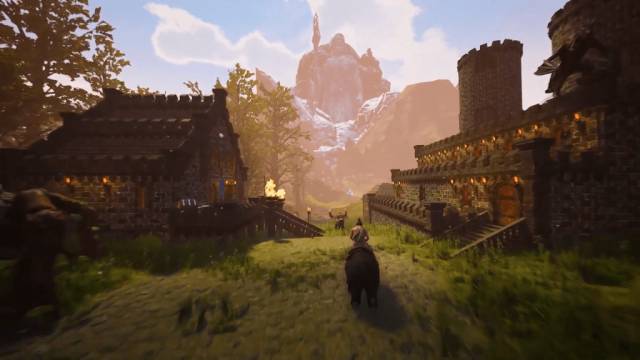 This simplicity is also evident when looking for resources, and it is that as if it were Minecraft, the same object will serve to chop stone, cut down trees or even realize the enemies that we can cross. Is this positive or negative? It depends on each player, but if what Citadel: Forge with Fire wants is to offer accessibility in this and other sections, it achieves it once again, which in our opinion is something to stand out for good.

As we said before, if something differentiates Citadel: Forge with Fire from the rest of similar proposals is the weight of magic, omnipresent. The close combat is not well executed, it is simple … but for that there are spells, whose creation is something that will cost us to dominate – we did not expect less – but once we do it will be what we enjoy most. Collect objects, essences, combine them, experiment … It is a wheel and a process that will be repeated many times during our adventures in the game, but it will be fun. 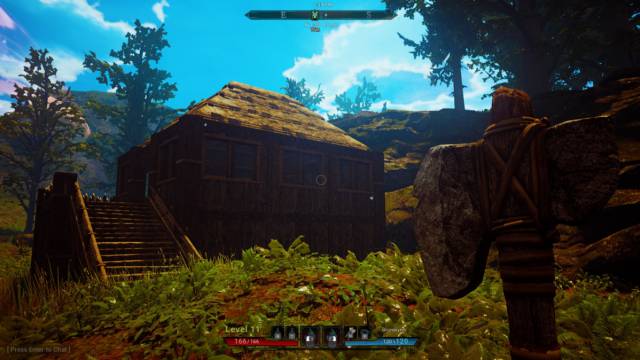 As we say, we can obtain essences – of light, of fire, of water, etc … – from enemies, bays mysteriously scattered around the stage or stealing them from other players if we play on a PVP server, which will be the basis of each spell. To this we must add the chosen school, which may be specialized in area spells, projectiles, healing, etc … Let's combine it with a random object and get a spell that can be devastating … or not. We can always use arcane art, which ignores essences, but adding these will achieve better results.

It is not the survival genre that is especially accessible to those who want to try it for the first time. Depth, complexity, demand, repetitiveness … are some of the virtues and some of the defects -depends on the point of view- that the majority have and that throw back the little patient player. However, if we talk about Citadel: Forge with Fire we find the proposal that most welcomes the new player with the elimination or simplification of many tedious mechanics, but ironically, it lacks a tutorial that provides enough knowledge to master it in the early hours, forcing the player to have a lot of self-education. Be that as it may, this accessibility with the very personal weight and presence of magic make this game something different within a genre that begins to be populated in a massive way with clonic titles, but that finds in Citadel: Forge with Fire an alternative to have in mind and at the height of Conan Exiles or ARK: Survival Evolved.