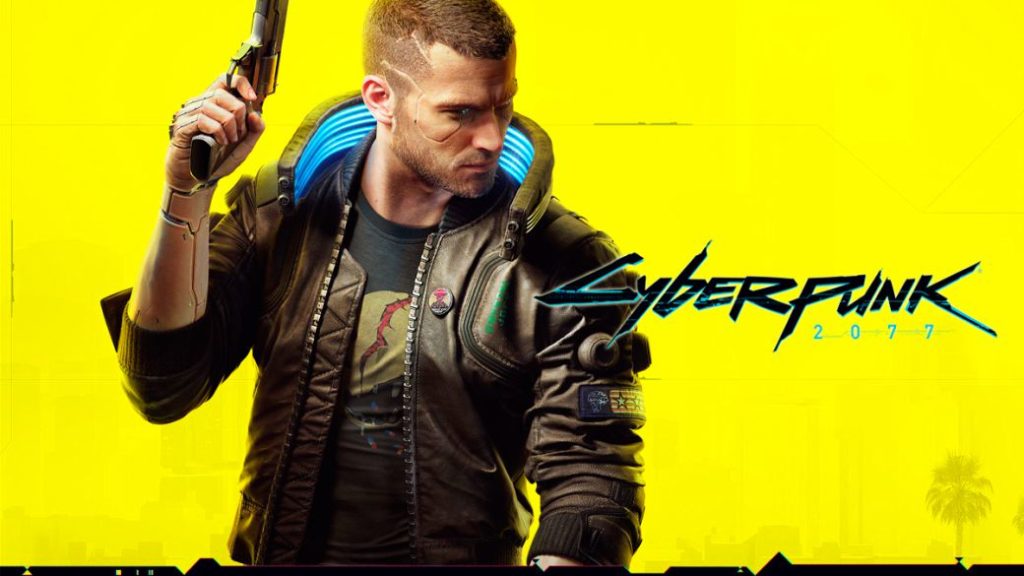 We analyzed the PS4 and Xbox One version of Cyberpunk 2077. Night City does not show the same face as it does on the other platforms. Missing work.

Note: the Reviews and the note correspond to the versions of PS4 and Xbox One. If you want to read the complete Reviews on PC, click here. We will carry out an exclusive assessment of the new generation once the dedicated port arrives.

The closing of the generation that has accompanied us since 2013 has not been marked by the arrival of PS5 and Xbox Series X | S: Cyberpunk 2077 has. The CD Projekt RED megaproject has been a silent companion throughout these 7 years . He was always there, present in the second row, flying over platforms where the highest expectations were placed. The promotional tour was not exactly short. Keanu Reeves spearheaded what promised to be a brilliant arrival. In all these years we have not seen any image that corresponds to a version in development of PlayStation and Xbox. The doubts were on the table.

Cyberpunk 2077 crossed the finish line on October 5. Any video game puts an end to its development when it enters the gold phase. That version 1.0 in each physical copy became the entry point for a potential audience of more than 100 million. After its multiple delays, there was practically a month left to receive it on November 19. Everything fell apart in a few weeks: the date was changed again. This time the study aimed directly at the basic models. “The game is ready on PC and works great on the new generation of consoles, they could be released on those platforms. However, despite the fact that the game has been certified in the current generation by both Sony and Microsoft, some final optimizations in such a massive and complex game require a little extra time ”, commented Adam Kicinski, one of the CEOs of CD Projekt RED. “It might sound unreal when someone says that 21 days can make a difference in such a massive and complex game, but it really does.” 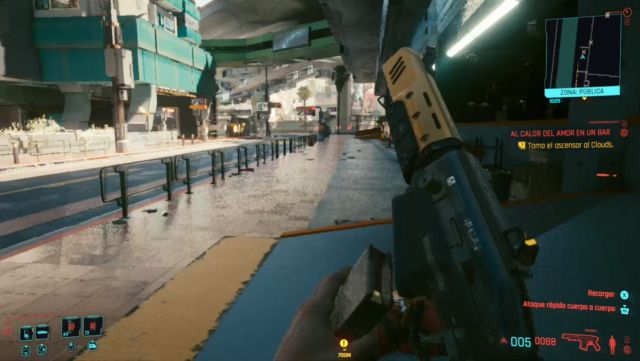 Along the way we could see (finally) what it looked like on consoles. Night Wire Special was the frame chosen on November 17 to show the Xbox One X and Xbox Series X versions. In the footage, it already hinted at some performance problems in the first, while the new generation seemed to run without problems. The company was omitting the basic version for no specific reason. Life went on. A week later they did the same on PlayStation 4 Pro and PlayStation 5, this time without the parafarnalia of the broadcast. Again, the base model was omitted; the same old ghost was being generated again.

Kicinski appeared again, this time in the financial results corresponding to Q3 2020. During the meeting, he assured that the game “will perform very well on each of the platforms.” Specifically, he maintained that it worked well on PS4 and Xbox One, especially considering the magnitude of Night City. “Of course, a little worse than in the [consolas] pro, but surprisingly good, ”it read. Words that fell on deaf ears once we reached December 10. 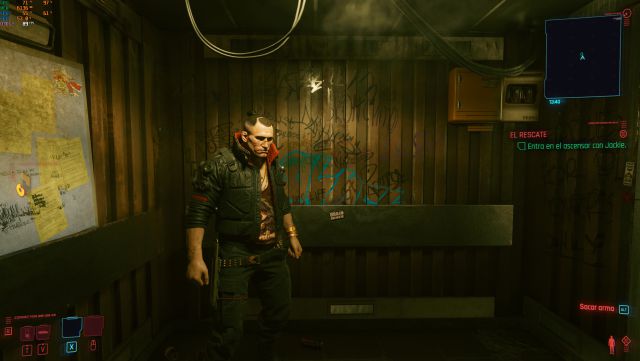 And is that Cyberpunk 2077 is a completely different game if we put the PC version face to face with the console version. It is night and day in a Night City that stands as the undisputed protagonist of your entire stay in it. The face it shows on PS4 and Xbox One is from an unworthy state, as our editorial coordinator, Salvador Fernàndez, said in one of the portal’s opinion columns. Of those 8 million copies reserved between physical and digital formats, those console users who have placed their trust in the work they have been doing all these years are included. Shattered confidence once you discovered what was behind the edit menu.

The city without limits that Francisco Alberto Serrano portrayed in his Reviews is at your fingertips on your computer. And so is, naturally, on console. The problem is that these do not show the herculean work to capture the Californian megacity. Moreover, the user is the one who must make the effort to invest 40, 50 or 100 hours in an experience full of technical problems. Problems that denote the obvious: Cyberpunk 2077 is too big for hardware dated 2013. The Reviews has been done based on update 1.04.

Xbox One and PS4, a real disaster

There are not enough qualifiers to describe the gaming experience on Xbox One. It is a port that makes the player believe that he is an automaton. Without blinking, without feeling, just take the remote and press buttons. Anyone who sees this version of Cyberpunk 2077 live knows that it is a complete disaster, regardless of their technical knowledge. The problems it raises are the antagonists of any open world game worth its salt. 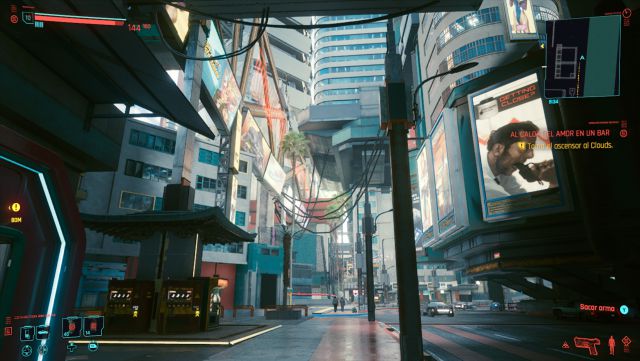 A session of 10 minutes is enough to clarify that it is not possible to play in this state. For starters, performance. With a frame rate locked at 30 frames per second, it transmits at all times that it is below that figure. He does not manage to maintain his goal for half a minute. Even navigating the city is uncomfortable, annoying. It is easy for you to end up with a headache; leaves you feeling really unpleasant.

On the one hand, the resolution. Very low by today’s standards, which together with the antialiasing applied creates a blur effect. During a shootout it becomes difficult to figure out who is who among the enemies. I’m not kidding: between the loss of sharpness and the lack of charge in the distance, the enemies in the distance are polygonal masses that lose effects depending on what the game wants to show you. 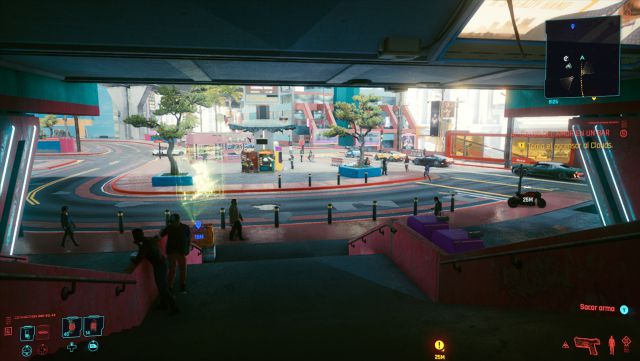 During our tests we wanted to do the typical Night City police intervention, those easy assignments where you can take down criminals in exchange for reputation. In other versions we would act normal, taking a close cover, preparing the weapons and starting with a grenade. On Xbox One you can’t. There, when you draw a weapon in combat, you don’t know what it is. The game mismanages memory, and some elements do not appear physically until after a few seconds. Happens with all inventory. You get to shoot an invisible void that is generated in our hands. All this at 20 fps (or less), without shooting effects, with the animations of the enemy limited in speed and without knowing where the shots you receive are coming from. That is another: the effects appear and disappear as they want. They do not follow a logic.

Sometimes it also happens that you throw a grenade and you don’t know if it has exploded. The damage is applied, but the visual explosion spawns seconds later. The sound fails … and not a little. Cars at times stop making noise, other characters remain unmoved until after a few seconds. It is a disaster, without palliative. Because the current state of Cyberpunk 2077 in this model does not meet the minimum conditions to have been released. Point.

We insist: in static image there is an abysmal difference compared to putting yourself at the controls. The image quality is extremely poor, reflections create artifacts on surfaces that make you feel like you’re stepping on gravel. Illumination flickers at times. You are walking down the street and the geometry is generated at 2 meters. It doesn’t try to hide the popping. The problems in the reappearance of citizens persists. You navigate through a ghost town, it does not even come as a reflection of the Night City that it is capable of offering on other platforms. Disastrous. It is difficult to explain how any quality control has been able to pass.

The tonic remains on PS4. Somewhat better in combat, but it is common to see it below 30 fps. It is especially noticeable when you move around the city with a vehicle. In addition to the absence of a good number of characters, there are the jerks typical of a framerate that does not give of itself. It is a real shame.

Xbox Series X and PS5, differences and options; waiting for the next gen port

The story changes completely when we dive into the Xbox Series X version. Despite not having (yet) dedicated enhancements that take advantage of its hardware, both the gaming experience and options are one step ahead of the base model of One. As has emerged these days, in it we have two graphic settings, which prioritize performance or visual quality. The first releases the framerate at a maximum of 60 images per second, while the other locks it to 30. The really interesting thing about prioritizing in fluency is that it manages to stay practically at all times in its new objective. There are falls, true, but in very specific moments and that do not cloud the way you get around Night City. 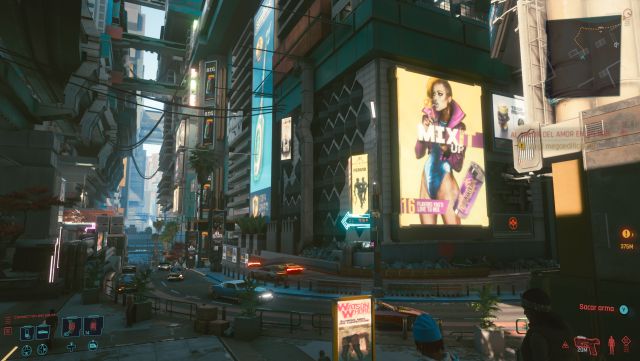 All the game mechanics work really well on it. Shootings, hacks, the mere fact of walking through a square … translates into a Cyberpunk that is close to what you can do on a PC that allows it. That in terms of performance. Of course, the visual concessions are present. The loading distance of the shadows is almost the same as on Xbox One S, only that the modeled ones do it at a greater distance. The reflexes are quite low; the resolution drops to 1080p. It looks, at times, blurry due to the amount of post-processed filters it has. There is a lot of room for improvement.

On the other hand, the quality mode improves the presentation. The rise in resolution is palpable. Assets appear with higher quality, but it continues to suffer visual errors, such as textures that never finish loading, shadows that flicker, models that do not offer their true potential … It is a port that does not surprise, that shows another generation. Logical, on the other hand. It remains to be seen how the dedicated edition will perform. The amount of characters generated on the screen is more than enough: there is a similar atmosphere on PC in this sense. 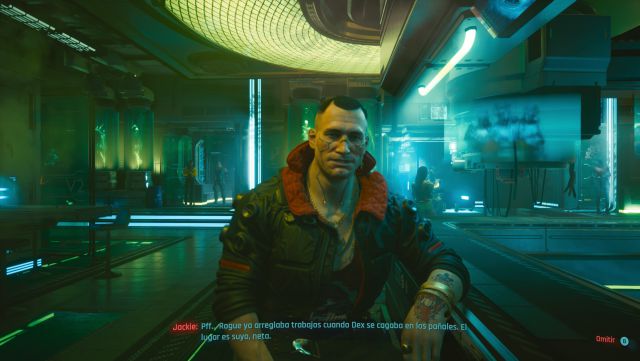 Our passage through Xbox Series X makes it clear that it has allowed Cyberpunk 2077 to show itself better, but far from what it can do. Performance mode is the option we recommend. We must emphasize that it is the only version that has these graphic options. The only selectable visual changes they share are in the image filters, such as chromatic aberration, motion blur, film grain, lens flare, and depth of field. If you want to make the screen clean (even on PC), disable them. In Xbox Series X we find freezes of several seconds. Then it returns from the point where it stopped. It is annoying.

The PS5 version, as we said, does not include the graphics modes of Series X. Basically it works at 60 images per second, more stable than in the Microsoft console. It is especially noticeable when we are in a vehicle at high speed. The visual quality is similar between them, so it is a correct way to discover Cyberpunk 2077 today.

The current situation of the version of Cyberpunk 2077 in the base models is very sad. The quality of the game is hidden in a port that does not do justice to the narrative, playable and design efforts that can be appreciated on PC. The state of the game on PS4 and Xbox One S is unworthy, especially the latter. We hope that the relevant corrections will arrive in the future. On the other hand, the backward compatible version receives modifications on PS5 and Xbox Series X | S, which makes the game better while waiting for the dedicated next gen port. There is room for improvement, of course, but being able to play it at 60 frames per second is a welcome option. Meanwhile, Night City is night and day depending on which platform you are on.

It could be but it has not been and after spending a few minutes with it it will be filed on the shelf to never play it again.