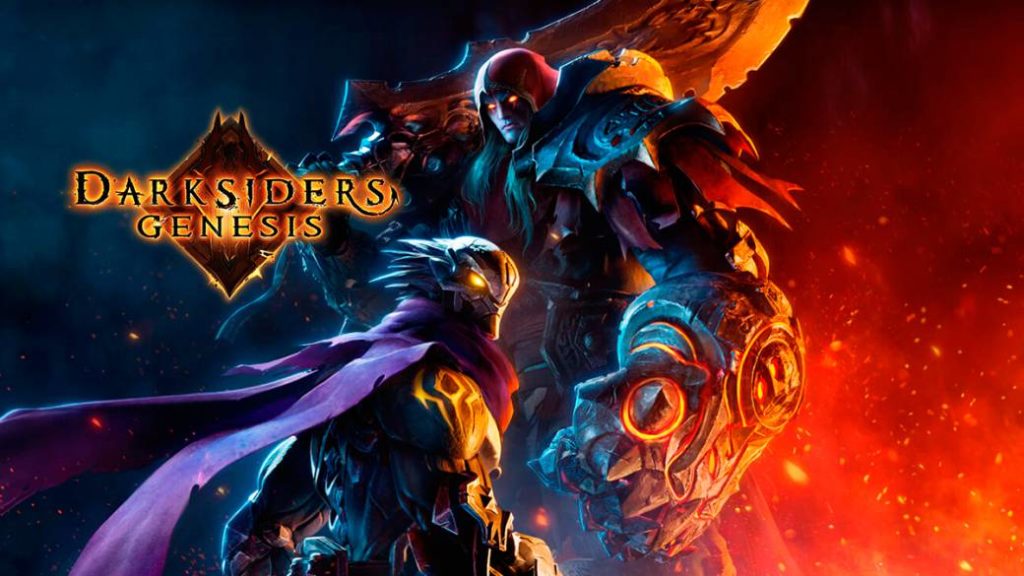 This is the fourth installment of the saga and prequel to it.

It is not, surely, what was planned, but rarely in life do things go as planned. From the original Darksiders it was clear that Vigil's aspirations with the saga were at the top of a great videogame production. The clear inspiration in Zelda, something that very few try, pointed to the ambition and confidence of the studio, also armed with the artistic talent of Joe Madureria to give personality and impact to the design of the characters. The idea was four titles, one for each horseman of the apocalypse and each one more ambitious, as was proved in the jump from the first to the second – another question is whether it was better, but the jump at several levels was evident.

But those plans crashed against the closure of THQ and Vigil had to close its doors to the regret of his workers, who had already demonstrated by active and passive that they were a hugely cohesive group with a lot of team spirit and that they enjoyed working together. That seemed to be the end of Darksiders, but in a new twist of fate the company "resurrected" and its IPs gradually returned to life. A core of Vigil members had joined Gunfire Games, a new studio, while Joe Madureira helped set up Airship Syndicate, another group with which to give life in the form of a video game, via Kickstarter, to one of the comic projects of the artist: Battle Chasers. The former were responsible for Darksiders 3 and, since everything is cyclical, Airship had the opportunity to work on this Origins, a prequel that also serves as an introduction to the fourth rider: Strife. 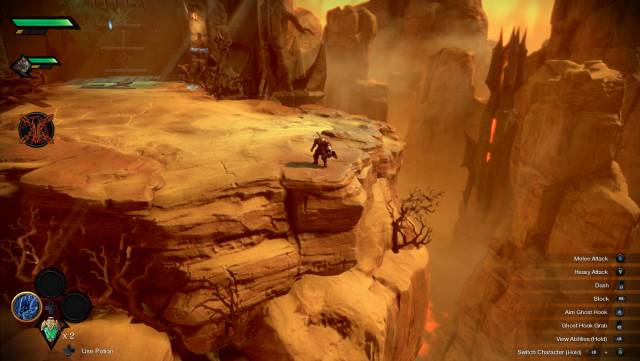 And as we said, surely it was not the idea that this fourth installment was presented in this way. Already with Darksiders 3 it was clear that the new team did not have enough resources to continue the scale presented in the second part. But the room directly changes gender and is firmly established in the Hack’n Slash of the Devil-style aerial camera, which makes it a rare avis within the saga, something very different from what it has pretended to be. There goes the first warning, those who look for echoes of the design of dungeons of the first, or of the superb aesthetics and world building of the second, will not find it here: it is a game of a smaller, more concentrated scale, and although makes meritorious attempts to introduce recognizable elements of the saga within the limits of a genre with a one-dimensional reputation, it is still different from what other Darksiders have been.

This is not necessarily bad, just the obligatory warning for fans of the saga – who on the other hand are surely not blind and have already noticed before reading anything. And since it is not healthy to criticize a game for what it is not, or for what it cannot be, here comes the important thing. Darksideres Genesis is a competent and entertaining Hack'n Slash, especially attractive for those who enjoy the cooperative (and look for a local cooperative, that rarity in our days), with a good artistic section, an excellent soundtrack and decent wicker to enjoy it. 1X hours that can last if you are fond of the genre. Similarly, if you are a fan of the genre you can also check first-hand their seams, particularly in terms of depth and variety of characters, skills and enemies against the most powerful alternatives of the genre today, such as Path of Exile or Diablo 3. 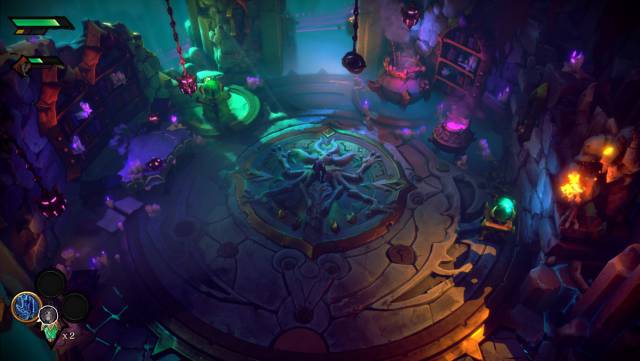 The story serves as a prequel to Darksiders and supposes, as we had commented, the appearance of the fourth horseman of the apocalypse: Strife, which pairs in a celestial “buddy movie” with War. In fact, the scriptwriters clearly had in mind classic movies of the genre like Danko: Red Heat and others of the cut: one, a soldier with nerves of steel and little sense of humor that obeys orders, another the loose verse of the group of four, a disembodied murderer with a dark past that faces borderline situations with the click in his mouth. The dynamics between the two are entertaining, with some funny dialogues, although the sense of gravity and self-importance of the series is a bit lacking. Everything in Genesis is lighter and more casual, without that gravitas somewhat forced from past deliveries, which although it is true that it could be difficult to digest at times, was also part of the charm of the series.

The game follows a well established formula. We will advance through a marked story, completing episodes. Some will be maps of considerable size to complete, others will be clashes with final bosses. Once completed, the maximum difficulty mode will be released and we can concentrate on the challenge of creating the best possible characters. The normal difficulty is quite affordable, just requires repetition and also has some difficulty peaks that are appreciated so that it does not fall into monotony. Meanwhile, the maximum difficulty mode is an adequate challenge for those who want to surrender to the pleasures of grinding, although understanding that Darksideres has some limitations. 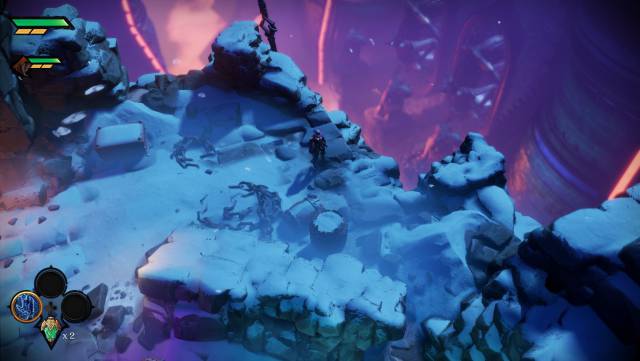 For starters, the obvious: there are only two characters, so the choice of styles is quite limited. The good news is that we can alternate between them at pleasure at any time, which gives some of the necessary variety to the game. But both are set in very marked combat styles, so in general there is not much variety or possibility of alternative styles. Guerra is a tank capable of enduring punishment and performing massive damage in melee and around it; Strife (or Fight if preferred) is a gunman with little resistance, capable of moving quickly and attacking continuously at a distance.

Since their combat skills have a linear progression and there are no objects to equip them to customize them, the evolution of the characters is quite flat. The personalization comes through a wide tree of spheres in which we can equip souls of the monsters with which we end up in combat. Each of these souls has bonuses and three different types of tier, which we will gain by farming more of those creatures. Some bonuses are simple increments, others provide variations and extras that can be useful, although more than chasing builds, here what is to gain experience and kill monsters until we get strong enough. As we have said, there are no huge changes between what we do with a character at the beginning and what we do at the highest level, the basic dynamics are the same and that is not normal in the genre. 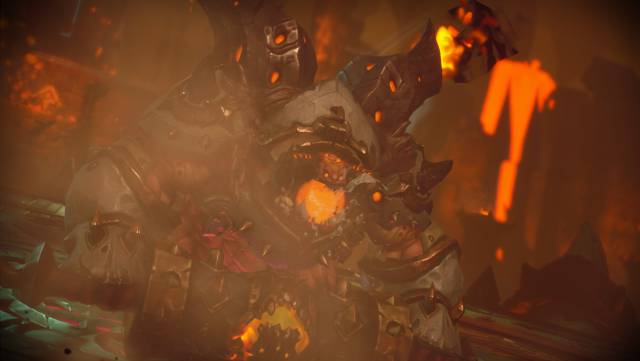 What saves him somewhat is the dynamism of the combat system. Far from being a game designed for the mouse, in Genesis the pad is advised and the control reminds more of what a Darksiders would be: with direct control of the character, jumps, some platform-not much, just enough to not be a nuisance -, combos … It is not here to have many skills, the fan is quite limited in fact, but to use them properly. The interesting thing comes from how dynamic combat is and the synergies that are created between different facets of it. If we can make a combo at the end of the enemy's life, we can press a button to make a finisher, which not only looks good but also gives us a useful invincibility window. If with Strife we ​​shoot repeatedly, his anger bar will catch fire and we will have unlimited and increased firing of any type of weapon for a few seconds – normal ammunition is unlimited, but the special one must be reloaded – We can even alternate with special movement between the protagonists, so that its constant rotation is an advantage – although we can also, almost totally, play with only one of them if we prefer.

The only equipment option available is in the runes of the War sword and in the ammunition of the Strife guns, which we can select at any time through a radial menu. Guerra can change his sword so that he is able to drink blood from enemies to regain health, or to mark them and explode when they die, marking in turn those around him – very satisfying, although the classic is missing explosion of bodies. Strife can equip bullets with charges to generate large impacts, or electric bullets that jump from one enemy to another – especially useful for situations with many enemies on the screen. In high difficulty modes it is convenient to alternate between all these options to achieve the necessary versatility with which to get out of situations, but in normal mode it is usually more a matter of preference and of changing to have some variety.

The presence of some puzzles, very light, ends up conforming the unique proposal of Airship Syndicate, a little in no man's land, which tries to wear several hats and does it with dignity, although not to the point that it can be considered height of the best. With more characters – perhaps the four riders – possibility of equipment and more customization options for the character, I could set foot in that league, but it is clear that those heights were not within the limits set in this project. All in all, we must insist that the pack is complete enough to be a recommended purchase: both the main mission and the sand mode – with waves of enemies of increasing difficulty – will keep us entertained for quite a few hours, and complete the game in the mode Maximum difficulty is a good challenge, so there is fabric to cut for lovers of the genre. 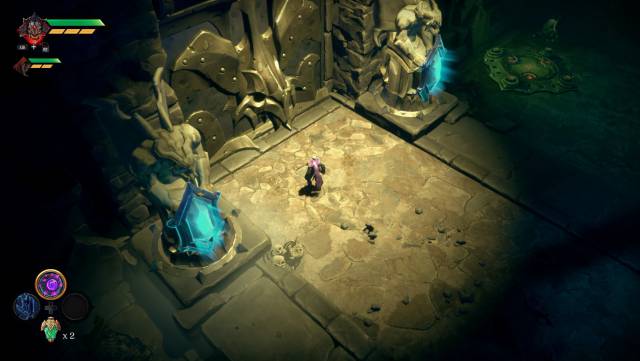 Special mention to the audiovisual element, Genesis is very colorful, knowing well how to take advantage of your camera to show expansive scenarios that span beyond the map we travel. There is a good variety of them, some really striking and endowed with a remarkable artistic grace. The design of the characters that mark the saga, the use of color and illustrations by Madureira to drive the story – in the absence of kinematics – give the game that pleasant air in the eyes characteristic of the works with the mark of Joe "Mad" . There are times when the use of effects leaves us somewhat blind in battle – but it is somewhat accepted in the genre to some extent – and there are some uses of perspectives and cameras that can cover some important detail on the stage, but the General level is good. And that of the soundtrack, as mentioned before, is very good, with all kinds of high-level melodies that would not have come apart in a larger project.

Darksiders Genesis is a good way to save furniture and offer that promised fourth game that just introduces all riders. It is not a title that elevates the saga, nor takes it to new frontiers, and surely the very fans would wish that Strife's introduction would have been more apotheosic, or at least more in the line of other deliveries. But it is not reprehensible that the four games in the series drink different influences and have their own personality, rather than being simple sequels; It gives a certain originality to the whole. Genesis is less ambitious than the third part, but considerably more solid and better finished, which is not a bad compromise, although it leaves us wanting it to be bigger than it is – even in this style of Hack'n Slash -.