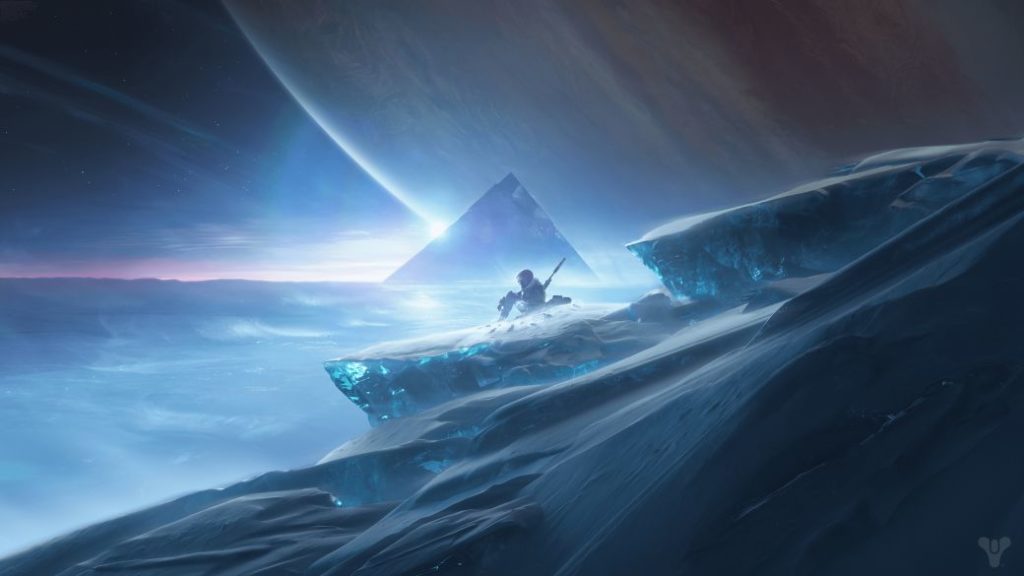 We analyze the third major expansion of the great Bungie title, Destiny 2: Beyond the Light. A new starting point begins in your universe.

Beyond the Light takes special prominence around the Destiny universe. This year we are not only facing the great content capsule for the next 12 months, but it has brought with it sensible changes in the present and future of the game. The focus has shifted towards a concentrated Destiny 2, far from the limitless expanse we’ve seen thus far.

This third expansion sets a precedent in several elements that needed to have been defined long ago, at the same time that it raises some questionable decisions. More than ever content is felt that comes with the promise of taking the desired shape through the seasons. This was our visit to Europe. 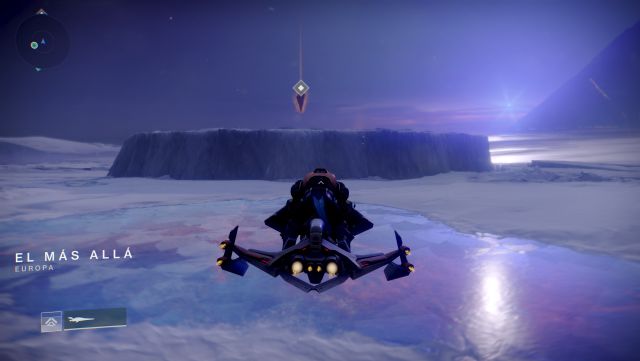 Mysteries under the snow

Nobody who has immersed themselves in the background of Destiny doubts its quality. The Grimoire has always been the compendium where our actions in the world have made sense. Underneath that epic layer that surrounds the adventures, there are hidden stories that are worth discovering. Everything happens for a reason, although the game itself does not have the ability to narrate it in real time.

One of the elements that we said in previous paragraphs was the narrative. In Más Allá de la Luz we have found an adventure that (finally) bets on entering a story with force that we discover during the course of it. The responsibility for this improvement passes, among others, to La Desconocida, a character that in Spanish is played by the actress Maggie Civantos, one of the main faces of fictional series such as Vis a Vis or Las Chicas del Cable. 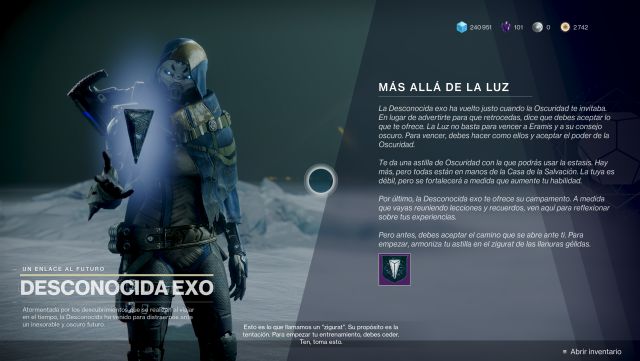 The Unknown takes special relevance in the course of the plot.

It doesn’t take us by surprise. The upward line in this direction began, above all, with Shadowkeep, the previous expansion. Without wanting to go into detail, the outcome of it connects with the common thread of Beyond the Light, which is intertwined with all the events around the Clan of the Kell Eramis. We must emphasize the quality of the video scenes, which are still at a high visual level.

Getting hold of Stasis, which we’ll talk about shortly, will make us run into these Fallen. From that moment the main adventure takes on a persecutory character. With the discovery of this power among the ranks of Eramis, his captains will protect the clan hierarchy with their newly released arts. The battles against them, which take place like a classic final boss sequence, are one of the best moments at the playable level. The great success at the controls is to have proposed a path that is a real challenge. We have died repeatedly during these clashes; that’s when the Bungie we all know gets her best cards. 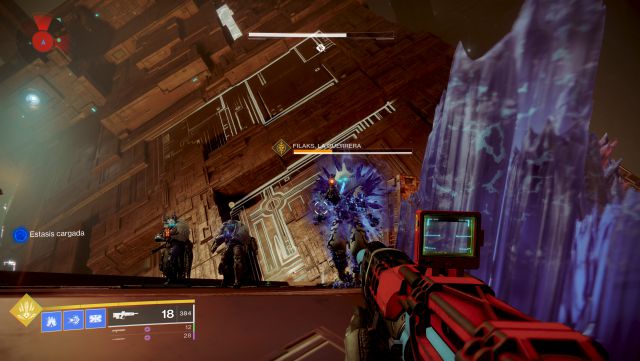 The fights against the Captains of the clan are the best moments at the playable level.

That brilliance of the action moments contrasts with the tasks that connect the missions. Between mission and mission, our progress will stop to complete objectives that have little (or nothing) to do with the events that guide us during the adventure. They are inconsequential missions, they almost seem like patrol targets that block the natural rhythm. This doesn’t come as a surprise – it’s part of the game’s progress, but we think better ways have been found in the past to make us look away from useful content, so to speak. And we’re not going very far: Shadowkeep already did that in 2019. It also doesn’t make sense that when playing in a squad, the collection remains individual. There is no sense of cooperation whatsoever.

What continues to surprise us is the studio’s talent for creating breathtaking environments. Europa, the icy moon of Jupiter and the main stage of the expansion, borders on a brilliant audiovisual level. The horizon is full of details that add credibility and depth to the playable area. The descriptions of the satellite during the promotional period have not fallen on deaf ears: there really is much more under the snow cover. Human laboratories, old abandoned factories, digital structures woven by the Vex… It changes its tone constantly. 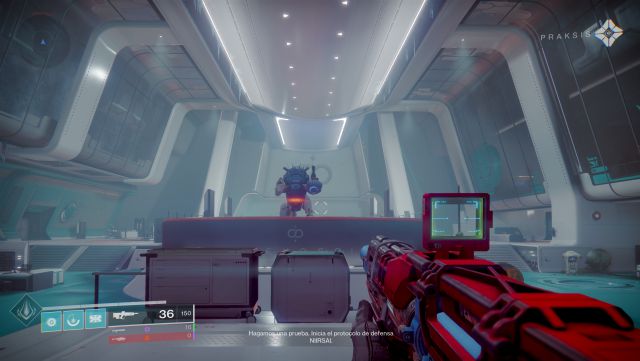 The variety of environments is one of the hallmarks of Destiny 2.

Completing the main quest takes around 8 hours, depending on how lucky you are with equipment and your skill. The content is extended with the assaults and the raid, to the level of quality to which Bungie has us accustomed. The way to complete the Crypt of the Deep Priedra requires quite a few hours, but it is worth it.

There are lights and shadows in the arrival of Stasis, the new power that Guardians will have from this expansion. During the adventure his presence will grow until we gain his power; in fact, the sequences where it appears uncontrollably are a true visual spectacle. The screen fills with effects that simulate this direct freezing of Darkness. This Reviews has been carried out based on a Titan, and in this sense we have found several resources that further enhance the destructive capacity of the role. The super, Glacial Earthquake, creates ripples that freeze enemies when they hit the ground. All abilities, including melee, revolve around minimizing the rivals around you. 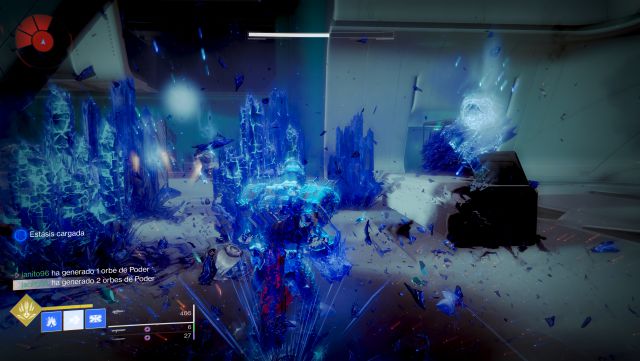 Immerse yourself in Stasis and unleash new powers.

While in PVE it feels good, when we get to the Crucible everything changes. Guardians’ powers with Stasis are far above the rest. All skill chains are too overpowered; Right now it is difficult to find a game that reminds of the old PVP, and that is one of the themes that we said at the beginning: throughout the months its balance will be vital to keep the competitive scene afloat. 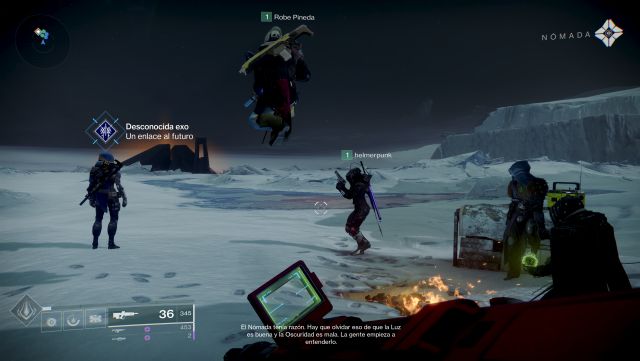 Old friends return to help you against the Darkness.

There is no doubt that Destiny 2 offers fewer possibilities to Guardians who land for the first time with Beyond the Light. The new start at the Cosmodrome is a declaration of intent before the decision to include the content store. Many of the scenarios that have accompanied us these years are missing. We say goodbye to Mercury, Mars, Titan, Io, La Villa, and Leviathan, along with their related events and adventures. Campaigns like The Red War, The Curse of Osiris and The Strategist are part of this cleanup. Others come from the first installment, such as the Chamber of Glass, but even so it gives the feeling that what we live in the game has an expiration date. And it’s a shame.

Destiny 2: Beyond the Light coincides with a relevant moment in the future of your universe. The decision to introduce the content store means that players who land now miss a good part of the adventures that have accompanied us before the expansions. It seems that everything in the game has an expiration date, and it is a real shame. As for the main adventure of Beyond the Light itself, Bungie reinforces the narrative and challenge for 8 hours of pure Destiny, although the sections that connect the missions require completing inconsequential and slow-paced objectives. Stasis, on the other hand, is an unbalanced power in the Crucible. Beyond the Light is ultimately a starting point for your seasons for the next 12 months.