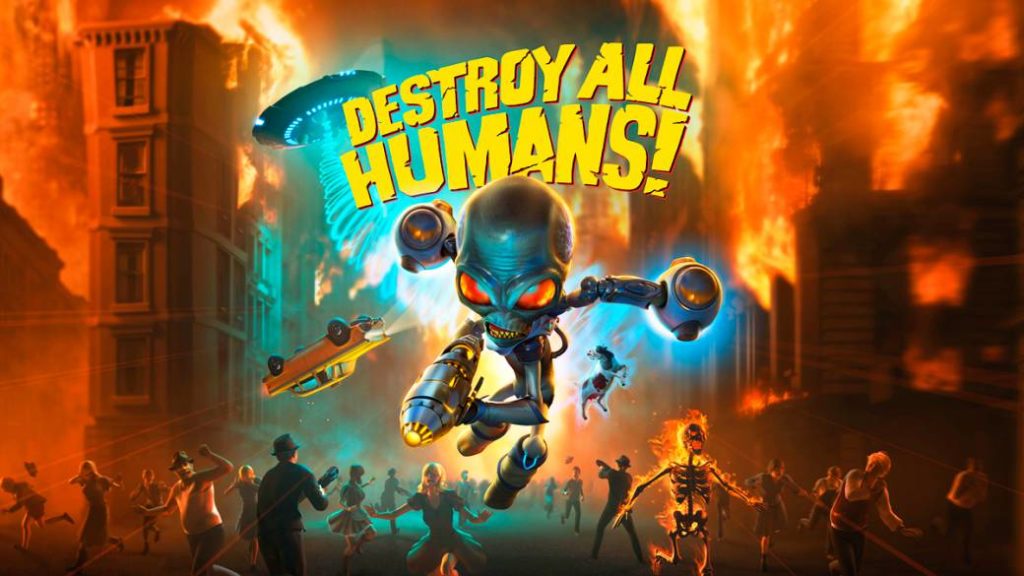 The celebrated 2005 title receives its own remake for PC, PS4 and Xbox One; Let’s see how Crypto has fared this facelift in our Reviews.

Many will remember the light-hearted action adventure Destroy All Humans! of 2005 that came to the market during the generation of PS2 and Xbox by Pandemic Studios, a remarkable video game that put us in the shoes of an evil alien who had only one objective, which was none other than to kill humans, such and as its title suggests. Now, and after 15 years since its original launch, its new version arrives in the form of a remake ‒and not a simple remastering‒ for the current generation, that is, PC, PS4 and Xbox One. Work of Black Forest Games with THQ Nordic , this new update of the adventures and misadventures of the Bighead Crypto-137 aims to recover a way of understanding the medium that boldly points to direct fun, without great artifices and maintaining the same spirit of yesteryear, not without offering small updates of control here and there, plus a deep facelift for such a hooligan sci-fi vision of the mid-20th century.

A great stomp for humanity!

The original installment of Destroy All Humans! At the time it was a breath of fresh air to the most arcade adventures that, far from resorting to elaborate scripts or complex game mechanics, served us on a tray a kind of small open worlds in which to make the thug through an endless number of Sci-fi cliches of the 50s, with the UFO theme as the central axis of his crazy proposal. A title that was far from perfect, it did offer fun and self-confidence with a very personal sense of humor and even a certain irony about Yankee patriotism and its most ridiculous ways of brainwashing its citizens. And speaking of brains, Crypto will need many of them to develop its abilities and those of its flying saucer; but we leave that for later.

With this premise, both THQ Nordic and the German studio Blask Forest Games have wanted to recover that spirit that worked so well in the mid-2000s to create a new vision of the original work through deep updating, yes, more visually than in its development or mechanics, practically unchanged after a decade and a half. And although the game has been remade from scratch, the central pillars of it have remained unchanged, a detail that those who played the original will quickly detect; from control to missions, through the original voices, challenges, the script and all the features that make up the game. Of course, certain aspects have been updated so that the sensations at the controls do not feel so much from another era, polishing the occasional feature and even adding some unpublished material, achieving relative success in this regard.

Destroy All Humans! It captivated as much for its setting as for its plot, a whole parody of 1950s American science fiction in which UFOs and invading aliens were the order of the day. The original title of the ill-fated Pandemic already used all kinds of cliches of the genre, all to build a simple but effective script in which there is no shortage of alien heads, flying saucers, abductions, men in black, the military, atomic bombs, fake news , brainwashes, robots, radioactive cows, anal probes and anything crazy related to such a hilarious theme. And in the remake there is nothing missing, which we are very happy about. 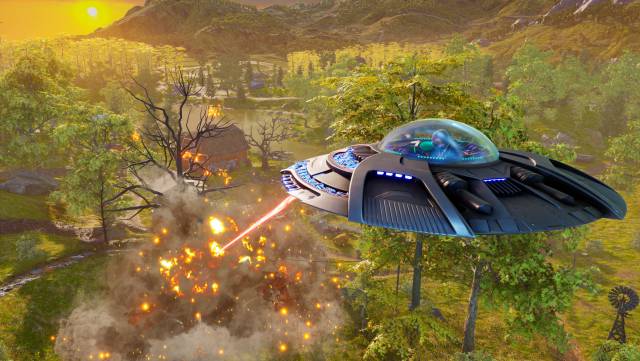 In the same way, his crazy plot remains completely unchanged, a script that introduces us to the alien race of the Furons, from the planet Furon, some aliens who have been visiting Earth for a while with the aim of conquering it, but who decide to precipitate events after the incident of one of his exploratory aliens, Crypto-136, whose flying saucer crashes in Rockwell. In order to find out what has happened to their clone compatriot, Orthopox-13 and Cryptosporodium-137 decide to start a rescue mission that will lead to a full-blown invasion at the hands of such a peculiar pair of aliens, with the good of Crypto visiting places like a cow farm, a military installation or a typically Yankee city as a funny parody.

As we say, the development of the title is exactly the same as the original, that is, we are offered up to six different open environments in which to carry out missions (revisiting them according to the development of events), either to fulfill the missions main and secondary or to collect collectibles, overcome challenges or simply do what we want by exploiting the many tools that the game offers at the gameplay level. The structure is always the same: we use the mothership as a base, either to choose a mission, improve the abilities of Crypto or its flying saucer or change the appearance of the protagonist alien, among other possibilities. Once an already unlocked mission or scenario has been chosen to freely explore or overcome challenges, Crypto descends to Earth in his ship to access the desired level. 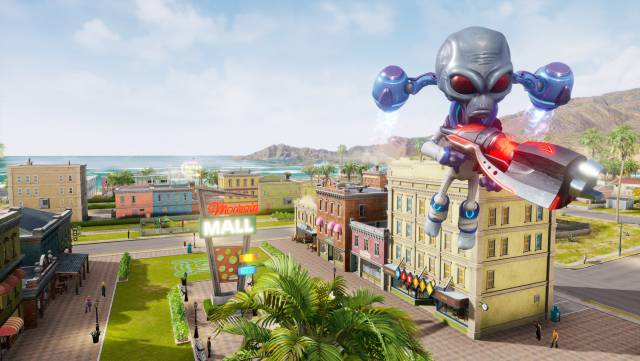 Crypto control and the physics related to its gameplay remain practically intact except for slight improvements that, somehow, make the control not feel out of date. New features such as the ability to shoot while flying, extract brains while moving or briefly glide over the ground to make Crypto control more agile. Likewise, Crypto will not die just by touching the water, but its shield will be affected as long as it maintains contact, until it finally perishes if we do not reach dry land after a few moments. On the other hand, other abilities have been added such as controlling the minds of humans to use them in our favor or transforming objects from the stage into ammunition, either for foot weapons or for the cymbal. And it is that as it happened in the original, we can alternate the displacement on the ground of Crypto with the piloting of the ship, especially in missions of destruction of the stage.

In this sense, the title is much more satisfactory than the original, to which we must add a greater variety of humans, buildings and vehicles; Special mention for the effects of destruction of buildings, very successful. And both Crypto and its flying saucer have received even more unlockable enhancements through human DNA than we can collect, making for a much more complete experience. But it is also that Black Forest Games has winked at the fans of Destroy All Humans! with the addition of an unprecedented mission in Area 42 that was not included in the original at the time and has now been recovered; a small detail that is appreciated. 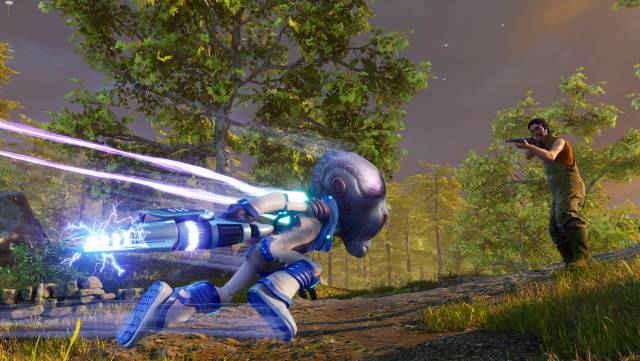 The humor that the game plays can be shocking nowadays, but from the beginning it is clear that it is nothing more than a light-hearted work with certain airs of social criticism, especially in a troubled time, taking advantage of the game that science fiction gives , the alleged communist attacks and the aforementioned fake news that seem so fashionable today.

As it happened in the title from which this remake is born, its gameplay is quite varied with both direct action and infiltration missions, in which we will have to use the entire Crypto arsenal to succeed. Whether firing left and right with different cannons or galactic rifles, popping heads to collect DNA, launching objects or people thanks to the powers of psychokinesis, or using anal probes; all very crazy. On the stealth side, we can use mental control to confuse humans or acquire the appearance of certain people to sneak into prohibited places without raising the slightest suspicion, although always pending that the effects do not pass or the agents do not discover us of the CIA and its gadgets. 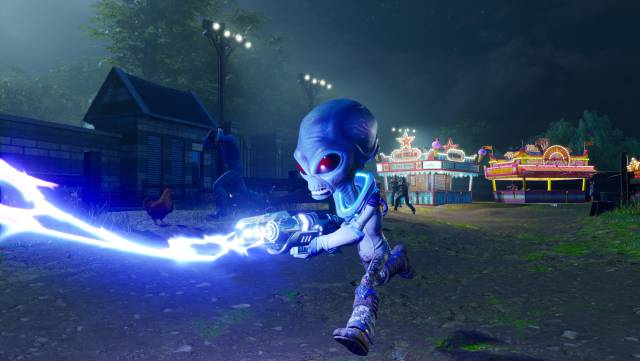 To all this we must add a series of challenges to overcome once we have unlocked each map, tests ranging from races to elimination of objectives, passing through the survival of waves of enemies, among others; In addition, there are numerous collectibles that we must find using the different abilities of Crypto. Still, the remake of Destroy All Humans! it betrays its origins through unambitious missions, too simple for today’s times with a somewhat outdated design; Furthermore, it will quickly become a repetitive experience that leaves little room for novelty once we have acquired the basic notions.

A very showy war of the worlds

Although the real jump in this remake of Destroy All Humans! It comes from a surprisingly satisfying visual section that is light years from the original; but for good. Its creators have done a great job of designing with more current modeling (although without much fanfare), more than convincing textures, lighting effects and remarkable particles and somewhat more arguable animations that, although they are not the best of the best in video games Current AAs do serve their purpose. 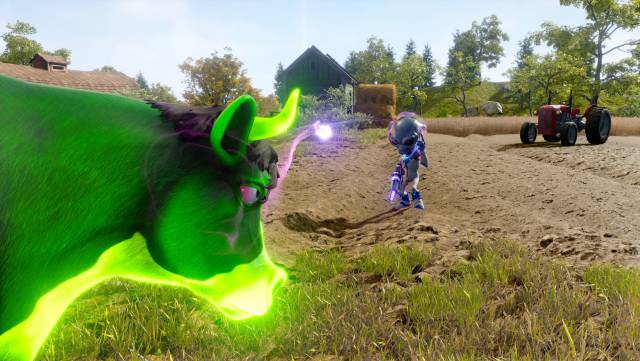 Although all that glitters is not gold and this remake also presents some graphic setbacks such as some popping, clipping or drops in performance, all this on a PS4 Pro, something that should not happen if we consider a technical section that does not go beyond correct for the times. Of course, its artistic design is sensational and only the appearance of the whole set will already draw a smile on our faces despite the plastic appearance of the characters and somewhat fair animations. At the sound level, the original material has been remastered, something that sometimes suffers from a certain lack of quality, both in music and effects and dialogues, in perfect English with subtitles located in Spanish.

Destroy All Humans! He returns to the present day with a remarkable remake, with all the fun and possibilities of the original and his particular sense of humor intact. All this enhanced by a staging that offers very interesting aspects and others with more or less room for improvement. The look of the game is eye-catching thanks to more than convincing textures and lighting effects and particle work, although some modeling and animations do not measure up to full-scale AA production in 2020. It still offers enough content to keep us busy about 10 hours, many more if we want to squeeze all their secrets and extra challenges and side missions. A title that comes as a breath of fresh air among so many multimillion-dollar blockbusters, fun and not pretentious, at a reduced price, although excessively betraying its origins from a couple of generations ago in certain aspects.