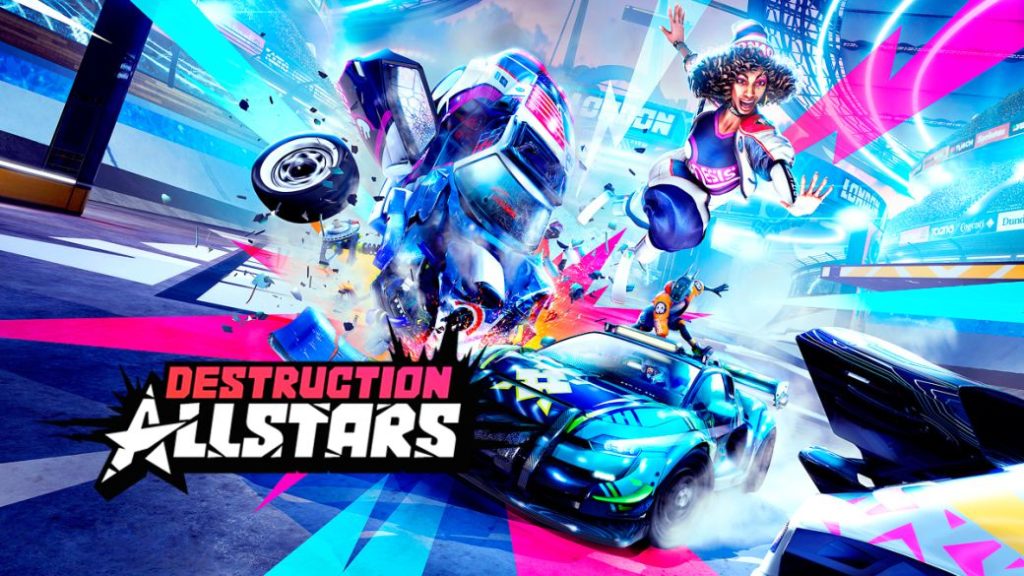 We analyze the new exclusive for PS5, available to download for PS Plus members, a title that wants to make a gap between the competitive proposals of the moment.

Destruction AllStars is one of Sony’s bets with PS5 for this 2021. The game, available to download on PS Plus and which was announced at a price close to 80 euros but which currently cannot be purchased except with the aforementioned subscription, arrived as a flashy name next to Control Ultimate for the new generation console of the Japanese company. The proposal? A competitive court title in which we must destroy the other cars in different arenas, with different rules and with characters who have their special abilities. There is something of Rocket League in the approach, also of the hero-shooters. And there is a desire to turn it into an accompanying, recurring game. To play games with friends. For now, the initial proposal has good ideas, although it falls short in some respects.

Lucid Games puts us in the shoes of a series of experienced pilots, each one more different in terms of design, who have to jump into one of the four available arenas to fight with vehicles against up to 16 players. We are not facing a new driving arcade, but rather a competitive multiplayer… With cars. Available until April 6 with PS Plus, and for the moment not knowing how it can be acquired later, the proposal is as simple as jumping running with our character, getting on a car and starting to stamp ourselves with the others.

The game mechanics are adopted quickly and without problem. We accelerate and brake with the triggers. To this is added the circle button, which allows us to make a typical arcade handbrake capable of turning 180 degrees and starting quickly. The way to impact with the others can be done in a normal way, reaching them at our standard speed, or using the turbos that barely have a few seconds of rest before reusing. There are two: a frontal one, which allows us to propel ourselves forward; and a lateral one to hit to the side.

Driving is completed with the skills of each of the characters that we have to choose from. As we play, we fill in a bar that allows us to launch a special, and there are all kinds of them. From a character that improves his frontal attacks to another that takes out a gigantic crusher with insta-kills, through a bomb that takes all the rivals in a large radius ahead or an ability that takes out spikes with which to attack and defend ourselves , adding more points than in the normal state. 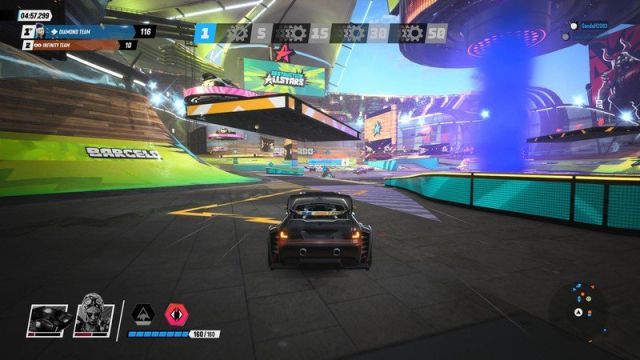 All this in an original development of the games. When our car is broken, or we break it because we hit the walls too much, our character jumps onto the track and, on foot, must look for another car. While dodging enemies. As he runs up the walls doing parkour. Or while activating character abilities that allow you to go faster, double jump, or even protect yourself from cars. This proposal allows us to collect some crystals that fill the special bar. And when we get to a new car, then again to look for impact with others.

There are different vehicles available. From the smallest, very fast and ideal for doing like wasps, stinging and running; even the most balanced in all their statistics or the large ones, slower but that hold the blows better and when they attack, they really remove damage. To these are added the special cars that come out when we activate our special attack.

With all this, the general operation of the game is explained to which we need to add the possibility of stealing cars from other rivals in a mini QTE. Now yes, all the rules on the table. And how do you play? Well, in an agile way and learning game after game. First you start by chasing the cars and launching the turbos out of time. Then you understand that it is better to change your route to go forward, know when to activate the attacks and take advantage of moments of chaos to get a slice. You understand that hitting and bouncing off the wall gives you more points and that abandoned cars, although they don’t give too much, serve to add something. 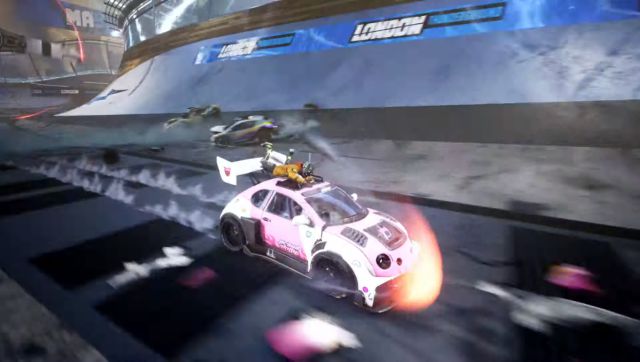 The experience becomes more fun as the games go by, you get hold of one of the heroes and control the space of the stages. But it is there, when you already have some control of the situation, that the game falls short in its proposal. The development of the games has certain ups and downs when you are in no-man’s zones and the vehicles are far away, and there are some problems with some impacts that sometimes, either due to the connection or the physical ones, do not count the points. When you have moments of fluidity, the game works. But in several there is a certain arrhythmia that weighs on him, perhaps also due to the duration of the games. The integration of the parts of our character without the vehicle, in short, does not have the possibilities or the care of the cars, making them improvable sections, although it has its crumb to collect some crystals or the odd enhancement.

This is also seen in certain game modes. The main one is Mayhem, a 16-player mode where the most important thing is to score points to be the first of everything. The chances of crashing and being rammed are higher here than elsewhere, being the most arcade mode. Fun and entertaining, but it is true that played alone it has a more limited route in the long run, something that is accentuated by the few maps (four) available, very similar to each other at a visual level although with nuances at the design level. More successful is Carnado, the team game where we not only have to crash against the other cars, but also collect gears and place them at the center of the game. This development of the games is much more successful, since it allows us to gamble by holding a vehicle to score more points (with the risk that when we go to exchange them, they destroy us), look for combos to optimize the life of the car and decide when to activate our attacks specials. Here we are allowed to play with groups of friends, and this makes the game better. 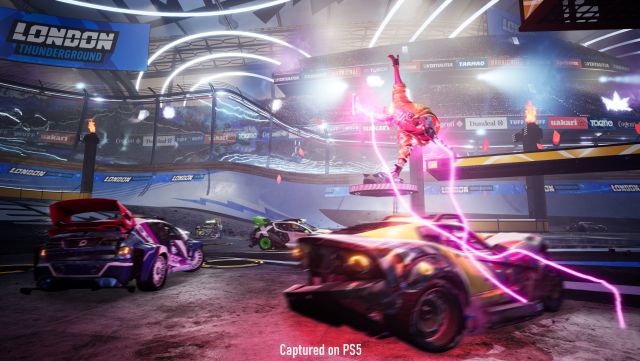 Gridfall, on the other hand, is the other individual game mode in which we have to try not to fall into a stage that gets smaller and smaller while the stage gets shorter. Very Battle Royale style, with a more compact stage than other modes but not too inspired as a modality. On the other side, and to finish with the modes, we have Stockpile, in which we have to control different bases by teams, in the purest Dominion style, and where we can collect gears from rival cars to control the zones, but this time going down from the ours, on foot. The proposal, which on paper is somewhat more complete, ends up having an irregular development due to the aforementioned, the use and role of the characters without the cars.

One of the negative surprises that we have found is precisely in the options to play offline. The title proposes us on the one hand an arcade mode to play with bots to the modalities that we have online, so far good. But it also has a proposal of challenges in which we can get new cosmetics (to equip on characters and vehicles) and delve into the lore of the characters, their rivalries and motivations, which can be achieved with the paid currency. There are two types of coins, those that we get by playing and that we can exchange in the store for objects, poses, dances and all this paraphernalia that is already common in today’s titles, and on the other hand, the PDs, which are bought with real money and that they give us an option to these contents. 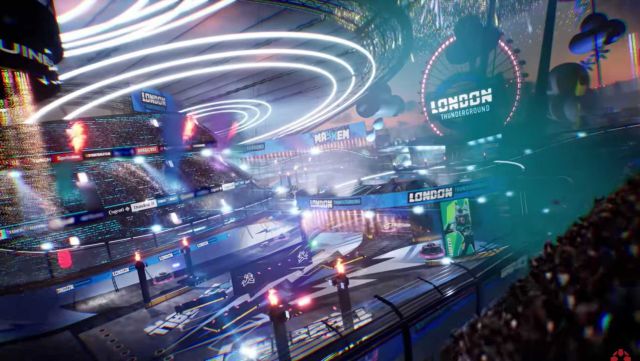 For free we have Mutual respect, a series of challenges between Jian and Ultimo Barricado with proposals and challenges to solve in different phases. But the rest are paid. There are currently two events, a Leader of the Pack in which there is a plot of revenge for Lupita against sgt. Rescue and a temporary event in which we are invited to meet objectives in 7 different challenges. Both paying 200 and 400 PD respectively (500 PD is 4.99 euros). A debatable model of presenting the lore of the characters and the offline content, especially since we do not know how the game will sell once it leaves the Plus in April.

At an audiovisual level, the title does its job without much fanfare. In certain effects, such as explosions and lighting, the proposal is appreciated, but on an artistic level the title ends up being a mixture of trends and proposals that do not seem the most original, especially if we focus on the modeling of the characters. The title goes to 60 frames per second, although it does have some downturn at certain times, and the most negative thing is some physics and some reactions of the vehicles in certain impacts, which shows that they are fired in a way that was not planned, although it is something that is not very common to see, but it is present. Everything related to impacts, explosions and peak moments with special attacks is the most attractive part of the proposal, which comes with limitations in terms of the soundtrack – nonexistent during the games – but good sound effects and good dubbing into Spanish. 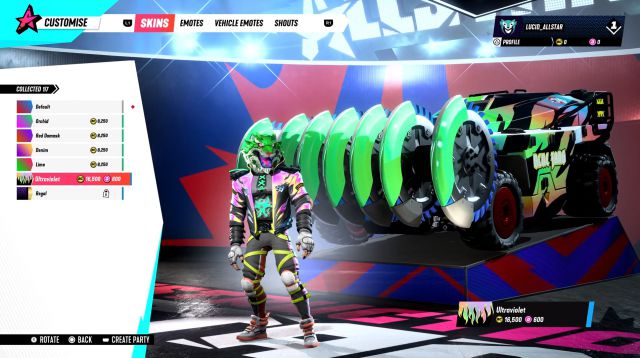 As far as DualSense is concerned, the adaptive triggers are used, although what is best taken out of the control is precisely the vibration. Noticing the steps of our character running, or the shaking on one side and the other of the vehicle according to each moment is satisfactory, and it is also well implemented without being a proposal that can take us out of the game when we are competing to win.

Destruction AllStars comes up with great ideas to be a fun and straightforward online multiplayer proposition. The concept of vehicles colliding with each other in an arena, with special attacks and other abilities works and, for several hours, is entertaining. In addition, modes like Carnado provide some strategy and fun if we have friends to share equipment. But the feeling is that the experience falls short in content: of the four modes, two end up being minor, and the development of the games ends up repeating itself in the long run, to which must be added the moments on foot, inferior in experience to the car game, car change, etc. Nor do the four arenas available at the moment help, although there is a good variety of characters with well-differentiated abilities. The shortage of offline content, and the most interesting payment in the game, suggest that Destruction AllStars has it could give much more of itself. We will see if with the updates and new content planned soon, it manages to raise the proposal. When we talk about bumping into others, dodging and sprinting, it works. But the rest cannot reach the finish line on time.