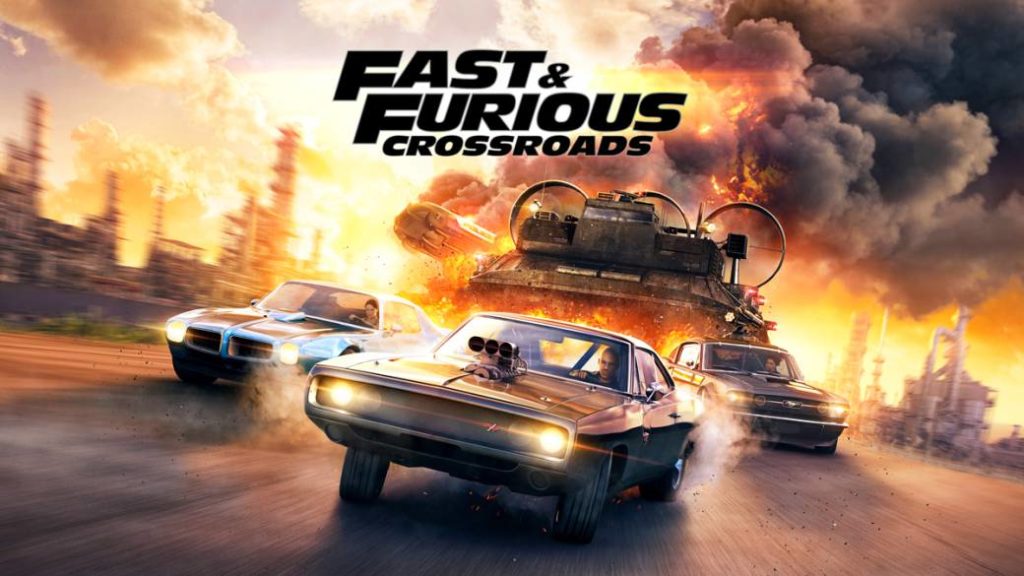 The new game in the Full Gas franchise tries desperately, but stays Half Gas.

“Show me how you drive and I’ll show you who you are.” Dominic Toretto

There is a YouTube channel that is dedicated to showing the evolution of some playable sagas. Surely many will be surprised to see the number of games that have been released in the last 16 years under the name Fast & Furious. And it is that the saga has been as prolific as in number of films and spin offs, although the majority of deliveries have been for mobiles and arcades – very similar to the Cruis’n series.

On consoles we had a release for PlayStation 2 and PSP in 2006 that was not bad at all, but it came too late and with an outdated graphic appearance when PS2 had ‘monsters’ like Burnout 3 and 4 and went for Need For Speed ​​Carbon. And then we had to wait until 2013 to play the ‘jewel’ of the F&F Showdown, a disaster on all levels. The saga of the ‘family’ has made us wait again, 7 years no less, that we can belong to it virtually this 2020 in Fast & Furious: Crossroads. 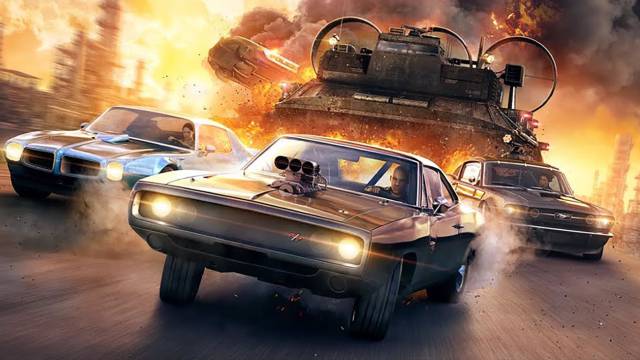 Mutating from movies about illegal racing to a kind of Ocean’s 11 on wheels and then straight to polygon James Bond, the Showdown installment abandoned the racing game style to become more Driver-like than Reflections, with a plot that spliced ​​F&F 5 with F&F 6. The combination looks easy to do: very arcane races with levels full of scripts. Basically zero freedom of exploration but in return I develop corridors to achieve the same effect as the films with their very few vehicular set pieces.

This is what Crossroads tries, which is the fans want. And again the shit, it annoys it at absurd levels, because we do not give credit that films that since F&F 7 exceed the 1,000 million box office have such poor games. Even more so because this is signed by Slightly Mad Studios, authors of games with graphics and physics as portentous as their Need For Speed ​​Shift and Shift 2 in addition to Project CARS.

And on top are the names of Bandai Namco, Universal and the Tigon studio, which is owned by Vin Diesel himself, a longtime gamer and who has helped create great titles such as Chronicles of Riddick: Escape from Butcher Bay. Therefore, we do not understand what this disaster is about with the names behind it. But hey, let’s get down to business.

The game begins strong, directly at the controls of a Playmouth GTX with Dom Toretto at the wheel, and Leti alongside him on a mission to chase a baddie through exotic Greece in a flamethrower tank. This is where we have the first contact with the game, and this is where we already see that things are not going well. The GTX is powerful, but it gets out of hand. And it is true that here we can say that this usually happens with an American Muscle at 150 – 200 km / h, the problem is the control and the camera.

Crossroads is basically a car game with a story that weaves together the playable moments within a campaign made up of 35 missions + the prologue, providing a total duration in the Singleplayer of 4-5 hours – even less than 4 if you rush it. The problem is that the vast majority of them are, in 1 word, BORING. For example, the first 9 missions are tedious -including a night Tuning race and everything-, and until # 10, which is basically a recreation of the initial scene of the attack on the truck in Fast & Furious 1, it does not become the least bit funny. , with a mission that finally brings adrenaline and challenge. 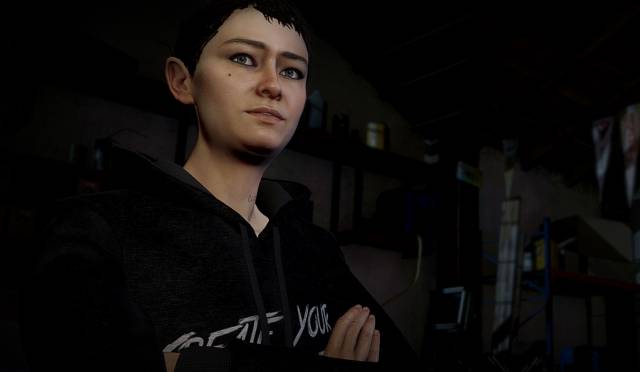 The problem is that the missions are mostly bad, very badly designed, worse implemented and the playable execution is basically ‘accelerate, drive almost in a straight line and do not go off the track’, which either the game returns us to it or It happens directly as in the streets of Barcelona -one of the cities of the game, and that evokes the The Wheelman of Diesel himself-, that you cannot explore anything, only move through the streets that the study does not limit with arrows that cannot be crossed , point.

Luckily, among the 36 levels there are phases that are fun, that are pure F&F -especially the last 2-, but they are few, very few. I wish they had bet to be less serious and indulge in the F&F arcade madness, which is what we have been looking for and only find in flashes. Another element is that the plot of the game itself is interesting, but the Family itself comes out very little, and although we love the two protas, Vienna and the non-binary Cam, this is F&F, and only three characters come out of the series.

Along with the poor mission design we have lousy control. To begin with, a big mistake: the camera is fixed and cannot be moved, and also too close to the car. We cannot choose another view, nor move it away – which is crying out for it – not even one in 1st person, so many times and in somewhat more closed environments, the visual chaos of not knowing where we are is considerable. We can at least rotate it with one of the sticks, but it doesn’t do more either. 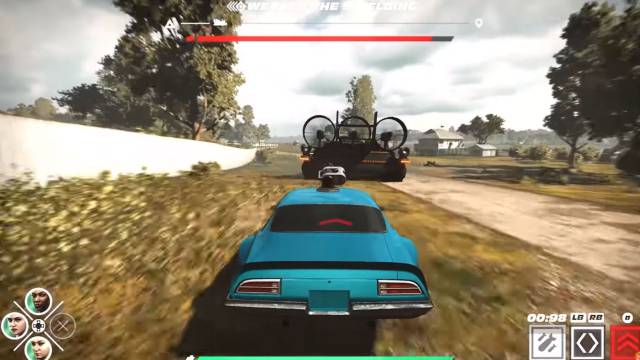 And the cars are something like a Russian roulette: although it is appreciated that each vehicle has its own characteristics – it is not the same to drive a Shelby GT 500 than a Renault or overpowered 4×4 buggies for the desert – the driving is generic and some cars are well implemented and drive well, and others are a bloody cross trying to master them. We like the touch of jumping from one driver to another in various missions -and each one with their skills-, but this is not very common.

To give life to the gameplay, the cars not only have nitro, but also the ability to hit: in the style of the long-awaited ‘Takedown’ that Criterion gave birth in that masterpiece that is Burnout 3 -which ages well-, in F&F Crossroads we can hit the rivals and kick them off the road. The problem is that the integration of the mechanics into the top triggers + the control + the camera + the excessive amount of damage that the baddies take sometimes makes this fun mechanic tedious. We also have James Bond-style spiked hubcaps, but that’s another mechanic that is also made repetitive by the long life bars.

The best is undoubtedly the number of nods to the saga -like seeing a The Racers Edge store in Barcelona, ​​the same one where O’Connor worked in the first F&F-, or references to Suki, a character in F&F 2. There are checkpoints, and thank goodness, because repeating the entire missions would be an ordeal, although honestly they are not very long 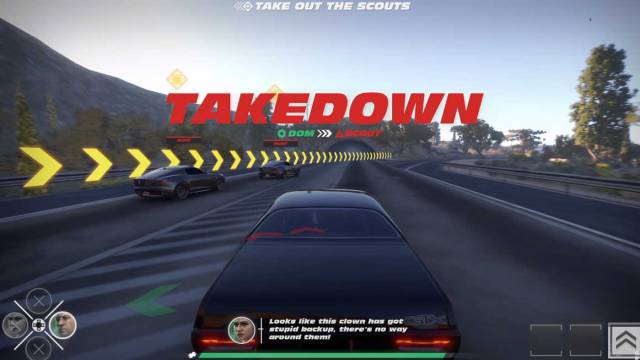 To add some more content to the proposal, Crossroads comes with an online mode a priori fun on paper. With support for games of 9 simultaneous users, these are divided into 3 groups:

Now, the grace is to face the 3 teams within various game modes type missions with trucks and hovercrafts that we have to defend, attack or arrest-depending on where you have to be. Or Capture the Point modes, speed tests, etc. Being victorious gives you loot: arts, profile cards, new spray paints and even vehicles. The problem is two: First, how complicated it is to be able to play some games, since the multi seems somewhat broken and either it does not find a match for you, or it ‘crashes’ several times before it starts.

Second: if you manage to enter a game, you will see that this 3 vs 3 vs 3 scheme is difficult to see applied, because in an instant the strategies jump, everything goes to hell and the gameplay becomes pure chaos of teams colliding with one and again.

Let’s go to the visual section: Graphically it is not bad … If this were on September 23, 2007, the day the PlayStation 3 came out in Spain. Because being as we are in 2020 and 2 months into the 9th Gen, Crossroads sneaks an environment graphic with flat textures and characters with details but very superficial.

And removing the 6 main characters, the rest are reuse of models one after another. Hell, if even the public or the citizens you see on the sidewalks are ‘Cut and paste, paste, paste’ models who neither move nor do anything, they are just put on like dolls.

Looks good? You will not see it that way in the game as it looks in this official capture

The same cars: well designed but poor in texturing. At least we must praise one thing, the frame rate, because although it does not go exactly to 60 constants, if it stays around 50 with hardly any drops in terms of gameplay -not in the cinematics, it is scary to see it scratch and everything.

And it is that graphically the set has good highlights, as for example the 4th mission: leave Barcelona and climb the hills with a sunny post-rain sky and the road wet but shiny. There are effects of the sunset sun at the exit of a tunnel, but the whole is terribly old. This is basically what Showdown should have looked like, because the feeling is to be playing an intergenerational line-up title out of PS3 or 360 or less – the 15-year-old NFS Most Wanted 360 is destroying this Crossroads everywhere.

The physics are like those in the movies: no matter what car it is, you can even hit SUVs and let them fly even if you have a tiny Renault. And if you already get into the multi, there you are going to see scratches.

As for the sound, it seems the only section in which everyone has taken it seriously: It is a pleasure to hear Vin Diesel’s booming voice so personal -although sometimes it is not very because of the work-, Michelle’s Latin tone Rodriguez, the jokes of Tyrese Gibson or the king of accents, Peter Stormare along with the voices of Vienna and Cam, which are also good. All this localized with texts and subtitles in Spanish.

The OST is a delight, and it could sound like in the movies without a doubt. We have electro-Latin rhythms, Rap, Hip Hop, Electronic fusions with classic Middle Eastern tones, trance and even Steve Aoki songs. And then the score by Stephen Baysted, composer of precisely series like NFS Shift or Project CARS, which creates a mixture of electronics and orchestra that helps us feel that more is happening on screen than what actually happens during moments of action, although it also takes cuts as beautiful as this one.

This time yes. This time we thought it was the good one, the definitive one, the game that the fans of the family deserved… But no, because the fears that jumped when seeing the first trailer are well founded and worse. Inside Fast & Furious Crossroads there is the F&F game that we always wanted to play – at least in the series’ Tuning post-race DNA – with crazy action scenes, arcade control and all for the adrenaline rush. But the outer shell is that of a game that needs at least 1 whole year of work. The graphics are very out of date, the control needs an improvement, the camera should have more options, the online is broken, the missions are boring … And all for 70 euros, ‘full price’, which is what we understand the least.

The idea was good but it has been carried out in a disastrous way.