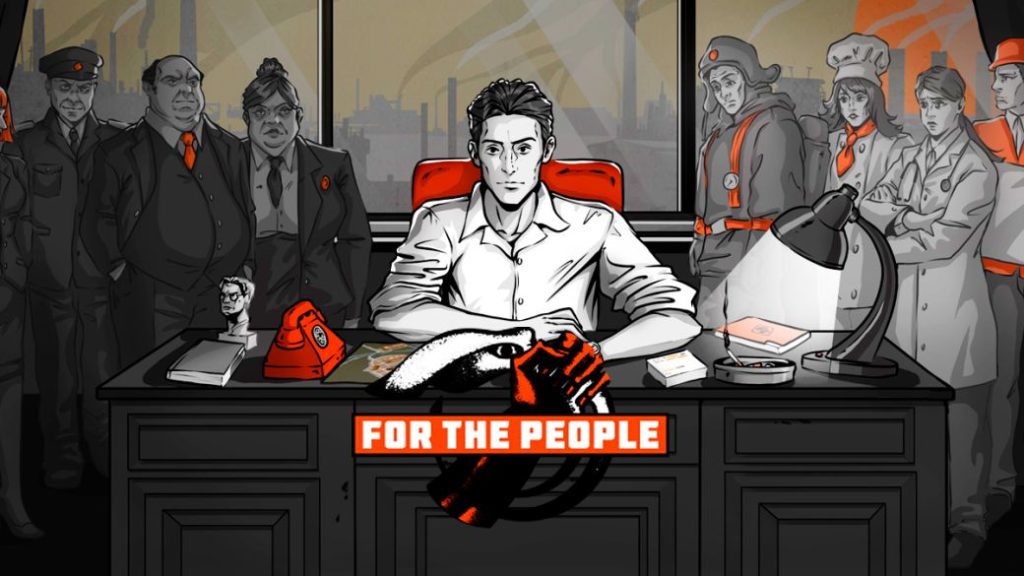 An alternative Soviet Union serves as the framework for a game whose aim is to show us how any idealist, subjected to the right circumstances, will end up succumbing to some form of corruption.

Perhaps as old as politics itself is the corruption inherent in the use (and abuse of power). A subject discussed many times, that of the good innocent man who, placed in the right place and time, ends up succumbing to the inevitable temptations. That is the common thread of this For The People.

Arisen from the minds of young Russians and published by 101xp, this title plunges us into a fictionalized but highly recognizable version of the Soviet Union in its mature stage. Converted into the Union of Orange People’s Republics, it is presented to us as a highly hierarchical and deeply corrupt society, where a small part does and undoes regardless of the hardships of the common people to which they are supposedly due under the distracted gaze of a party more concerned in maintain control.

In our role as a brilliant young man, chosen for our academic merits to lead a medium-sized city, we will have to deal with the local cacique clique, the party and the own needs of our population while managing the resources of the city, to a group of police officers and we solve a strange murder in our spare time. 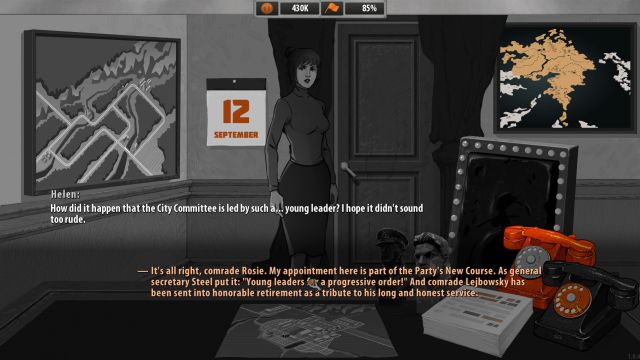 Indeed, we are talking about several different playable formulas that we must attend to at different times of each working day as mayor, each developed in its own way. The main one is to deal with the complaints we receive in the form of letters from our fellow citizens. Solving their problems will cost us money, but at the same time ignoring them will cause small accidents to big disasters, in the process eroding our popularity in the eyes of our fellow citizens, the party or both. 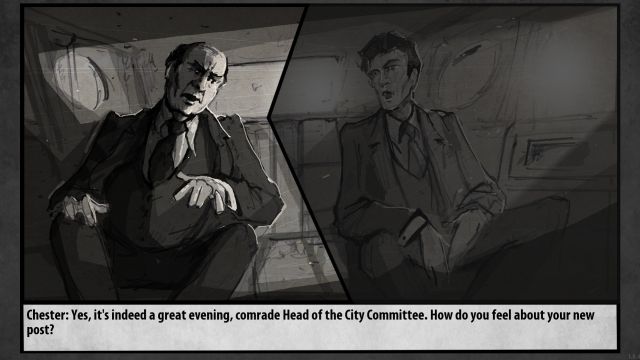 But apart from reading the citizen requests, we will also have to deal with problems that the party transmits to us. For them we will have a series of faithful officials, reconverted into a sort of parapolice body at our orders, whom we will have to entrust with how to proceed. Failing in these missions will cause us to lose the confidence of our superiors, which could jeopardize our position at the helm of Iron 1.

To all this is added our daily obligation to decide the production of the local factory, and at the same time decide for what objects (food, medicine …) that our city lacks we will exchange that production. Increasing daily production will cause stress for the neighbors and our loss of popularity. 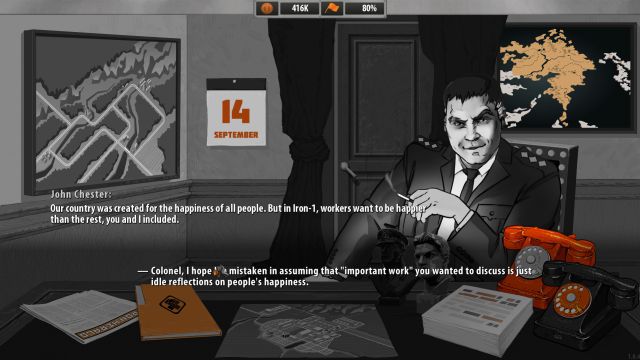 But unfortunately, coinciding with our arrival to the mayor’s office, we will have to deal with a pandemic and famines among our neighbors, which will force us to allocate those extra resources if we do not want our citizens to suffer and rebel against us. In addition, we will have to comply with party requests, which will force us to decide whether to temporarily increase the rate of production, at the cost of infuriating the workers. 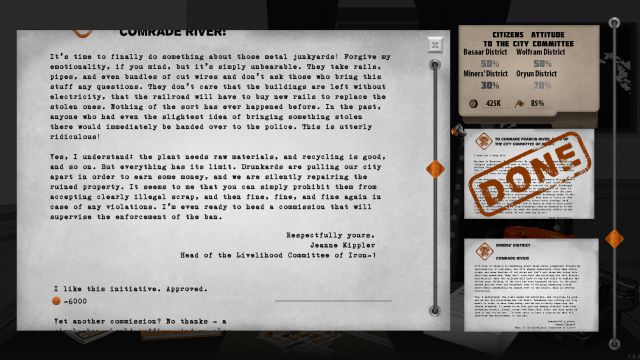 This part of resource management is a somewhat useless and not very fun addition, the only challenge being to remember every day to over-acquire the resource that citizens demand from us at that time, and becoming simply tedious in the medium term.

Finally, once our workday is over, our life as a detective will begin, meeting different suspects and checking clues to be able to make a subsequent accusation. Some sequences that will allow us to know a little more about Iron 1, our city, and the kind of people who live in it. 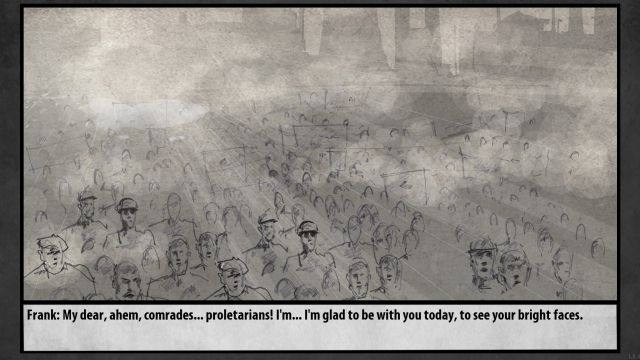 But the reality is that all the gameplay is an excuse for the narrative, which is focused on showing us and making us participants in political corruption. From the moment we step foot in our office, we have the opportunity to let ourselves be carried away by the different powers that be at play, and no matter how decent we want to be, that tide will drag us into less than decent actions whether we like it or not. This is a game about corruption and we will not be able to escape from it, although we will be able to participate to different degrees according to our decisions. 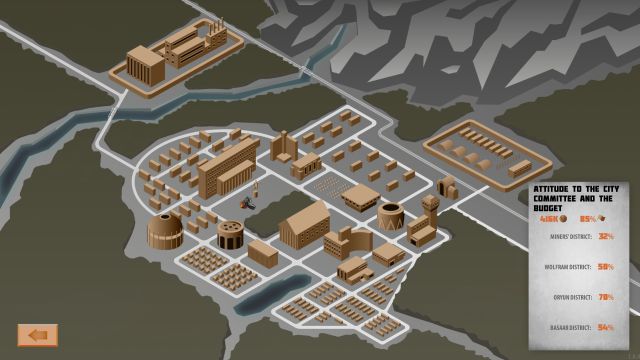 Of course, the game will not be long. The way the game is designed cuts our term in office to just a couple of weeks, making the management element somewhat useless, while leaving a plot that is pretty to the point.

This short duration is due in part to the bumpy development of the title itself, as explained by the developers on their Steam page. Born from an idea of ​​friends and originally developed by collaborators in their spare time, with the goal of having the game in six months, the company proved too ambitious and that first attempt at development ended up with people abandoning the project. Only thanks to the entry of new investors and the professionalization of its development, it was finally able to come to fruition after several years of development. This past helps to understand the feeling that For the People transmits, that of a project whose ambition far exceeds what it actually manages to materialize. 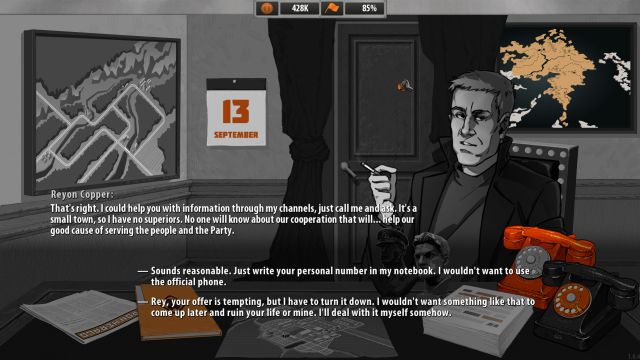 Technically the game shows a compliant aesthetic, but without bragging. Music does its job with the aim of immersing us in the atmosphere. Meanwhile, its rugged development takes its toll on the graphic section, which shows irregularities in the finishes and even a touch that is somewhat shabby, such as using the face of Emma Watson passed through a filter for one of the characters. Regarding the language, the game only comes in Russian, Chinese, English and German, so being based entirely on reading, a good level of one of these languages ​​is recommended to enjoy it.

For the People fulfills its mission of immersing us for a while in the climate of moral decadence of the late decades of the Soviet Union, as well as a plea for the ease with which any ideology gives way to the creation of corrupt and exploitative elites. . Unfortunately, he does so with an ambition that exceeds his possibilities; staying in a product that could have given so much more of itself had it focused on its virtues instead of trying to encompass all the ideas of its developers.