You are here: Home / Activismo Lgtbiq / GayBlade, the rainbow refuge 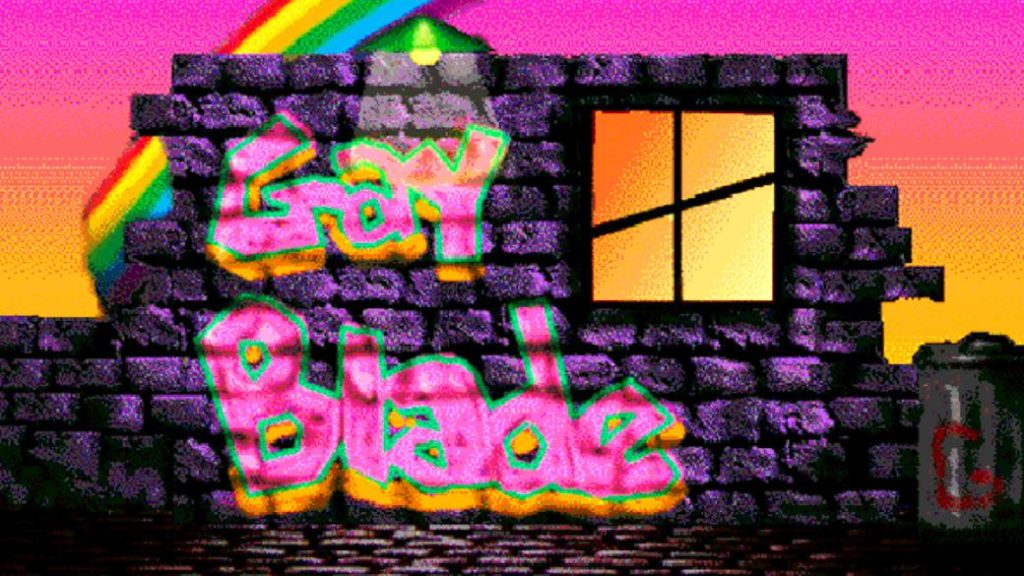 After being bullied, Ryan Best created a catharsis RPG adventure that served as a virtual refuge for many LGTB players.

Despite the social advances in recent decades, the representation of the LGTB community continues to be considered a taboo subject in the media and, especially, in video games. After a greater awareness of diversity, the inclusion of characters that differ from the classic heterosexual male continues to raise suspicions in certain sectors. The Last of Us Part II was censored in the Middle East for “homosexual content”, and was punished with a review bombing by players who had not even tried the title. Let us also remember the case of Overwatch, a title whose lore is being made over time and through transmedia elements. When the public discovered that Soldier 76 and Tracer were gay and lesbian, respectively, various disagreements and suspicions were aroused. Is inclusion a commercial claim of the current era? However, if we take a look at the history of the video game, we see that the desire to have a worthy representation is not a novelty or a passing fad. In the documentary High Score, which explores the early days of the industry, they narrate how Ryan Best created Gayblade, a provocative role-playing video game set in the classic sword and witchcraft universe, but proudly waving the rainbow flag and sinking it into homophobic skulls.

One of the attractions of the role is that it allows us to mold our protagonist to our liking — within the limitations of each system. We can choose our appearance, race, class, specialties and make our scale of values ​​according to the decisions we make in the game. It is not surprising that there are role-players who project through their avatar a fantasy of power, an idealized version of themselves and / or who they would like to be. This, moreover, allows socially invisible people to seek their own representation. In a virtual universe it is possible to unleash the imagination and go beyond the traditional narrative. For example, it is possible to create a lesbian elf and have an affair with a fierce barbarian as they go in search of treasure to found a hospice for orphaned orcs.

Adrienne Shaw, curator of the Schwules Museum (Berlin) interviewed its creator Ryan Best on the occasion of the exhibition dedicated to LGBT history in video games. The designer came up with this title as a catharsis after a traumatic event: “I grew up in southern Illinois. That rural Illinois and hick. I had just started high school when a friend pulled me out of the closet against my will. This happened on a Friday and by Monday the entire institute knew about it. The torment, threats, and bullying were endless. I was coming home in tears. Things got so ugly that I even tried to kill myself. Later, I moved to California and was in Castro (San Francisco) when I started working on the game. But even then I carried the emotional scars of what happened to me in high school. The truth is, GayBlade became my therapy. I brought into the game all kinds of people who had attacked me and turned them into a monster that the player had to destroy. And I was like, ‘You know what? He blows it on me. ‘ When I finished the game and it launched, I felt like all my emotional charge was gone. I felt confident and the memories of Illinois stopped haunting me. It was very empowering. “ 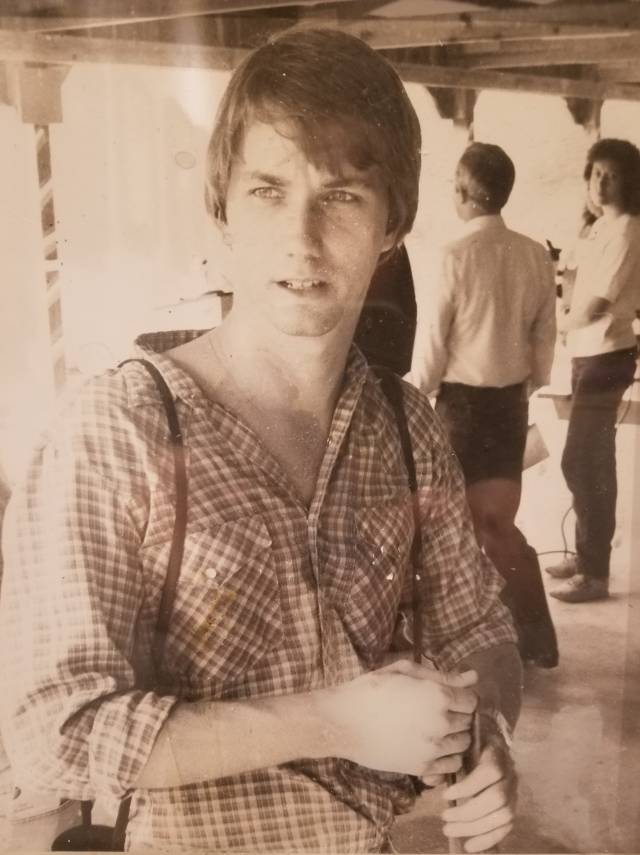 GayBlade’s instruction manual warned of the adventure’s satirical tone: “GayBlade transports players to a dark ancient dungeon on a terrifying mission: rescue Empress Nelda from the disgusting right-wing creatures that inhabit there. Luckily, the rescue team is made up of heroic drag queens, queers, lesbians and many more who will not stop to return their beloved empress to the luxurious Gay Fortress. But can they get away with it when so many others, before them, have failed?

Ryan Best teamed up with Creative Director John Theurer to create a play that took off from the classic Dungeons & Dragons board role-playing game, but with a satirical tone that showed his uncompromising intent. A group of four adventurers gathered to launch out on the rescue mission and, first of all, they had to equip themselves properly. The weapons, purchased at a Magic Boutique and a traditional shop, consisted of stereotypical gadgets such as bags, maces, hair dryers, and false nails. As for the armor, these were fetish outfits such as leather jackets, aprons and crowns. Condoms also had a protective function beyond sexual health. 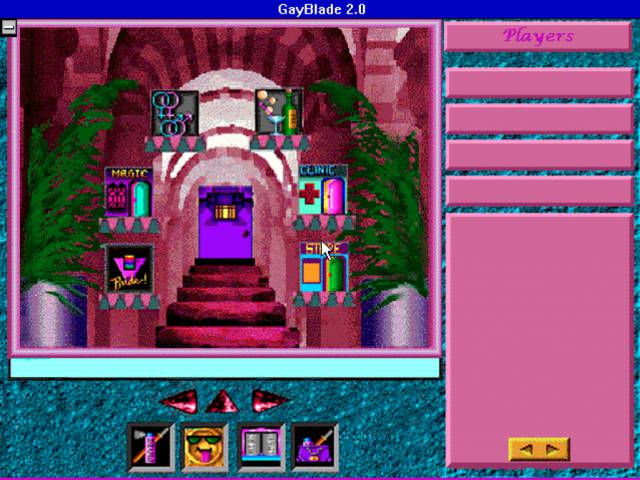 A blow to Buchanan and homophobia

The portrait of the enemies was a grotesque version of different fascist archetypes, such as evil popes, religious fanatics, homophobic policemen or neo-Nazis dedicated to hunting gays. A special mention should be made of crabs, which refer to the plague of crabs that Ryan Best experienced in his institute, as documented in The Gamer.

But the most forceful blow of the game was the portrait of the main villain of the game, leader of the homophobic hordes: Lord Nanahcub, anagram of Buchanan. This acid reference to Patrick Buchanan, Republican candidate in the 1992 elections, was quite a declaration of intent. The politician did not hide his dislike for the LGTB collective during his public appearances and considered that equal marriage would mean for the United States his condemnation to hell. In the documentary High Score, Charles Martinet analyzes the impact of a title that rebelled against institutional homophobia: “[Fue] a great and fabulous slight to the Government of George HW Bush, a catharsis that masked social and moral issues with a fantasy game ”. 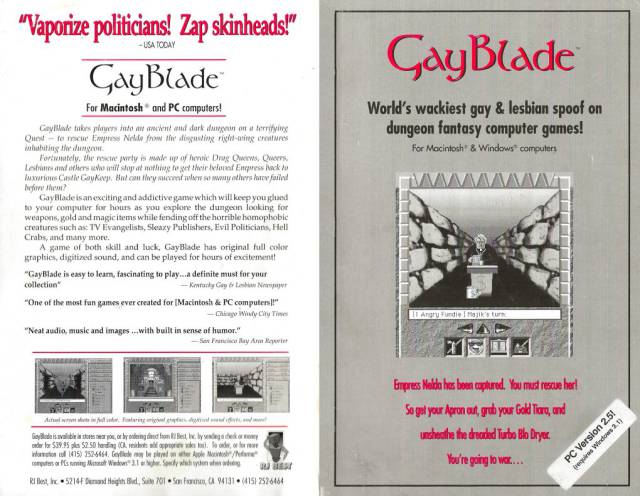 However, GayBlade did not remain an irreverent work and that shamelessly mocked homophobia and fascism. The same study decided to donate part of its profits to LGTB associations. On the other hand, Ryan Best’s proposal had an enthusiastic reception; many people found a pleasant refuge and a virtual world in which they could show themselves as they were, without fear of reprisals like those that the designer had suffered in his adolescence. In addition, these were not easy times: AIDS had become one of the diseases of the 20th century, along with the unjust stigmatization of the LGTB community. “And I thought that no one would buy the game, and ended up selling hundreds and thousands of copies,” says Best Adrienne Shaw. “I donated a lot of copies to associations because I wanted to help the community. In addition, it was then that the AIDS crisis passed and it is not that we had plenty of joys and fun. This was one of the ways in which I hoped to alleviate, even for a little while, the burdens and sadness of many people ”. In High Score, Ryan Best recounts how many fans sent him letters about how GayBlade had made their lives brighter. In addition, they asked for extra content for the game, with a greater variety of enemies that covered more grotesques than the usual fascist.

Ryan Best also detailed how the press echoed his groundbreaking work, which surprised him given the independent nature of a game from the 90s: “I was surprised by the coverage GayBlade received. The phone would not stop ringing and everyone wanted to interview me: national public radio, USA Today, national and international LGTB newspapers, Der Spiegel Magazine… even Howard Stern interviewed me on his radio show ”. As for the critics, they praised the game’s bravery and sense of humor, and warned that it was not a simple game either, as we noted in the Village Voice review: “As cute as it may seem, GayBlade has its crumb when it comes to playing. You better have substantial role-playing video game experience to know how to cope. I gave up after watching too many characters die while I was searching for the correct controls. ” Joe Clark, author of the article, also punished the game’s visual interface, but on top of that he praised the fun provided by the claim allegory. 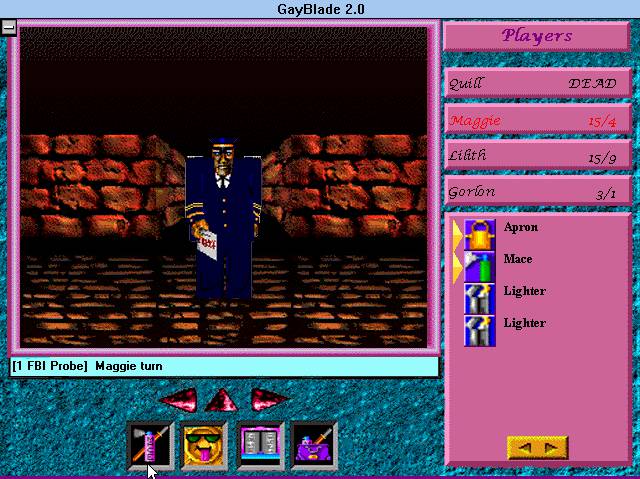 Encounter with a fascist at GayBlade

Loss and recovery of a historical gem

But not everyone saw GayBlade favorably. The Encyclopedia of Pro-Life Activism – a file intended to classify works that are dangerous in the eyes of the far right – singled it out as a pernicious work that sought to “advance the gay agenda.” To make matters worse, the game suffered a misfortune that almost marked the end of the rainbow adventure. As Ryan explains in the documentary High Score, he lost the master copies of the game during a move from Honolulu to San Francisco in 2004: “My master copies, my installation, my source code … Everything.” Several fans of the game went off to send him a copy, but it was the Schwules Museum in Berlin that accomplished the mission of saving a game that had tiptoed past in video game history, despite coverage at the time. In the museum’s research work to find forgotten video-play jewels from LGBT history, they also discovered Caper On Castro Street (CM Ralph, 1989), an adventure starring a lesbian detective in search of a missing drag queen.

Ryan Best, despite not having the master copy of the title, was able to provide material that served as a witness for a groundbreaking creation for a reviled sector of the population. The instruction manual, the press kit and some rescued captures of some articles of the time were exhibited and served to tell a story that had fallen into silence. 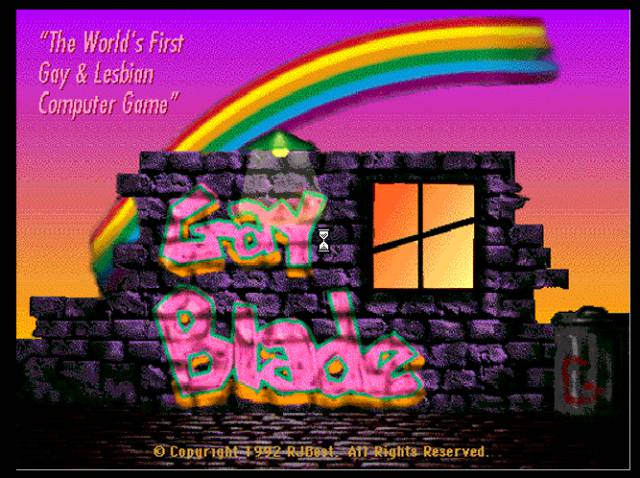 Finally, and after an arduous search worthy of a treasure hunt, Best found the original game files in 2019. Matthias Oborski, from the Video Game Museum in Germany, helped him create a playable version from these files and, with the help of the LGTBQ Video Game Archive and Jason Scott (The Internet Archive), they managed to give a second life to a title that it is currently downloadable for Windows for free. GayBlade fulfilled its mission to make happy a group that was abused on a daily basis, both in the media and in their daily lives. Gone is the era of AIDS and the stigmatization that ignorance of the disease brought with it, but homophobia continues to be an enemy today with too long a health bar. However, titles like GayBlade can bring a short and grateful glee to people who sadly suffer hatred for who they are.