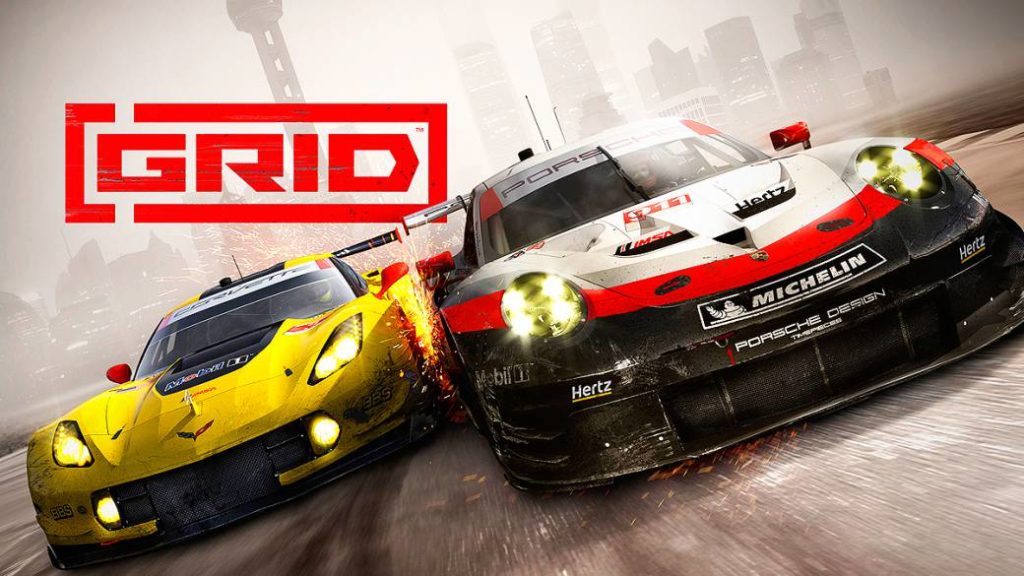 The GRID driving saga opens in the current generation with a restart of it that has more shadows than lights.

Codemasters returns to the tracks for the third time this year with a renewal of the GRID saga that may not have come out as round as they hoped to achieve. The casual arcade of the British had its last installment five years ago with GRID Autosport and since then we have not heard from the franchise. After all this time in the loft, the saga returns with current technology to PlayStation 4, Xbox One and PC with news such as the Nemesis system and a successful AI rival.

After thoroughly testing the new Codemasters we have to say that GRID, after three titles already launched in the market, needs to improve in all aspects, especially in technology, where the Titan Forza Horizon gives an overview on everything. Comparisons can be odious but believe us that even without the video games created by Turn 10 and Playground Games, GRID leaves a lot to be desired.

The first thing to note about GRID is the total sum of vehicles available to drive. Around seventy cars that include classes such as muscle cars, sports cars, classics or single-seaters, with a stellar appearance of the Renault R26 by Fernando Alonso who, in addition, has always advised the development of the video game and we can even compete with it in a category that has your name. These competition machines can stroll through up to twelve different scenarios that range from the brand new Tokyo or San Francisco to the Indianapolis or Silverstone circuit. They may seem scarce but many of these environments contain various stages that make a total sum of 80 very different tracks from each other. In both aspects it seems to us a very balanced content although perhaps a few more vehicles are missed. 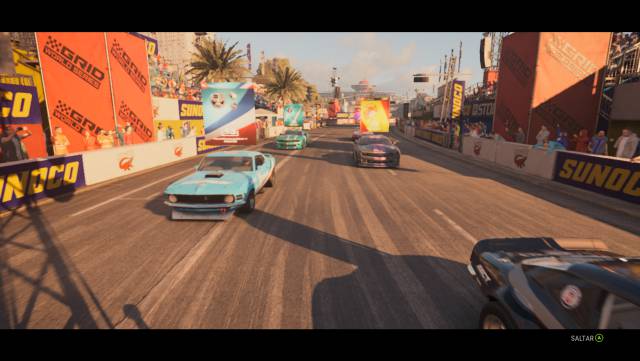 The first but we find that there is no progression, GRID lives up to the subgenre of driving from which it comes, the arcade. A kind of panel with championships distributed among seven categories where we only get money and extras to customize our vehicle – visually – is the only thing we will see in the main mode. Neither equipment management, nor a simple garage to observe our machines and no sense of progress that makes us fully enter the title. In fact we can complete the races in the order and category that we like the most without any rail that takes us from here to there.

Each of these categories requires a type of vehicle to compete in them and we will not always have the necessary budget to obtain one of the required machines. The only solution available is to repeat championships that we have already mastered before, complete them and fill our coffers repeating the process. It is not a novelty, Gran Turismo already demanded this effort on the part of the player, although they were other times and this type of “content” was something more debatable than at present. It was linked to the mechanics of the game, now it feels like lack of ambition on the part of the programmers. 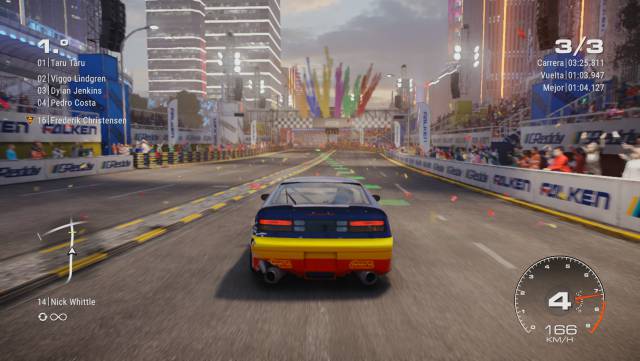 Once all the categories have been overcome – which will not require us too much time – we can only repeat the main mode or go to the online section, another way where the laziness is eaten by GRID. Quick and private game, nothing more. In the first point the video game randomly chooses circuits and rules for a maximum of 16 participants where we cannot configure anything, the machine chooses. In private we do have access to a lot of options to customize our careers, except for the weather, but we can only use them if we have friends who play GRID. Neither invitations to players with whom we have competed in the Quick Start mode, nor unique codes for other users to enter the room or any other way to enter it, just adding them to our list of friends of console or PC and inviting them later. There are no other ways to play connected to the network nor for two players with split screen, this is the only thing that GRID offers in its multiplayer facet.

Suitable for all audiences

GRID is an arcade driving video game and, of course, framed within this category, little or nothing we will find realistic simulation behind the wheel of the vehicles they offer us. Everything is very traditional, of the old school, although slightly realistic behaviors have been added to the gameplay that do not affect that “cabin” spirit that it shows. Remember how we stepped on the accelerator repeatedly in the Ridge Racer saga? Here it also works exceptionally well to take the curves. 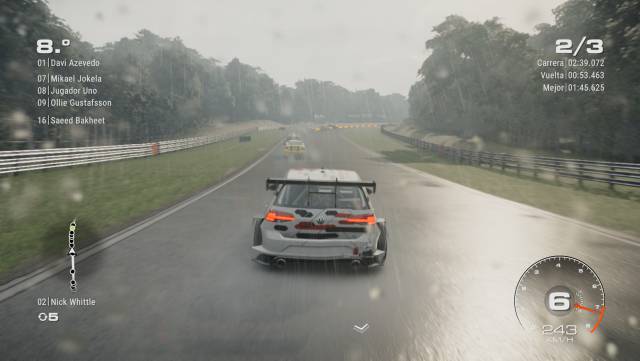 Fearful overtaking, endless skidding, sequences worthy of action movies and much more, that's how GRID is visually and playable thanks to its control. Even the difficult ones to master single-seaters are suitable for drivers with little showers of this type of vehicles. Unfortunately, the rain that we can sometimes find on the track little or nothing affects the behavior of the car, something that should be fixed in future updates.

The damage system is visually fantastic, we cannot deny it, but at the minimum we will see parts of our car flying, touching the ground or half dismantling … or quite the opposite. In addition the animations are always the same and subtract some realism from the action. Although the damage almost always comes from our clumsiness at the wheel, it can also be caused by the Nemesis system that has been added to the videogame, a kind of rival that is marked as our enemy if we perform undesirable actions towards said runner. Your AI will be more aggressive and will not contemplate benevolence with us, being able to leave the car shattered at the moment – and not notice too much in driving, by the way. 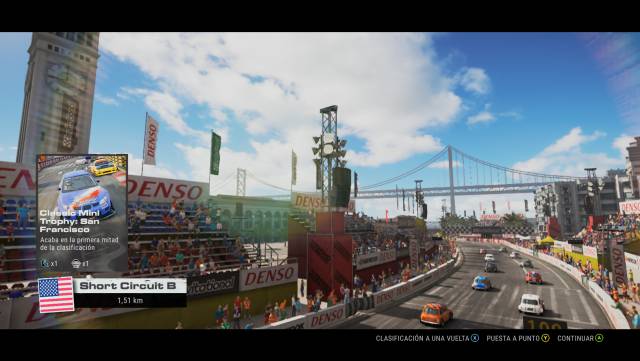 Continuing with the artificial intelligence of the GRID pilots, say that a good job has been done with it and this time up to 400 types of behaviors have been added to the game. From the one who lets go ahead for fear that you can destroy the vehicle to the one who cares about a pepper losing the bumper in order to make it difficult for the opponent. A fantastic job that is in the background in general.

The most bleeding aspect is here, in the lack of ambition programming GRID. The version that we have had access to is the one that has been released for Xbox One although we can almost say that it shares features with that of PS4. The modeling, textures – except in scenarios with a high polygon load – and details of the title scratch at a good level but all this has been built based on a resolution 1344×756 moving at 30fps per second, stable, yes. In the case of the Sony console, a dynamic resolution is used, reaching 1080p in a few moments, but few. This, as you can imagine, makes the video game look blurry at all times and the details that have been applied to the scenarios or vehicles go unnoticed thanks to it and the practically null use of anti aliasing. And if the image is scaled to 4K with a new batch TV the result is frankly bleeding. 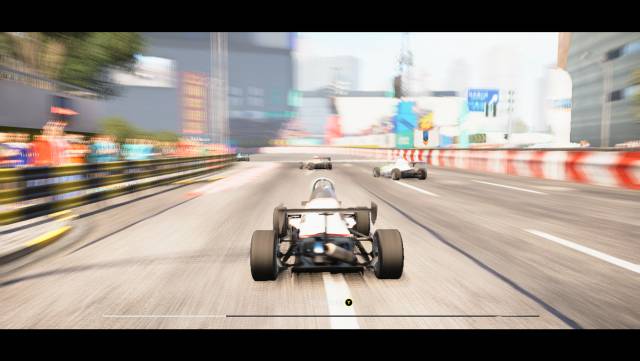 The vitamin versions of both consoles can reach up to 1440p in the case of PlayStation 4 Pro or 4K in the case of Xbox One X, using the two always dynamic resolutions and very stable 60fps.

In visual terms, it is a video game with good lighting, a well-known modeling of vehicles, a very immersive interior view thanks to its height – although not the best -, graphic effects and well-achieved resources – fireworks, confetti, sparkles etc ..— but poorly managed by the CPUs of the consoles. Or what is the same, for the lack of optimization by the programmers of Codemasters, especially seeing that other brown beasts of the genre of driving achieve better results in all its sections. It is as if they wanted to revive the saga with minimal effort. 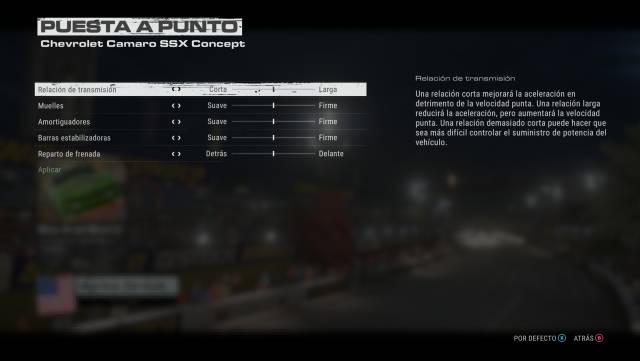 In the sound we walk in them with a soundtrack that passes without sorrow or glory and some sound effects on the part of the vehicles that will not go down in history for their quality or their extreme similarity with them. It is not an obstacle to enjoy the title but perhaps the most driving fans can find buts in this category. The game comes in full in Spanish, both texts and audio, although we are already somewhat tired of the voices in this type of games and with a moderately serious theme are narrated in a quinquillero tone.

Codemasters wanted to breathe life into one of their forgotten sagas with minimal effort. Not bad in content for a player but reluctance has taken over everything that involves playing with other users of the game. The handling of the vehicles is benevolent with the player although with certain touches of simulation that can confuse us when piloting them. Technically one of lime and another of sand; Overall result satisfactory but not up to the current hardware.