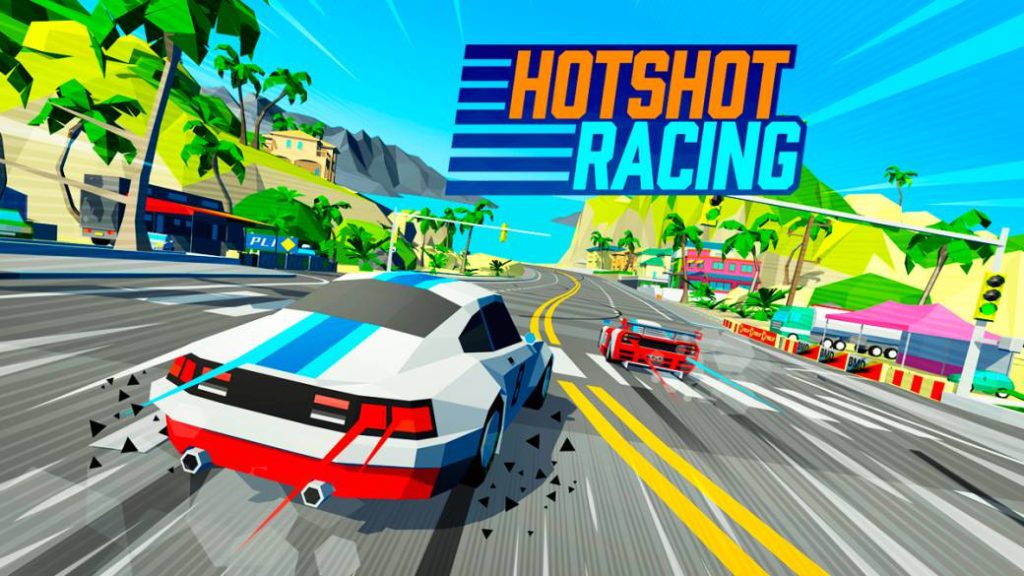 The spirit of the arcade racers of the 90s accelerates to full speed in this new low poly racing proposal for PC, PS4, Xbox One and Switch.

Fans of the most arcade experiences in driving games receive a new proposal after the recent Inertial Drift and art of rally with Hotshot Racing, the latest from Lucky Mountain Games together with Sumo Digital and the publisher Curve Digital, a bet with a marked retro personality that invites us to travel to the arcades of the early and mid-90s, a time when those mythical three-dimensional racing games that marveled us in our childhood began to proliferate. And is that if you fondly remember games like Virtua Racing, Daytona USA, Sega Rally or the legendary Scud Race of 1996, Hotshot Racing will enter your eyes from a first glance; not in vain, this new arcade racing game recovers the frenetic gameplay of the classics of the genre to invite us to live a direct and addictive game experience, with dozens of vehicles, several game modes and an explosive multiplayer offer for up to 4 players in local and 8 online, all in one title now available for PC, PS4, Xbox One and Nintendo Switch. Is Hotshot Racing up to par with the arcades of almost three decades ago? Check it out in our Reviews.

Hotshot Racing was born from the interesting idea of ​​a group of creatives willing to take us back to our childhood – in the event that we already paint gray hair – through a title with a marked old school character based on those pioneering titles of the 90s and who dared to make the leap to 3D in full swing of two dimensions, both in arcade rooms and on home consoles. And it is that it is not necessary to delve much into what Hotshot Racing offers to identify its main inspiration: those first polygonal speed video games. So much so, that while its aesthetic draws directly from a classic like Virtua Racing by Sega, its style of play is more similar to another classic of the genre such as Ridge Racer by Namco; And it is that beyond reaching heart attack speeds, Hotshot Racing screams that we master the art of drifting, both to overcome the most dangerous curves without wasting precious seconds and to load the different turbo bars, essential to keep us in the first places in the middle of the race.

The new representative of Curve Digital in the car racing genre offers its players an arcade experience, without frills or complications of any kind; From the first laps in the first game, Hotshot Racing makes its goal clear: race as much as you can to reach the first. It’s not like it’s a very original video game either, certainly, but what it does, it does remarkably well. The cars are handled with ease, each with its own characteristics that respond to one of the 4 types of vehicles available: balance, acceleration, skidding and speed. In practice, each player will find their type of racing car based on their driving style. As we say, the other decisive factor is the skidding, essential when facing the curves and, in turn, increasing the number of turbochargers in the chamber to use them at the decisive moments.

Of course, to achieve new turbo bars (up to a maximum of four) we must complete clean skids, as long as possible at the highest speeds and without crashing. Another effective method of refilling the turbo bars is to slipstream from other cars, while also achieving a little more top speed. All these race possibilities give Hotshot Racing a bit more depth to its mechanics; and although he did not invent the wheel – never better said – together it works like a charm. The experience at the controls is really satisfying and in a few games we will be drifting at 180 miles per hour with relative ease. Another thing will be to place ourselves in the first positions, something affordable in the standard level of difficulty but which will represent a challenge in the next two levels. This is when the artificial intelligence of the title comes into play, in many respects, unbalanced and even exasperating. 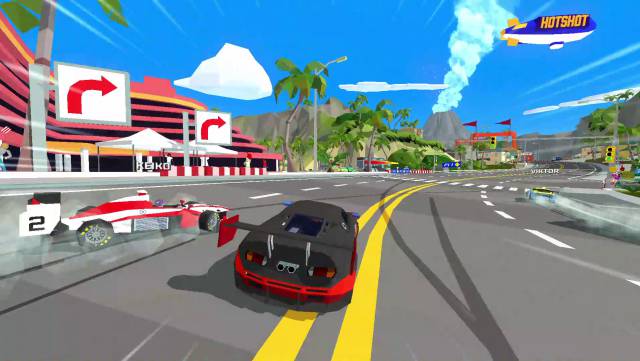 The AI ​​is not entirely well resolved, especially at higher difficulty levels. So much so, that the rivals are too aggressive, almost preferring the direct drive to find the perfect line; All of this is the result of the genre’s inherent frenzy, although we believe it could be better adjusted for a more satisfying experience. The other more obvious negative point is the manifest imbalance between the different cars; And it is that in the most demanding levels of difficulty, the statistics will not matter or if a vehicle has more facilities for skidding in more convoluted circuits. The rivals will be on our heels yes or yes, with top speed being the determining factor. We insist; This series of setbacks are noticeable in the high levels of difficulty and not so much in the standard mode. The hackneyed pinball effect, very common in this type of closed-circuit racers, is also noticeable more than desired.

But now let’s return to the most attractive aspects of the title, which are not few; and starting with their numbers and options, not negligible at all. Hotshot Racing offers several game modes, both locally and online. Thus, the star mode is none other than the Grand Prix through four competitions with four circuits each, with a total of 16 original circuits, also available in reverse mode. The settings are equally varied and will take us through the most diverse places, from mountainous to urban environments, passing through summer settings, ice creams and even inside a casino, all of them with a multitude of animated elements. 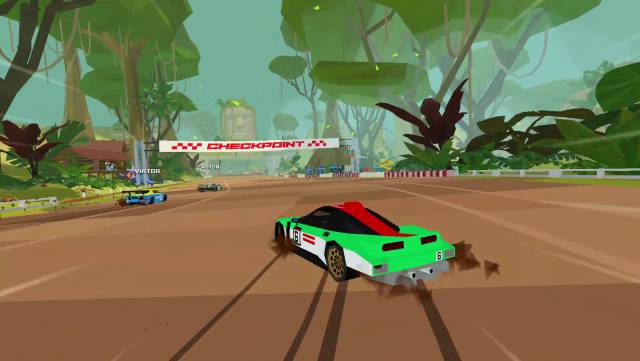 On the other hand, we have at our disposal up to 8 different drivers, with their own personality and four unique cars for each one of them, fully customizable, from paintings to all kinds of aesthetic accessories, both for the exterior and the interior of them. . And although they are fictitious models, many of them respond to real designs of iconic cars; car fans will be able to identify them without much trouble.

All these extras are bought with the virtual money earned with our exploits in the game, thus enhancing the replay value until all the content is unlocked (which is not little), thus ensuring hours and hours of play. Returning to the game modes, Grand Prix, as we say, invites us to participate in four tournaments of four races each, getting points for the general classification. In the race, our objective will be to overcome the different checkpoints within the time limits, all in the purest classic arcade style; the better the position, the more points for the final ranking. 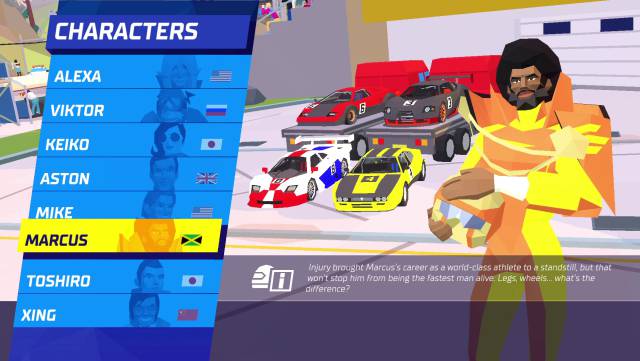 As a curious detail, winning a small ending is unlocked for each pilot. Along with the star mode, a time trial mode is also offered along with different arcade modalities, such as traditional unique races, the Polis y Robrones variant in which we can choose both the role of thieves (collecting money while fleeing from police cars) or by law enforcement officers (trying to stop thieves before they escape) and, finally, Drive or Explode, in which we must maintain the maximum possible speed so that our car does not burst into flames.

These game modes can be played both alone and in the company of other players, either in local mode (with split screen) or online, one of the most appreciated possibilities of the Hotshot Racing offer. And this is how fun multiplies exponentially, becoming one of the most striking attractions of the title, especially for those who enjoy sharing their games with their friends or family. Moving on to the audiovisual section, Hotshot Racing makes things clear from the beginning; Or you love it, or hate it. 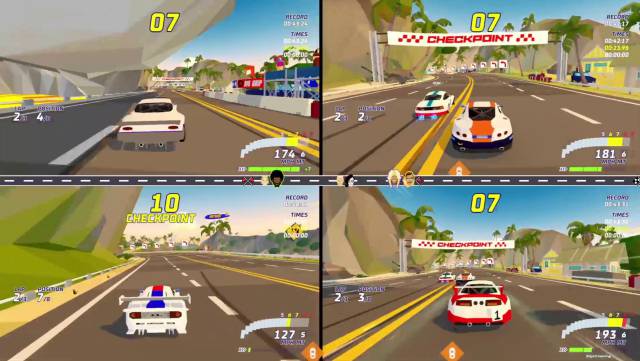 So much so that it deliberately opts for exaggeratedly flat three-dimensional graphics, in the style of the first 3D titles, with a vivid color palette and a very personal artistic design, as well as a performance, yes, at a high level, with constant 60 FPS at all times and without notable graphical mishaps. As a curious detail, several cameras are offered, including an interior one that shows the steering wheel and the dashboard; And how could it be otherwise, the sensation of speed is sublime. The sound effects, on the other hand, are very well selected through endless nods to the titles from which it is inspired.

Any fan of traditional arcade racing will know how to find the point with Hotshot Racing, both for its game mechanics and for its absolutely retro staging. And it is that maintaining the characteristics of the video games of the 90s genre, a title with enough charisma, game options (multiplayer modes are a guarantee of pure and hard fun) and levels of frenzy that the most veteran will know appreciate, as long as we accept some not so bright points and that slightly tarnish the overall assessment of the title.