You are here: Home / Call of Duty: Modern Warfare / Indivisible, Reviews. A successful mix of genres 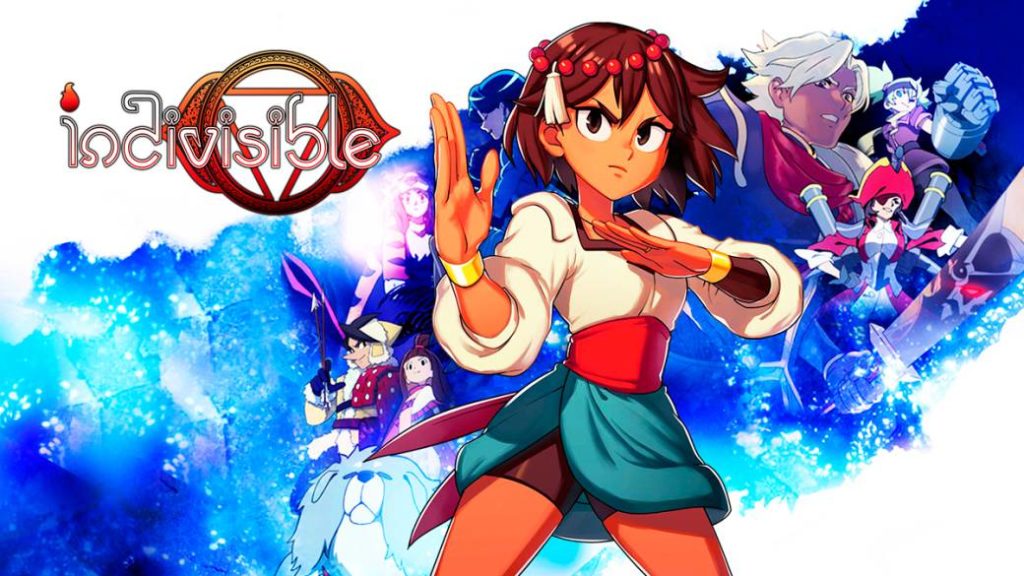 We analyze the new work of Lab Zero Games, the studio that Skullgirls designed and now offers a very platform-shaped RPG.

"The whole is greater than the sum of the parts." If you divide it, the result sets up a set of individual elements whose effect is less than when it is part of a whole. Indivisible, the new video game from Lab Zero Games, creators of Skullgirls, explores that concept. The protagonist, Ajna, is a girl of uncertain origins who has a special power inside: she is able to absorb her allies. The more you gather, the more powerful the group will be.

Throughout the adventure, Ajna comments on several occasions that her companions have the freedom to leave her whenever they want. However, his story of personal revenge against Lord Ravannavar takes a turn when he discovers the truth about his past. Its strength is essential to reach the end, but not enough if you want to end the powerful threat that hangs over the world and the beings that inhabit it. Strong allies, who fight together, are indivisible, because by themselves they have no chance of winning.

The argument, the weakest point

Indivisible's story begins in a quiet village. Ajna has been training with her father all her life, in peace. The mother, on the other hand, died long ago, so the girl does not keep any memories about her. A day like any other, he is doing his daily chores when, suddenly, the flames sprout and consume the town. The architect of horror is a gentleman loyal to Lord Ravannavar, a man who wields his sword against Ajna's father and murders him without contemplation. At the moment, the anger awakens and the young woman throws herself against the executor. The girl does not possess a weapon, only her bare fists … and a sleeping ability that she discovers at that moment.

That Ajna allies with her father's murderer in the following scene serves as an indication that one of Indivisible's weak points is the script without a doubt. The relationship between Dhar, the murderous knight and Ajna remains tense, as it could not be otherwise, but its development is superficial and uninteresting. The same goes for the main characters you are recruiting as the plot progresses. Without almost any justification, the different protagonists join the group. It is true that some lines are fun – and they are also well located in Spanish – but the general feeling is that it matters little what they tell us. In fact, conversations with the NPCs have been boring and very dispensable. 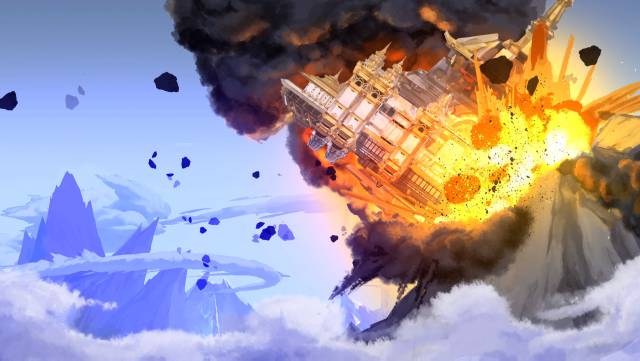 Charm and pampering. The work of Lab Zero Games, which began its journey under a campaign of micro-patronage, enjoys an unbeatable visual aspect. Its creators have hand drawn each of the aspects, something that is reflected not only in the sprites of the characters, large and detailed, but also in the wonderful backgrounds and animations. The two dimensions feel like a ring to the finger and are covered by a soundtrack at the height, composed by the musician behind the scores of Secret of Mana, Hiroki Kikuta. Special mention to the very powerful images of the video scenes.

The gameplay has nothing to envy to its graphic finish. The developers have managed to fuse RPG mechanics and platforms in the same product, all enhanced by level designs that introduce the Metroidvania touch. Together, we are facing a production that has enough ingredients to offer something original, within which its individual aspects are not innovative per se. We return to the beginning of the text to retrieve the phrase, somewhat manic, yes, but perfectly illustrative: "The whole is greater than the sum of its parts." As a cohesive product, Indivisible works in all its aspects, with the exception of the aforementioned story, which is far from the scripts of the best RPGs. If we forgive that, the interested player will find a fun proposal to the controls, challenging in some moments, especially if we decide to deepen and make the most of everything the world provides us. 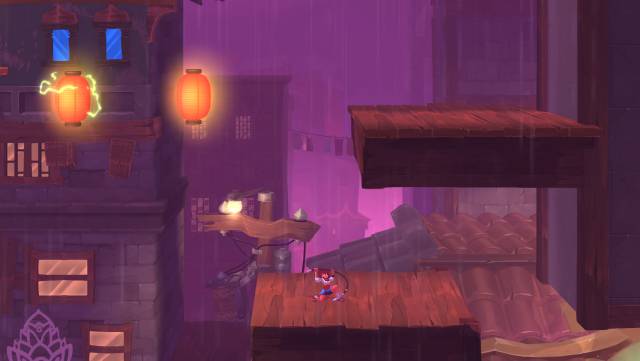 The exploration part at first seems simple. The jumps run without major problems and reaching our destination does not require too much skill. However, as the levels pass, the level rises accordingly. It is not that the main parts are impossible for the less skilled, but there will be intervals in which you have to repeat a few times the jumps until you find the correct formula. In any case, the save points are numerous, so you will rarely see yourself at the crossroads of having to retrace all the way to return to the same point. Of course, even in the exploration phases there is a life bar. If consumed at all, the character will fall and we will resume the trip from the last save point.

Little by little, new skills and weapons are added that allow us to make different movements to reach previously unattainable places. However, obstacles make it more complicated. Skewers that leave the floor or the wall, bounces on the walls when fireballs or platforms that fall in a matter of a second fall on your head are just some of the vicissitudes that you will find during the journey. For example, at a not very advanced level, we must play with the wind to try to shoot an arrow against the tail of a huge worm. To do this, it will be necessary to position yourself in the right place, get the bolt through different air currents and free the way to the giant bug. 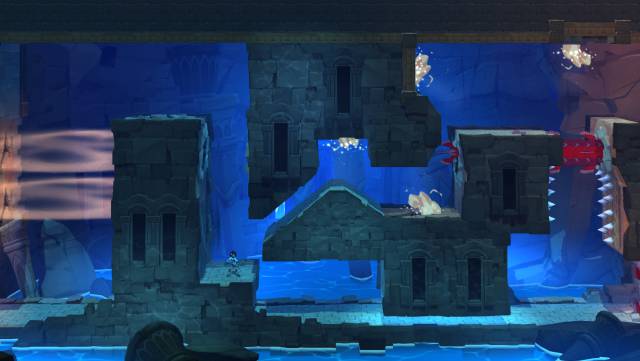 Indivisible is one of those games that invite you to explore beyond the main story. Because as we said, the title does not engage in its argument, but in the structure and playable mechanics. Fighting against the dark forces and Ajna's enemies implies that the character has to be strengthened. Ending all of them is a possibility, but in the scenarios some gems are hidden that allow us to increase the defense or attack. We will need a certain number to be able to do it, so if we want to squeeze the levels to the maximum and get hold of them all, we must be alert, manage the map and master the mechanics of platforms.

Despite the initial linearity, the different paths open options to explore beyond what the main story has in store for us. In addition, when we reach a certain point of development, we can even choose which destination to choose before. The port of Maerifa, a nerve center controlled by the Iron Kingdom, stands as the strategic place that connects certain important destinations by sea. In our departure, we chose the Iron Kingdom as the first destination, but when we reached the end of the phase, we realized that we needed an object if we wanted to access the upper part of the roof. So, we were forced to return to the port until we get the rope. 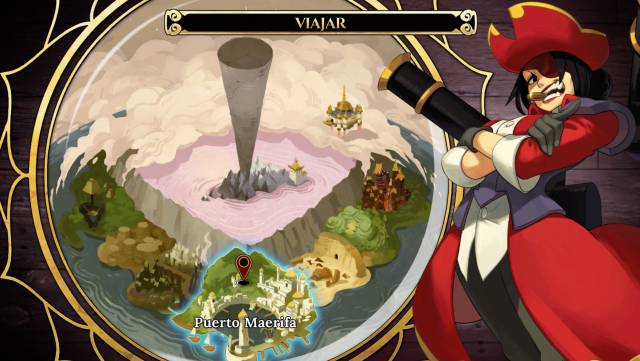 The combat system: turns and action

Those who have played Valkyrie Profile will notice that the combat system drinks directly from this video game. In fact, its creators have not hidden this influence when it comes to building combat. As in so many current RPGs, enemies can be seen from afar and we can hit them before to gain an advantage over them in the first seconds of battle. The opposite will happen if it is they who attack us before. Not all are easy to catch by surprise, because some enemy protects or moves at high speed.

The group of four – the player will depend on which characters accompany him – fight in turn-based fighting. Each of them has an assigned button that is indicated on the screen and that serves both to attack and to defend itself. During the turn, we can press the button (square, round, X and triangle) and proceed to the attacks. But in addition, that system acquires depth thanks to the fact that if we press up or down on the crosshead and keep the character button, they will perform different strokes. We have the possibility, even, to press all the buttons, with which the characters will attack all at once. The system works very well, although some battles are somewhat heavy. The strongest enemies have a hard time biting the dust. In addition, there is little depth in RPG mechanics. Apart from gaining experience and raising levels, it is not possible to customize the character or choose skills.

Defense is a work of coordination. A monster can harm an ally or all at once: in the first case, just press the button assigned to the character at the right time, while if the range is wider, we can protect everyone at once. In what cases, the difficulty is double. On the one hand, the speed at which combat takes place; on the other, the lack of visibility, for example, when one of the protagonists is too large and partially covers the interface.

Special blows aside, that there are, the most interesting happens in certain battles against final enemies. Suddenly, the battle system stops taking turns and we handle Ajna, who must avoid and attack the opponent with platform and action game mechanics.

Together, Indivisible is a varied proposal that mixes its ingredients with success.

Indivisible combines RPG mechanics, platforms and metroidvania in a production that attracts attention for its visual appearance, but that hooks for its playability (and disappoints a bit for its history). The exploration part is challenging, full of jumps in which we must use all the tricks of the character and the player's own ability. The fighting, in turn, works similar to those of Valkyrie Profile, that is, with a button assigned to each member of the group (four in total) that we use both to attack and to defend ourselves. In all cases, pressing it at the right time is essential if we want to get out of the battle. It is curious that in some combats there are interludes in which we handle Ajna directly, who must dodge blows and attack the enemy with the mechanics of action and platforms.