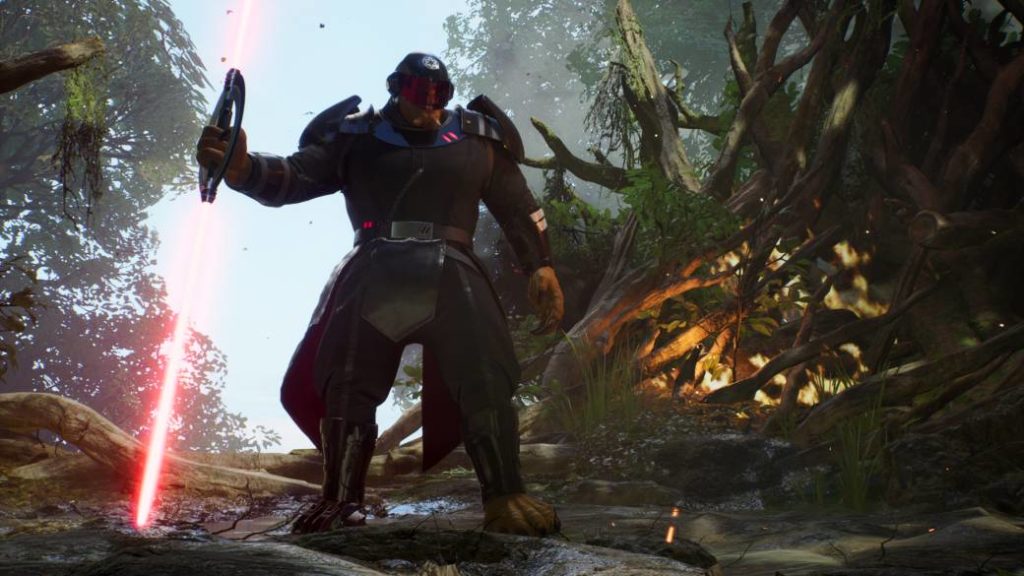 We had the opportunity to play Star Wars Jedi: Fallen Order of Respawn Entertainment in Anaheim, California at a hotel near the local convention center. Prior to Hands-on, two inquisitors or Purge Troopers and a second sister inquisitor jealously guarded the venue where we would play the title for 3 hours.

A preview of what we will see today with @EA pic.twitter.com/J8aIR33ke7

The version we played was PC on machines with NVIDIA GeForce RTX graphics cards at a resolution of 2560x1440p with the graphics configuration in epic.

The first part of this test was to make a tutorial inside a cave to familiarize ourselves with the basic movements of the game.

In this title we will control Cal Kestis, a former Jedi Padawan who has been hiding on the planet Bracca since the events of order 66. He joined a group of junkmen and lived hidden for years, but revealed his identity by using force to save to his friend Prauf from a deadly fall. Because of this, the ruthless second and ninth brotherhood attacked him. Cal was saved just in time by two mysterious characters: Cere Junda and Greez Dritus. The story of Star Wars Jedi: Fallen Order will begin on the remote planet of Bogano in search of an ancient vault that stores Jedi secrets. 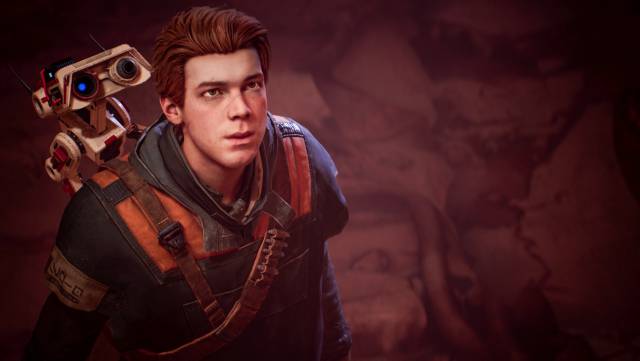 Before we started, we explored the character's menu and saw that the game has a skill tree that is evolving in a similar way to the Final Fantasy XII experience system. In this, you will accumulate experience points to place them in the skills that best suit you.

In the same menu when moving with the triggers, we find that you can modify the character's ponchos, BD-1 costumes and the painting of the mantis ship. It should be noted that in the period of time we were playing, we found a kind of loot boxes that were giving you these additional ones, this is undoubtedly a great prize for all exploration lovers. 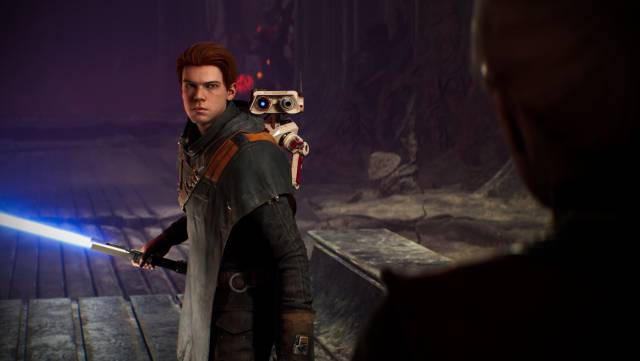 Within the chapter that we had to play, we could see that our Jedi can walk on the walls when jumping, very much like Tomb Raider when swinging through the vines and climbing in a similar way to Lara Croft with the tips on certain walls .

As for the use of force, this plays a fundamental role, since at the beginning we had only the power of slowing down, which you can use in close combat or to control some elements such as fans to access certain areas. As we moved forward, we reached a point where we unlocked the Jedi 's own push. It is noteworthy that when we made this movement, it was contextualized with an animation in which he showed us part of the character's teachings when he was just a Padawan, this seemed to us a nod that the fans will undoubtedly appreciate.

Attacks per se are basic having the strong and light that, in combination with strength, make battles more dynamic. As in other installments, there is a defense button, which if pressed with a certain timing, triggers a slow motion sequence, similar to the Marvel’s Spider-Man that allows us to attack from another profile. Like if we act when we are shot with a laser, we can bounce the rays to eliminate our rivals. Also if we press the button, it uses the sword as a shield, although it must be stressed that, if we exceed, the energy is reduced and this can cause us damage.

Another fundamental element is the use of BD-1, the nice android that accompanies us as a pirate parakeet on our shoulder that will help us heal. This in turn has other functions, such as scanning enemies that we do not have registered in the logbook, to create a tactical guide with all enemies, which will help you if you have forgotten what your weaknesses are. This scan also serves to read some points of the levels and thus form the database that will help you better understand the story. Cal Kestis for his part also has a similar ability, but uses psychometry at some points to perceive information about what happened there.

The stick for its part has functions such as the activation of dialogues, opening of boxes or doors and for running. 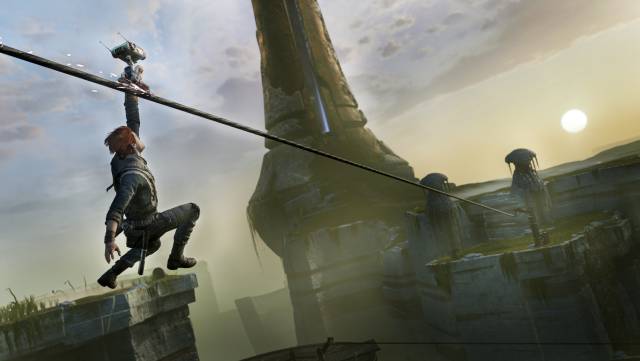 We will have to adapt to the demands of each planet

These points are key and have nuances in the style of Dark Souls, in them you can assign the experience points in the skill tree and rest, this last option is strategic, since it “resets” the level, reviving the enemies and returns the power to cure BD-1.

One of the things we liked the most is the map, something key to advance on the huge planets. This includes three-dimensional holographic signals such as:

In fact, in this previous several colleagues from other media were lost due to the immensity of the levels, so this is key to finding the objectives. 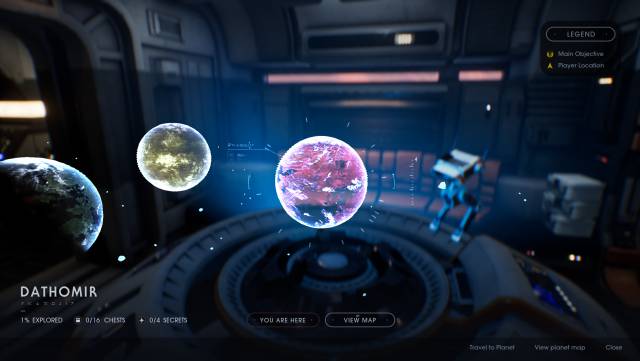 Each planet will be a completely different challenge

The Dark Souls of the Jedi

At the end of the test of the first chapter we had the opportunity to fight an AT ST like those in Star Wars Episode VI: The return of the Jedi and the dynamics is similar to the game Hidetaka Miyazaki but with steroids. In fact, just at the end of the test chapter, we play against a more advanced enemy and find a degree of difficulty worthy of a fan of Dark Souls games with the additional that integrates dialogue sequences that give context to the fight.

However, during our adventure we will also find sub bosses that require similar strategies to defeat them.

It should be noted that for people looking for a lighter experience, the level of difficulty can be changed. 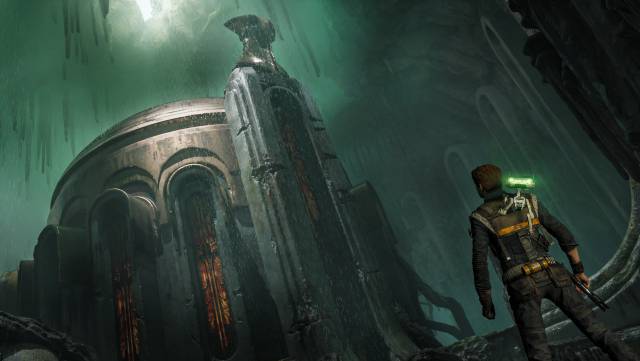 The ship, our Hub

One of the key points in Star Wars Jedi: Fallen Order, since in it we will find a table where you can customize the lightsaber with elements that you find during the game. Here we can change the color, emitter type, the shape of the switch, handle and its material.

We will also find a table with soil to sow seeds that we find so that later Greez will surprise us with the results.

Finally, at least in this demo we had the holomesa, a kind of main map where we saw the planets through which we could move. In this hands-on we had access to Zeffo, Dathomir, Kashyyyk and we were in Bogano. In this board we can visualize the percentage that we have of exploration.

In fact, just we managed to jump to the planet of the wookies and we found a completely different game mode where we managed to control an ATT like those of Star Wars Episode V: The Empire Strikes Back, here the interesting thing is that the way in which we had to address it was similar to Shadow of The Colossus. 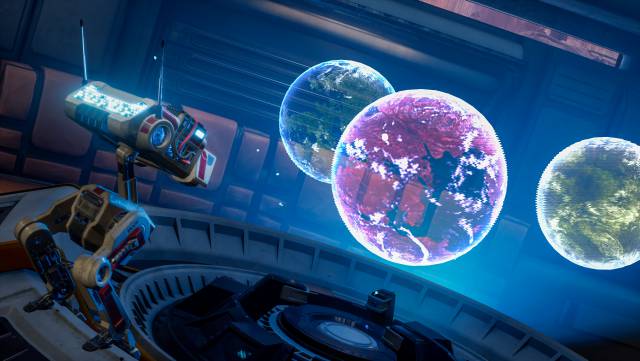 The visual title seemed spectacular to us, in fact, if it gave us the feeling of being in a galaxy far, far away. The interesting thing is that it is full of references to movies and nothing is left behind what we have seen in the last games of this generation of consoles. Despite not having confirmed ray tracing, we saw emulation of this effect in some areas with water. Another detail that stands out is that the laser sword leaves marks on the floor or walls and in battles, it has a monumental sparking effect.

One of the points that shines the most, since it takes full care of the sounds of the franchise, including the soundtrack. On the other hand, we saw a great realization with the synchronization of the dialogues with that of the characters.

Undoubtedly, this installment will fully fulfill everything that fans of the series can expect and for those who are looking for a single player experience with all the elements of a good video game, this title will definitely surprise you.

Star Wars Jedi: Fallen Order will be released on November 15 on PC, Xbox One and PlayStation 4 and will be available in both Standard and Deluxe versions. Likewise, a 1TB Xbox One S console package with a copy of the deluxe edition will be available.