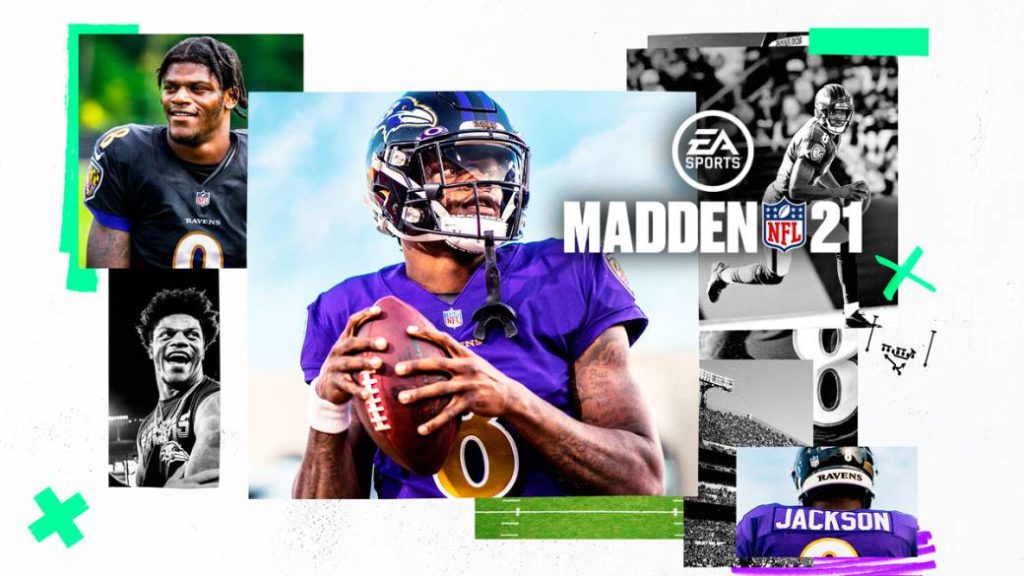 An alarming lack of novelties in all its aspects makes Madden NFL 21 a step back for the franchise, in need of changes in the new generation.

The teams are already preparing, although the beginning of the 2020/2021 season in the NFL is something, like almost everything in these times, a complete unknown. This is not the case in the case of the pertinent arrival, as every season, of a new installment of the most veteran sports franchise of all that Electronic Arts has, and Madden NFL 21 is not lacking, how could it be otherwise, to the appointment. The current MVP Lamar Jackson, the doubly victorious Patrick Mahomes (ring and contract in summer) and all the changes that have come, such as the name of the former Washington Redskins due to the racial situation in the US, or the new shirt that Tom Brady will wear (that of the Buccaneers), are just some of the attractions of this uncertain season, all of them reflected in this new installment. Unfortunately, the Canadian company has not been able to change on its own and suffers from obvious exhaustion, partly the result of hardware that does not give for more, but also, and this is not inherent to a final generation, to a certain laziness.

Insufficient changes on the field

Let’s be frank: it is not easy to offer every season a product that feels like new, especially in the case of sports titles, and even more so when they have reached a certain level of quality, especially playable. In this case, and although it is far from perfect, Madden’s gameplay has been without much change for several years, each year needing a couple of tweaks here and there, this time offering the so-called skill stick. Namely: each movement of the ball carrier -player who carries the ball- is carried out with the right stick, being able to feint to one side to go to the other simply by turning right or left or doing a reverse by making a movement of 90 degrees, Without going any further, actions previously assigned to the triggers, for example. 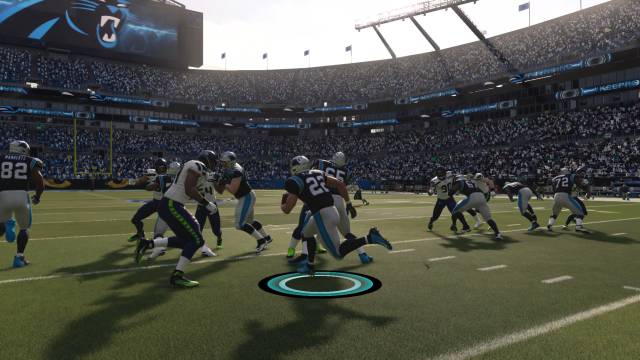 This twist of the screw has a great influence especially in the racing game, which increasingly requires more skill on the part of the player – we always start from the premise of playing on All Pro difficulty or higher – and above all, of having patience , find the hole opened by the offensive line, and start. It is also something that the wide receivers will appreciate, although we already know how difficult it is to get YAC -yardas after the reception- in Madden, with which the running backs are the main beneficiaries of this change, especially when the defense against the race continues to be exceptionally effective.

Unfortunately, this and a new change in the management of defensive linemen after the snap – it is no longer that kind of quick time event – are the only changes at the playable level, remaining some vices from previous deliveries and certain glitches in contacts, tackles and somewhat jerky animations. The defense will continue to get impossible interceptions, our receivers dropping incomprehensible balls…. It is true that all this is completely configurable thanks to some very complete sliders, but dragging the same errors year after year seems something that takes little apology. No evolution can be seen in the passing game, in defense by linebackers and defensive backs, the playbooks are the same year after year … We believe it can be said that the sales success and the lack of competition have contributed to EA has rested on its laurels in the face of a delivery that, on the field, evolves very, very little. 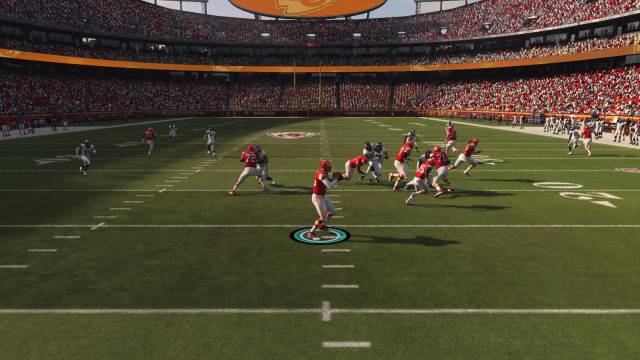 Conservatism in its ways, even steps back

When we navigate through the menus of the different game modes is when we realize that, unfortunately, we have even taken steps back. This is the case of Career mode, which seems to have definitely adopted the name of Face of the Franchise, and which is far from the quality levels reached by Longshot and Longshot: Homecoming, which had some of the best stories not already of Madden , if not of any sports title. Any resemblance to FOTF is mere chance, and that is that after a cursory editor, we move on to a bland narrative part in which we will be the typical underdog in the shadow of the starting quarterback who, after a twist of fate, happens to have his chance. Throughout this narrative we are presented with different conversational options that, to make matters worse, lack impact on the story, since the reaction of the characters to any of our decisions is always the same. In fact, during a game session we tried two different options – one asking for forgiveness and the other sticking our finger in the wound – and the result in both characters present was exactly the same.

The presence of college football is no less relevant, playing only a few games with our selected college – among a variety that includes the best NCAA football programs such as Texas, Oklahoma, LSU and more. In addition, we do not know if they are designed to act as a tutorial but they are tremendously boring due to the zero challenge they propose, having achieved exaggeratedly bulky markers during our session. It is undoubtedly an uninspired way on this occasion, and after which even at the end of this part of the story we will not find enough incentives to continue further, by following a similar structure to Franchise, with the exception, obviously, of focusing on our player. 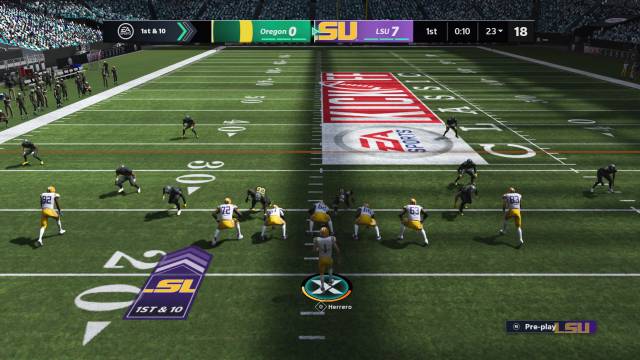 And since we mentioned Franchise, let’s talk – or sing a homily in her honor – in this way, once a fan favorite and completely ostracized today. We do not know if it is doomed to disappear completely, but everything seems to indicate that EA’s interest is practically nil, as shown by the fact that not only is there no news, but even the interface is exactly the same as in the 2019 edition. It is not an isolated case, and this type of modality is increasingly in the background in almost all sports franchises, but we believe that at least a minimum effort is needed to offer, even slight changes, instead of a mere copy and paste of Madden NFL 20. Too bad.

Meanwhile, the increasingly famous Ultimate Team continues to offer a considerable amount of content, with a good handful of challenges and where the football fan will probably spend the most time throughout this season. Collecting is already a very important part of sports games, and therefore, with the inevitable presence of microtransactions, more present than ever and with prices in some really exorbitant envelopes. Despite being a mainstay in EA’s economy – FIFA’s FUT packs have long paid more than the sales of the game itself – it is surprising to see how, like Franchise, the presentation has hardly changed. There is some more challenge, yes, but it is basically the same, taking for granted that the player will have to invest many hours – or some real money – to progress without getting frustrated when it comes to beating the copper in online matches. 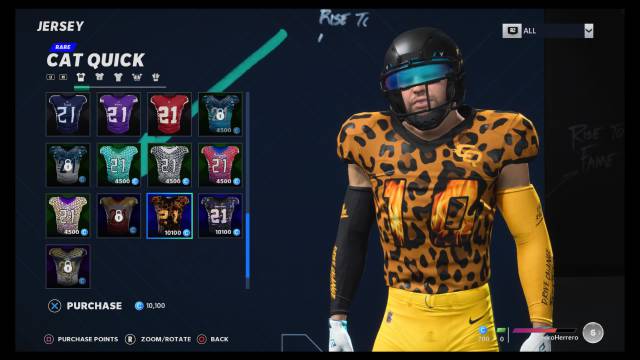 Luckily, EA has seen fit to implement a novelty among its game modes offering, such as The Yard, a kind of 7 vs 7 street matches where the rules change slightly, such as the possibility of giving unlimited passes behind the line of scrimmage. It is direct and it is fun, being able to play online in matches that are reminiscent of those of the NBA 2K Neighborhood – saving distances in terms of depth, which are many – but it is difficult to know the impact that this mode will have in the long term, once past the fever for novelty. Of course, again we find the presence of microtransactions for various outfits for our alter ego, the vast majority of them so indescribable that it is best to simply take a look at the screenshot on this paragraph.

That praise weakens is something that is more than evident in Madden NFL 21. As in real sport, the victory – great sales numbers, good reception in critics and the public – often hides the sad reality: not everything is doing well. This new installment lacks playable continuity, something that at this point of generation is almost taken for granted, yes, but also in terms of content, which is more difficult to forgive. The Franchise mode is totally abandoned, Face of the Franchise hits a blind spot with an uninteresting plot section, Ultimate Team hardly presents any new features … And The Yard is fun for a while, but unless dynamic challenges or events are offered, no a very long journey is in sight in this peculiar season. Renew or die, and the arrival of a new generation seems the best excuse.