You are here: Home / Medievil / MediEvil, the return of the PlayStation Paladin 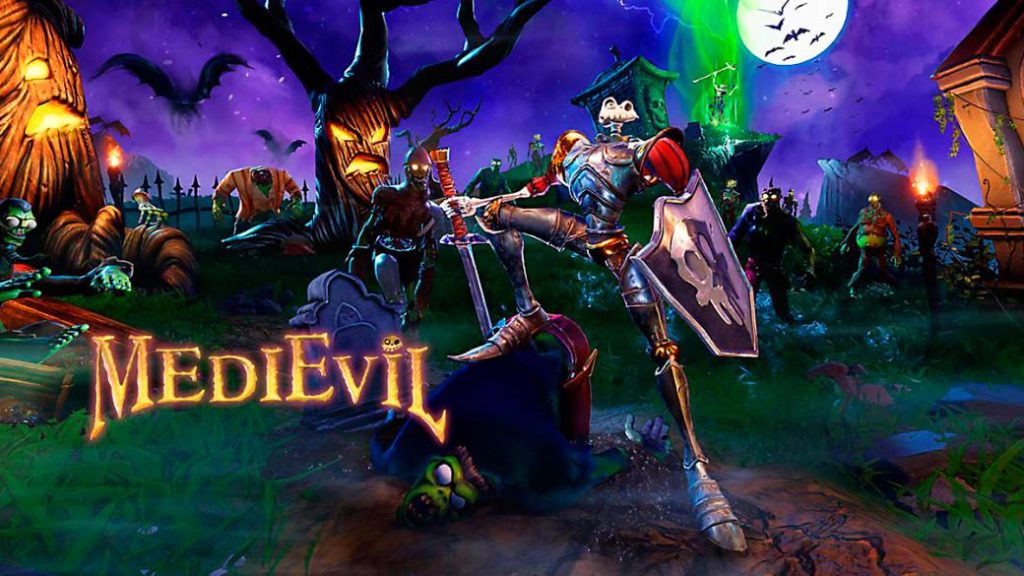 The Hero of Gallowmere rises for the fourth time from his grave to look at a present that at the audiovisual level feels luxurious.

"Teach me a hero and I will write you a tragedy," F. Scott Fitzgerald

Few studios have Sony with a curriculum full of works as good and vindicable as SCE Cambridge Studio. Author of jewels like Primal or Ghosthunter on PS2, SCE always had his greatest creation in what was his first 3D game: MediEvil, an exclusive of the first PlayStation that 21 years ago introduced us to Sir Daniel Fortesque, hero of slug and really Ugly face – the art book reveals its normal face – which has finally happened as one of Sony's icons.

And, with just 3 games in total in two decades and an appearance in that attempt 'Sonyer' to get into the car of the success of Super Smash Bros that was the forgotten (and fun, eye) PlayStation All-Star Battle Royale, Sir Daniel is still remembered, although 14 years have passed since that PSP MediEvil Resurrection. For this reason, when in full fever of remasters and remakes Sony announced that one of its characters from the first Gen PlayStation would undergo a change to go out and look handsome on PS4, the hype and the desire to have it again with us were shot , especially with the ideal date chosen by Sony: 1 week of Halloween.

For those who have not played it, the MediEvil series is a mix of hack ’n slash in 3rd Person with doses of exploration, puzzles and platforms. A usual mix in the 5th Generation in which the puzzles act as a kind of ‘barrier’ to stop the quasi-linear advance of MediEvil. As a good hack ’n slash, it’s hitting and moving forward, but its gameplay becomes more complex, giving it more elements. In this way, its basic definition is a kind of Ghost & Goblins in 3D designed by Tim Burton and mused by Danny Elfman. 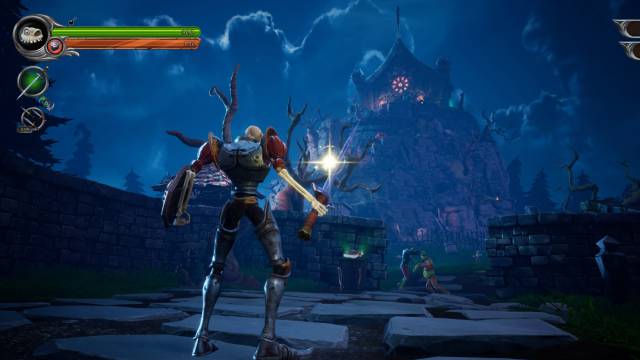 Basically, this new MediEvil is a remastered and remaked version of the first game in the series, which would officially be the 3rd time we lived the same story – PSP's MediEvil was a remake with better controls and new scenarios and elements. The Other Ocean Emeryville studio, with experience in Double Fine titles such as Stacking, Costume Quest 2 and also authors of Thimbleweed Park or the New 3DS Minecraft, has preferred to discard the changes in the PSP MediEvil to keep the original source. The result? Well, a game that those who have played the original will recognize right away, because they follow it closely together both in the plot and on the stage.

I enter it with the story of Gallowmere, the CGI of the sorcerer Zarok -which at the time of PSX seemed to us the ostia and made by Pixar almost-the crypt of Dan, the cemetery … Everything is there, but with changes. Although less than we would have liked, because if in a way we can define the MediEvil of PS4 it is like a remaster in the playable and a remake in the graphic.

The Gallery of the Heroes

The Overworld map is still there, and Dan's journey to reach Zarok's lair remains. To this we add that there are some moments in which the campaign allows us to choose between several paths. And we also have the Gallery of Heroes, a place to which we must access a hidden chalice in each level that must also be filled with souls. 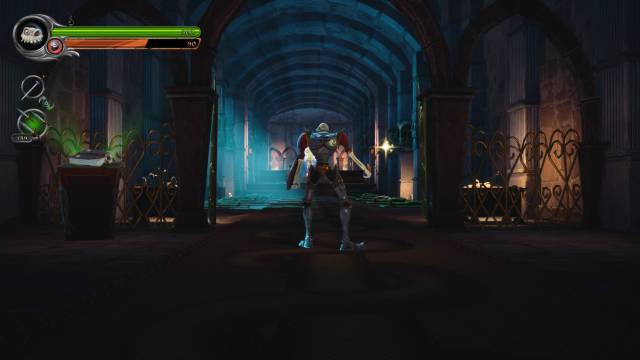 Finding them all unleashed the true ending in PSone's MediEvil, is the same in PS4? You will have to play it to know it, although it certainly adds a grateful 'backtracking' element to the quasi-linear development so that you explore and retrace your steps before continuing to another of the 22 levels that it has, in which the variety of scenarios and enemies is one of his tricks. MediEvil is a game with a campaign of about 7-8 hours, although they can be more given their Final Bosses of unequal difficulty and also an element that demonstrates their Old School game condition: checkpoints.

And if you are killed somewhere in a level, even if you are already facing the same Final Boss, you have to return to the beginning of the level since there are no mid-checkpoints in the middle of each phase. Of course, among the tasks that lost souls will entrust us and recover all the chalices, the duration increases for the completists, and there is even a surprise to achieve 100%.

A remaster in the playable – The Infernal Chamber

One thing that this MediEvil has is that it serves to study the difference between remaster and remake, staying halfway in general but with elements that bring it closer to one or another definition. The worst, what really weighed the original were its controls and its camera, and that happened because SCE had no experience in 3D games. The camera has been retouched, softened and it shows a lot, but not as much as we would like. 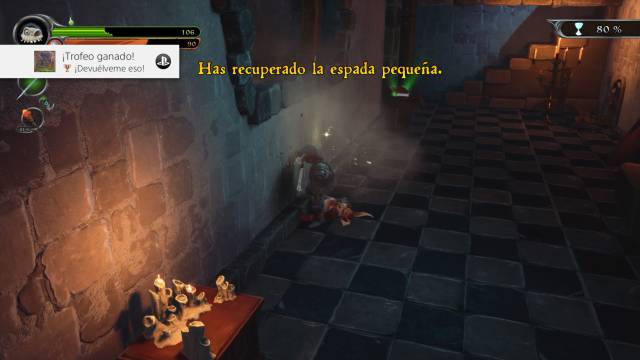 In most of the game it is free, and it is repositioned manually using the right stick, but its speed is very slow, it cannot be customized and therefore it gives the feeling of frustration when we need to change it quickly and we have to wait for it to slow down panning If we need a 180º turn in the view we can press the two upper buttons of the pad. And with one of them pressed we switch to a very useful view on the shoulder of Fortesque, ideal to see the details of the stage – but be careful when using it in combat, because it is chaos.

What happens then? That the design of some scenarios, or areas within those scenarios causes the camera to get stuck (it is Old School even in that), and leave us sold to enemies or life-removing obstacles like the damn glass skewers. It also has another 'retro' element such as the jump to a preset camera in certain scenarios – you will notice it in the Asylum Grounds -, which makes it a Resident Evil and again annoys the enemies, in addition to granting roughness to Sometimes to the advance with the unexpected change of perspective, a shame given the enormous design of some levels.

Let's go to the combat system now. We talked about a hack ’n slash, with the fun that it entails, but very limited. We have two melee and two ranged attacks, with a third one consisting of loading one of the attacks to do more damage. We can defend ourselves with the shield and move sideways in parallel, although most of the time you will be crushing the button of the simple attack and carrying that of the strong attack against enemies that look like floating balloons of the low weight they have.

Luckily, we have a good arsenal of weapons in which long, magical swords, batons -which you can use to find secrets-, crossbows, knives to throw and even chicken legs with their own skill -genials, because each enemy al That we hit adds health. Without a doubt, hitting at a distance with the crossbow is the best thing to avoid losing health or weapons. The grace is that some have limited projectiles, others a% until they cease to be useful. Some enemies can even steal them from us, and we can only equip 2 at the same time as alternate in real time – no doubt about the best news that has gotten into the game.

This gives a shot to the combat system, which on the other hand accuses its time and lightness, making it simple and sometimes inaccurate, being absurd the comparison that Sony itself has made with Dark Souls – those who have not played MediEvil and think that it is a Burtonian Dark Souls, not far away.

So what is that note coming from? To the charm that suppurates the whole game, to the experience that is MediEvil, which in the graphic section itself is a remake and not a mere resolution jump. Everything looks more colorful, with a good lighting system, a gothic-medieval set of pumpkins, ghosts playing Church organs, chichinabo zombies, spectacular Bosses such as the one in La Cristalera – the nod to Pixar, by the way. A cartoonesco sense that the Tim Burton of the 90 would sign without a doubt. 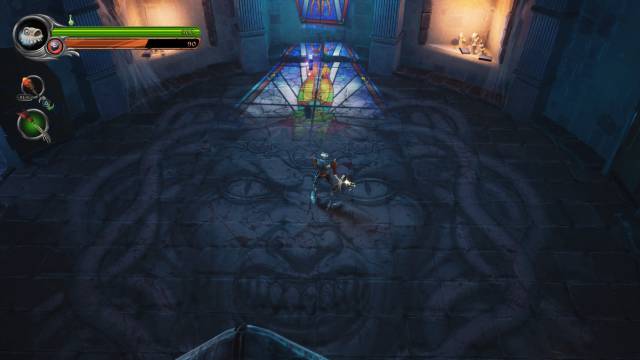 Nothing better than putting a comparison of MediEvil on PSX and PS4 to see the difference at this level. A pity that the framerate flirts sometimes, although in general it maintains 50-60 frames-, and that many of the textures approve more for color than for quality. Although the whole enters through the eyes.

And loudly, this is 10 absolute. The BSO, which was already a jewel of the Bob 'n Barn duo, has been re-recorded with an orchestra to sound more powerful, maintaining the Elfman mannerisms that inspired the original: orchestral outbursts, choirs in Fortíssimo, organs, tubas … To this we add a redouble in luxury Castilian like those used by Sony, which improves on the original and with the surprise of retaining several of the voices we already heard in 1998 – except in some cases as the intro narrator.

Sir Daniel Fortesque has returned. For years we wanted to use these words, and although it was not with something original, but with a new version of the original, just for the charm and the audiovisual leap it is worth it. For the fans it is an absolute gift, for the rest, if you have tried the demo and you know how the limp camera limps and how the combat system is, for 30 euros it is an ideal experience for October 31. A pity that this visual remake stays closer to the playable remaster. Although to fix the camera of the original, it is clear that it would have been necessary to redo the game completely in this section.