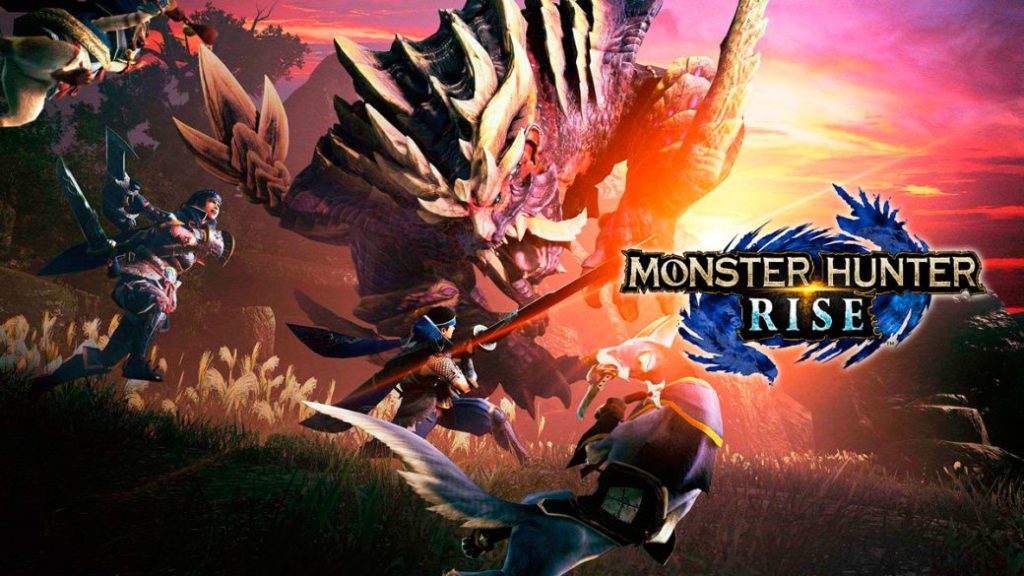 We attend a digital presentation with an hour of Monster Hunter Rise gameplay and we know what the day to day will be like in the village and on the expedition.

Monster Hunter is in a sweet moment commercially and decisively creative. After consummating its classic formula with Monster Hunter 4 Ultimate and Generations, which put an end to four generations with a very specific way of doing things, Monster Hunter World broke into domestic platforms with the intention of experimenting, of opening up to the general public; to explain to millions of people why so many others were enchanted by this playable formula in the days of PSP and Nintendo 3DS.

Now a new episode of that story is written with Monster Hunter Rise, one in parallel to World, perfectly compatible and complementary. We have attended a digital session organized by Nintendo Spain to calmly and deeply see an extensive gameplay guided by Capcom that helps us to tell you now our feelings before embarking on the Reviews. We anticipate something: this promises, and a lot.

Welcome to Kamura, the backbone of Monster Hunter Rise

If the demo of Monster Hunter Rise last January was of any use to us, it was to verify that great changes await us in playable matters, with special emphasis on agility in tasks of movement around the stage, verticality thanks to the use of the chordopter, and commitment to make exploration something natural, not required. A more organic title. 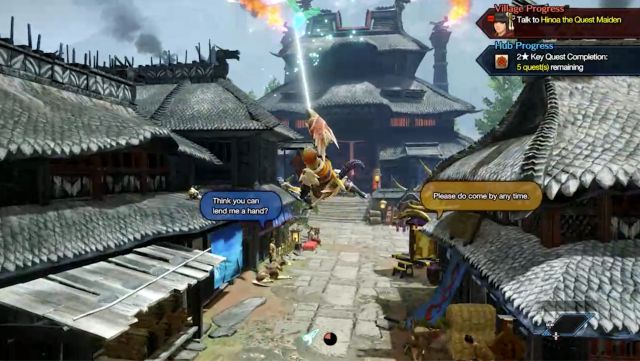 The scenery of the environments is spectacular.

The series led by Ryozo Tsujimoto, this time with Yasunori Ichinose in the direction – who has already directed Generations and the famous Freedom Unite on PSP – has very established rules regarding the structure; everything feels familiar from the beginning, but any lover of the series knows how important it is to feel comfortable the gameplay as the handling in cities and villages. What we could define as a lobby, as a base of operations. The layout of the stores and meeting points has not always been achieved with the same success; however, in Monster Hunter Rise the intention is perceived to make things easier and expedite procedures. Our time is valued. Kamura Village, as this territory overturned by the Japanese setting is called, is the core of the experience outside the battlefield and where we can use, by the way, the chordopter to move at greater speed. It is not an exclusive item for hunting (as was the case with the hook in World), nor are the Canyne / Palamute, on which we can ride in the middle of Kamura.

Right from the start, shortly after the presentation began, we listened to a traditional Japanese song in an environment surrounded by cherry trees. Monster Hunter Rise makes you feel in the Land of the Rising Sun of centuries ago, a reproduction that will appeal to both Japanese and Westerners.

The Cantina features changes from Monster Hunter World and previous iterations of the series. When placing an order – we can pay with money or points, as always – this establishment has menus such as a Bunny Dango (traditional Japanese dumpling usually served with green tea), those skewers with balls of different foods and combinations of flavors . It comes to the game that neither painted to mix flavors, each with an effect on our hunter or huntress on the next hunting expedition. In total, we have to choose three, with an individual activation percentage generally very high but not guaranteed. Health, stamina, attack … even activate temporary passive abilities. Another different way of ordering great delicacies of meat and fish, only this time it is committed to something more sophisticated and … Japanese. 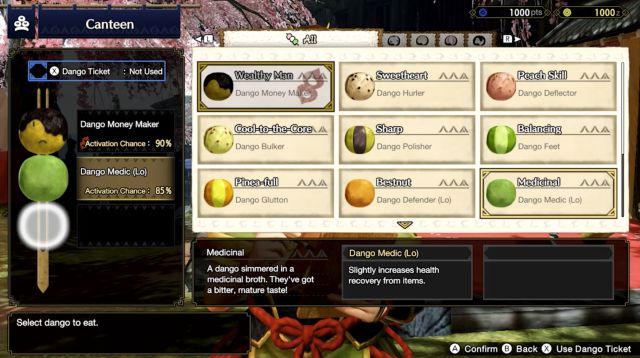 Once we have taken our dose of calories, we must prepare to sharpen our weapons and immerse ourselves in all those new territories and races of monsters that await us. It would be a mistake to go into the unknown without a good batch of healing items, so the presentation now takes us to the merchant Kagero, responsible for the store where we can buy, sell and scan amiibo figures; we just don’t know right now what function those that are compatible will have (beyond the Palico, Magnamalo and Palamute officers). We will tell you about it in the Reviews.

Kagero’s trade will progressively have more objects once we increase the hunter rank. No changes in this regard: we can buy objects to take with us or to go directly to the trunk.

Choose your Canyne or your Felyne; you can pet the dog

The arrival of the Canynes are a joy beyond the anecdote of having a kind of faithful wolfdog in the game. Canyne, highly experienced four-legged canid animals, are at the disposal of Shirubei, an expert on buddys. Before starting a hunt we can hire one of them (or a Felyne) to accompany us on an expedition. They can also be trained at the Buddy Dojo. The more missions we complete, the more types of Canyne and Felyne we will unlock. That recruiting task also has a friendly and customizable slant. From the name of the animal to the preconfiguration of the postulate (level, equipped movements, type of equipment, the color of its skin…). Specifically, in the case of the Canyne they have two equipment slots, one main and one secondary. It is possible to hire as many as we want; all we need is … money. 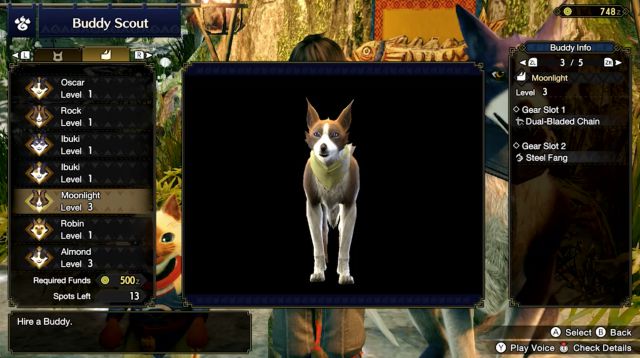 We don’t want to end our guided tour of Kamura without making a brief comment on the interface. It is common knowledge that inventory management, legibility of some sections and the ease of getting lost when you don’t have much experience with the series are recurring themes in the community. Here, at the moment, it is all very similar to World, which took great steps in the right direction, such as being able to activate auto-crafting. To give a basic example, which is still a quality of life detail, if we have a certain number of Herb, it will not be necessary to convert it manually into Potion; just activate it from the crafting list. Likewise, as we see in the image, at all times we will have an indicator in the upper right part, where the progress of our main or secondary task is indicated; small details that seek to let the Monster Hunter Rise player know what to do, without this meaning that they shake your hand and the experience becomes a guided tour. Is not that. 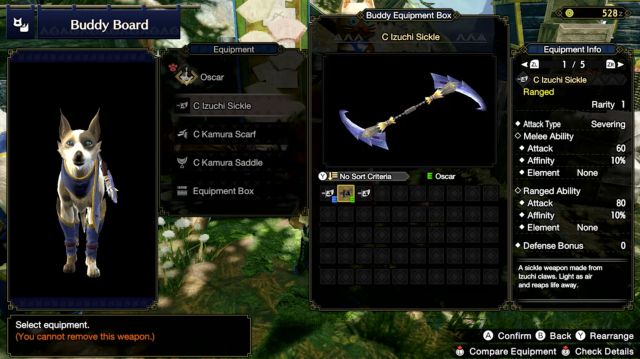 Another interesting detail is that it is no longer necessary to approach a character and start a conversation to know what he has to say to us, but from a distance we will see, as if it were a comic strip, a speech bubble surrounded by color. Monster Hunter Rise is a game with a lot of emphasis on color.

We really liked what we saw in Kamura. Both its structure and its mobility facilities, access … everything is very orderly, designed to facilitate navigation. Let’s move on to the missions, eligible from the Senri the Mailman post, with all the content of missions offline or online; also the eventual contents via DLC. In our case, the presentation took us on a mission to hunt a Khezu (two stars), an old acquaintance of Monster Hunter from the first generation, of the flying Wyvern race. 50 minutes available, reward and territory, Frost Islands, a place that we had not seen until now in the game. 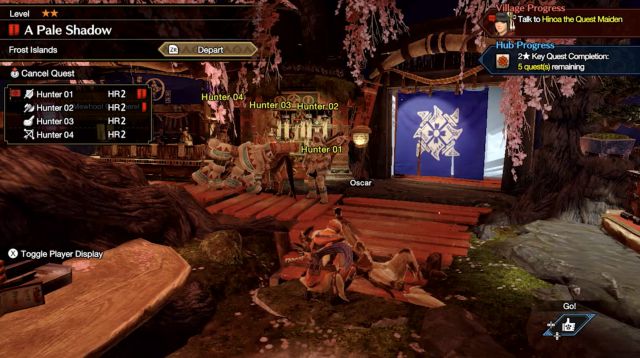 Notice to sailors: before starting the mission, in that half minute or so of waiting, we can start playing with our Canyne and strengthen ties. Yes, you can pet the dog. We can stroke it, shake it, or lay it down and tickle it. Once the mission is loaded and with a smile from ear to ear, we begin the mission.

We reached the Frost Islands, a place where giant dragons once rested. Snow, lots of snow, no load time at all. In the gameplay, a game with four hunters, we can see that this territory is quite large, with cliffs, swamps, sliding areas and verticality, a lot of verticality. We are surprised for the good by the effort that Capcom has put in incorporating hiding places, cabins, elevated places accessible only with great skill and through the use of the chordopter. It is designed for you to jump, explore, rotate the camera and discover. 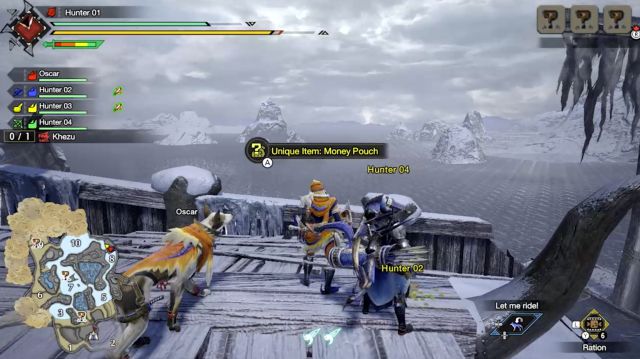 Even during a mission it is possible to collect materials and make secondary deliveries with their own rewards without interrupting your progress in the main mission. More jumps, very intelligent use of verticality to encourage movement not only on the surface, but also by jumping from roof to roof. You feel, in a way, a real ninja. We have never moved like this in a Monster Hunter. Once the monster is found, few new features: all together with the possibility of riding on other monsters such as a Tetranadon, regardless of size, and making attacks against our target. The use of the chordopter seems vital to do some techniques.

When this happens, when two large monsters face each other, something similar to what we saw in Monster Hunter World happens: the power of the unpredictable. Maybe that fight takes an epic turn; part of the ceiling may fall off and hit one of you; a trap set on the ground may paralyze one … or both! The behavior of the monsters, with amazing animations for a console like Nintendo Switch, is so wild that anything can happen. As you can guess in our words, the feeling of realism is total. In the gameplay we have seen, the hunter has converted the Khezu bounty into a full Khezu armor, which, as is also customary in the series, translates into additional passive abilities. In a second mission, we visit the Flooded Forest, a remake (not exactly the same) of the original forest from Monster Hunter Tri, with Jagras, Kelbi, Bishaten, Jyuratodus or Mizutsune, among others. The objective of this mission is none other than to kill a Bishaten. 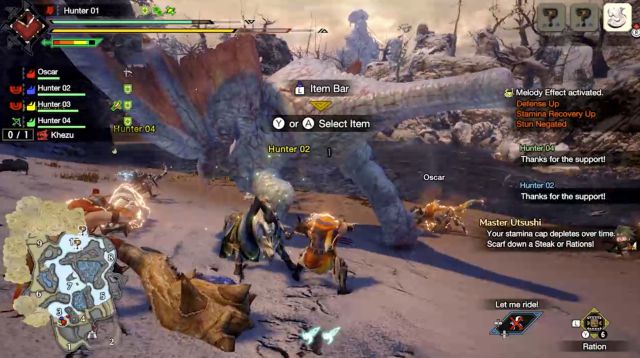 The animations of the monsters and characters have evolved enormously compared to Monster Hunter Generations Ultimate.

An improved training zone; put mechanics and skill to the test

Before finishing the presentation, Capcom shows us the training area, now with more options. For example, it is possible to configure it so that the Toadversary (a kind of giant puppet in the shape of a monster) fires projectiles at us or does specific actions that we want to train. At all times we see the damage on the screen and the combo in progress, thus facilitating progressively improving our mastery in every aspect of combat. It looks like the training mode of a lifelong fighting game, with indicators in the interface of the movement that we are using at that moment with the chosen weapon. It is possible to train in a group with other hunters, so synergy can also be practiced for as long as we consider until these joint techniques are perfectly blended. Details and more details. 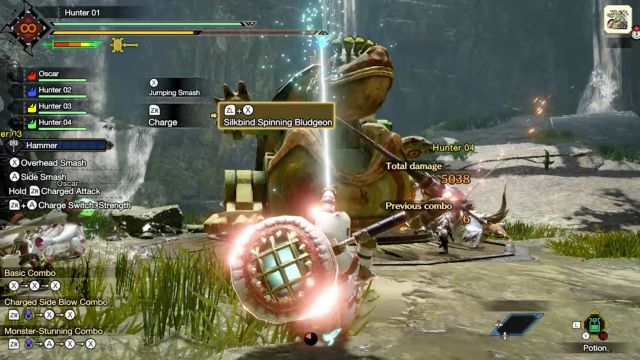 Monster Hunter Rise is a game concerned with making the experience as comfortable and agile as possible, and that is something that is guaranteeing us that the feeling of wear and tear that some perceived after hours in previous iterations of the saga here may disappear . Much remains to be seen from a video game that is huge in size and overwhelming in content, so take this preview as some nice impressions of what we have been allowed to see so far. It will be in our Reviews, in a few weeks, when we talk to you in depth about absolutely everything, the moment when we will reach clear conclusions and check whether or not we are facing one of the most promising video games of 2021. Its ambition remains beyond all doubt .

We have made these impressions after attending a digital presentation organized by Nintendo Spain. All images correspond to parts of the video provided for informational purposes.