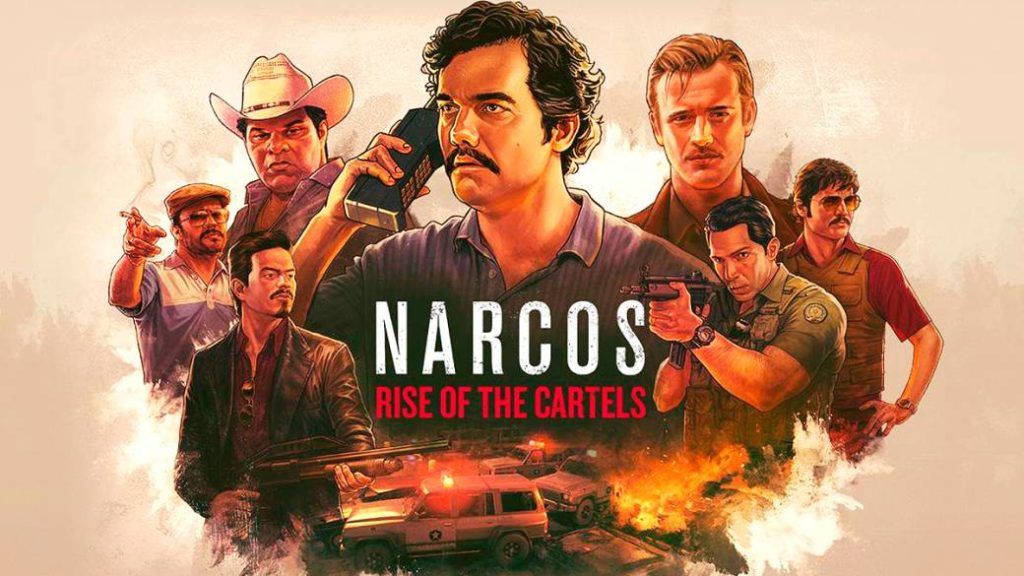 Tactical turn-based strategy game set in the Netflix series, which has as great value the presence of emblematic characters.

A little more than a decade ago, it was almost normal for large film productions to be accompanied by their corresponding video game, use and throw titles that went into oblivion, with rare exceptions, with more pain than glory. A trend that had fallen into disuse, but that Narcos: Rise of the Cartels has returned by misfortunes in the front row.

Kuju's game had all the ingredients to become a success: it is set in the popular Narcos series and is inspired by one of the best sagas of turn-based strategy, X-COM. But the result is far from approaching the Firaxis games. It is a want and I can not, full of good ideas, that for one reason or another has been spoiled.

Rise of the Cartels is Colombia dominated by the Medellin Cartel, with Pablo Escobar in full swing and with the DEA trying to abort its operations. The game, which begins with a fairly instructive tutorial, can be completed from both sides, the missions change slightly but it is a more cosmetic option than real, because the tactical options of both sides are identical. While, of course, the objectives are conflicting.

The player controls a team of five members who have different specializations: DEA agent, police, special forces, Search Block and demolitions. Each of them presents weaponry and personalized skills, which can be improved as experience in history is gained. There is a platoon leader for each side, Agent Murphy by the DEA, and the Cousin, by the Cartel, both are very powerful units whose death the mission fails. 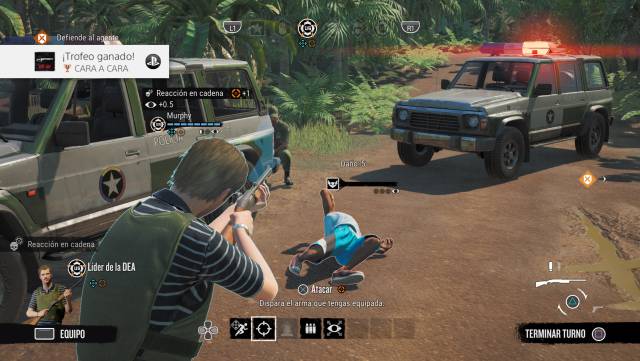 The game, lasting twenty hours per side, is structured by main and secondary missions. To unlock the first you have to pass a certain number of the second, which are chosen by the player. Upon completion they receive extra experience points that can be distributed at the discretion between the equipment and money to acquire new units. But there is no possibility to buy new weapons or improve existing ones, neither can you buy business or acquire technology, something that would have given greater strategic depth to the title. Of course, there are a variety of objectives: eliminate or protect a unit, place or collect evidence, dismantle laboratories, assault a building or a certain location … but in almost all of them you go through the same funnel: kill all the enemies on the map. 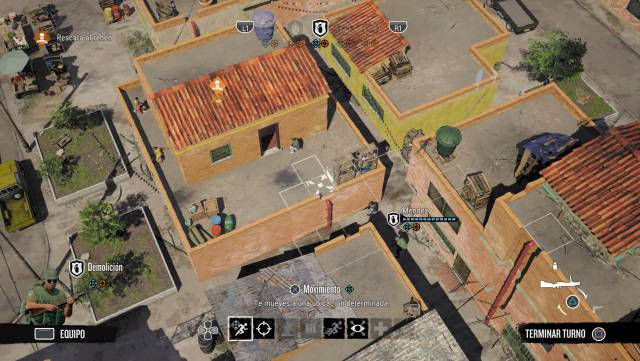 Narcos adopts the classic system of alternative movement by turns on a grid, but with the difference that only one unit can be moved at a time. This a priori seems innocuous weighs much of the tactical component of the game and unnecessarily extends the duration of the games. There is no possibility of making enveloping maneuvers or of covering fire, so most of the fighting is resolved in one-on-one duels.

In each turn the chosen unit has, unless it has specific improvements, a point of movement and another of action. If any of them is not used, an automatic response bar is filled and when an enemy unit enters its field of vision it can fire it. A 3D mode is activated in the shooter style in which the player must aim at the enemy and depending on the number of hits he loses units of life. It is something original, which clashes at the beginning with the strategic philosophy of the game, but that over time becomes interesting and serves to break a bit with the monotony of the missions. 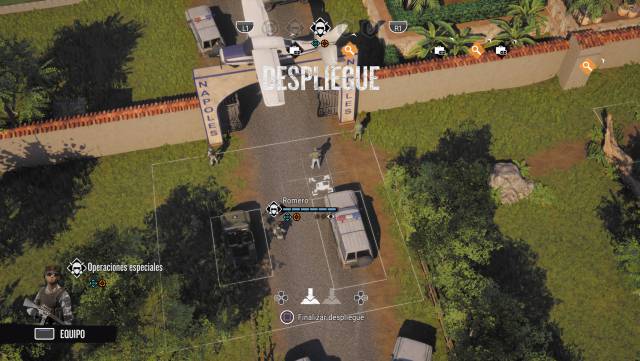 One of the best worked aspects of Narcos: Rise of the Cartels is the design of the maps, some of them are taken directly from the television series such as Hacienda Napoles or the streets of Medellín. Many combine with great success outdoor areas with interiors and even with different levels, something that in theory should benefit the units located high, but that really has no consequences. For example, a special forces soldier located in a tower is incapable of hitting a hitman with an M-16 located on the ground with an M-16, but it hits the first armed of a simple revolver.

There are a lot of objects scattered across the map that offer coverage, which use an identical system to the X-COM, but the elements are indestructible a simple wooden fence withstands impacts of all types of weapons, cars do not burn despite being thrown about them a dozen grenades … Another negative point of the design is the absence of civilians, something understandable in the missions in the middle of the jungle but that is inexplicable in the streets of Medellín, in the discos or in the ranches. 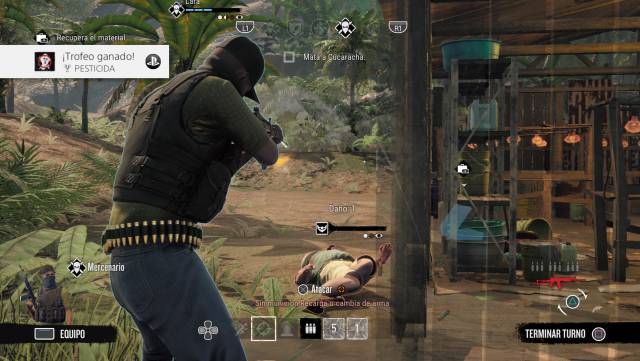 If the previous deficiencies were more or less bearable, when the AI ​​is reached the game completely falls apart. The behavior of the enemies, no matter whether they are from the DEA or the Cartel, is completely irrational. The same are thrown to bare chest without looking for coverage, that they remain in a corner while they are riddled with bullets or with grenades, element that passed the third level is devastating. So that many scenarios can be overcome without firing a single shot. Simply by using the grenade launcher, whose scope is miraculous, all enemies can be struck down one after the other, without them making the slightest movement to avoid it.

Only in those games in which new rivals enter the stage in a random way or in which they have to reach the target in a certain number of turns show something of interest. More for what the player puts on his side, than for the challenge of overcoming such obstacles.

In addition, it is a game that the more you move forward the easier it becomes because the skills that the squad members acquire are lethal at the highest levels. With a little patience and once the first turns of each scenario, which are usually the most complicated, have been overcome, it is a military walk. Placing the units in the correct way out is decisive for success, if not with letting the platoon leader be killed the mission restarts. In the absence of being able to save the game this is the best option when they kill a high level unit, because if a unit dies and the mission ends successfully, it is lost forever. 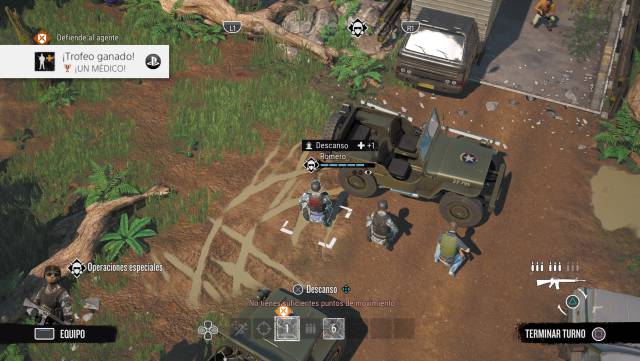 Narcos is made with the Unreal engine so its graphic section is more than correct within the limitations of the strategy genre: units, vehicles and stage elements are well designed. The different units are easily recognizable and the maps, although repetitive, are made with great pleasure. It is easy to change the perspective of the camera and zoom in and out to get more control over the battlefield. When the jump to the direct action scenes occurs, the thing changes and the 3D graphics seem to be taken out of a game from a decade ago.

From time to time a video is activated that collects key scenes from the series, but it is something merely anecdotal that also does not serve as the plot thread.

As for the sound, the voices are in English and some correspond to those of the real actors, but it is shocking to hear Colonel Carrillo and other Colombians speak in perfect English, when in the series they did it in Spanish. The texts of the menus are translated and the dialogues subtitled. The soundtrack picks up the mythical ‘Tuyo’ by Rodrigo Amarante that Pablo Escobar sang in the first chapter, but the BSO ends there, a shame. Sounds of weapons and some "bad" are the little that is heard in the game. No birdsong in the jungle or noise in the cities, just a sepulchral silence.

One of the few things that works perfectly is control, both in the movement of the characters, and in the options that can be executed in each turn. Everything is accessible, simple and quite intuitive, from the first games you have the feeling of dominating the game.

Narcos: Rise of the Cartels had the ingredients to be a good game, but an ominous AI and lack of depth have made it a commercial product to use and throw away. It has much more lead than silver, only recommended for the unconditional of the series who are also lovers of the strategy.

The game presents some interesting innovation in the genre, a level design that should match, but is weighed down by a movement system that only allows one unit to be controlled for each turn.

It could be but it hasn't been and after spending a few minutes with him it will be filed on the shelf to never play it again.