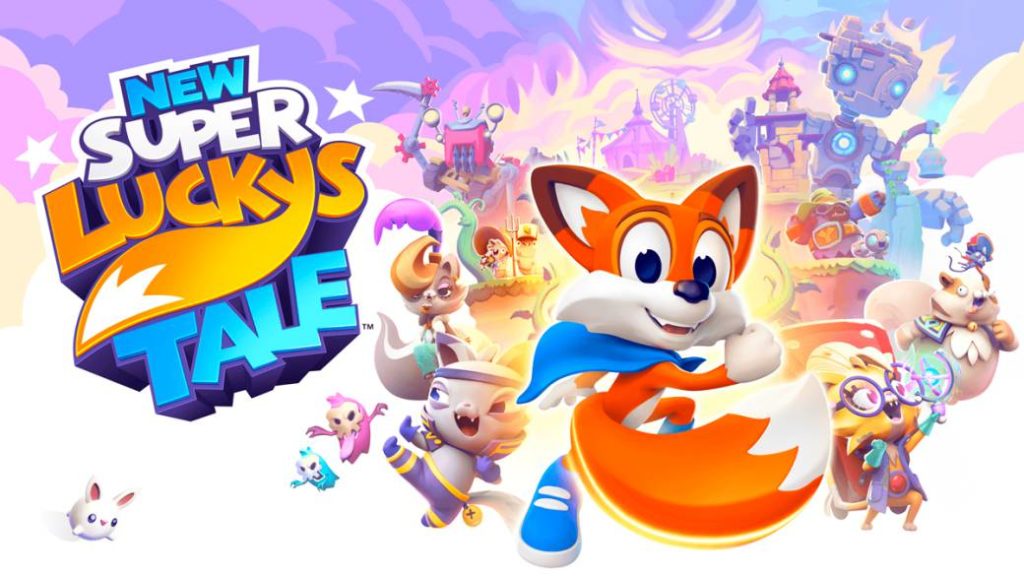 Lucky returns in a totally revamped 3D platformer adventure in a multiplatform format; We analyzed it on PC, PS4, Xbox One and Switch.

The story of Lucky’s Tale is as curious as it is busy. So much so, that the Playful development studio presented at the beginning of 2016 a first version of the game for PC specially designed for the Oculus Rift VR, as one of the first launch titles of the, at that time, a new virtual reality device . It would not be until the end of 2017 when the game would leave behind its exclusivity with Oculus to reach PC and Xbox One, thus adapting its game proposal to a more traditional format. However, at the end of 2019 Playful surprised with a new version of its colorful title for Nintendo Switch as part of a series of ports shared between Microsoft and Nintendo, now baptized as New Super Lucky’s Tale. And the addition “New”, far from looking like a simple marketing move, reveals a deep revision of the original work, completing an adventure that can be considered almost a completely new game. Now, after its celebrated debut on Nintendo Switch, New Super Lucky’s Tale reaches the rest of current platforms, that is, PC, PS4 and Xbox One. Let’s see how this profound facelift has sat down to the adventure of Lucky and company in our Reviews.

Behind the lost pages of the Tome of Ages

Having reviewed the peculiar trajectory of such a colorful platform adventure, let’s see what it has to offer fans of a genre that lately have received more than interesting titles, from the remastering of classics like Crash Bandicoot or Spyro to new franchises like Yooka-Laylee or To Hat in Time, to name just a few examples. In this case, New Super Lucky’s Tale maintains a good part of the original structure of the base game, but as we say and due to the complete redesign of a good part of its main features, this version can be considered almost as a totally new platform, maintaining its Children’s character, a title for all ages that will be especially attractive for the youngest members of the household, both for its audiovisual presentation and for its accessibility to its controls. However, let’s learn more about its context before delving into its novelties and game proposals.

At the plot level, New Super Lucky’s Tale maintains its essence intact and presents us with a simple story with the figure of the classic villain and a young hero who must restore peace to his home, while rescuing his loved ones. The story is presented at the beginning of the adventure through colorful minimally animated illustrations, all through an effective soundtrack with well-interpreted English voices with Spanish subtitles. Broadly speaking, the evil sorcerer Jinx and his peculiar family known as the Minine Litter, have defeated the guardians, of which Lucky and his family are part, thus sent to other worlds. Luckily, Lucky has the Tome of Ages, a book that links the different worlds through its pages, through which he can bring the rest of the guardians back. The problem is that the pages have been torn out by Jinx and it will be the task of our friendly protagonist to recover them through a journey through different and varied worlds.

This is how a platform starts that follows to the letter the main characteristics of the great classics of the genre, such as exploring or collecting elements throughout their worlds, as well as defeating the shift bosses or solving various types of puzzles and challenges. Thus, we quickly embark on our journey with several objectives to fulfill, such as the collection of pages from the famous magic book as the main motive along with other extras such as hundreds of coins distributed throughout the worlds (some visible and others more hidden and even invisible) , diamonds that will provide extra coins, secondary pages or the letters that make up the name LUCKY, among other elements. Actually, the search is focused on the pages of the book, since as we accumulate a certain number, the doors of the different bosses will open that, once defeated, will allow us to travel to the next world, up to a total of six. 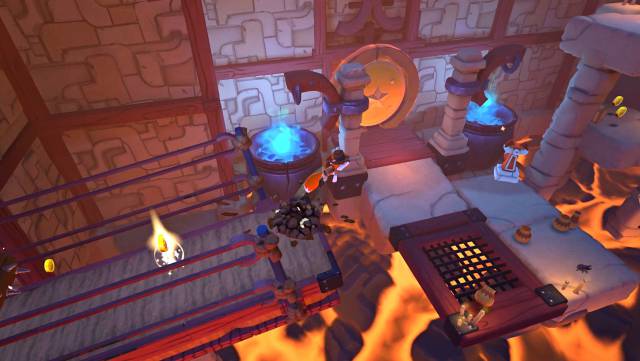 The rest of collectibles are only used to get one hundred percent of each level, in addition to acquiring pieces of clothing for Lucky in exchange for coins in the different stores of the worlds or solving simple puzzles. A classic platforming development reminiscent of games like Banjo-Kazooie and works like a charm to keep pace and interest. At the level of playability, it is also committed to simplicity as a direct route to fun; and it is that Lucky moves with enough ease, offering the player the typical double jump, the possibility of sliding momentarily on hard surfaces or digging underground on sand or grass surfaces and the tail blow to knock out enemies, very often in the form of non-threatening creatures that will not put up much resistance. The combination of these elements guarantees a pleasant and entertaining gameplay, with a good level of precision in the jumps and the general handling of the little fox.

And it is that beyond the three-dimensional levels with total freedom of movement, New Super Lucky’s Tale also offers lateral displacement levels that provide variety to its development. Levels as a challenge in which autorunner mechanics are combined with more free ones in the purest style of 2D platforms; in this sense, his intention to get away from monotony is appreciated. But, what news does this new version dubbed “New” provide compared to the original video game? In reality there are many changes, from the visual aspect of the game to the design of the levels, as well as other key aspects such as the possibility of moving the camera freely; only in the main levels in 3D, not in the 2D ones, obviously. And it is that in the original title it was not possible to rotate the camera around the protagonist beyond modifying the perspective minimally, and in this case it is greatly appreciated, although it entails a small setback. 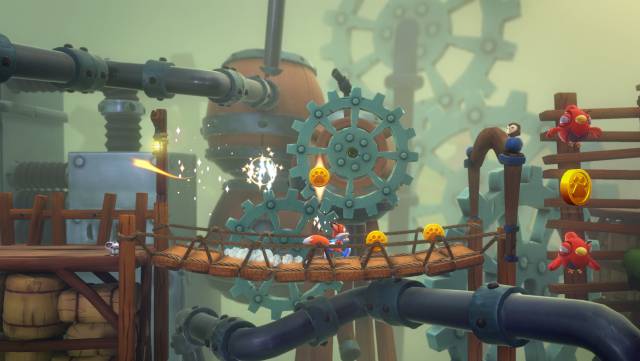 You can see that the base game was not designed for this functionality, so by moving the camera as we please we can discover many secrets of the levels, since it literally gets into places where it shouldn’t be when rotating on Lucky, ruining the odd surprise; the same happens with the occasional final boss, revealing attack patterns or other elements that were kept “hidden” in the original thanks to a much more static camera. Where an abysmal leap is noticeable is in its staging, now much brighter, more colorful and with many more details on screen compared to the original delivery. And it is that the settings have been enriched with new elements, objects, new textures and a much more attractive lighting treatment; all supported by a deep level redesign that gives it a look more like a remake than a simple revision.

But not everything is ideal, far from it. Due to the graphic jump, the game suffers from not a few drops in framerate, sometimes annoying and that can ruin a nail jump or a fight to the limit. A somewhat disconcerting situation that should not occur if we take into account that the Playful video game is not graphically pointer, even in hardware with plenty of power to move a title of this nature. Another aspect that could be improved is excessively long loading screens, both when accessing new levels, secret areas or worlds and when returning to the game after losing a life. 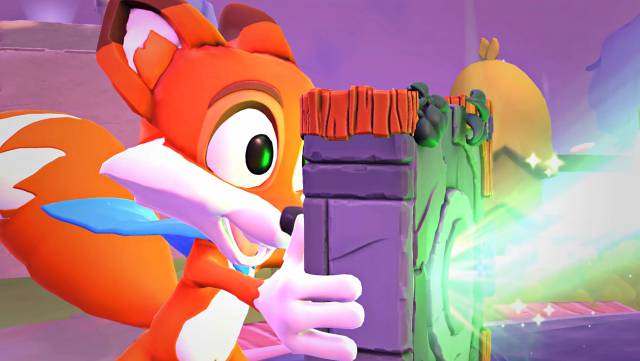 New Super Lucky’s Tale comes as a breath of fresh air to a genre that is recovering its best form with several quality releases in recent times and that aims to fill that space especially suitable for the smallest of the house; However, older fans of old school platforms will find in its proposal an entertaining and fun adventure that is easy to play, thanks in part to a practically testimonial level of difficulty. The exploration and the eagerness to complete one hundred percent of all the levels is one of his best assets. In short, a return to the classic formula of three-dimensional platforms that, although not very ambitious, does what it promises; Too bad those little pitfalls that prevent Playful’s game from shining more brightly against the competition. 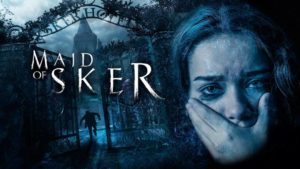 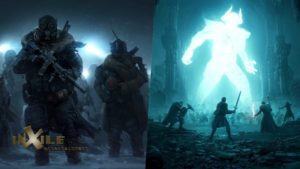