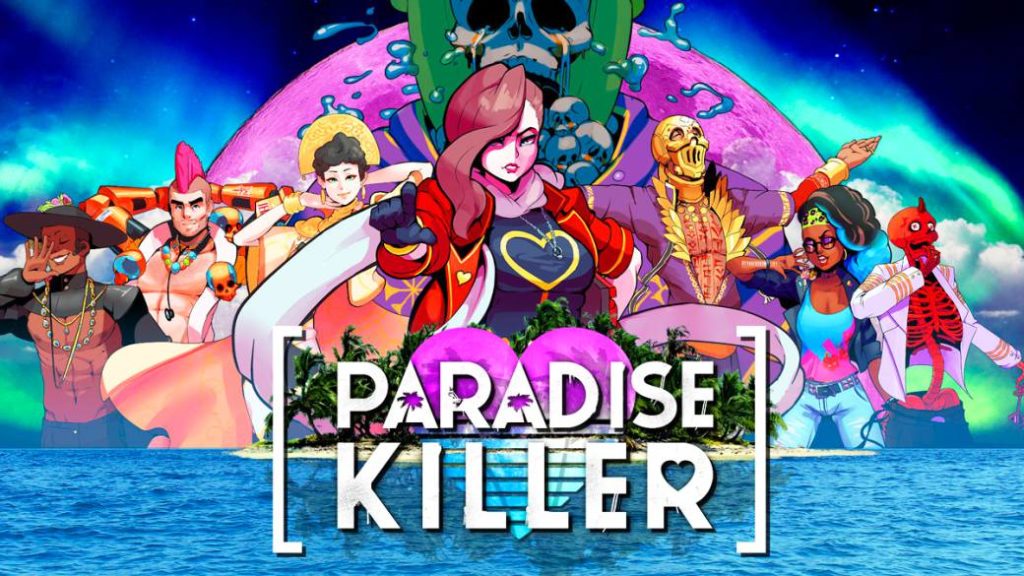 A detective adventure with vaporwave aesthetics that claims the freedom of the player.

The design of a detective game has a great stumbling block: proposing a complex mystery to the player and adapting it to the user’s ability to solve. In other genres, the fantasy of being able to play a hero of colossal strength is created through the buttons and combos that we can perform with the controls. However, how to make a detective from a player who does not possess the intellectual gifts of Sherlock Holmes? Of course there are prodigious minds in real life, but the average user is rarely that (anti) hero versed in solving near-perfect crimes. All in all, sagas like Phoenix Wright have managed to overcome the pitfall of creating an enigma accessible enough for the player, without relegating their participation to a passive role. Paradise Killer, by Kaizen Game Works and Fellow Traveler, is the example of everything we could want from a detective title: an investigative adventure for PC (Windows and iOS) and Nintendo Switch in which freedom of action invites the player to be daring with his inquiries, without him being overprotected.

A common sin that detective titles commit is to lead the player by the hand and guide him excessively during all the investigation and resolution phases. If we do not collect the necessary clues, we cannot progress in the story, and sometimes we do not need to make our own deduction, since it is broken into the correct dialogue option. Instead, Paradise Killer allows us to be the ones to investigate to our liking, in the order we want, and for us to analyze the information and make our own hypotheses. There is a real truth about the crime on Paradise Island, but how we get there will depend on ourselves.

Paradise Killer has two very different phases: the investigation and the trial. From the first moment, we can announce to the Judge that we are prepared to unmask the murderer and uncover the truth and face the consequences of our detective work. On the other hand, our accusations will only be taken into consideration if we show sufficient evidence, which we must also thread correctly. Otherwise, the official version of events is the one that will prevail. Even with the option of going to trial with empty pockets, we will always be curious to know the truth, and discover even the smallest detail that can disrupt our conjectures and prejudices. 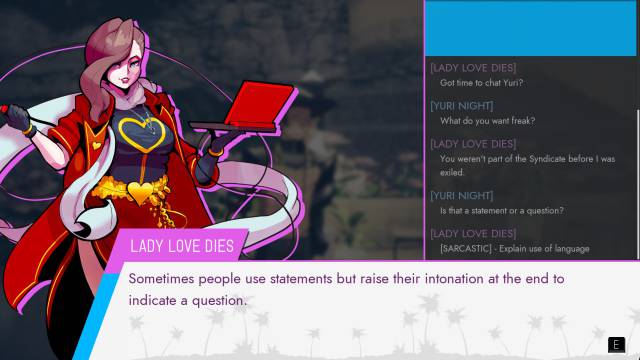 “When love dies, only the facts remain”

We are in Paradise, an idyllic holiday island that evokes the most idealized postcards of the cities on the beachfront. This place is a sweet trap, created to attract humans who will be offered in sacrifice to the gods of a bizarre pantheon. Behind this architect is the Syndicate, a group of immortal beings who wish to bring back their divinities using human blood. In this dimension, a cycle of creation and destruction occurs, in which one island is destroyed to create the next and thus continue with the cruel cosmic order. However, a crime has interrupted the process: before moving to Perfect 25 island, the entire council that governs the island has been brutally murdered. Only one woman can unravel the truth and bring peace to paradise: Lady Love Dies.

Our main detective embodies some of the clichés of the genre noir, covered with the peculiar aesthetics of Paradise Killer, which we will explore later. Lady Love Dies is a sensual, sassy, ​​confident, and passionate about her work intelligent woman; It is not for nothing that she is nicknamed “the research geek”. With a cloudy past that led to her exile, she is brought back to Paradise to solve the case “The crime that ends all crimes”, as well as the enigmas linked to it. 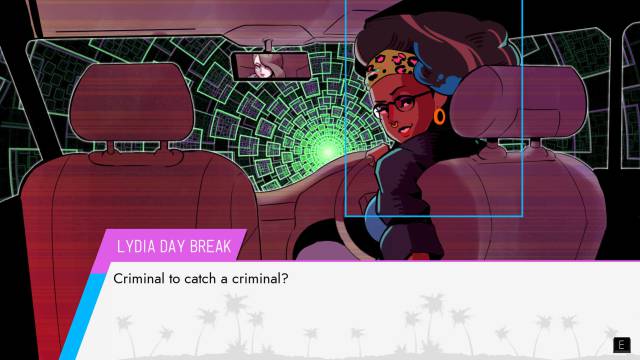 Lady Love Dies will launch into the exploration of Paradise, accompanied by her inseparable Starlight laptop, which collects and classifies all the information we discover, in addition to performing very useful tasks such as decrypting messages or analyzing evidence. From a first-person perspective, we will interrogate suspects, chat with them to gain their trust, investigate scenarios, and explore locations for any thread that leads to the truth. There is no guide on where to start or where to go; We will decide ourselves, based on the data we collect, what is the next step we will take and when we will be satisfied with the known facts in order to develop a hypothesis and demonstrate it at trial. Likewise, during the final phase, it will be up to us to identify the accused and present the evidence against them in a logical order.

“So are the facts, but are they the truth?”

“So are the facts, but are they the truth?” it is the premise on which the curiosity of Lady Love Dies and her impulse to unravel the smallest secret is sustained. This eagerness is transmitted to the player, who will be encouraged to be daring in their exploration and seek routes beyond the established path. Climbing the mountains, investigating the roofs of buildings … In every corner we can find a surprise or that leads us to the truth. We will also come across simple puzzles that require visual acuity and minimal reading between the lines. 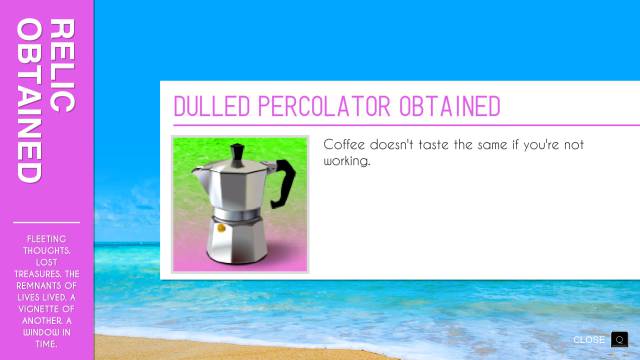 Also, Paradise Killer dismantles certain conventions with the collectibles, since some of them are important for the progress of the game. Blood crystals, currency of the island, will be necessary to acquire certain items that will make our investigation more bearable. Even the most superficial investments, such as the purchase of soft drinks or the service of hydromassage in the feet will suppose a reward more than grateful. It is also worth mentioning that we will find memories, a type of collectible whose only function is to expand the lore about Paradise Killer, which is very deep, complex and will allow us to have a greater perspective of the story. At first, the amount of information we can get from the crime and from Paradise may overwhelm us, but little by little we will become familiar with its history and connect the clues with our hypothesis.

If we decide to be thorough and complete, the adventure of Lady Love Dies will take us 12-15 hours of play. We can take advantage of the fast travel in the phone booths where we save the game, but we will still decide to go on foot in case we have left a loose end. Each discovery takes us one step further, which, in turn, brings us closer and closer to the murderer. In addition, the peculiar imaginary of Paradise Killer will invite us to delight ourselves in a title that, with its eyes set on Danganronpa and Phoenix Wright, has managed to find its own personality. Disruptive gods, a deep and imaginative universe, a scathing critique of capitalism, elements inherited from noir and a vaporwave aesthetic that celebrates eccentricity as an ideal of beauty present both on the stage and in characters that ooze charisma. The soundtrack, composed by Barry “Epoch” Topping, mixes funk and synthetic pop, with very varied and catchy themes that we will find in radio towers, with messages about love, euphoria and melancholy, all with a certain hint of irony. 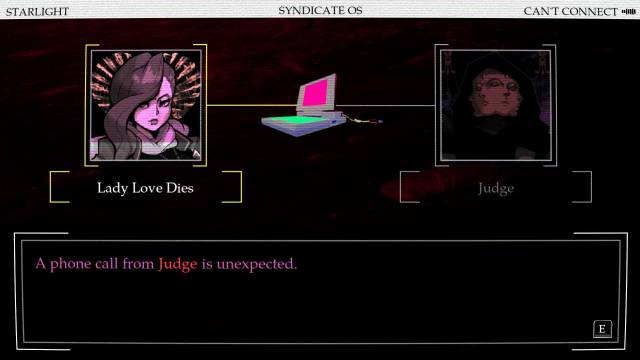 In terms of accessibility, the customization options are a delight, although a setting for the camera is missing, since the suddenness of its movements can make certain players dizzy. Fortunately, it is possible to get used to it in a bit of immersing yourself in the game. On the other hand, we regret that there is no localization in Spanish for an original, sinister and beautiful detective title whose mechanics are an example for the genre.

When we solve the crime of Paradise, we will have the satisfaction of a job well done, although we will not be able to remove some concern about whether we have done the right thing, and that is that at no time will Paradise Killer judge us for our investigation; there are no happy or sad endings, only the peace of our conscience. And, as Lady Love Dies remembers, solving a case does not mean saving the world. 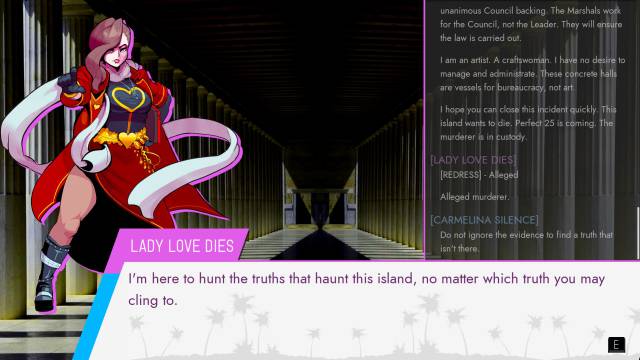 This game has been analyzed in its version for Windows PC.

Paradise Killer takes note of Phoenix Wright and Danganronpa to offer us everything we can wish for from a detective adventure. A system that explores that claims the freedom of the player and encourages him to be daring, go off the beaten track and investigate the most unexpected corners. Without taking us by the hand, we will be the ones who explore to our liking and who will make our own hypothesis to defend it in the trial phase. With a vaporwave aesthetic that celebrates eccentric beauty, we will immerse ourselves in a deep story full of personality, where there is only one truth, but multiple ways to find it.