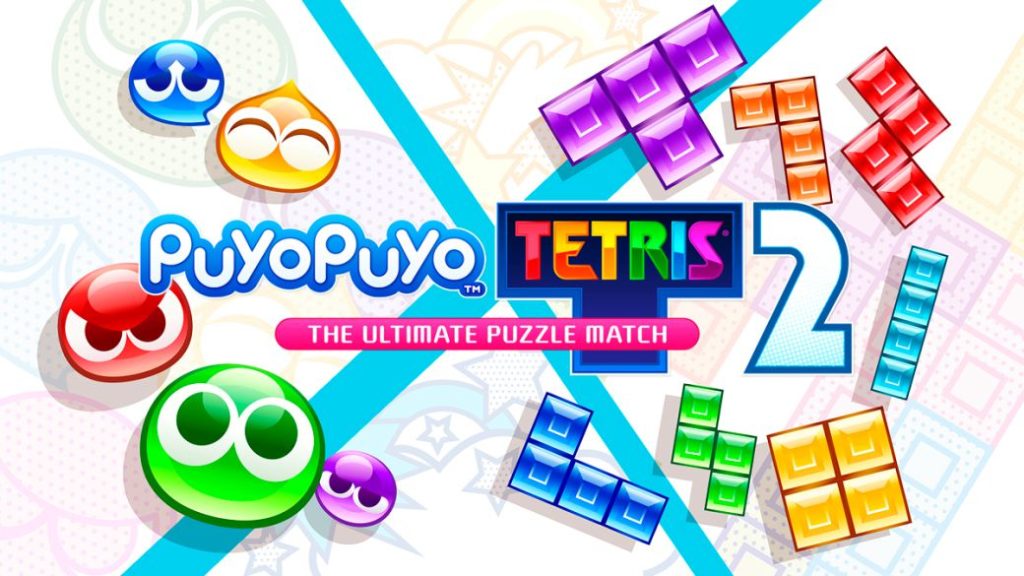 We analyze the sequel to the crossover that brings both puzzle sagas together again in a title with a wide variety of game modes and content.

Many are the franchises that have stood out in the genre of puzzle games but, without a doubt, among all of them the two series that make up the title that we are going to analyze today stand out: Puyo Puyo and Tetris. The latter does not need much presentation as it is one of the most played titles for more than thirty years, especially its conversions for the Game Boy, by far one of the best-selling versions of the game, and NES, including different conversions, including some such as Nintendo’s own, that of studios like BPS or the infamous version of Tengen, better known for all the legal problems that were behind than for the quality of the conversion itself, in addition to other titles for different platforms that have been appearing to throughout the different generations.

Puyo Puyo, meanwhile, has been a successful saga especially in Japanese territory and with small glimpses towards the western market. Originally developed by Compile Co., the series gained popularity through the appearance of different games in the systems of the time, being striking its style of play of popping puyos, the pieces of the game, through accumulating chains with which to get a better score or defeat the opponents controlled by the machine, in this case executing special techniques that will accumulate junk pieces and hinder progression in the game. In 1998 the series was acquired by Sega, who has developed the subsequent games of the franchise until today, when the sequel to the crossover of both sagas arrives.

When entering the game’s start menu, apart from the option to start playing by entering the main menu, quick game options are included to start playing in each of the two types of game in this title. The options included in the game are divided into different game modes, the adventure mode being especially striking, in which the characters of both franchises will join forces to avoid the fusion of the worlds of Puyo Puyo and Tetris orchestrated by a mysterious character. The development in this mode is divided into different phases, which in turn make up several chapters, in which the development is carried out combining moments of novel visual style together with confrontations in which both styles of play will alternate depending on the controlled character and also the game mode. Each phase includes, in turn, additional challenges, such as finishing with minimum time or score, marked with stars that will unlock additional rewards in the game when completing them, in addition to accumulating points at the end of the game which will be obtained based on performance during the same with a post-combat rating screen. Extra stages can also be unlocked that will offer special confrontations.

Next are the individual and versus game modes, including different game variants to play alone against the CPU or with other players in local mode respectively. In them the player will be able to choose between the different selectable characters, with a total of more than 20 available from the beginning plus 6 additional unlockable ones as they progress through the game, with different skills and game specialty between Tetris and Puyo Puyo. In total there are seven different game modes included, these being Versus, Feats Battle, Big Bang, Alternate, Fusion, and Challenge, including some of them with two different modes between Battle, which allows the selection of the AI ​​rivals to do. Front, and Resistance, in which the player will have to face the different characters consecutively to defeat as many as possible before being defeated. Denote that the Feats Battle and Challenge game modes lack this option. 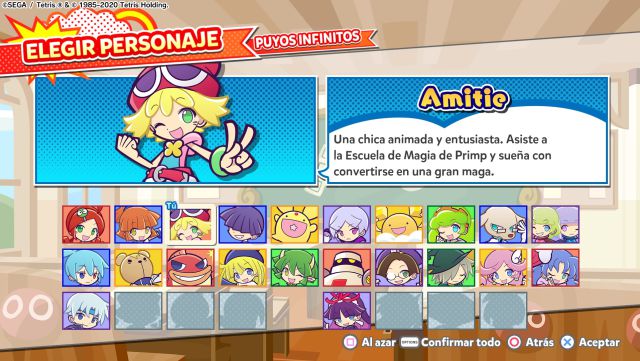 In the Battle of Feats mode, it offers confrontations between groups of three characters to overcome, using their skills, the confrontations against the rivals, both having a life bar that will decrease with each chain carried out until it is at zero to end the encounter. The group can be customized by selecting the members of the group, affecting its parameters and therefore its effectiveness in combat. Each character will have, in turn, a feat, or special ability, that can be executed by spending magic points during the confrontation, ranging from life recovery skills such as increasing attack power or even facilitating the formation of pieces to get chains more easily. Denote that the characters will be able to increase their level at the same time as that of the skills, even unlocking new ones. Finally, each group can be equipped with cards of different types that will also affect the group’s parameters and that, in certain cases, will have a special effect when equipped.

On the other hand, the Alternate mode, as its name suggests, allows you to play a game in which the style of play is selected randomly before starting to play and that after the end of a countdown it will change with the other mode of I play in such a way that the chains and lines are combined to throw junk pieces at the rival and defeat him. The Party mode faces both players competing to obtain the highest score before the end of the time limit, having as an aid series of objects that will be used when getting lines or chains on them and activating abilities that will help the player or hinder progress of the rival. For its part, the Fusion mode combines both styles of play in such a way that from time to time both puyo puyos and tetriminos will fall, offering a peculiar playability in its execution by having to combine chains with lines. The Big Bang mode, for its part, consists of achieving the highest number of lines and chains in each style of play before the end of the countdown, after which the loser will see the life bar they have reduced, continuing the push until one of the two is defeated. Finally, Versus mode offers the option to play both styles of play classically. 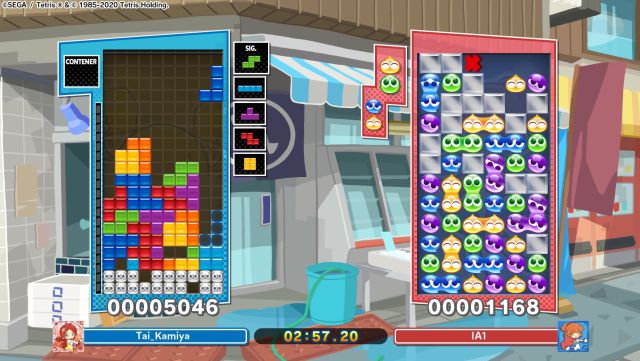 Besides, there is the Challenge mode, which includes six different game modes, three for each style, with which to play alone to test the player’s skills. In the Infinite Fever mode, predetermined layouts of puyos will be presented that will have to be cleared correctly to increase the time limit established and in turn the score obtained. The Infinite Puyos mode is, in practice, a survival mode in which the player must perform chains of puyos in the set time to increase the score and the challenge level. Both in this and in the Mini-Handles mode, which is practically the same mode but using smaller variants of pieces, you can configure both the handicap and the time limit and can even eliminate it to play infinitely, in addition to being able to configure other settings such as the background music, the style of the pieces among various designs or effects.

On the other hand, the Sprint, Marathon and Ultra game modes remain. The first of them consists of achieving forty lines in the shortest possible time to be able to surpass the established mark while the second variant, although similar in practice, is more complex, having in this case to clear a total of one hundred and fifty lines to establish in this case a maximum score. However, the difficulty lies in the fact that the level will increase each time, which will affect the falling speed of the pieces and thus complicate their placement. Finally, the last mode is to get the highest possible score in a time limit of three minutes. 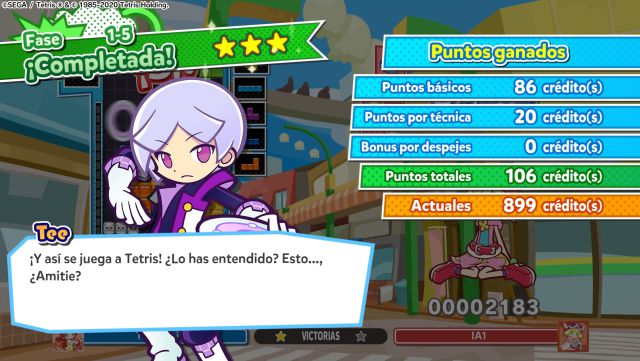 The online multiplayer aspect offers as an incentive the competitive mode of Puzzle League, in which players can face each other to get points and improve their position in the ranking. On the other hand, there are the Free Play modes, being able to play without changes in the ranking, and the Boss Assault mode, in which players team up to try to defeat a powerful character. Additionally, options are offered to view game videos and also be able to enter rooms created by friends.

Another of the selectable modes in the game’s main menu is Lessons. This mode offers some notions of both play styles and modes such as Fusion and Battle of Feats from the most basic to the most advanced aspects to learn to master them, including, in the case of Puyo Puyo and Tetris lessons, a total of one hundred problems in which to put into practice some of the notions learned in this mode. 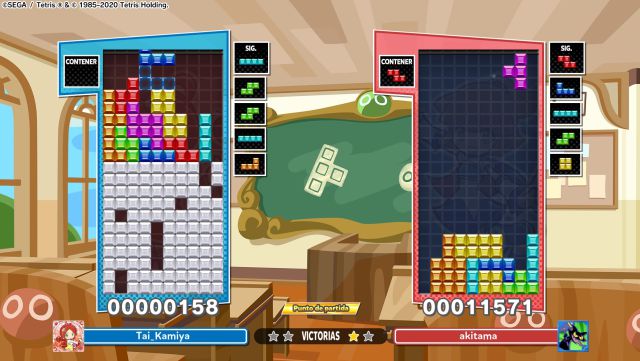 Finally, there is the Options and Data mode, in which, apart from accessing the technical configuration of the game, there are other additional aspects such as editing the player profile for online mode, configuring the group of characters for feat battles, view local saved game replays, game mode statistics and the store. This last section offers the option to buy extra objects for the game with the points obtained in the different game modes. Contents include new skins for tiles for each playstyle, unlocking extra character voice options, or acquiring a wide variety of player avatars.

In terms of playability, this title undoubtedly offers a large number of hours of play through its different solo or multiplayer game modes. Little can be said about the gameplay offered by Tetris at this point since it is a game that has practically offered the classic game formula so many times seen and that despite everything remains addictive despite the years it has on its back . The same can be said of Puyo Puyo, that despite not being a well-known franchise in these parts, its style of play presents an interesting challenge to place the striking jelly bubbles strategically to later achieve several chains of destruction of consecutively. To this must be added the different game modes that provide a point of variety to accompany the classic gameplay of both sagas, some of them appeared in the previous game, and that make up a section that borders on a remarkable level. 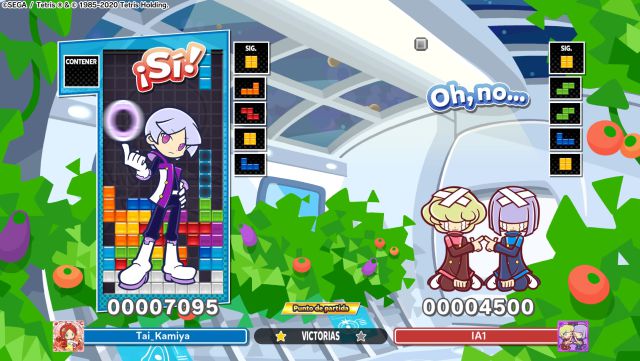 In terms of graphics, the game retains the graphic style of its predecessor, offering colorful menus along with a sober interface that is completed with the striking character designs that the game boasts, with a markedly anime style. It does not stand out in excess in this section but, on the contrary, it is not necessary to demand much in this regard, comfortably complying with what it offers. Denote that this sequel arrives fully translated into Spanish, unlike the previous title that was only localized in English.

Finally, the sound section is another of the aspects that stand out the most in the game. It is especially striking that this time, apart from including dubbing in the Anglo-Saxon language, the possibility of selecting voices in Japanese is included. On the other hand, there is the selection of musical tracks, configurable in certain game modes and that include compositions from both franchises, including some remixed versions of classic themes such as the classic Technotris or Type A, the classic Game Boy Tetris melody, along with other new themes for the occasion.

Puyo Puyo Tetris 2 results in a title that stands out both for the classic gameplay of both franchises and for the different game modes, large in number and varied, and that translates into hours of fun both playing alone and in multiplayer. To this add aspects such as the Spanish translation, something that was missing in the previous title, and the option of voices in Japanese along with a selection of varied tracks, some remixes of classic themes, which will enliven the games. 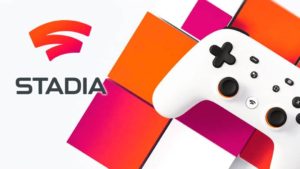