You are here: Home / Review / Shady Part Of Me: Reviews; Light and shadow puzzles 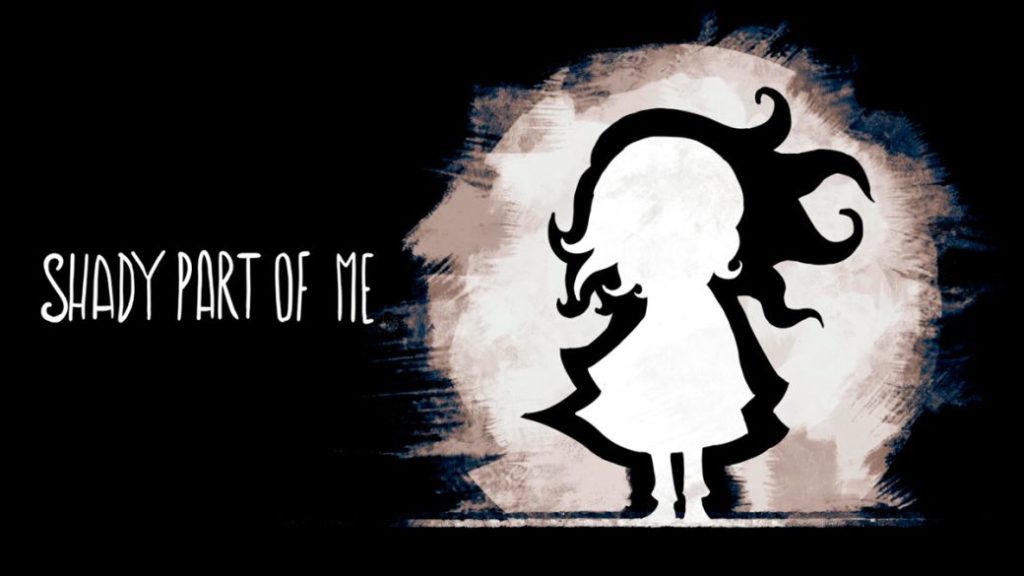 We analyze Shady Part Of Me, an attractive combination of a platform and puzzle game with an excellent dream setting and highly original light and shadow mechanics.

Shady Part Of Me is the title with which the small independent French studio based in Paris Douze Dixièmes, founded in 2017 by only 7 members, makes their debut. For their debut feature they have opted for a more than interesting hybrid of platforms and puzzles, with a dreamlike setting and a very attractive development. The combination of its original proposal, its careful setting, peculiar narrative and great artistic direction has enchanted us and offers us a very enjoyable and attractive title. The video game at hand uses a fresh combination of shadows and lights, and 2d platforms combined with three-dimensional preview to offer us a development that mixes jumps and light puzzles. For the occasion we will have two protagonists, who we will control independently and whose management we can alternate at any time of the game. Together they must overcome a series of dreamlike and surreal levels whose staging and excellent artistic direction have conquered us.

A story of overcoming

As we have already commented, in the title we will handle two protagonists: a girl and her shadow. Together they will have to go through a series of chapters, which although at certain moments it seems that they take place in a sort of internment center or hospital, they will always display a surreal and dreamlike setting that means that at first we do not really know where we are or what is happening exactly. As we play, we will discover what happens, as we help our protagonists to overcome their fears and the barriers that make them complex. Shady Part of Me tells a story of overcoming and fighting against our own limits, and it does so in a way that we have found excellent. 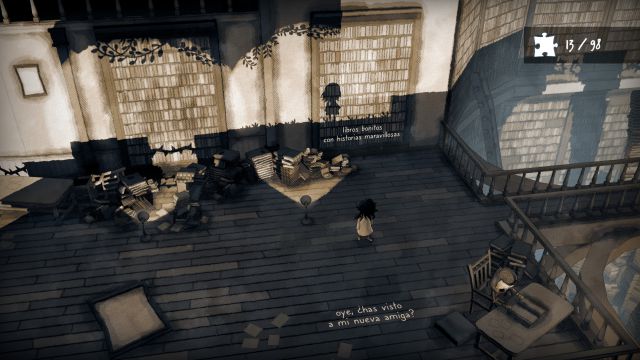 The narrative uses a series of pop-up messages on the screen and voices that appear as we progress, so that the story is told in a very peculiar way. We have loved the effect that this achieves, and the immersion point it brings to the video game. All this would not work as well without the superb work of localization to our language carried out, whose quality is not usual to find in a small independent title like this, even with a powerful editor behind it like Focus Interactive. All the texts on the screen are translated and perfectly integrated into the title, something vital given its importance in the narrative. The Spanish dubbing work of each and every one of the voices is exceptional, with fantastic performances that marry wonderfully with what they are trying to convey. Chapó for study and distributor for a job of localization to our market from which many companies should learn. 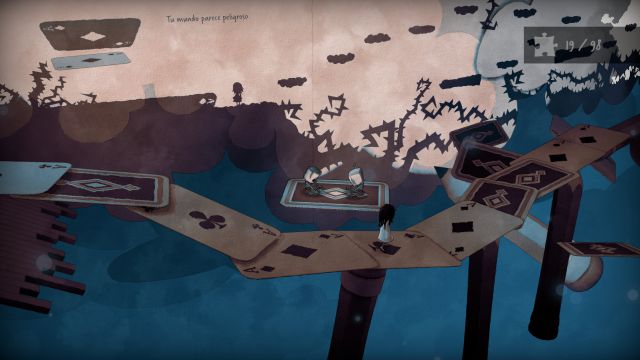 Solve puzzles on two planes at the same time

In the playable section, we have, as already mentioned, a mix of platforms with puzzles. The original touch of the game comes from the possibility of handling two characters, and the game between lights and leftovers that both offer us. To curl the curl, the protagonist moves in a three-dimensional environment, and due to her phobia of light, she will only be able to move through the shadowed areas. The chuquilla also does not have the ability to jump. Its shadow moves in a two-dimensional plane located at the back of the stage, with the limitation that it can only move through illuminated areas, and it can jump. The key to moving forward will be cooperation between the two, since they must join forces to open the way for each other, each from its own plane of influence. We must bear in mind that the actions of one affect that of the other, and for example we can project objects from the three-dimensional environment to create platforms or paths that the shadow can overcome. And this in turn can activate mechanisms that allow your flesh and blood alter ego to advance. 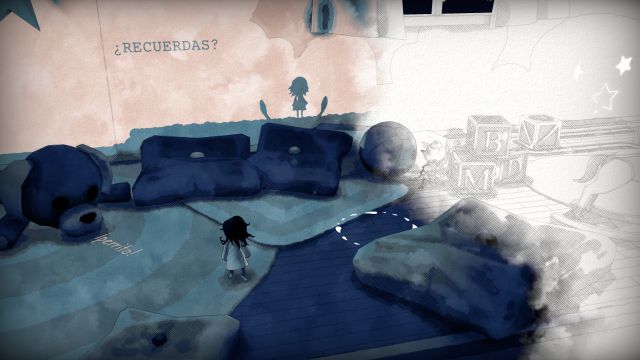 To do this, they must solve puzzles with switches, pressure sensors or pushing objects, so that they must create areas of shadow or light in the path of the other character so that he can advance. As usual in these types of games, as we progress, new mechanics will be added to the mix. The difficulty of the puzzles is not excessively high, generally we will not get stuck and their resolution is satisfactory and logical. To complicate things a bit, we will find a kind of optional collectibles in the form of origami birds, which are somewhat more complex to obtain and extend the useful life of the game in case we feel like trying to get them. It took us around 5 hours to complete the game. As an aid to adults, we will have the option to rewind time at any time if we have entangled the resolution of a puzzle to a point of no return, or simply if we want to focus it from another perspective again from the beginning. We miss that the studio did not implement a cooperative mode where each of the characters will be managed by two players. 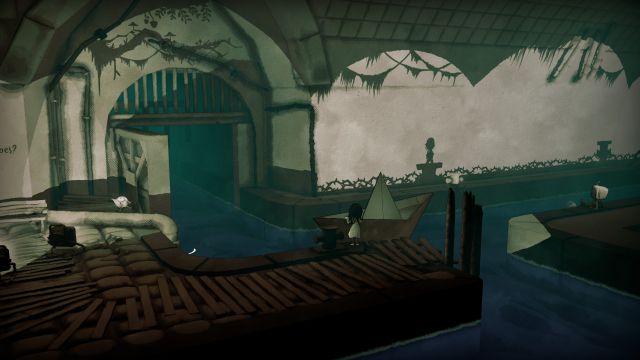 A dreamlike and surreal world

On a visual level, we have loved the artistic direction used by the game, which goes hand in hand with its dreamlike and surreal proposal. The graphics in Shady Part of Me are an outpouring of imagination that uses the most successful watercolor tones to capture puzzling environments that are always surprising and varied. The fact of alternating between a three-dimensional development with freedom and the shadow areas, two-dimensional but sometimes superimposed on non-continuous planes at the back of the stage, make the original visual finish of the title look even more if possible. We are facing one of those graphic works that, although they do not stand out for their raw technical power, they do so for their originality and good work on screen. In the sound section, we once again highlight the enormous work of localization to our language, with a dubbing into Spanish of all the voices of the game really impeccable and that marries wonderfully with the characters. An unusual task in this type of production that on this occasion must be applauded and vindicated as an example to follow. The soundtrack wonderfully accompanies the development of the adventure, leaving evocative moments of great beauty. 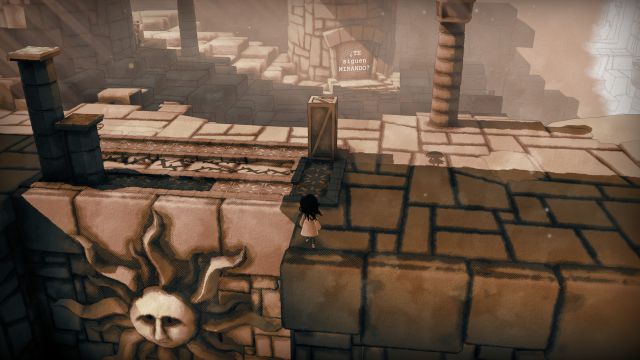 Shady Part Of Me is a great game that mixes platforms with puzzles. It stands out for allowing us to control a girl and her shadow separately, one moving in a three-dimensional environment avoiding light and the other on two-dimensional backgrounds where the light allows it. This dichotomy between lighting and darkness will be the basis of the puzzles that we find ourselves, since by alternating the control of both we will have to create paths that allow them to advance through the chapters that make up the adventure. You will have to use levers and switches, push objects and play with the light shadow dichotomy to solve puzzles that are never too demanding. Artistically the game is a delight, with a very attractive dreamlike and surreal visual section. Its peculiar narrative is also remarkable, supported by a superb work of localization to our language with texts and voices in Spanish. This is a relaxed title with a message to enjoy while we hit the coconut and contemplate its excellent staging.