You are here: Home / Review / Spinch, PC and Switch Reviews: A sensory experience 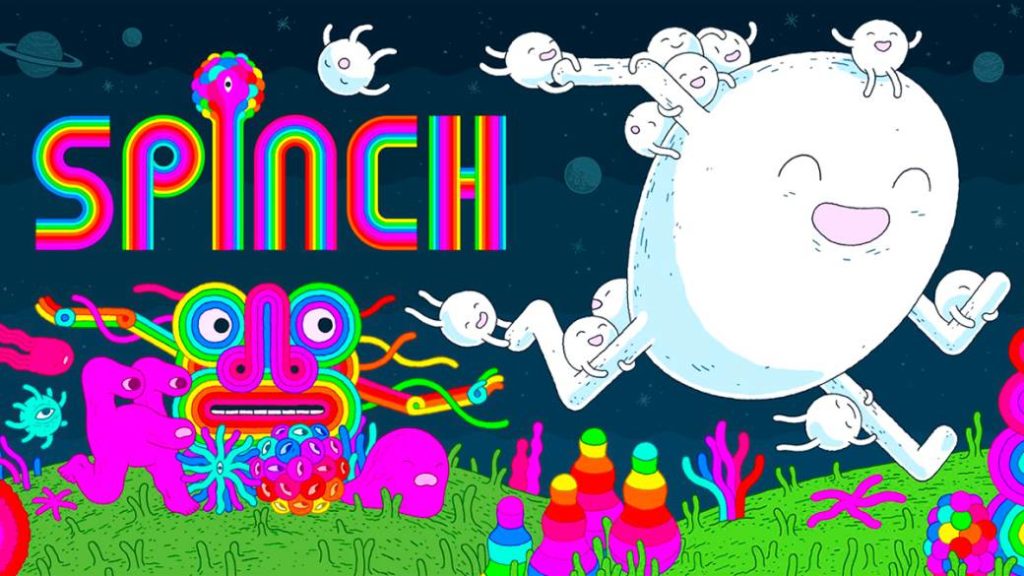 We take a look at an eye-catching yet challenging new platformer by Akupara Games and award-winning animator Jesse Jacobs; now available on PC and Switch.

There is no doubt that the genre of 2D platforms is living a new golden age thanks to the most varied proposals, from ambitious titles by large studios to the most artisan proposals by independent developers. And it is in this second group in which we can fit Spinch, a psychedelic platform in two dimensions with a colorful staging in the purest retro style, the latest from the Akupara Games studio along with the award-winning Canadian animator Jesse Jacobs and the editor Queen. Bee Games. And the result is none other than an original and challenging old school platform video game, already available on PC and Nintendo Switch at a more than adjusted price of 12.49 euros in both systems. Let’s see what such a particular proposal offers for lovers of retro experiences and challenges at the highest level.

Spinch puts us in the shoes of – worth the redundancy – a Spinch, a friendly organism of great agility and content size that aims to recover its lost young in a colorful world full of bubbling psychedelia. Right from the start, we let ourselves be carried away by such an amazing artistic design, marked by a practically unique personality in the medium and that draws directly from the pictorial and musical culture of the 60s, all through the work of the aforementioned artist Jesse. Jacobs and putting on the screen a whole amalgam of colors and geometric shapes that mixes spirituality, alternative realities, nature and technology that will not go unnoticed by anyone who gets caught up in such a suggestive format, both visually and soundly. Although beyond his original personality, Spinch hides a very traditional platform, both in concept and in gameplay, and that yes, he lets himself be played in the best of ways.

So much so, that the control is really simple, with the joystick to move, a jump button and a dash button, a kind of valid impulse both on the ground to run faster for a few moments and in the air so that our jumps go further. To all this we must add a very grateful resource in games of this type, where agility and frenetism have such a presence, which is none other than the rebound between narrow walls and the possibility of climbing vertical surfaces based on small jumps.

The result is a small character that moves like a charm, in a precise way that even allows certain corrections in the jumps to adjust our movements in the most delicate sections, which will not be few. In this sense, Spinch offers sufficient guarantees at the playability level so that the most technical players – and patients – can express such a challenging proposal. 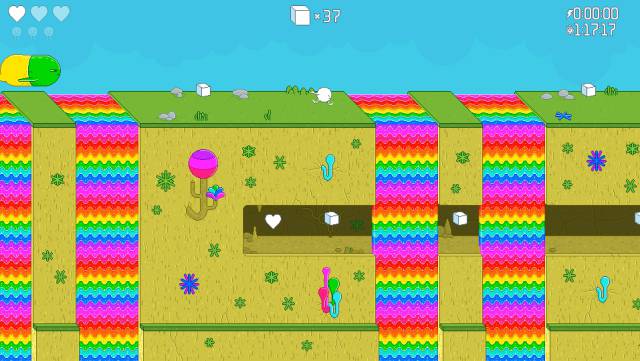 And it is that Spinch is not an easy game at all in spite of its carefree style; Let no one be fooled by such a sly appearance. Spinch is a demanding video game, with especially tough sections at the level of difficulty and in which millimeter jumps in the middle of the race and trial-and-error mechanics take center stage throughout its development, a more recommended title for seasoned players on platforms from other times than for novices in the genre.

And is that even though the first half of the adventure is more or less affordable, it will not be until the second half and, especially, the final stretch when things get ugly, very ugly; and not in the visual aspect, precisely. In addition, each phase is timed and hides different collectibles, with a special presence of the lost babies of our beloved Spinch, little creatures that will help us in the confrontations against the final bosses of each world. As a curiosity, we can also rescue babies in certain unlockable bonus stages, all so that the mini-Spinch do not get crushed to the ground … 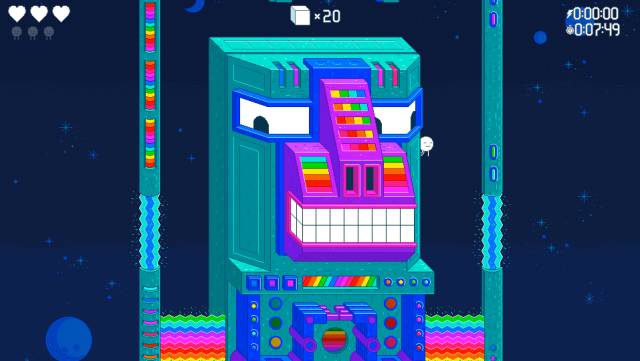 Speaking of collectibles, we can also collect small cubes scattered throughout the levels; Upon reaching number 50, an invincible mode will be activated momentarily, something that adds some strategy to its development since we will not be able to choose the exact moment in which this fleeting God mode is activated, but it will do so when it reaches that figure.

So much so, that sometimes it will be of great help at certain times and in others we will squander the opportunity by collecting too many cubes in sections where they are not necessary. And if we focus on the vitality of our Spinch, we will discover certain inconsistencies in the damage received from different enemies and traps. Some will subtract a heart of 4 or 5 that we can have; others will kill us with one blow. In addition, and due to its particular artistic design, we will not always be certain whether a specific element is aggressive or not, the recurring mechanics of trial and error appearing again. 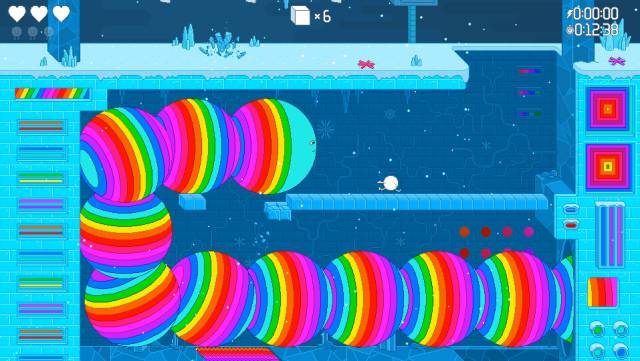 Another vital element in the development of the games is that of the control points, with a somewhat debatable distribution of the same; And it is that in certain areas we will have a really bad time dying successively and having to repeat the same section over and over again until we find the perfect combination of movements. As we say, Spinch is a title that can despair even the most seasoned, with which it is likely that many players, attracted by its striking personality, will come face to face with a difficulty perhaps not entirely well adjusted and that clearly is unfair on many occasions. Even so, and with enough perseverance, it is possible to advance with some ease through a demanding experience as well as rewarding, to which we must add a well-adjusted duration that does not extend more than necessary.

Beyond its frenetic gameplay and its firm commitment to speed and continuous challenge, Spinch is especially striking for its audiovisual section. Already from the menu itself we can see the decidedly strident bet of an artistic design in which the vivid colors and the most disconcerting pixelated illustrations will inevitably catch us. 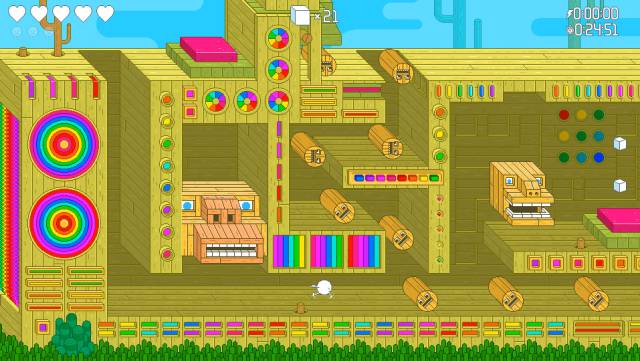 The work of artist Jesse Jacobs, the title does not show particularly refined animations or highly detailed elements, but the visual bombardment is such that we will quickly feel comfortable in its hypnotic universe. Its retro appearance is practically unique – special mention for the different final bosses and their designs and patterns – something that also happens with its sound section, with very catchy electronic themes that are born from the mind of hip-hop artist Thesis Sahib. On the whole, Spinch is not technically brilliant, but his overwhelming personality leaves a mark; and for good.

Spinch bursts into the indie scene through a unique staging based on an audiovisual psychedelia that is very rare in the medium and that manages to catch us thanks to an overwhelming personality, as very few titles with similar characteristics have achieved lately. To all this we must add a demanding and very challenging gameplay from the second half of the adventure, a hilarious journey that is not particularly long but very intense, marked by the aforementioned trial-error mechanics. And while Spinch does not represent the quintessence of the 2D platform genre, it does position itself as a very valid option for speedrun lovers or for those players looking for a challenge to match, with the added addition of surpassing themselves by achieving better marks against time.