You are here: Home / Review / SuperEpic: The Entertainment War, Reviews: Death to pay to win! 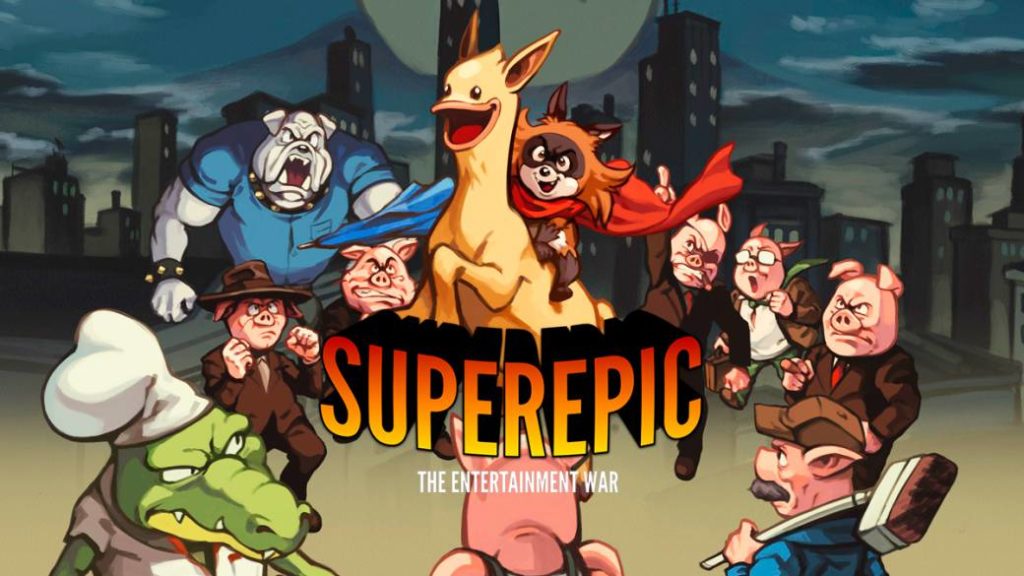 We analyze the heroic metroidvania of the Undercoders studio and its critique of the video game industry, in its version for Nintendo Switch.

The Undercoders studio, based in Barcelona, ​​returns with SuperEpic, a video game that mixes critical industry with humor in abundance. An adventure that goes around the concept of metroidvania, uses some elements outside the video game itself with great success and has, above all, a lot of personality. Will we manage to free humanity from the yoke of Regnancorp?

The plot revolves around a large video game company that has taken over the monopoly of the industry and controls the population with its abusive micropayments. The hope of this nation lies with Tan Tan, an intrepid raccoon and his friendly flame Ola.Our legendary adventure begins when we receive a strange call through an ancient console, where a mysterious figure summons us to save the world from this diabolical company. For this we have to break into its headquarters and put an end to the RegnantCorp regime. 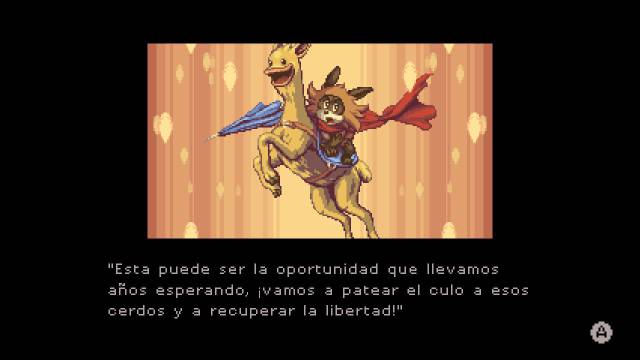 In the skin of Tan Tan we enter the central offices of RegnanCorp accompanied by our inseparable flame, where we receive an employee who offers us free lives or gems for some of his games. With this welcome we can get an idea of ​​the kind of company we are dealing with.

In our ascent through the following departments that make up the building we will notice the presence of other colleagues in the fight against the company. Xaloc, Migjorn and Gregal will help us improve our weapons and skills, yes, for a small fee. We will also encounter another fighter of the cause, Boxcar, accompanied by his alpaca Kase, who, in principle, are a bit suspicious but will end up establishing a certain friendship with our friendly protagonist. If you have paid attention, the name of the llama, Ola, and that of this alpaca, Kase … And it is just an example of the multiple references that the game makes to the current pop culture, in this case of the viral meme Ola K ase, whose image was a flame. 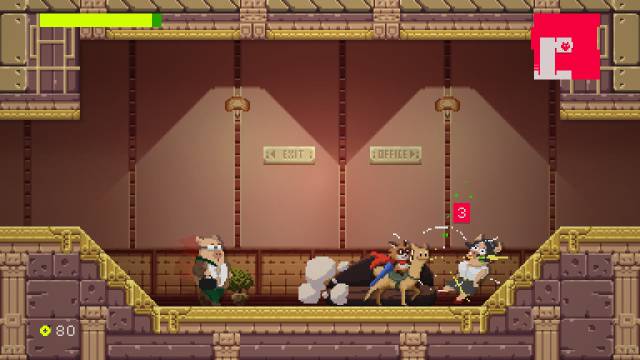 The title is a classic action and adventure type metroidvania with touches of role, combustion mechanics and pixel art aesthetics that comes to the hair to defend the classic games against the current ones made by large companies.

A satire of the industry

Each level of SuperEpic: The Entertainment War is associated with a department of a large video game company. Thus we find, for example, the rest area of ​​the employees, created by RegnanCorp so that its employees enjoy leisure in the workplace and thus do not have the need to return home with their families. This type of rest and leisure areas can be seen in many companies such as Google, Yahoo or Facebook.

The creators of the game help us to be patícipes of the history making constant reference to micropayments that we ourselves live in our wandering, either small charges for improvements in the weapons or when dying in the middle of an area without point of saving, where they give us the option to be reborn for half of our money. 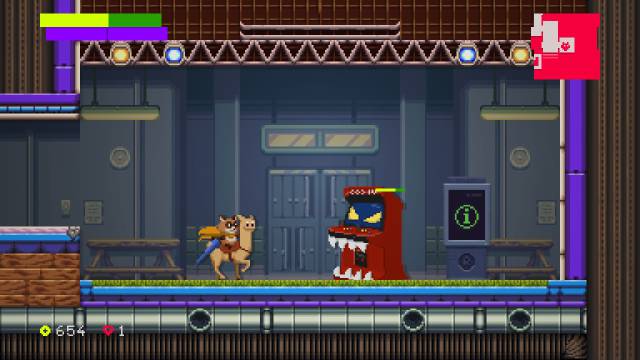 There is no need to fear for losing half of our capital because RegnanCorp gives us the solution: we can undermine Pigcoins and exchange them for game currency, but the exchange rate is exaggerated, until we get to pay billions of pigcoins for a few Thousands of dollars.

Throughout the eight departments we will see how the atmosphere, music and enemies change to beat in line with the areas of the company they represent.

The atmosphere of RegnanCorp is very successful, especially the server area, in which it seems to be walking through endless rooms full of terminals. Among the minions we find some pretty funny winks, such as the pig with a jumper that wears virtual reality glasses very similar to the PSVR, recreational machines with sharp teeth, cast drones like those of Amazon, business sharks and pigs with their eyes covered in the legal department, as the representation of justice. At the end of the levels we find final bosses that although at a visual level they have their crumb, at the level of the rest of the game, they cannot be too challenging.

Exploring each area of ​​the map is vital to improve our skills, find keys or items that allow us to continue and even, on more than one occasion, since the development of the game is non-linear, we must go back to find the path that leads to the Next zone chief. 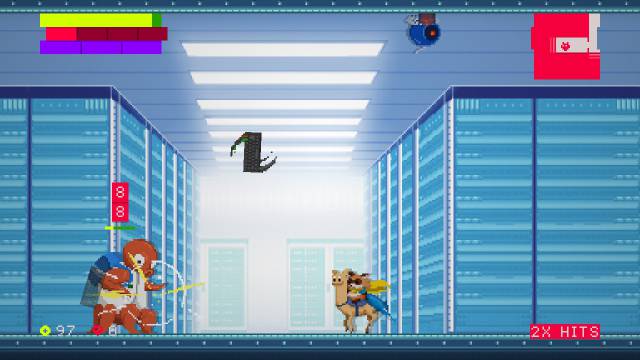 Sometimes these roads are not obvious, and we will spend a lot of time looking for a hole to sneak through. In this case the map is great for us, which we open as we explore, so we see the rooms where we have been, if they have connection with another, if we have left any area of ​​that room unexplored, etc. What we have missed on this map has been some way of putting indicators, since we will have to go back to some specific rooms and we have no way to mark them.

Sometimes, especially in the final phase, we may find it a bit tedious to return again and again to the same areas, and the distribution of checkpoints is increasingly distant, making the metaphor of the save point more evident. Reaching almost the limit of life and crossing a room full of enemies, finding a storage point is like finding a bathroom at a time of utmost urgency. Or a bonfire in Dark Souls.

The combos system is quite successful, since we can combine up to three types of weapons and different attacks. If we combine them with comparable objects we can do more damage, get more money, or recharge faster power to continue giving firewood. Within these items we can find winks to series like Dragon Ball or Superman. And surely more than one you sound of other video games some special skills that we can acquire in the gem store. 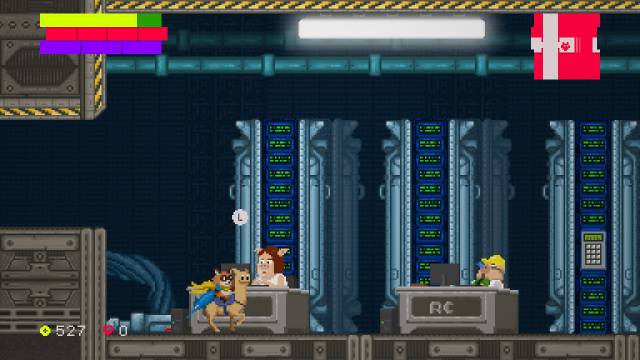 The game has the possibility to open some areas using our mobile. On the screen we will find a QR code, and when scanning it with our mobile or tablet we open a web application. This application can be the version of a hyper mobile game known as Flappy Bird, Crossy Road, or Candy Crush for putting some examples, or, if we scan it in a terminal of Pigcoins, it will unlock the area in which we are and, as We commented earlier, we can get coins to redeem in the game.

The idea of ​​unlocking game content through a small challenge on our mobile seems very original to us. The mini games are quite enjoyable, the versions are very successful and it shows not only the experience of the study in this type of games, but the care with which they have created this new title.

The visual style used works like a charm, with a PixelArt style very successful because of the fun character design and its worked animations. The scenarios and the variety between them, as well as various effects, do the rest together with a soundtrack full of rhythm and variety. 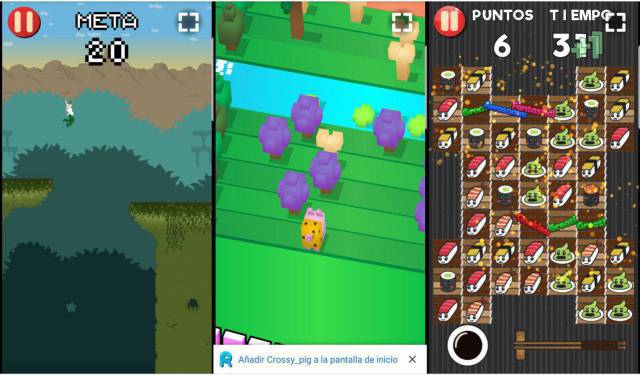 Undercoders has managed to create a very complete Metroidvania-style video game, with well-adjusted touches of role and exploration. The story and the characters are a satire of the industry, especially of the big companies, and it is full of messages and constant references that, from the humor, leave a very clear message from their creators. Solid and convincing at the playable level, with additions that are worth discovering as crossmedia elements and with a careful audiovisual finish, SuperEpic is one of the great surprises that 2019 leaves us in a genre not very prolific like yours.