You are here: Home / Castlevania / The vampire myth in video games 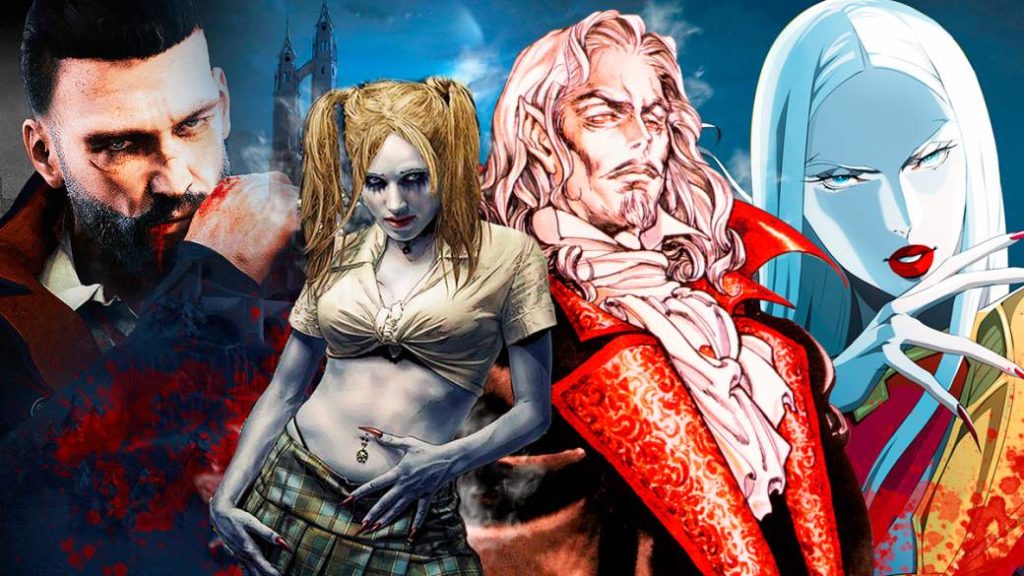 We review the figure of the vampire in video games, from the inspiration in Dracula to the adaptation of The Masquerade

On September 10, the night returns to envelop the city with Vampire The Masquerade: Shadows of New York. We are entering the autumn, time at night they begin to claim their territory and Halloween is celebrated. Homes are filled with scary pumpkins and cute decorations. We dress up as creatures and villains that we recognize from classic horror movies: witches, zombies, werewolves, mummies … And, of course, vampires cannot be absent. This mythological figure who has transcended popular culture is also the epicenter of many stories in video games. The role-playing game The Masquerade has its own saga, with Bloodlines 2 as the return of a cult title. Nor should we forget Castlevania and its influence on a whole genre, or Vampyr, which invites us to experience the curse with the ethical dilemmas that derive from it. Today at FreeGameTips we talk about unforgettable vampires that we have met on our console and PC, both the most traditional and other modern versions.

In the cultural magazine Democresía, the vampiric myth is analyzed as the result of the primordial fear of death: “Since ancient times, human societies have developed beliefs and superstitions related to death: from those that religiously seek to avoid the end of existence, even those who desperately seek immortality. In this sense, the fear of death, the rites linked to burials, the fear of the depredation of the corpse, the idea that life is in the blood and its relationship with various diseases, have formed the basis on which have arisen diverse myths ”.

Thus, we find undead and blood-eating creatures in different mythology: Lamia, Zeus’s punished lover who fed on the blood of children; Lilitu, the babiblónico demon that devoured the blood of newborns; or the Bulgarian vampire, the soul of an evil person who came out of the grave thirsty for the blood of the living. The historian Bozhidar Dimitrov, a student of this last legend, recounts in Expansión how during the funeral rite a stake was driven into the deceased to prevent it from rising. 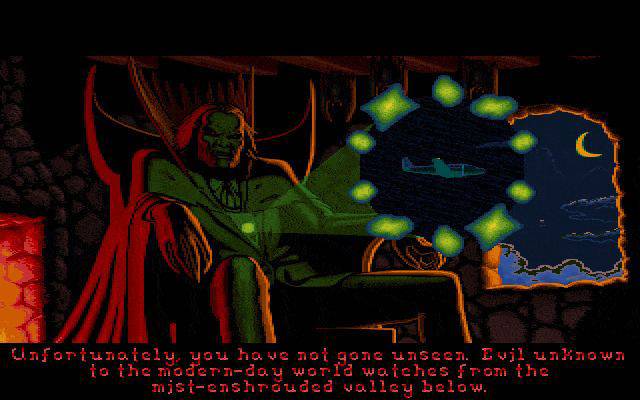 The Dark Lord in Veil of Darkness

Through literature, the figure of the vampire has been taken up based on its legends. The Vampyre, by John William Polidori; He brought the character of Lord Ruthven a very different romantic perspective from that of the blood-sucking monster. Thus, the vampire became an attractive, pale and charming aristocratic. The novel Dracula, by Bram Stoker, continued with the version of this figure, inspired by the figure of Vlad Tepes. Thanks to the cinema, Stoker’s vampire acquired great notoriety and has become one of the greatest references of the myth. Between the duality of eroticism and terror, the vampire seduces the public today with different artistic expressions.

The long-lived Konami saga has as one of its narrative axes the figure of Dracula. However, the game does not treat Stoker’s vampire faithfully. In the essay Incarnations of Dracula (Ragnhild Jønsberg Aspeggen), the Castlevania saga and the perspective it gave Dracula as a villain surrounded by icons of the western horror genre are analyzed: “Castlevania is a Japanese brand that is not only inspired by Dracula But in the sources that inspired Dracula. […] The premise of the saga is simple: we are a vampire hunter, and our mission is to go through the labyrinthine castle of Castlevania, defeat Dracula’s servants and then finish him off. In each installment of the series, there are slight variations to this formula. From the beginning, Castlevania has used a plethora of classic western horror clichés, borrowed from Hammer Productions, Universal Movies, and gothic literature. The player faces enemies that are reimagined versions of Frankenstein’s monster, the Swamp Thing, the mummy, Mr. Hyde, the Grim Reaper and other monstrosities, all of them in the service of their lord and master Count Dracula. “ 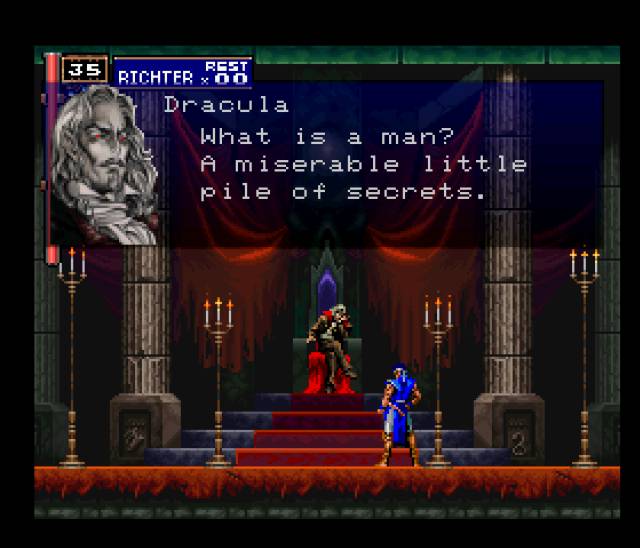 Iconic image of Dracula in Castlevania

Within the Castlevania saga, we find a vampire who comes from Victorian literature: Carmilla. From the homonymous story by Sheridan Le Fanu, this lady appears as one of Dracula’s subjects. In the essay Villains and vixens: Representations of Female Vampires in Videogames, it is analyzed how the literary Carmilla was a transgression of the vampiric myth and how this was transferred to the Castlevania saga: “Sheridan LeFanu had seen a much more subversive character: a vampire woman , a disruptive character who had undermined the concepts of female conformity and passivity, and who is perceived as a destabilizing force of the ‘construct of gender identity resulting from sociocultural hierarchies’ (Wisker 2017, 150). In a hypersexualized reading, the vampires become a mixture of violence, seduction, and a voracious feminine sexuality ”.

The narrator of the novel is Laura, one of the victims of a vampire who seduces beautiful girls. In Castlevania, the essay cites the simplification that the character of Carmilla, whose erotic orientation is removed to fit in with the heterosexual fantasy: “She is usually introduced by her maid Laura, and she is depicted as a woman of great beauty who wants to conquer and deceive. the vampire hunter before murdering him. At other times, without losing her identity as a female creature, she appears as a more spectral entity, naked or half-naked and mounted on a giant skull. In their versions, the games highlight her seductive capacity and portray her as a dangerous temptation that later succumbs to a masculine force ”. 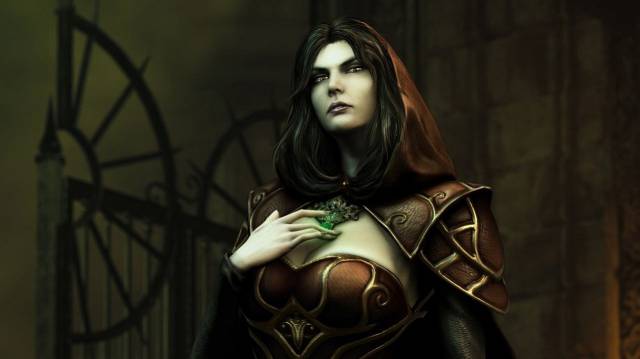 In addition to Castlevania, it is also worth mentioning Veil of Darkness, a graphic adventure with RPG touches from Event Horizon, in which we faced a Dark Lord inspired by the figure of Dracula. In the final combat, we should not forget the rules when facing a vampire: use sunlight, avoid his hypnotic gaze, protect our neck and deprive him of his resting coffin.

Vampyr and the ethical dilemma of the conscious vampire

Through this title of DONTNOD, we were invited to incarnate Jonathan Reid, a recently vampirized doctor who had to deal with his new nature, while facing the constant dilemma between his own survival and the ethical responsibility of killing to survive. . Stephane Beauverger, the game’s narrative director, explored in an interview for IGN how they had approached the vampiric myth from two sides to address the difference between good and evil: “The first thing is that the vampire is a conscious monster. He is a monster who knows exactly what he is and has to rely on deception in order to represent his true nature. Unlike the werewolf or the zombie, he is not a brainless killing machine and, because he is intelligent, he sometimes suffers emotionally as a result. The second thing is that vampires are popular because they go about questioning ourselves on issues that are important to humanity: death, love, sex, seduction. A vampire is Eros and Thanatos together in a perfect way ”. 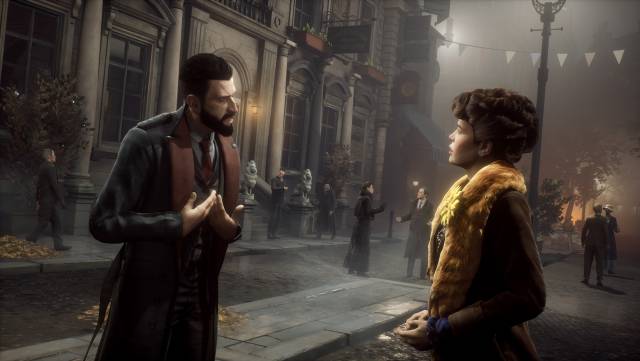 In Vampyr we can feed on other characters, whom we can investigate and decide if they deserve to die. Beauverger told GameCrate how the executioner role is explored through a conscious vampire: “In many video games, you become the strongest, you must kill and survive. The player is seldom invited to reflect on the fact that he is killing individuals. What fascinates us is putting the user at the core of this duality. We tell him: you are the predator, and you will meet people with their own lives and their problems, with their friends, their worries and concerns. And you will decide whether to forgive them or not. We always want them to question the fact that they are about to take a life. “

The Masquerade: from the modern vampire to a mature perspective

Vampire: The Masquerade is one of the most popular board RPGs of the genre. Created by Mark Rein-Hagen and White Wolf Game, it is based on the fantasy universe of World of Darkness, which takes inspiration from novels such as Dracula, the Vampire Chronicles (Anne Rice) or the Necromantic Chronicles (Brian Lumley). Set in a contemporary era and displaying a punk-gothic aesthetic, La Mascarada receives its name from one of the norms of vampiric society: its objective to hide its existence from humanity, while controlling society from the highest spheres of power. The vampires here belong to a range of clans, in which different versions of the myth are contemplated, from the sophisticated knight to the brute beast. 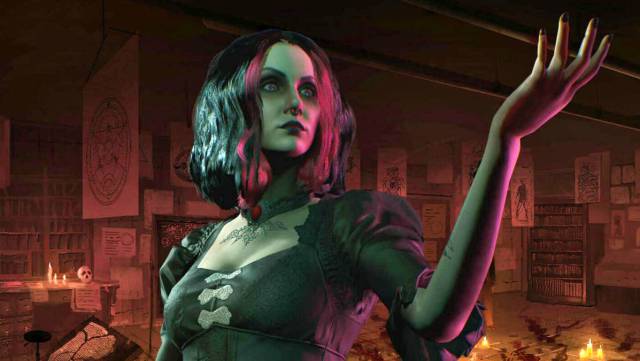 Image from Vampire: The Masquerade Bloodlines 2

In digital entertainment, Mundo de Tinieblas has had its own video game saga. With the next release of Bloodlines 2, Paradox wants to take advantage of the resurgence of the vampire in fiction to bring a sequel that brings more maturity to the myth, according to Nikaht Ali, producer of Paradox, in DualShockers: “What I love about our version of the myth vampiric is that she is mature. If you look at other current vampire works, you will see that they are very much aimed at teenage audiences. People who grew up with vampires are looking forward to something more mature. When we get older, we want to see that maturity in the media ”.

Although the vampire has traditionally been presented as a villain, embodying this creature of the night can become an attractive experience, as some titles have shown us. Bethesda, in its popular role-playing sagas Fallout and The Elder Scrolls, presents vampirism not as a curse, but as a special condition to take advantage of. 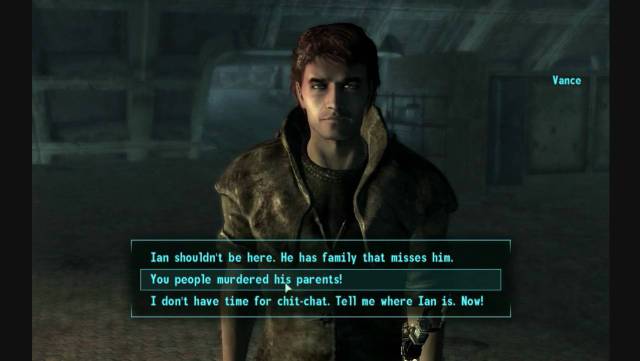 Vance, leader of the Family, in Fallout 3

In Fallout 3, hematophagy is a mutation that we can acquire during the mission “Blood Ties”, granted by Lucy West – a character that refers to Lucy Westenra in Dracula. If we follow her, we will meet the Family, a group of vampires that have developed this mutation through which they can only feed on human blood. If we obtain affinity with them, we can acquire this mutation and without giving up conventional food, with which we will obtain more health from the plasma bags.

However, hematophagy in Fallout does not cause side effects like photophobia. Instead, in The Elder Scrolls it is posed as a disease that, if we wish, we can adopt as a chronic condition. If a Sanguinare Vampiris attacks us and we go three days without treating each other, we become vampires. With this, we become hypersensitive to daylight, we must maintain our blood-sucking diet and carry our identity with discretion so as not to be hunted. On the other hand, we will access unique and very powerful spells. It is worth mentioning the Dawnguard expansion of Skyrim: in it, we can join the Dawn Guard to fight the vampire Harkon, or ally with him and agree to embrace our dark identity with new powers. 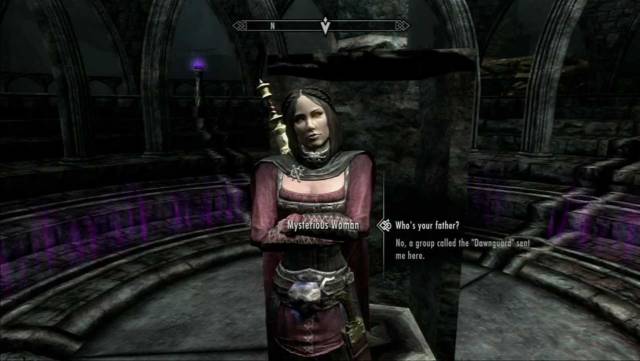 Serana, one of the most iconic characters in Skyrim: Dawnguard

Both as bloodsucking beasts and as enchanting knights of the night, vampires are a highly influential figure in the darkest narratives. They may have hypnotized us during our games, but the attraction they exert on us is undeniable. However, it is impossible to hunt down all vampires in a single report. As is often said, there are not all who are, but there are all who are.