You are here: Home / Review / TOHU, Reviews: in search of the truth 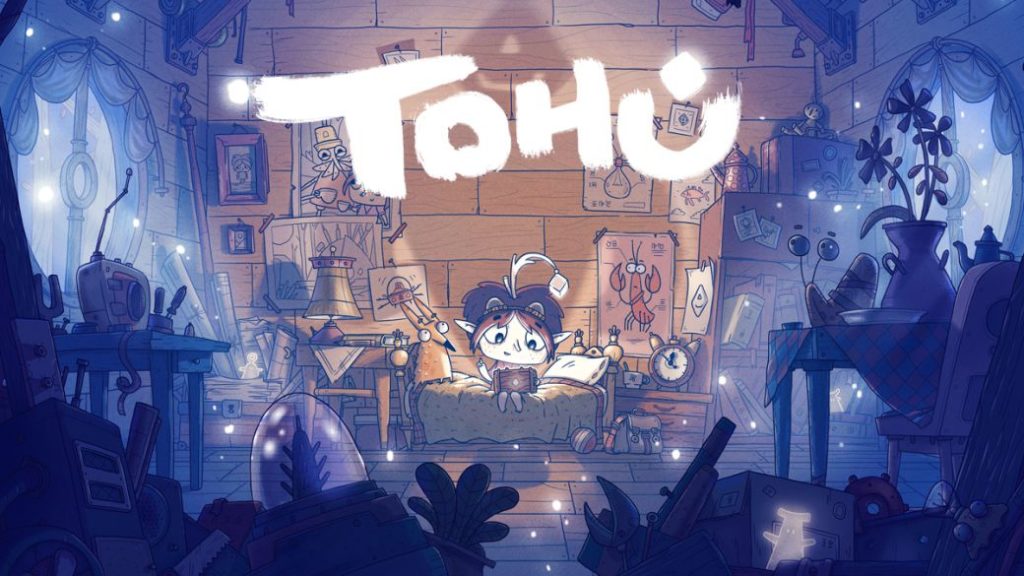 We enter a Point & Click adventure full of strange beings, an original soundtrack and a hypnotic environment, although with clumsy gameplay.

With creative freedom, emphasizing the extravagant and imaginative interpretations, we will venture into TOHU, a Point & Click video game full of puzzles and with a mission to save our world. On this occasion, we will do it through the eyes of a girl and her mechanical alter ego, Cubus, a kind of robot that will help us on more than one occasion to solve the puzzles. Exchanging characters, meeting strange beings and pursuing our goal, we will begin a most iconic adventure to discover the truth about ourselves and about the enigmatic Sacred Engine that gives life to our world. Developed by Fireart Games and distributed by The Irregular Corporation, TOHU launched on January 28 for PC, PlayStation 4, Xbox One, and Nintendo Switch.

Save the fish planets from chaos

It was a calm night and the fish planets were sleeping peacefully, they remained calm until a mysterious unknown light arrived. From the shadows, a strange creature emerged whose sole intention was to cause destruction. The Sacred Engine broke down and the Fish’s entire life was in danger, so someone had to repair it before it was too late. From that moment on, a little and adorable girl will set out so that everything returns to normal as soon as possible and she can see her world shine as it always has. But she is not alone, she can exchange with Cubus, a robot that will help us to pick up heavy objects and destroy some element that blocks our path, in this way we can solve a puzzle. In truth they are simultaneously the same person, but they will make a rather interesting couple. As we progress through the game, we can learn more about how the girl has this interesting technological element and the gadget that it carries with her.

However, do not expect a great story or have a premise in which the narration takes center stage, because you could be disappointed. In this video game a story is told that in the end remains in the background, covered by the different puzzles that we find ourselves and by the abrupt changes to new scenarios, where they will be made very short, and it is that this video game can be completed in approximately 4 hours. Complementing the narration, in TOHU we will not have voice dialogues, except for some babbling of our protagonist and other characters, and even a distant narrator’s voice that will tell us the story as if it were a story. However, the girl will communicate with us through different gestures in which she will tell us if we are on the right track or not, if we need to choose Cubus or to call our attention if we have been absent. 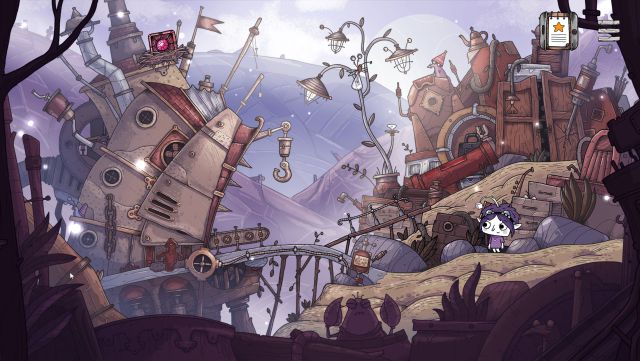 The story goes into the background when sometimes our own mechanics end up not fitting in the space we are in, becoming clumsy and almost impossible to solve. TOHU does not provide great novelties of the genre, but it will allow us to interact with different areas and objects that are around us, even in this way we can achieve collectibles, some cards with the drawing of the being that we have identified. Even so, and despite feeling so alive in the place, our movement is slow, a little imprecise and with a response from our character that will make us get on our nerves. There are times when we can jump and even climb, do not expect to do it quickly because it will be totally impossible and tedious, and even canceling an action can be lost.

Unlike other Point & Click, in this one we will not have the “hot” points or known as hot spots, but it will not be very essential because at first glance we can get an idea of ​​how to face this new space. What if it gets strange is that to get to a place we have to do a whole chain of actions without being able to directly click on our final goal. That is, if we want to climb a pyramid of boxes, we have to click on each object and until one action is finished we cannot continue with the next. In fact, using the double click to go fast will not give very good results, so we will see how our character moves to the point calmly. 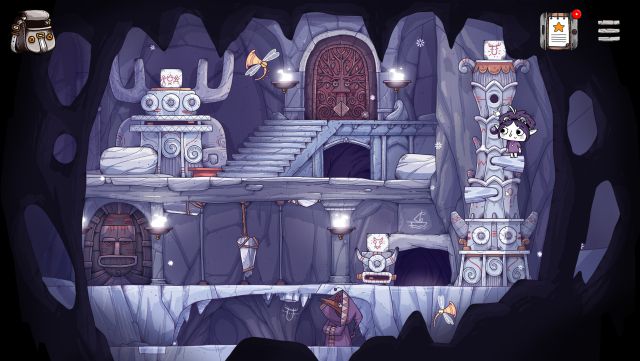 Puzzle system with an ideal balance

Something in which TOHU stands out is its puzzle system. They have managed to perfectly create the ideal balance between puzzles that are not easy, but they are not extremely difficult either. Try to look for logic on some occasions, although they will be linked more to trial and error, showing riddles that will be in front of us without realizing it and, it will play with the perspectives so that we can find the solution. We will have different puzzles, from the classic ones of moving an object to reach another or calculating well to achieve a result, to cutting cables with a limited time, which causes a restart, generating randomly again, or also mixing different liquids to achieve a special potion . We may even fail, that is, if they see us and we cannot carry out each action correctly, they will move us to the last checkpoint. Sometimes it feels that the pace of this video game is slower when we get stuck and prefer to move back and forth without any predefined ideas. 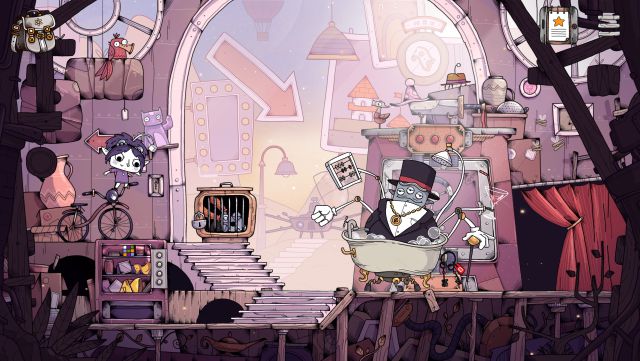 However, we can go to two elements of our interface: a backpack and a book. The backpack will be our inventory and which we will consult to use those objects that we collect, yes, as soon as they are no longer useful our protagonist will take care of getting rid of them, so we will never have an unnecessary accumulation. The book will be composed of the objectives of our adventure, the collectibles that we explained previously and the clues. But, and how what clues? Well yes, TOHU has implemented a quick timing minigame, which can end up being a bit annoying, but when completed it will take us to a series of images. These will not reveal the solution in a very blatant way, but we will have to decipher them and get involved to make a correct interpretation. 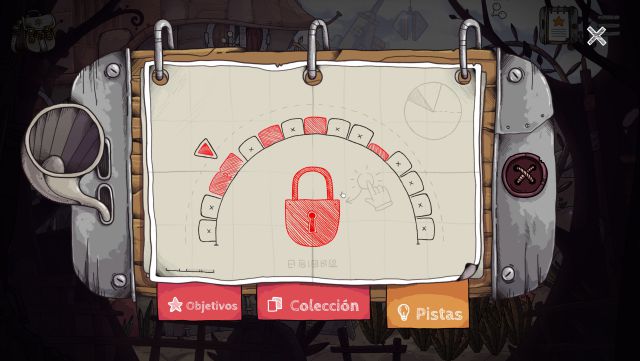 His visual style is overwhelming, but at the same time beautiful with the creation of hand-drawn drawings and an ability to attract our attention from any point of view. Its environment is completely related to each puzzle, so that simple union makes each scenario feel completely different, although at the same time very similar due to its great disorder. It uses a pastel color palette that makes it very pleasing to the eye, while we observe how our protagonist makes different animations depending on the object that interacts. In addition, we will have different pieces of music that will help us immerse ourselves in this picturesque world. And, the soundtrack is composed by Christopher Larkin, the award-winning composer who created the soundtrack for Hollow Knight, and who has managed with this video game to create truly perfect atmospheric and soft compositions. It is recommended to put on headphones to really enjoy it. 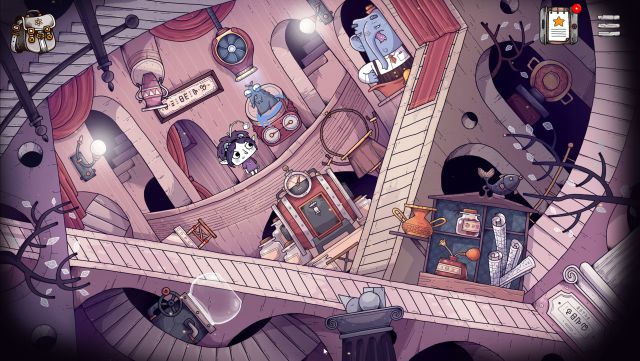 In TOHU they have focused on capturing a world so surreal and so imaginative that it outshines everything else. We will start with bright expectations when it comes to storytelling, but ultimately it will not conquer, completely taking a back seat and making us focus more on other aspects. Its visual style along with the soundtrack will make you love and catch your attention, as well as creating an ingenious design that links and links the entire environment with each puzzle. These have a good balance of challenge and fun at the same time, but they limp in the gameplay, being quite slow, basic and imprecise.