You are here: Home / Review / Untitled Goose Game, Reviews: the most famous goose in the video game 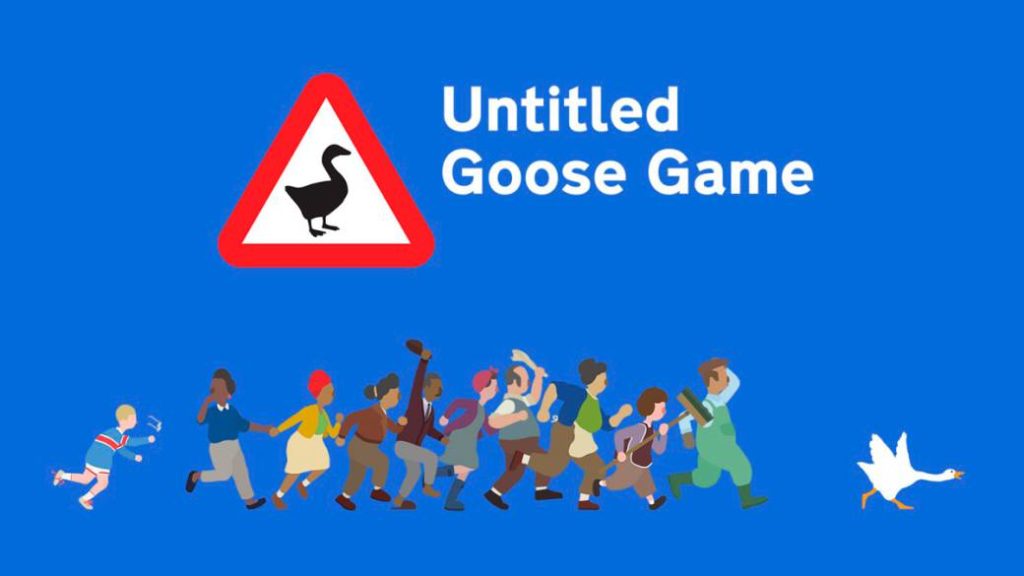 We analyze Untitled Goose Game, the work of the Australian House House that arrived a few days ago and is triumphing both on PC and on Nintendo Switch.

On September 20, a very naughty goose conquered players around the world when it invaded many PCs and Nintendo Switch consoles. Since then, hundreds of fan-arts have appeared on the networks and have demonstrated the viral nature of Untitled Goose Game, the title of the independent Australian House House. Through simple mechanics, a series of task lists and insistent squawking, the puzzle game with a special style and focus that occupies us, has managed to be among the best sellers. Let us analyze each of its sections to learn more about this proposal.

From a small idea to success

Michael McMaster, Stuart Gillespie-Cook, Jacob Strasser and Nico Disseldorp are the four main creators of Untitled Goose Game. Four Australian developers who used to joke and imagine a goose doing their own thing in a small town by disturbing residents through various tricks. Those ideas ended up transforming into the game we have in hand today, which has reached PC and Nintendo Switch after having suffered a delay, since initially its launch was planned for early 2019.

The first announcement we had about the game was on the Nintendo Direct of August 2018. Thanks to a simple trailer, we could begin to capture the essence behind the title and we knew it would be a success. This has been the case, since Untitled Goose Game has managed to place itself in the TOP of sales of various countries in the world throughout the days after its launch.

A simple but effective playable proposal

What makes Untitled Goose Game good is its simplicity and the effective way in which it has been carried out. The players embody a goose, a bird known for being able to annoy humans thanks to its shrill squawks and a skilled beak with which to pick up objects and move them wherever they want. We can do this and little else: open and flap the wings (although this has no playable function), bend down to make little noise when moving and enter stealth mode and run (without getting tired at any time, since the goose has no bar of stamina). 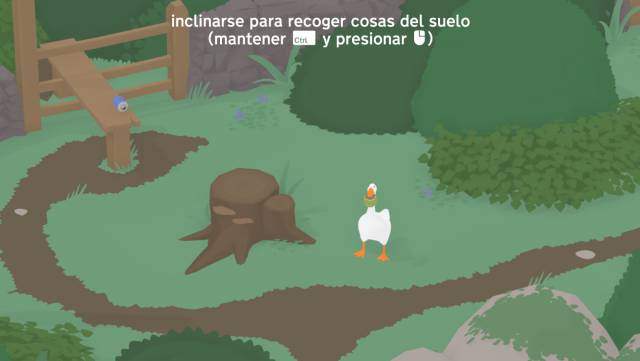 By learning this series of commands, which end up being very intuitive and we will soon learn, we can start playing. The first thing we must do is to advance through some green fields connected to a small lake and, after crossing it, we will find the town where we can make our own. Upon arriving there, we will see a list of tasks to be performed, which include missions such as: “enter the garden”, “wet the gardener”, “make the gardener wear a sun hat” and “gather various elements to a picnic ”, among others.

As you can see, not all tasks will be completely clear from the beginning, but we will have to explore the area in which we find ourselves in order to find out how to solve the small puzzles that arise. It is not too complex once we are done with the mechanics of the game, since we will see how there are different ways to perform some actions. For example, to fulfill the task of “wetting the gardener” we can steal an object and make it follow us to the lake (it will get in and wet our boots) or deceive it to place it near the sprinkler and activate it from outside the garden. 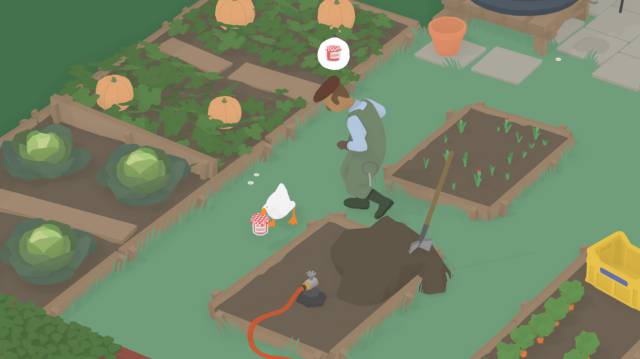 When we have completed a series of tasks on the list (it is not necessary to do them all, although we recommend that you do them) a new one will appear at the end of it, marked with an asterisk. This mission will be the one that gives us access to the next area of ​​the game and once we manage to fulfill it, we can move towards a new place, with new tasks to be performed. Of course, the complexity of the proposed challenges will increase as we move to the next area, but there will never be a mission that is impossible to accomplish. We just have to be persevering, explore every corner of the areas well to know where to find that object that is asked of us and, in general, let our imagination flow in order to find the answer to the series of small riddles that we should cross off the list . 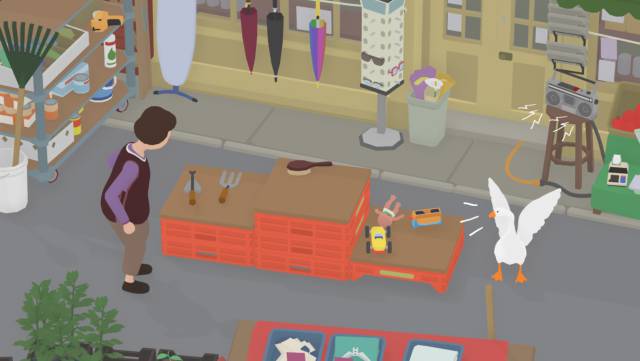 Another point to keep in mind is that there is no penalty for failing these tasks beyond wasting some time, since the goose does not have a life bar or the villagers intend to attack us. All they will do is scare us and hang signs of "forbidden geese" (which, of course, we can tear off). Therefore, we do not feel that we are punished if we fail a certain task and we can try again as many times as necessary until we achieve it.

In addition, the game gets us to feel some satisfaction in achieving the missions, since they will not give us any help beyond the aforementioned list of tasks. Therefore, it is we ourselves who must tie up ends and make use of our beak, croaking, stealth and running in order to complete the game. 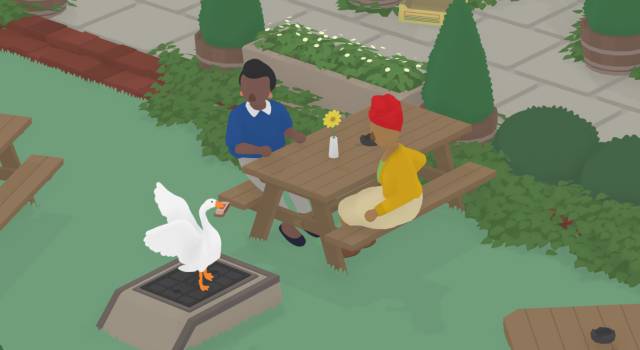 Endgame of the game: speedrun and new tasks

The total duration of the title is not too wide, since it only has about 5 chapters and we can complete it in about 3 hours. Even so, once we see the credits roll, there will still be much to do. After completing the initial five task lists and returning to the initial area where we started the game, we will be presented with new lists in which there will be more complex missions and that will encompass the different areas of the game. Therefore, they will not be limited in areas marked as before, but rather that the entire town will be connected so that we can make our own between the garden, the town center, the two houses of the neighboring neighbors, the bar area and the final area .

On the other hand, one of the lists of tasks that appear after completing the main game will propose us to complete it in less than 6 minutes. Come on, what is known as speedrun. According to the latest data we have when writing these lines, a player managed to complete the title in about 4 minutes, so doing so is possible although, yes, it will not be easy. 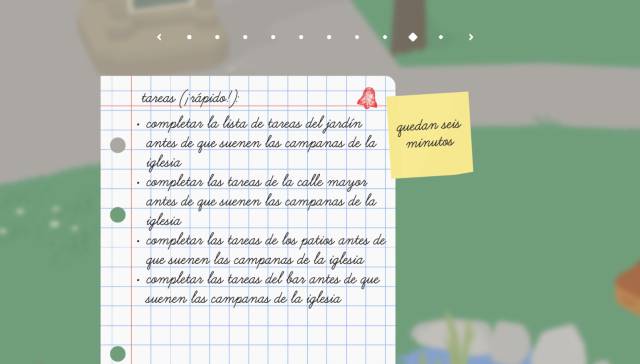 Untitled Goose Game has a very characteristic graphic section in which a bright color palette dominates and without lines that delimit the edges, so everything joins harmoniously as if it were a watercolor. This formula works very well for this type of game, since it makes it simple and lets us concentrate on the gameplay of the game.

As for the technical part, we have no complaints about the operation and performance of the game. There are hardly any loading screens, so we can move around the town without stopping the game. On the other hand, in our case we have not found any bug or download of frames, so you can see how the House House team has done a very good job in terms of optimization. 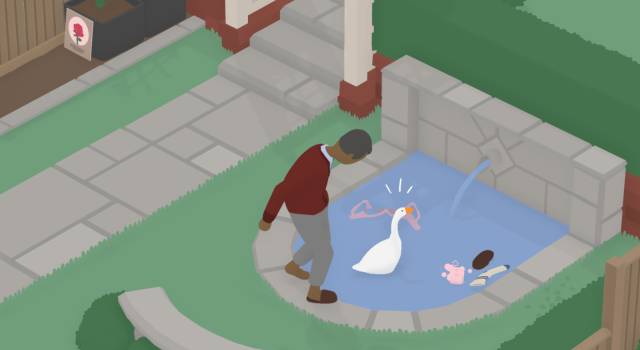 Finally, the soundtrack of the game is simple, composed of a series of themes in which the piano predominates, and reactive, since the music will intensify in the moments of action and will be more relaxed when we just walk quietly through the village . As for the sound effects of the goose itself, they are taken care of in detail so that both squawks and their footsteps in various materials feel very natural.

In short, doing the goose never sat so well in a video game and although the game could have reached higher levels, it is a simple title that triumphs with its proposals and has already conquered thousands of players around the world. The possibility that it ends up arriving on PS4 and Xbox One is in the air, but for now we can find it on PC (exclusive to Epic Games Store) and on Nintendo Switch. 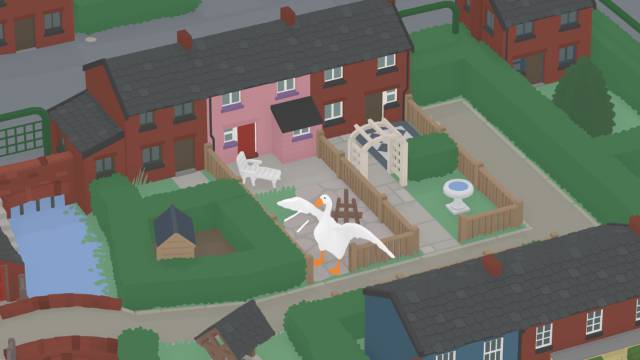 Untitled Goose Game is a fun and satisfying puzzle title that makes use of its simplicity and its distinctive proposal to succeed. We embody a goose that can squawk in a strident way and make use of its beak in order to annoy the neighbors of the English village in which the game is located. We will have to fulfill various tasks as we move through the 5 zones of the game and each of them will make us think of different ways in which we can carry them out. Although its duration is not very long, its ingenious system of levels will be extended even more when you see the final credits for the first time, at which time you will unlock various more complicated challenges and a speedrun mode. As for its technical section, in our case we have not encountered bugs or frame drops, so we can guarantee that the House House team has optimized the game effectively. Its graphic section is simple and beautiful and the reactive soundtrack of the game will help us feel immersed in the title and comfortable incarnating a very well-behaved mischievous goose.