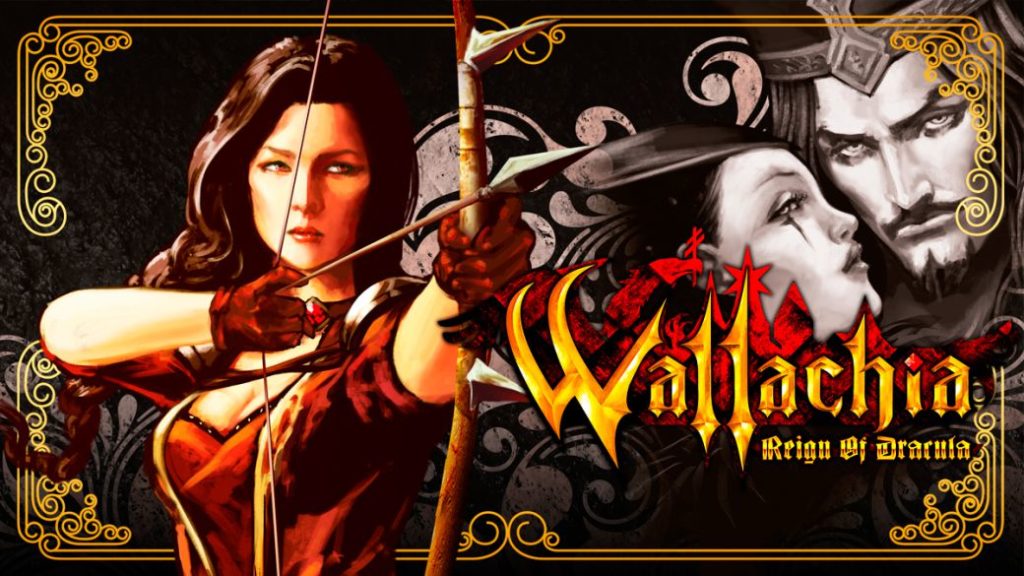 Contra + Castlevania + King of Dragons = a retro game that fans of Run ‘n Gun 2D will like.

“Appearances are deceiving most of the time”, Molière

Medieval settings. A protagonist warrior. Raw 2D gameplay. Pixelated graphic set between Epoch 8 and 16 Bit. And a title that alludes to Dracula. What is the name of the game? No, it’s not called Castlevania. “But is he at least a clone, a (grateful) bastard like Bloodstained?” That is the first impression, that is the comparison, the direct reference that your gamer brain will try to establish. But you would also be wrong, because Wallachia: Reign of Dracula is not a Castlevania as we thought, but something else: a great mix between Contra, King of Dragons and a Shinobi dressing. 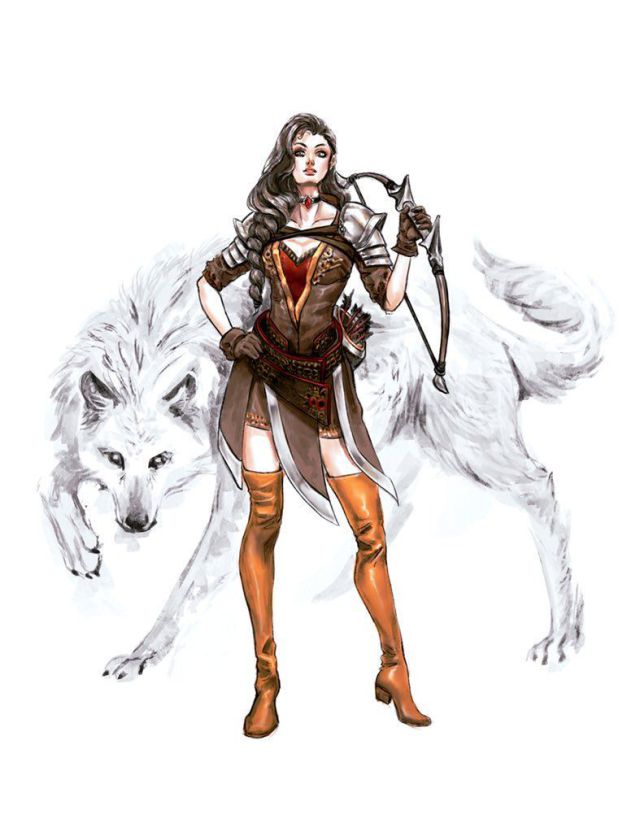 Forged in the free territories of the ‘Fan-games’, the French studio Migami Games knows what to do in terms of classic 2D games. Their are the great The Lecarde Chronicles 1 and 2, of the best unofficial Castlevania ‘bastards’ that can be found on the Internet. So, when they thought of launching their own game, they did not shy away from what they know: 2D gameplay, platforms, final bosses, pixelated scenes, etc. The result is Wallachia, a title that looks like a classic Castlevania and plays like a Contra.

And it is that, as a ruse in the plot, Reign of Dracula resorts precisely to the greatest icon of the horror genre, but not to the character created by Bram Stoker, but to the real historical figure who inspired him – and who is more terrifying for that very reason. . Wallachia tells us a family revenge plot of a warrior who returns home to Central Europe in the 15th century, to settle scores with whoever burned her house, kidnapped her brother and killed her parents. 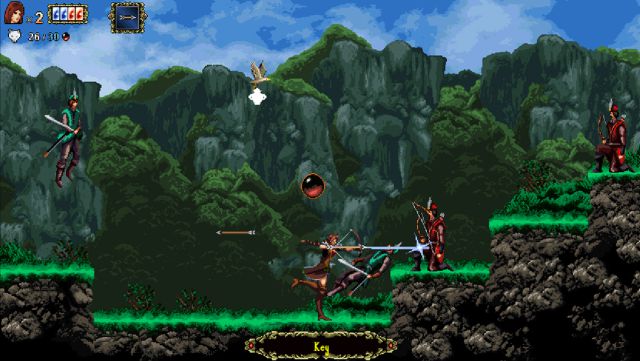 The story, given the shortness of the game, is hardly developed, and represents the weakest although it has interesting and dramatic moments given the fact that there are dialogues in the middle of the levels – confrontations with bosses. But Wallachia shows its retro side in this detail, giving much more importance to the gameplay. Of course, there are a series of cutscenes in animated comic format that are not bad – we will talk about the voices in the sound section, but there are a couple of surprises.

The game itself has 7 levels that can be passed in 5 minutes or less with a punch – the game challenges you to do them at timestamps like 4:14 min. Of course … it does not mean that in 35 minutes you will have ventilated Wallachia, because you will need a minimum of 1 – 3 hours depending on the level of difficulty in the first round. And then you can do it in for example 41 minutes skipping dialogues.

Phases divided into several sub-levels + Final Bosses. 4 -or 5 if you find an item- life points. 3 lives. You continue infinite. Like the Souls formula, inherited from the classics, or others like Cuphead, Wallachia proposes a very Contra-type 2D gameplay from Run ‘n Gun with enemies + platforms in which we will machine gun non-stop shooting arrows with the protagonist, as if we were the Elf of the mythical King of Dragons from Capcom. 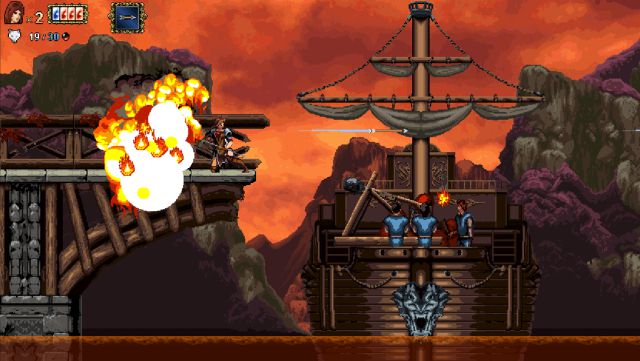 The bow and arrows will be the main weapon, with a fast standard shot and a stronger one that requires holding the button down for a few seconds. The test of the Contra touch is that we can shoot them in various directions – yes, even jump and shoot down if you’re crafty. And as a secondary weapon we have a sword that we will use both for enemies at short distances and to break enemy arrows in the purest ‘parry’ style – yes, the timing requires to be perfect to stop shooting with the bow, break the enemy arrow and re-shoot. We also have a very useful ‘dash’ slide for Final Bosses, but it can be activated accidentally when we crouch down to shoot.

The advantage is that weapons are leveling up to be more effective, while enemies will drop new types of ammunition in the form of more powerful arrows, fire or multiple. Along with this we have a system of four ‘helpers’, as temporary magics -very from the Shinobi saga this- that we can invoke. Each helper performs a different one, from a powerful vertical shot to invisibility, powering up weapons or raining fire throughout the level.

But the game restricts the use of these magic to a system of orbs, because to use them you need to collect orbs from fallen enemies, or from the birds that carry them in vessels that you must hit. And it restricts it because there is a certain imbalance in them that should be fixed, since it is one thing for them to be powerful, and another for them to drain half a bar of life from the Boss at once. 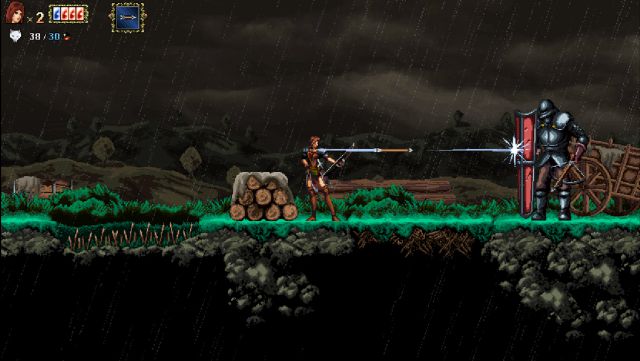 Wallachia shows his ‘sadistic’ side in the fact that by losing energy we can also lose orbs. And what is worse: if we die either in the middle of a level or by a final boss, we start having lost all the ‘loot’: the orbs, the ammo, the upgrades, EVERYTHING. The game has a checkpoint system, but if you are killed by a final boss after having passed the entire level, arriving with a lot of ammunition and orbs, you have to start at the checkpoint before it, which means arriving sometimes with what you are wearing, the Basic weapon without leveled, without extra ammo and without enough orbs to summon.

The levels are brief, but intense: Enemies everywhere, each with its own patterns; archers positioned to find your angle of strike; others that need several touches; Levels peppered with dangers such as Prince of Persia-style contextual traps. And then the Final Bosses, how careful: the first 2 are easy in terms of learning their patterns, but from level 3 they get smarter, with more complex patterns.

It is clear that Migami has looked for a difficulty and advances of a classic cut, although for those not used to this, Wallachia can be an uphill battle in this regard, especially the last two levels. It should be noted that once dead, the enemies do not reappear and therefore there is no infinite respawn of these as happens in other titles. 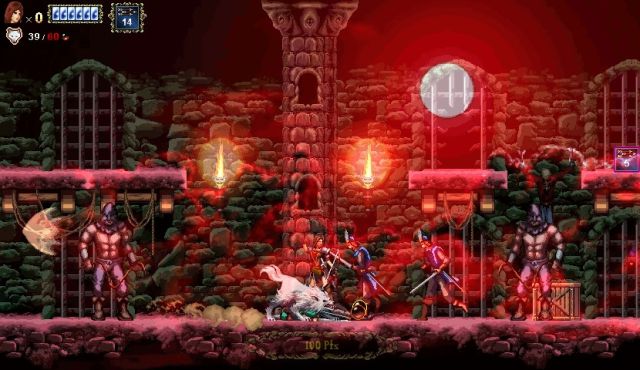 And also that the game lets you choose a level as you go through them, but definitely, Wallachia is difficult and more intended for lovers of this type of title than for a wider audience. In fact, if you choose the difficulty level ‘Easy’ from the menu, you will only be able to play part of the game before it asks you to switch to Normal or Hard mode.

As you progress through the Campaign, you unlock a series of extras. And when you finish it, there is more, like a sound menu to hear the OST, or a costume change that we will not reveal from whom, but which is another undisguised nod to recent Castlevania history. The best thing is that you also have a series of challenges to complete, such as breaking the rocks that fall from the sky before they destroy the wooden bridge you are on. Some challenges that add a little extra duration to the game. 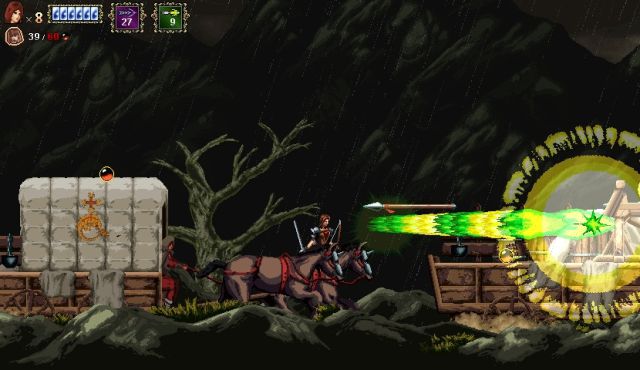 At a graphic level, the chosen style is the Pixel Art that we see so much in the indie proposals. There is no doubt that Megami knows how to imitate the 16 Bit style, because this Wallachia undoubtedly looks like on a visual level a Castlevania from the time of Super Nintendo, with some scenarios with its layers of backgrounds, classic parallax scrolling, and a great artistic design – those woods at dusk full of corpses impaled on pikes. The only thing that makes it look ugly are the comic-style cutscenes, a good narrative idea but poorly implemented.

At the sound level, the OST is very cool, as befits a title with these characteristics. Each level has its own theme, so you will hear different melodies within the same phase, whether they seek action or further reinforce the ‘creepy’ of the scenarios and enemies. But the best thing is to see how, despite being a low-budget indie, Wallachia surprises with a cast of voices that includes Kira Buckland, the 2B from NieR: Automata, and Robert Belgrade, the original Alucard from Castlevania: Symphony of the Night.

A title designed by fans of retro games with their community in mind, Wallachia Reign of Dracula is not a dish of taste for all users, because its difficulty can choke the uninitiated – something like Cuphead, but not as beast. But its proposal, with a Castlevania-like story and graphics and intense Run ‘n gun gameplay, make it an ideal title for those who miss what Konami seems to no longer want to give us.