You are here: Home / Preview / Watch Dogs: Legion, impressions. A London for everyone 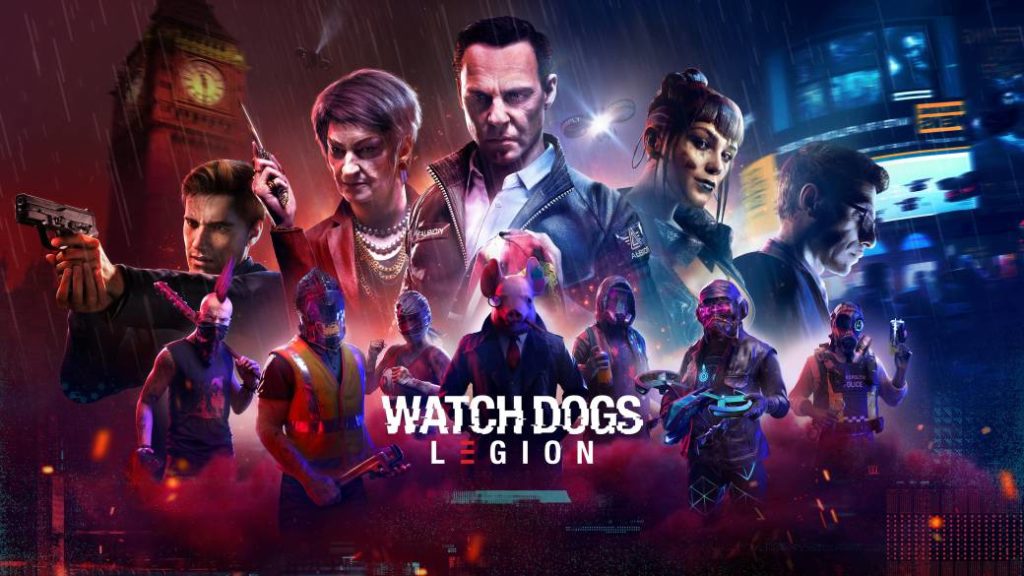 We sat for another four hours at the controls of Watch Dogs: Legion. We know your side activities and the way in which we will liberate London.

Fate has led the Watch Dogs franchise to be a kind of hinge of the current generation. We began the stage of PS4 and Xbox One with the first installment, a new IP that proposed to extend the interaction with the open world. No less than 6 years separate us from the misadventures of Aiden Pearce, a strip in which the playable formula itself has matured towards other directions. It is the game that we all knew back in 2014, but raised to the cube. It conveys the feeling of having met the objectives imposed from its origin.

Watch Dogs: Legion, on the other hand, closes it to make way for what is to come with PS5 and Xbox Series X | S. Last July we had the opportunity to sit for almost four hours in this portrait of London. The impressions had a common denominator: the recruiting system. Being able to experiment with the mechanics allowed us to confirm that the promises had finally been kept. Less than a month before its launch, we take over the controls again. This almost final build convinces.

The flame of revolution

We have spoken repeatedly about this portrait of London. Once the cultural epicenter of Europe, it has now become a reflection of the failed decisions of modern society. Technologies such as ctOS aimed to improve the quality of life in these unprecedented autonomous cities. However, it brought with it the opposite. We are not only talking about the loss of privacy, but about fundamental rights of any current democracy. 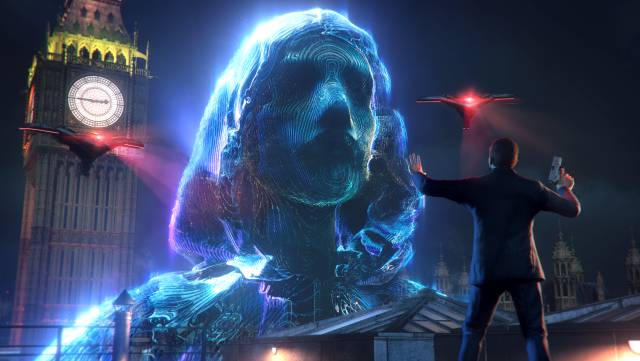 Following the trend, Watch Dogs: Legion raises a fictitious vision, yes, but at the same time not too far from what is to come. The strength of the automotive and autonomous locomotion marks a scenario headed for the socioeconomic crisis. The rich remain richer, and the poor poorer. The middle classes are blurred before the totalitarian regime of a handful of thinking minds.

In a situation of weakness, power is reclaimed by the forces of Albion, who turn Her Majesty’s streets into a state of siege. Its purpose is ironic. They raise their voices hiding behind security, in the duty to protect citizens against modern terrorism. A smokescreen that serves as a green light to corner arrests, random searches and deportations without distinction. Free will to violence. 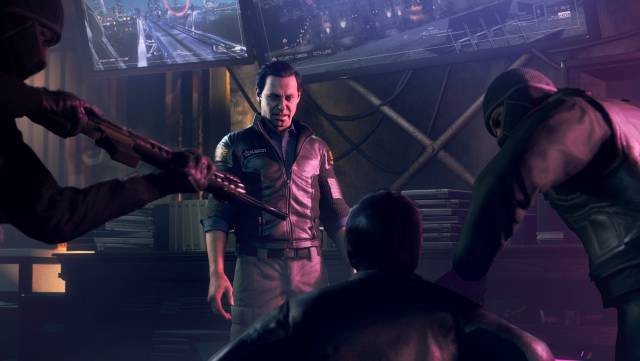 Albion’s forces have taken control of the streets.

London is everyone’s city. Anyone who has been there knows. And for this reason, the fight does not fall on the topical selection of charismatic faces, but on any nonconformist person. Each one has in their hands the power to turn the tables, no matter how small their contribution. In the previous impressions we talked to you in depth about this new Dedsec, the way in which we add manpower to such a company. What we needed to know was the other half, in what we can invest the muscle of the entity.

The open world follows a classic structure based on the liberation of districts. Through the completion of the related activities, we will decrease the influence of Albion. The missions maintain the power of decision that characterizes the saga: you can choose to enter by force, use gadgets from afar or seek a stealth infiltration. The truth is that the tests we had access to offered a good level in terms of design. We had to analyze the environment, look for weaknesses and choose an escape point in case of being detected. 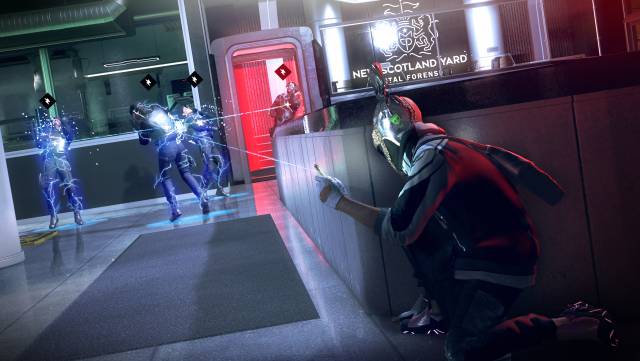 Take advantage of the opportunities that technology offers you.

And it is that in these four hours we barely pulled the trigger. Except for the plot parts due to script requirements, the other half of the experience is faithful to the definition of freedom. Once the force in a district has been appeased, that is, the objective marked on the map has been fulfilled, the final mission opens. These levels offer a mix of all the elements that shape the gameplay of Watch Dogs: Legion. In our case, we had to turn off the image of Albion in Big Ben. That led us to go through the security of the square, enter it, and use a spider robot to climb the clock’s gears. Suddenly, the title became a kind of casual 3D platformer. You can expect these kinds of gender changes at some points in the adventure.

These activities often go hand in hand with the nature of the characters. For example, on some occasions we were urged to go to a police station, either to free an inmate or to gather information. Due to the security of the venue we completely rule out direct action. If the police are already on our heels, it is even more so when you attack their headquarters. The game forces you to be creative to come up with a viable alternative. 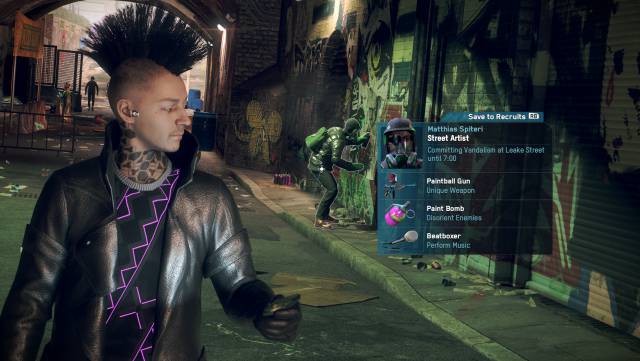 Having multiple roles in your group will allow you to have more infiltration opportunities.

The solution is very simple: to be part of them. Recruiting a policeman allows us to add to our ranks a character with the ability to dress in an officer’s outfit. Wearing it, you can enter areas under police influence without being detected. The infiltration in this sense is not total, since as happens in other franchises like Hitman, those who wear the same uniform can recognize the cover if we pass too close to them. In any case, the possibilities are multiple, since the number of uniforms is not exactly small.

We talked in previous trailers about the relevance of continuity in Watch Dogs: Legion. It is true: both because of the control scheme and in terms of possibilities, it is the formula already known to those who have passed through its predecessors. It’s not a bad thing per se, not at all. The studio wanted to build on a playable layer that works. 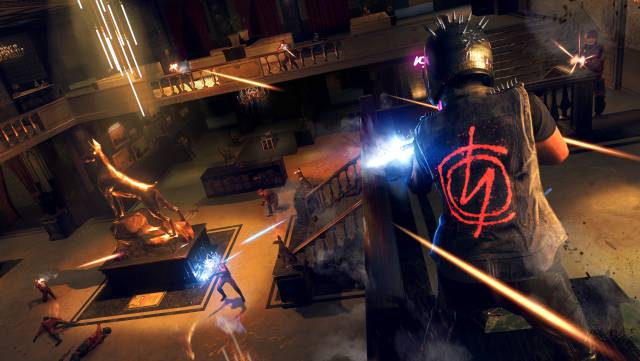 The playable sensations are similar to their predecessors.

Arcade, fast, agile… It’s what we’ve played in Chicago and San Francisco, only refined. What empowers the pack is the emphasis on scaling in diversity of situations. The way to spin those Ubisoft-branded moments remains intact. From the moment you turn on the game, you are introduced to a wheel of free content that does not stop spinning. The hours fly by without falling into boredom.

As he is familiar at the controls, he is also familiar with capturing the face of London. Although there is a certain interpretation of its own, the most famous locations in the historic center have been moved with precision. You can walk from Piccadilly Circus to Trafalgar Square only by being guided by the memories of the royal city. The simplification of its scale does not cloud an optimal result. 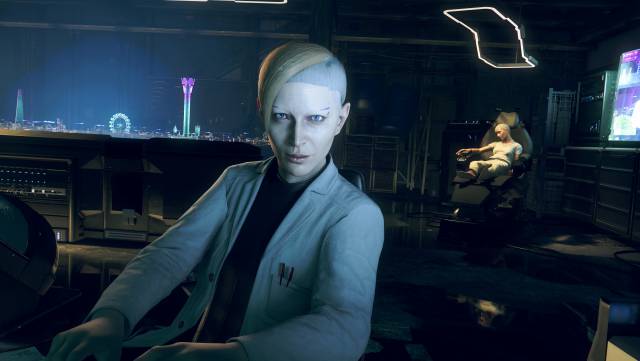 In the city there are multiple organizations in the shadows.

The build we had access to had ray tracing features enabled. Taking a car and seeing the buildings reflected on the roof is priceless. It manages to give visual depth, especially when the moon falls. At night the result is fantastic. You only need to be in front of the Thames to see the whole play of lights reflected in the water.

The prints are still on the positive side of the balance. Having been able to understand the two halves of the project, the overall feeling of these 8 hours is confidence. We commented on previous occasions that the brand began betting on a new way of interacting with the stage. Those primitive steps of the original have evolved 6 years later into an ambitious mechanic that keeps its promises, at least in these two sessions.

Watch Dogs: Legion will arrive on PS4, Xbox One, PC and Google Stadio on October 29. The next-generation version for PS5 and Xbox Series X | S will arrive alongside the launch of the consoles. Copies of current consoles will be upgraded to the following at no additional cost.