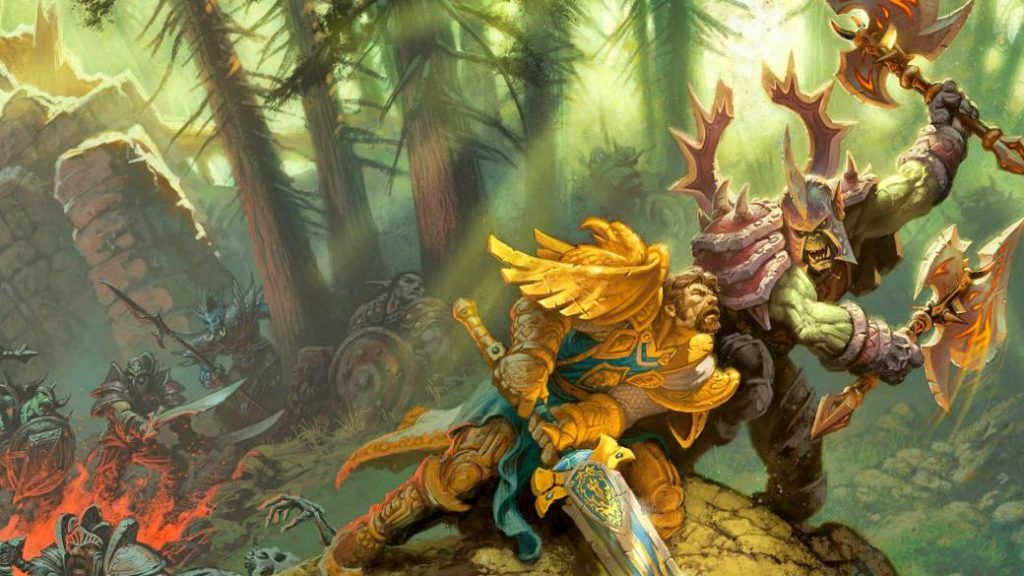 World of Warcraft: Classic is here. We tell you how our experience in old Azeroth that the community so much demanded is for the moment.

The seconds looked like minutes, minutes hours and hours whole days. We have had to wait more than a decade to walk again through that glorious and old Azeroth of fifteen years ago who enchanted us in World of Warcraft. The original game – or base – commonly called Vanilla was launched with the Classic label on August 27 and now, after two whole weeks of dangerous adventures we bring you a small preview of what awaits you if you plan to go back in time. 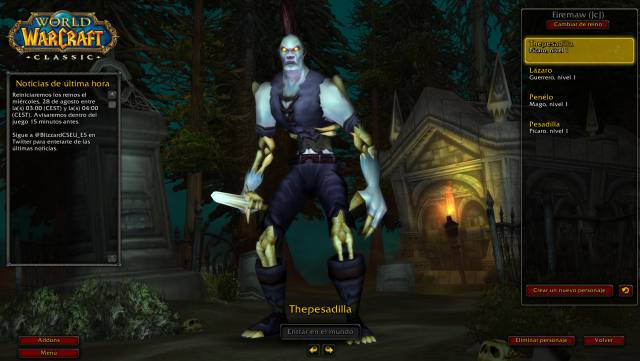 It is still too early to sentence with a number what we think of World of Warcraft: Classic, we have barely reached level 34 and the long waiting hours every time a player wants to connect to the game servers have made it impossible for us to have advanced We would have wanted. For this reason and because it is an extensive mmorpg full of content, we wanted to wait to offer you an in-depth videogame Reviews. All you should know, at the moment, is that the video game is practically the same as the one launched in 2004 but with some nuances, for example, that runs under the latest version of vanilla. This aspect of the title along with others will be treated in the corresponding Reviews.

Despite being enjoying our adventures in the regions of Azeroth, the truth is that it has not been easy to introduce ourselves into their world. Blizzard said that the bulk of European players were not large enough to open a lot of kingdoms to play from. Two player-to-player type, two focused on player against environment, one for role-playing and one for role-playing with PvP seemed sufficient for the Californian company. The German, French and Russian population had their own servers – two for each region – although once again it seemed to be a fair number according to previous calculations made by the company. All were theories.

The list of six English-speaking kingdoms has increased in number to reach the current 23 servers and the situation remains unsustainable. In order to play World of Warcraft: Classic without suffering the long waiting hours it is necessary to connect from 01:00 in the morning or early in the morning, otherwise we can be in front of the connection screen to the world around from six to ten hours watching the number of our place in the queue go down. Not even Blizzard's previous warnings that advised the creation of characters on other less populated servers have been effective because the recommended ones also “enjoy” a quite noticeable waiting list. And those who are not yet full, are about to find themselves in the same situation.

A few days ago the company located in California decided to open the migration service to less populated kingdoms and, although the queue has descended, it is still usual to see times of up to three hours to access the game world. The situation for Blizzard's is desperate. The reception that World of Warcraft: Classic has had throughout the world is such that it has broken all the expected numbers and has even placed in the top one in the Twitch streaming video service with more than one million viewers. 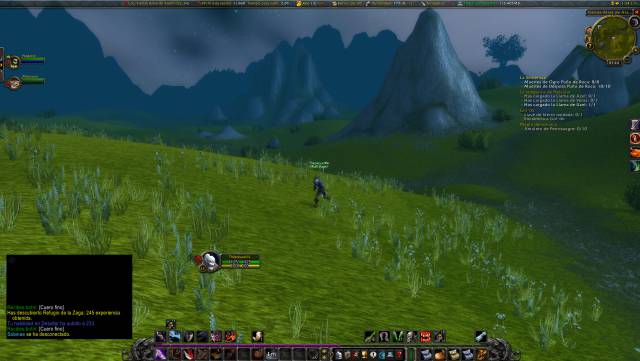 Another desperate situation is the one experienced with the layering or layering system. The simplest explanation of this feature is that there are different copies of Azeroth on each server. This prevents the agglomeration of players in critical areas that make it impossible to carry out missions or kill common objectives. It is a feature that did not exist in the original version that has more detractors than followers and that breaks with the Vanilla essence. However, it is a lesser evil — as you see it — necessary that Blizzard wishes to abolish in phase two of the six planned during the life of the title. However players are taking advantage of this system using it for their own benefit, for example, to collect rare items or to kill unique enemies. 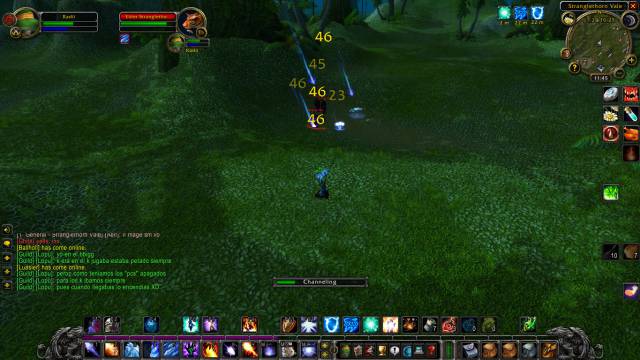 Another of the so-called uses of layering is to ask for a group invitation to change the layer and thus have the free map to perform missions to pleasure or to avoid being hunted by players from the opposite faction. This totally breaks the gaming experience that everyone, in theory, wanted, but now an important number of people use for their own benefit. Blizzard has made some adjustments to this layer system but although it has minimized slightly the problem is still there.

We return to Azeroth

Technical problems aside we must say that our gaming experience has been pleasant so far. Most of the World of Warcraft: Classic players are still wrapped in that Vanilla spirit we were all looking for and the succession of greetings, groups and mutual help is still valid fifteen years after the original release. It is usual to meet players who give you a selfless hand, apply beneficial states to your character because they do or tell their experiences in the General channel so that everyone can relate their own. Of course, the Barrens chat is again more active than ever and the best place to have maximum fun reading the traps that are told there. 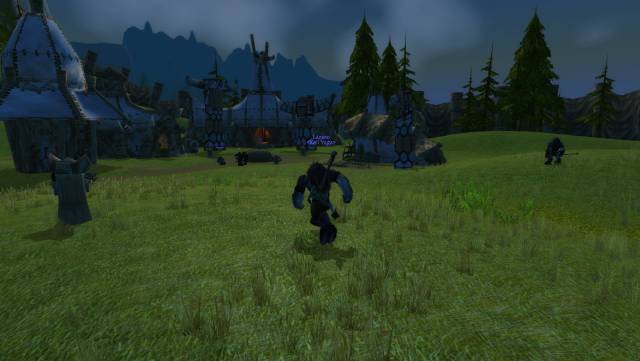 The gameplay of World of Warcraft: Classic and its mechanics are the same as those we saw in patch 1.12 that introduced the Naxxramas band dungeon but there are things that have been modified for a better gaming experience. For example, it is now possible to send emails to players with more than one object attached, something that did not happen at launch. There are also changes in the dispossession system and it is now possible to exchange an object of equipment obtained in dungeons with other members of the group for a short period of time. However, for what we have experienced during these two weeks this announced change we have not seen at any time for what we assume will be in band dungeons only.

Despite the layering system the world is alive, extremely alive. It is not strange to walk through any of the regions of Kalimdor or Eastern Kingdoms and meet players of both factions. The World PVP takes place in practically all of Azeroth but as always, the areas most given to it are the Trabalomas or Tuercespina slopes, emblematic places for those who enjoy fighting against those of the opposite faction. There is always an invitation to group to make the missions easier and that is something we missed. 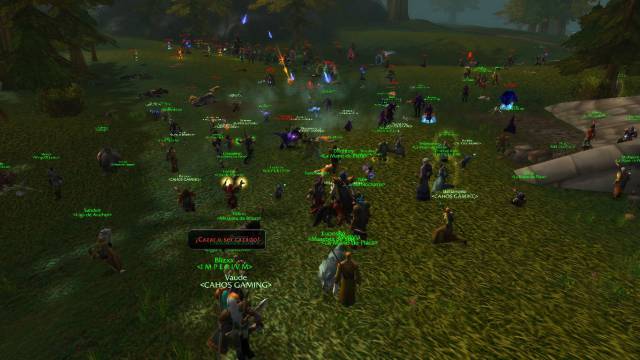 The original missions that disappeared with the passage of time return, we say goodbye to visual aids when collecting plants or mission objects, goodbye to the group seeker, to the invocation of members in the meeting stone, the class instructors return or the requirement to have certain keys to access places. Of course we return to greet the elite missions that require groups to carry them out, class or preparatory missions to access dungeons.

In addition, leaving aside the endless waiting hours to access the kingdom, the operation of the servers is impeccable, with little latency and no lag. Only performance problems were experienced in them a few days ago due to a denial of service attack – DOS – carried out by the UKDrillas group that mainly affected the American kingdoms. We have suffered to be able to play – for up to ten hours – and to stay connected without the servers throwing us out of the game but still and with everything, it was worth it. Welcome to the past!