You are here: Home / Preview / Scarlet Nexus; all about Bandai Namco’s new RPG 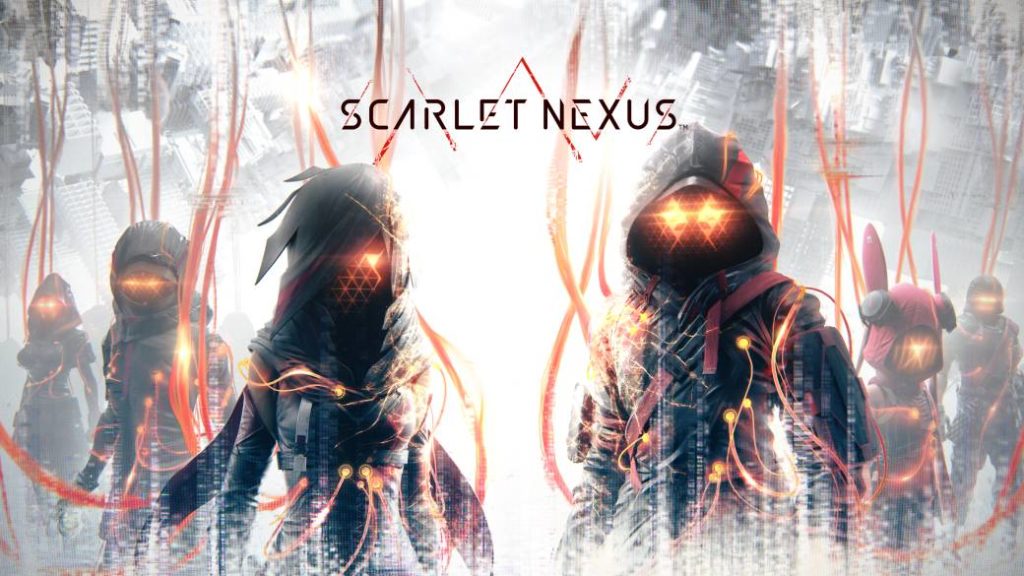 We bring you an exclusive interview with Keita Iizuka, producer, and Kenji Anabuki, director of Scarlet Nexus, in addition to detailing all the keys to the work.

Scarlet Nexus is Bandai Namco’s new proposal, which aims at the new generation by reaching both PC (Steam), PS4 and Xbox One as well as the new Sony (PlayStation 5) and Microsoft (Xbox Series X) consoles that will see the light at the end of this year 2020. In the framework of Gamescom we have been able to see a new gameplay of the action adventure with RPG touches that concerns us, which we proceed to reel step by step below. In addition, we have had the opportunity to interview Keita Iizuka, producer, and Kenji Anabuki, director of Scarlet Nexus so that they tell us in detail everything we need to know about the work they have in hand. We tell you.

The foundations of Scarlet Nexus; origin and development

Five years ago the idea for Scarlet Nexus was born and the director of the title tells us how Bandai Namco Studios approached them with the proposal: “The project started and I think Mr. Anabuki had an idea of ​​what he wanted to do and how to do it at that time. moment”. In this way, the game director himself explains that after being involved with the development of the Tales saga, the moment came when he and the developers of his company decided to do something new and challenging, so they organized as a new team quite suddenly: “At that time we started making prototypes for R&D purposes. It was exactly 4 years before the product took shape and when we showed it to Bandai Namco ”, explains Kenji Anabuki, director of Scarlet Nexus 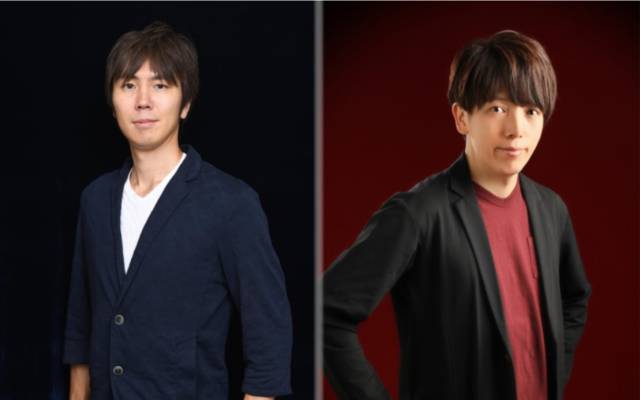 “Yes, I remember that at the beginning we were only 3 or 4 members working on it. Also, Mr. Ochiai joined the team when I asked him to do the art, ”Iizuka details in reference to Kouta Ochiai, art director of the title. “At first we only had the idea of ​​making a new RPG. We started planning everything from scratch and we didn’t even have a precise term for it, but we did what we saw fit to create something innovative and fresh, ”adds Ochiai.

The concept of Scarlet Nexus and its keys

As detailed when asking about the title of the work, Scarlet Nexus is made up of two concepts: “Scarlet”, which is linked to the color red and “Nexus”, which reflects the idea of ​​connection: “The visual expression of ‘ objects or people connected with red lines represent a large part of the visual elements and key art of the game “, details the producer, to which the director adds:” When the player gains power from his teammates we will see red tubes stuck in the back of our character ”. Regarding the vision from the art department, they explain to us that they wanted to show the concept of “kizuna” (links) in different ways. 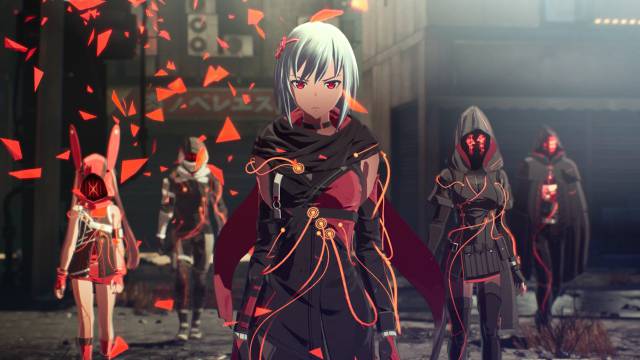 On the other hand, they detail the genre of the game as Brainpunk, since they assure that it contains the concept of punk, which reflects “rebellion against society” and Brain (brain) to refer to both the mental connections between characters and the telekinetic powers of those that the protagonist has and of which we will speak in greater depth below.

A strange but familiar world

The country that appears in Scarlet Nexus is called “New Himuka” and in it we find large cities such as Suoh or Seiran. On the other hand, they also have a “power of opposition or localization” called Togetsu. These will be the main locations that we can visit in the game, but it is not an open world, but interconnected areas that we can explore in each mission. Thus, we will visit a city full of futuristic elements mixed with a concept from the 90s. 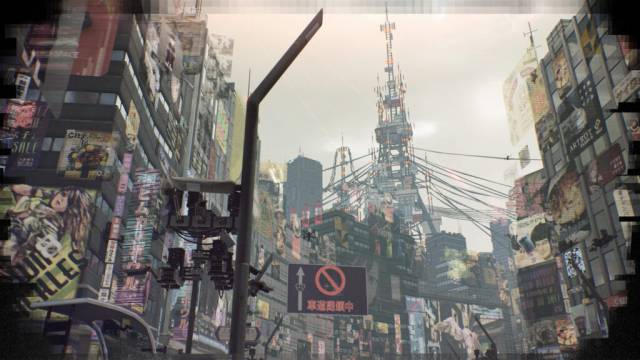 The story of the title is not set in a specific era, but the development team has taken various elements of the current era to give them a new layer of futuristic depth. For example, the producer of the title mentions that we currently use our voice to control devices, while in Scarlet Nexus the inhabitants of that world use their minds to interact with various items: “All humans are connected by a new service called Psynet” , something that will cause problems in the long run with the appearance of mysterious and terrible entities called “Others”.

The “Others” are mysterious beings that fall from the sky and directly injure the brains of humans. “You can compare them to earthquakes in Japan, since they are natural disasters that can happen at any time,” Anabuki details. For this reason, the inhabitants of the world of Scarlet Nexus developed tools to fight against them and live with the danger they pose. 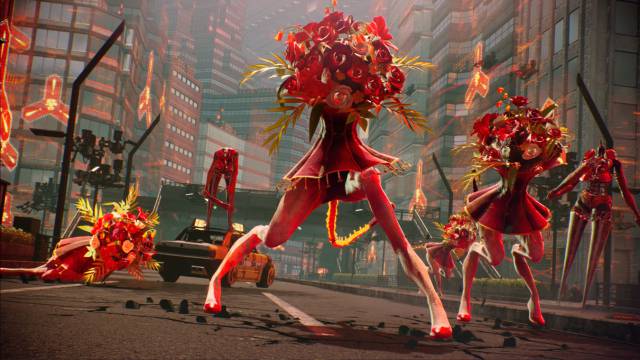 To create them, they wanted to do something different and the name of Masakazu Yamashiro ended up on the table, who worked with them to design different monsters with strange and grotesque elements mixed with other pleasant ones such as flowers. They used and mixed the concepts of “Death” and “Beauty” to design the Others and offer a sense of familiarity mixed with strangeness. Thus, we can enjoy special and distinctive designs as far as adversaries are concerned.

The protagonist and his story

The story begins from the point where Yuito Sumeragi intends to join the OSF forces, who protect the citizens from being attacked by the Others. We will have to accompany him on his personal journey to discover all the mysteries hidden in his past and repair his fragmented memories. “His family wanted him to become a bureaucrat or a politician, but he decided to join the OSF after being saved by one of its members during his childhood, when he was attacked by an entity of the Others,” Anabuki explains. 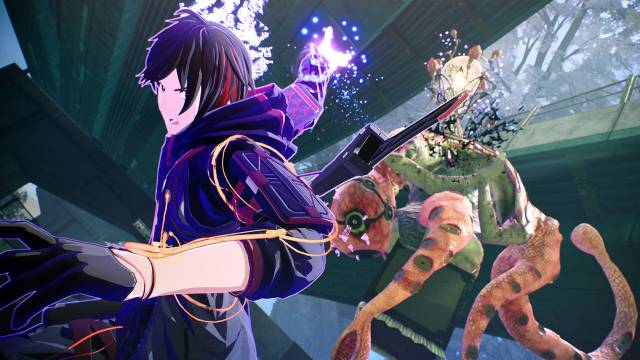 Despite the fact that his brain is connected to that of the rest of the teammates and therefore we can take their powers to fight, from Bandai they want to make sure that Scarlet Nexus transmits a different idea: “In a society in which everyone’s brains they are forcibly connected … that’s the real loneliness, ”says Iizuka.“ We want the players to think about these issues even though they are not the central ones in the story. About loneliness and what it means to be connected to others. “

As for the missions, there will be both main ones linked to the story and secondary ones and “Bond Episodes”, which will help us to strengthen our ties with the rest of the characters that Yuito will meet in his adventure. An example of this is Hanabi, who appears in the images that accompany this piece. She is the first partner we will meet and who will grant us the useful power of fire, in addition to a series of missions that will allow us to learn more about her personal plot. 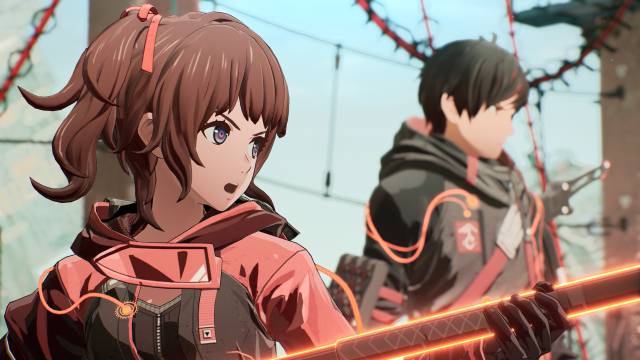 On the other hand, in the menu we can also consult the “Library”, where the “messages from the brain” await us, in order to know in greater detail everything that surrounds the missions and their particular stories. In addition, as in other titles of these characteristics, we can also consult various specific details of the main characters and the bestiary.

The protagonist uses a sword as a weapon, as well as “psychokinesis” in a combat system that presents a hack and slash style in semi-open scenarios in which varied enemies await us with very original designs. We can use the elements of the environment such as cars to launch them against our adversaries thanks to our mental powers, something that will open a new range of possibilities. 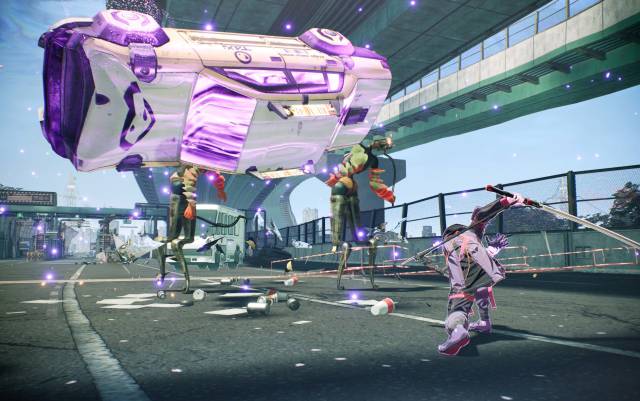 As for the development of these skills, we have the so-called “Brain Map” (Mind Map), in which we can improve various branches of attacks and Yuito’s attributes. On the one hand we have the Expand side, with examples such as enabling charge attacks, being able to add a shock wave to psychokinesis hits, expand the attack range or enable a combo of two attacks in the air. In the case of the Support branch, falling objects are automatically attracted to us or it allows us to enable the option to recover when attacked. Finally, thanks to Enhance we can slightly increase the damage of the weapon or of the objects that we throw.

In addition, in the game menu we also find the “SAS” tab, through which we can add improvements / prosthetics to the character himself and his skill levels. To understand each other, SAS is a brain-to-brain connection with virtual cables that allow us to temporarily use the powers of our allies. An example of this is the Pyrokinesis of our partner Hanabi, which allows us to use skills and fire powers that she lends us. For example, in the first level it serves to infuse our weapon with fire, while in the third level we reduce the cooling of our weapons and in other levels we can change certain details of our abilities or extend their effect. 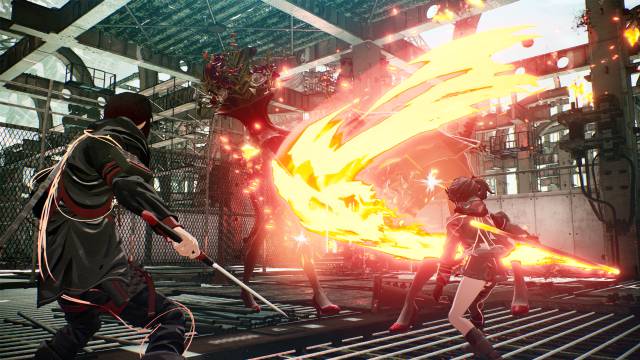 Graphic characteristics, technical and other details

As the director of Scarlet Nexus assures, the game is designed so that any type of player can enjoy it, so we will have the option to change the difficulty of the title at will between easy, normal and difficult at any time. Thus, those who seek a challenge will find it, while those who prefer to discover the story and reduce the danger of the fighting will also be able to do so.

Technically, they assure that it will run at 30 fps for the current generation with PS4 and Xbox One and for the new generation they aim to have a stable 60 fps and 4k resolution, the same that applies to the PC version (Steam) as long as our computer meets the requested requirements. To close the interview they leave us an interesting reflection and that is to ensure that “it has been a challenge to develop a version for both generations”, since each one has its own characteristics. What stands out about developing for PS5 and Xbox Series X is that: “especially for RPG games where we quickly switch between scenes, it feels great that the loading time is just a third of what we are used to so far, for which really expands our options ”.

We do not have a specific release date yet, so we will stay tuned for any news that adds to the extensive information we already know about the promising Scarlet Nexus.