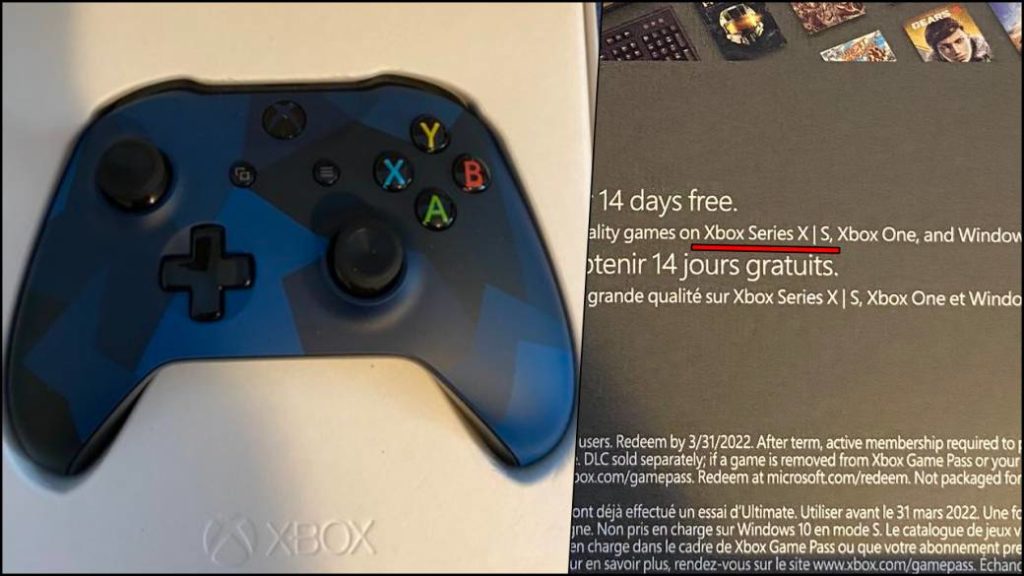 The possible alternative model to Xbox Series X is still not announced by Microsoft, but there are already several appointments to its name in official products.

Xbox Series S has been mentioned once again in an official Microsoft product. The one that is assumed to be a lower-performance model than Xbox Series X within the family of next-generation consoles from the North American company is now cited in an Xbox Game Pass Ultimate download card, as echoed by a North American user on his personal Twitter account.

The player, BraviaryBrendan in this social network, has bought a new blue Xbox Wirelles Controller and, as usual, there is a 14-day download code for Xbox Game Pass Ultimate, the premium mode of the game. Microsoft’s membership service that includes Xbox Live Gold. The surprise comes next: “Claim your free 14-day code. Includes Xbox Live Gold and Unlimited Access to Over 100 High-Quality Games on Xbox Series X | S, Xbox One and Windows 10 “.

I got a new controller for my Xbox since mine was broken. Interestingly enough, the Game Pass Ultimate trial code sheet mentions the unannounced @Xbox Series S. It’s definitely a thing. pic.twitter.com/GX1rOYG5g7

The way of citing it makes two things clear: the first, that this model, Xbox Series S, undoubtedly belongs to the Xbox Series X family of consoles; the second, that it is a console whose announcement is imminent, since Xbox Series X will go on sale in November.

This is not the first time we talk about Xbox Series S. Last August we echoed a similar circumstance; although even more strange. In that case, a player reported on Twitter that he had received at home a unit of the new controller that will go on sale this fall, the one that will come with Xbox Series X … but in white, a color range that is not yet available. has officially announced.

The product box also featured Xbox Series S alongside the Series X name. It is possible that this reduced-performance model was planned to be revealed sometime this summer, but its announcement was delayed for some reason. . Xbox made it clear that its Xbox 20/20 monthly ad plan was being canceled, so that August ads would be postponed until at least September.

Xbox Series X will go on sale in November at a price to be determined. The Xbox Series S announcement is similarly unknown.