You are here: Home / Demon's Souls / Demon’s Souls, PS5 First Impressions; So the World can be Mended 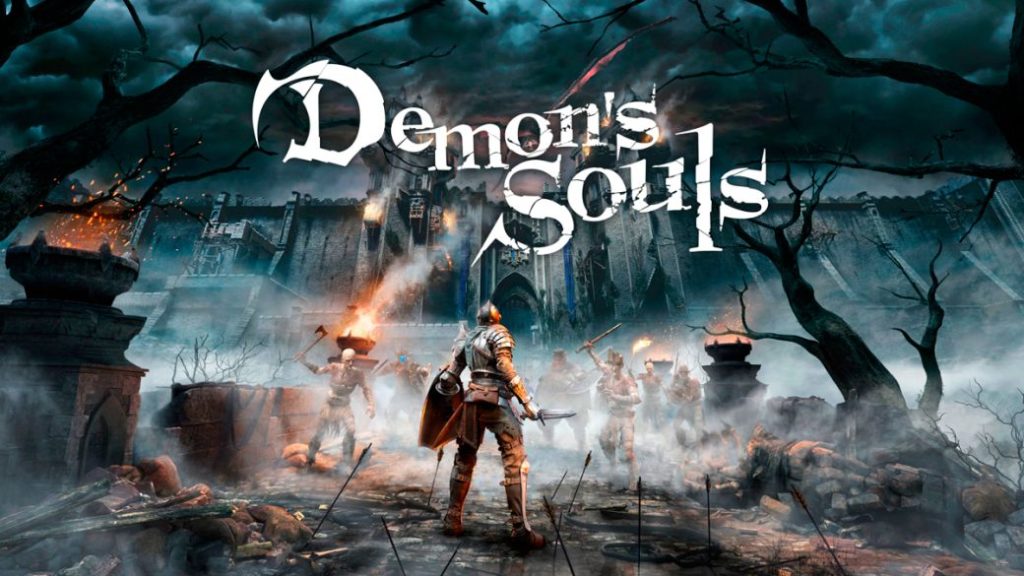 We played the first hours of the first great pure PS5 exclusive, a remake of the game that laid the foundations of what would become the Souls subgenre

In 2008, PS3 was going through a very delicate situation. After dominating the video game market without question with an undeniable PS2, Playstation 3 became the burning wings of the icarus Ken Kutaragi. The father of Playstation had overcome countless barriers and obstacles to get Sony to go from disinterest to domination of the video game market, so many that he felt invincible. But the launch of the third iteration of the console was a monumental fiasco that severely damaged the economy of the multinational; Each unit sold was a slab in the accounts, the scale that was tried to reach with the Cell technology to compensate the costs did not arrive and a steering wheel was necessary. Kutaragi retired and Kaz Hirai took over, and the company’s organizational chart was restructured to save PS3 and the Playstation brand itself (successfully, in the long run).

In the midst of such a complicated situation, Suhei Yoshida, ultimately responsible for Sony’s worldwide studios and one of the iconic figures in the Playstation family of recent years, made a mistake. At that moment of spinning especially fine with what to support or not internally in order to promote it around the world, he played an unfinished version of Demon’s Souls. After two hours he came to the conclusion that it was a horrible game, with very serious framerate problems, a frigid pace and no hope of becoming a success. The game was from an independent studio but closely linked to the Playstation label such as From Software, which had developed a long list of titles such as King’s Field or Armored Core. SCEJ honored its role as a distributor with a low-key launch in Japan and waived rights outside the country, leaving From free to find another distributor overseas, something that cost him quite a bit until a then-independent Atlus made up his mind. 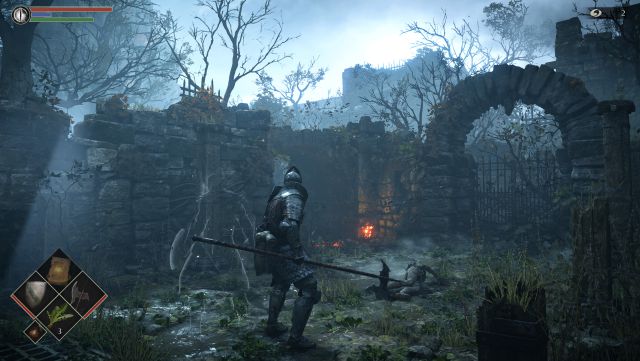 The rest is history. Demon’s Souls became a cult game that revolutionized the landscape with its tone, rhythm, structure, architecture and ideas, including a little less than revolutionary multiplayer that would open our eyes to new possibilities beyond playing with other people, a great example metanarrative and how to use the behavior of the players to give the world its own personality, and even to influence individual games. The creative foundations of this title would become the foundational foundations of Dark Souls under the Bandai Namco label, already as a multiplatform series. Yoshida stated that it was “one of his biggest mistakes”, one that he amended in part by signing Bloodborne exclusively with From Software, although there remains the question of what would have happened in a world where Demon’s Souls would have been a global success on Playstation 3 under the label. by SCE.

For all this it is curious that the new PS5 appears neither more nor less than with a remake of Demon’s Souls as a launch game. It is like a window to that world that could have been and surely the definitive vindication for the work that put Miyazaki on everyone’s mind, although at this point the director needs little vindication. Bluepoint, increasingly ambitious when it comes to planning their recreation work, dares with another sacred cow such as Shadow of the Colossus to present us with a beautiful recreation of the Boletaria rhenium. 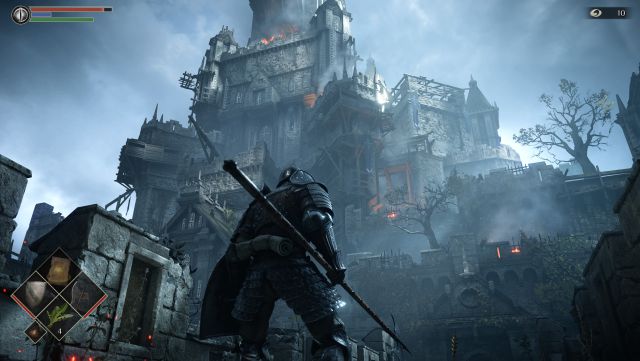 Demon’s Souls on PS5 is an exact recreation of the original game directed by Miyazaki. We are one of many warriors who has dared to break through the mist that separates the rest of the world from the great kingdom of Boletaria, now under a curse that threatens to sweep away all of humanity. Either by courage, by greed, or by power, we enter the remnants of the kingdom and are easy prey to the first great demon we meet, trapping our spirit in the nexus along with that of many other warriors. We will therefore need to collect souls to first recover our physical bodies and then become powerful enough to face the overwhelming threat that looms over humanity.

It has been more than a decade since the original was released. Souls are not games made to be scooped by the eyes, they can be aesthetically captivating and imaginative, but they don’t seek the obvious graphic show. The original Demon’s Souls was even more raw and spartan in its approach, with its desolate spaces and cyclopean ruins that revealed a glimpse of Boletaria’s glory. From Software had never been known at the time of the original game for making games that were pleasing to the eye, both the King’s Fields and the Armored Core were visually arid, unpleasant and focused on generating different sensations to the player than amazement.

That’s why it’s a bit shocking to take the first steps in this remake and find yourself such a visually luxurious game. It’s not that the depressing essence of the setting is altered, the setting is really successful, just that the first impression is more shocking and obvious to the eyes than we are used to in a From game. The detail of the rock on the walls, the way in which the light enters the stage, the shine of the armor of our protagonist or the detail of statues and buildings that we find in our path. Everything has gone through a notorious layer of definition that not only elevates the pure and hard graphics of the game, it also shows us a little more clearly what is going on in this new generation. 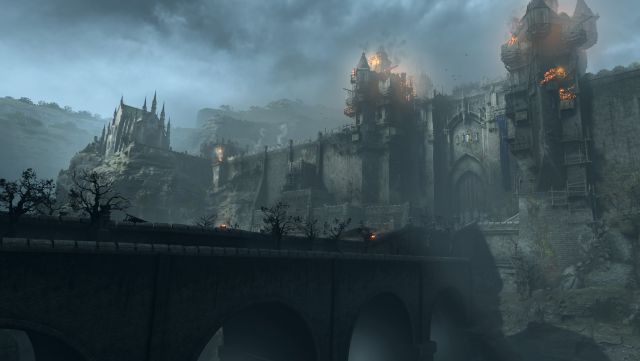 Like Miles Morales, Demon’s Souls comes in two graphic modes: cinematic and performance, although the differences here are not as clear as in Insomniac’s game. On paper we have a performance mode that works at 60 FPS with a “rebuilt” 4K, and a cinematic mode at 30 FPS and 4K with visual extras. But when push comes to shove, we find that Bluepoint has struck a good compromise between the two modes. The 4K reconstruction of the performance mode is magnificent, leaving a really remarkable image quality and that you have to look closely to appreciate. This is not like the Insomniac game, where the graphically more attractive mode has the important addition of Ray Tracing for reflections. This technique is not incorporated here nor does it offer something so showy, so without a doubt we will stick with the performance mode to enjoy it at 60 FPS. As a note, in the options menu there are some curious options such as activating a grainy graphic mode and various filters, in case we want to give a particular air to our passage through Boletaria.

Enjoying Demon’s Soul at a stable 60 FPS is a great pleasure and it also has a real effect on our character control, which we especially notice when executing parrys and moving around enemies to look for the satisfying blow to the back. There is another technical element that also has an important impact on our gaming experience. Every time we died in the original game, about two minutes of loading awaited us – we already had the image of The Monumental stuck in our hearts – and since we died (a lot), sometimes it was an exercise in patience and introspection. With PS5 the loads are practically immediate, just a few seconds to start the game and snapshots to start over at the locations of the archstones, which is an improvement almost as significant as the graphical renovation itself. 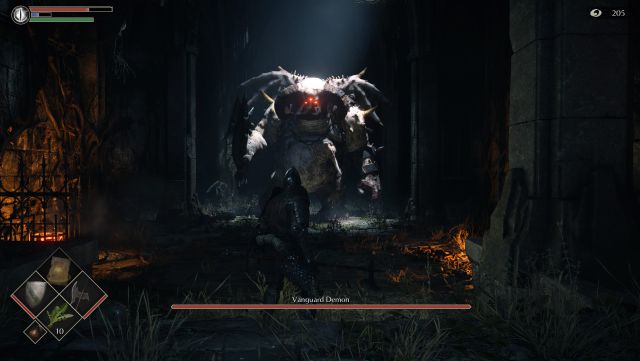 On our aesthetic impressions, we are certainly at a game with a very high degree of detail, impressive. There are certain moments, such as when we land for the first time in the nexus, which impresses us with the detail of the walls and ceilings, the engravings on the walls and the atmosphere generated by the dim lights of the candles. There is a powerful sense of being in a sacred place, and it visually evokes the idea of ​​being before the last dim flame of hope for Boletaria. However, sometimes a certain feeling invades us (somewhat absurd), that some aspects are a little too beautiful for the world and what it is; that the armor is too shiny and too perfect, that the stage is too clean and resplendent. As if by incorporating spectacular graphics, a point of unease generated by the original had been lost. It is still a very purist and personal impression, surely clouded by the passage of time, and it does not tarnish the great graphic work done by the team.

The sensations with the combat are very well captured compared to the original. We once again have the same preset classes, which form the basis on which to mold our character and our build. The weapons will collide with the walls if we are careless and at all times we must control our fatigue when blocking or dodging to make sure we do not get thrown at the worst moment. The team has not left an iota of the original mold, so we find ourselves once again a game that mercilessly punishes mistakes but becomes extremely satisfying once we overcome the challenges. 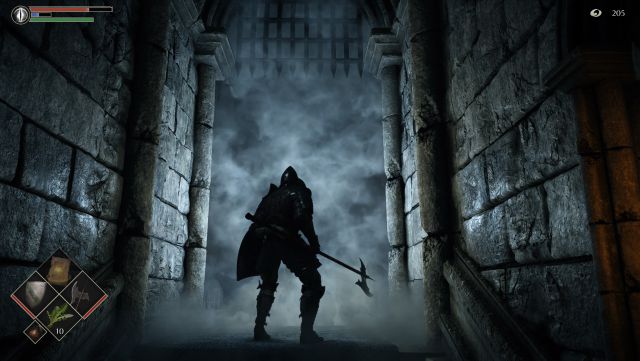 Perhaps one of the reasons we are most happy to see a Demon’s Souls remake is the recovery of its trending system and multiplayer elements, something that was lost forever in the original game. The cooperative works as before, using the blue stones to request other players to help you or activating the summon points to travel to other games. Bluepoint has incorporated its own touch in the form of an optional password system, to ensure that if you want to play with a specific friend you can do so, allowing only the pass to whoever shares the key, a small concession. The system of blue ghosts and dark ghosts is maintained, so when playing online we must be extra careful in human form, in order to monitor other players’ attempts to end your life. The interactions of the players, both cooperative and competitive, will be marked in the trend of the world, which will affect the behavior and difficulty of the enemies.

We will have a proper Reviews in the future, analyzing in detail the strengths and weaknesses of the recreation that the studio has done, but we can say that the initial impressions are excellent. The game is visually a real treat – the best next-generation demo of this first batch of mostly intergenerational titles. The taste with which scenarios and enemies have been recreated, the degree of detail that we see around us, the ambient lighting … everything is at a magnificent level, which together with the comforts of the SSD disk offers us a clear example of the point of starting with which we must begin to evaluate the capabilities of the new Playstation. Offering all this around such an iconic game, restoring facets that seemed lost as its revolutionary multiplayer, reinforces the idea that Sony has nailed it by offering this remake as part of its initial catalog for its new console.