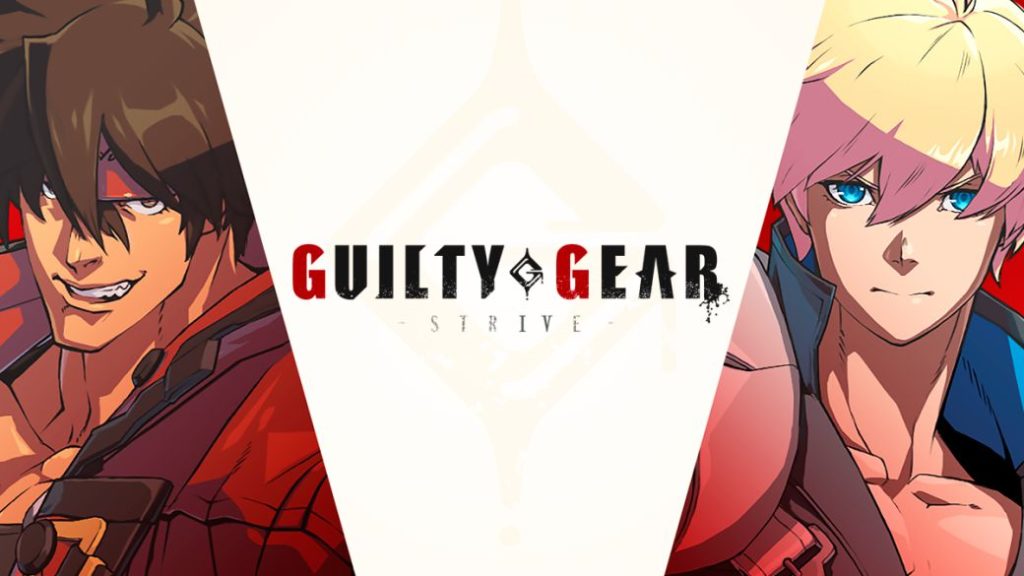 You may like more or less the game mechanics of ArcSystemWorks, the hud and the lobby, but its rollback system to end online lag is simply differential.

The first of the Guilty Gear Strive betas left a lot of doubts. It was the return of one of those mythical sagas that has always had a prominent place among the most hardcore user in the world of fighting games. The saga was being somewhat forgotten with the emergence of BlazBlue in the past generation and, despite getting a great game like Xrd and its derivatives, it was others who took the glory. But Strive has made a strong comeback with the current beta, available for a few more days, and it has done so for several reasons. Of course, the main one is the netcode. The present and future of online gaming in the genre is here.

There are several reasons that have led us to think that what we had was not enough for more. On the one hand, a core community that focused its efforts on face-to-face events and face-to-face tournaments. The essence of the FGC was in those places, and that was precisely one of the successes of the ‘boom’ of the genre that has been experienced in Spain with Dragon Ball FighterZ. But the pandemic arrived and they forced us to always play online, even if we didn’t want to. And there the problems surfaced. Capcom canceling tournaments because of poor netcode. Bandai Namco limiting regional fighting for the same reason. Was that really the only solution for the classics of Japanese 2D fighting? 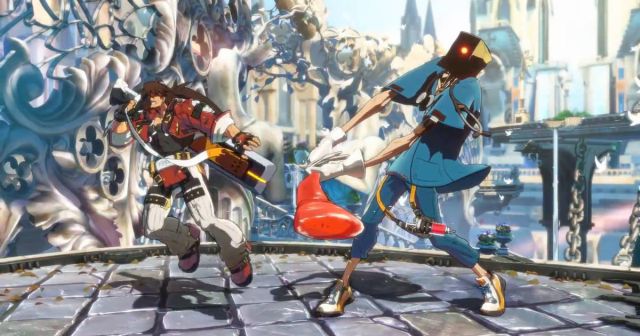 Many of us think, and with good reason, that this would wake up companies, especially the Japanese. At this point, NetherRealm has already proven to be steps forward. The network problems in the two most important games of this era of 2D fighting (Street Fighter V, which has improved over time, it must be clarified; and FighterZ) were not worthy of the sales or the expectations of the players. Not to mention Smash Bros. Ultimate, of course. And ArcSystemWorks has put all the meat on the grill with Guilty Gear Strive. Rollback, a system that has proven to work like a charm through the GGPO middleware, allowed us to play classics of the genre online without lag.

The Japanese company got down to work with it, and instead of using GGPO as an intermediary to offer a decent online experience, they have created their own rollback system from scratch adapted to the needs and particularities of Guilty Gear Strive. The result: a beta that when you are playing on the ring, leaves you surprised. There is no lag, no downtime, the game compensates for any ping issues on the fly to make the experience smooth and satisfying. It looks like witchcraft. But in reality it is neither magic nor should it be an exception: it is what we should always have demanded of the greats of the genre.

It is not easy to explain the rollback system and how it affects, but there are some videos (like the one you see below) that define it. It should also be noted that if there are bad connections, there will be no miracles but it always helps to make everything much more stable. And the Guilty Gear Strive beta has been a great example of this. And a turning point: without such a system, any game, no matter how big its name, will have to be penalized significantly.

If we delve into what the game itself offers us, we find a beta that improves the benefits we saw at the time and that polishes several mechanics. It is true that it is still a modern game, so many of the peculiarities of the saga of yesteryear have been simplified, but it comes with a very interesting base. For those who do not know, Guilty Gear Strive offers a combat system with five main actions: punch button, kick, special button, strong blow and Dust.

All of them allow us to make different combos according to each character, but with a variant that defines everything: the Roman Cancel. It is a key mechanic in the saga that allows us to cancel our movements in order to follow-up and perform combos that would be simply impossible. With the Roman Cancel, for example, we can make a sweep with Ky Kiske, activate the RC and then, be able to continue with new blows and specials, something that would be impossible without this mechanic because said sweep causes knockdown to the opponent. In this sense, it is important to note that the Roman Cancel has different properties. 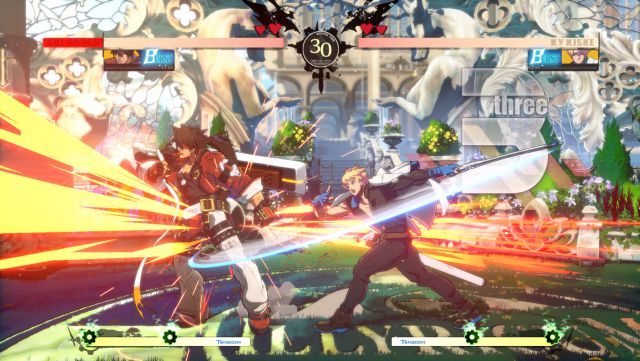 The first and main one is the aforementioned, cancel any hit with a 50% tension bar to follow a combo. In other cases, it can be used to slow the enemy if we are not hitting and activate it, as well as a reaction mechanic: if it is activated while finishing an attack or before hitting, we can remove the recovery of the blow and make another immediately after, thus surprising the rival. Finally, it helps us to remove the rival from their pressure if we are blocking. Managing the tension bar, of course, is everything in this system.

It is not the only thing that makes the title special, since we find the Dust button that allows us to perform a universal overhead (therefore, it impacts if the opponent is crouched) that can continue with a huge jump into the air and several blows before returning to the ground. The same button allows to make a sweep that causes fall in the rival. All this provides different attack options to be able to surprise the enemy beyond the traditional combos.

In addition, we have a good list of locking systems. In addition to covering ourselves, we have an instant block that allows us to stay close to our rival and punish more easily, as well as gain tension bar; or Fautless Defense, which allows, when blocking by pressing two buttons, generate a barrier that will prevent damage even if we cover ourselves (chip damage) in exchange for spending a bar. All this, along with the grabs (also in the air), the double jump, the burst to get rid of a combo in exchange for its bar, a corner breaking system in which we can nail the enemy to the wall and continue sending him to another area of ​​the stage, they complete the foundations of a game that simplifies the mechanics of the previous Xrd (there is no blitz attack or blitz shield, among other features) but that offers enough elements to attract a lot of attention. 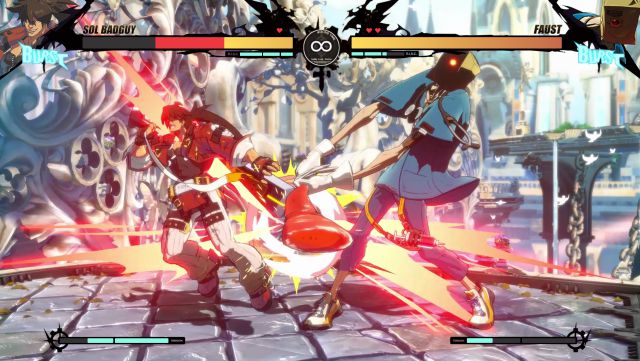 All this, naturally, with a series of characters differentiated from each other in a surprising way. Ky and Sol being surely two of the most chosen starting options, we find a varied squad that goes from Chipp’s speed to Faust’s long-distance and unpredictable game, Potemkin’s deadly grabs and many others with which, to To be honest, we still haven’t been able to dig deep enough.

Guilty Gear Strive comes in and very well through the eyes. The visual style with a spectacular character design, careful animations and scenes full of details make it a visual spectacle, although it is also true that at the hud level it has room for improvement. It already happened in the previous beta, and here we continue to notice that there are several effects -such as the combo count that is enlarged- that can mislead you from the combat, somewhat confusing what we see on the screen. It is a minor detail, which you get used to, but it is true that it has somewhat invasive moments. Along with this, we have been able to revisit the pixelated and 2D lobby again to find combats, divided by plants according to your level and which is still not very intuitive. Another minor factor, since the important thing is to be able to fight and do it well, but it would not hurt to rethink. 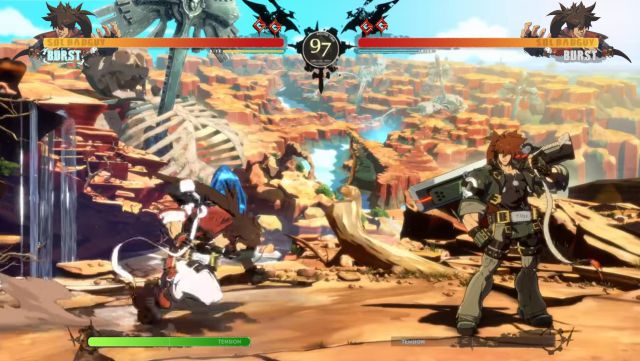 At the moment we have seen the modes, but we have not tested them because they are not active. For a player we have the Arcade, vs CPU and survival, the Dojo with the tutorial, missions and full training mode and brand of the house; online combat with leaderboards and quick start and a story mode and a glossary of the Guilty Gear world that we know nothing about to date. It will be in April when Guilty Gear Strive goes on sale for PS4, PS5 and PC and when we will be able to assess in depth everything it offers at the level of mechanics, modalities and performance. But we are clear that the future of 2D fighting games is marked with a before and after with respect to the online system that AWS presents in its new title. And we can say it clearly: it was about time.