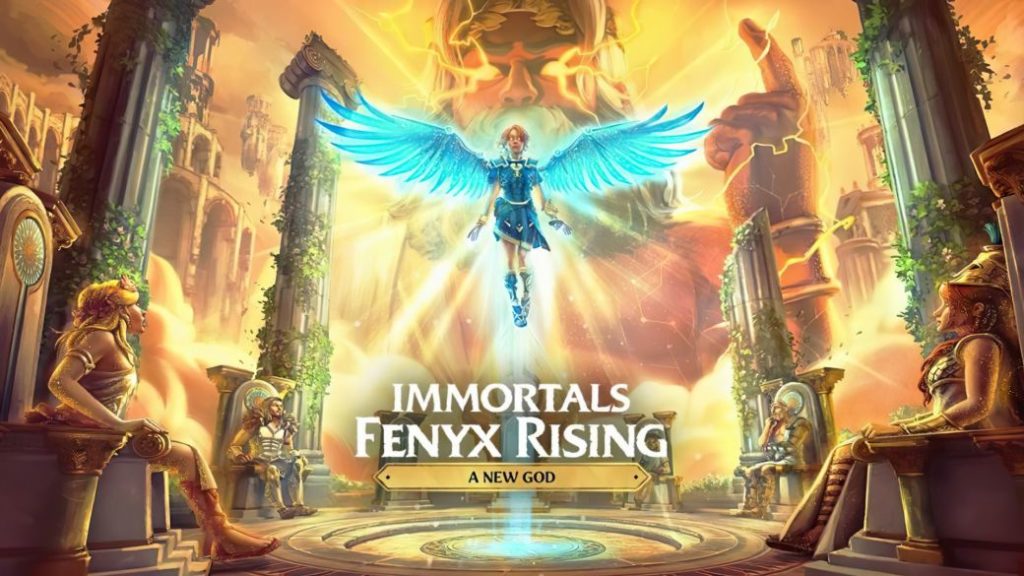 The Pantheon of the Gods has a vacant position and Fenyx wants to fill it, but for this he will have to overcome tough tests.

Ubisoft Quebec, the authors of Assassin’s Creed Odyssey, surprised with one of the most interesting titles of 2020. Immortals Fenyx Rising managed to combine some mechanics from The Legend of Zelda: Breath of the Wild with other aspects taken and adapted directly from their previous project. Far from being blurred like a badly infused copy, the Canadian studio knew how to build a product with its own identity. Just two months after its arrival on the market, the developer has released A New God, the first expansion DLC, which is part of the season pass. In FreeGameTips we have played it in depth and we tell you our final impressions.

The content is not available within the main game, instead Ubisoft has chosen to separate it within the menu. Of course, the user has the option of moving their save game to maintain progression and cosmetic modifications. It should be noted, however, that the game itself improves health and stamina attributes so that the difficulty is well leveled (and in this title the jumps and flight are more demanding than before). It goes without saying that it is advisable to have completed the previous adventure, as this story takes place just after the events narrated in the base game. Therefore, the general context of the argument will also be drawn in the text. Be careful, spoils are coming. 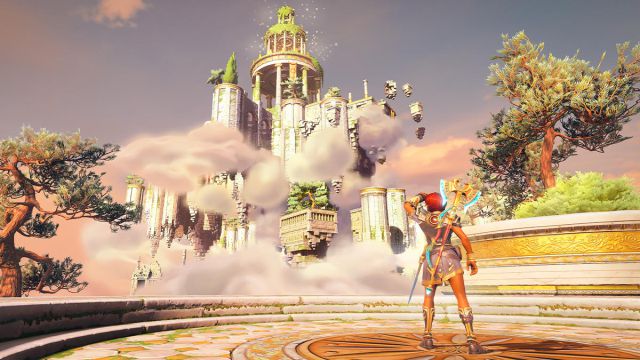 A vacancy on Olympus

In Immortals Fenyx Rising, the gods had succumbed to the evil Typhon. Desperate, Zeus enlists the help of Prometheus, the titan who gave fire to mortals and was punished by the father of divinities. His recommendation is that you put all your hopes in the hands of a mortal (or a mortal, because it is possible to choose the gender). Fenyx, the brother of a great Greek hero, may also have warrior wood, and boy does he have it! What he does not know is the identity of his father, a detail that is discovered at the end of the game. It turns out that he is not even a mortal, but is part of the family of deities.

A new God starts from that premise. Fenyx is no longer in the Hellenic world that we traveled in the original title, but travels to the Pantheon with one goal on the horizon: to get a chair on Olympus. However, it is not enough for the blood of Zeus to run through the hero’s veins, as all candidates must pass the harsh tests imposed by the gods themselves. Fenyx lands with her wings high and with a firm commitment to succeed. 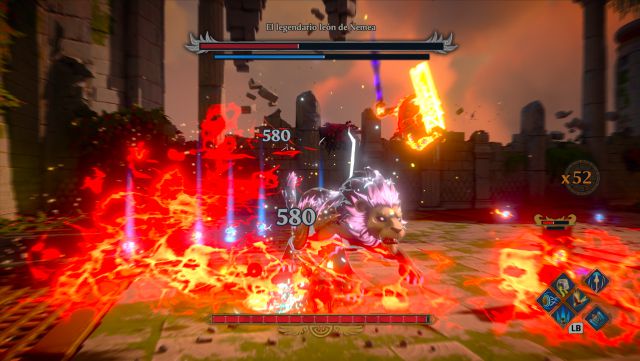 This proposal follows the guidelines of the main title, so that the irreverent narrative with a little point of satire continues to star in the lines of dialogue of the different characters. Not all gags are fun, but the experience is enjoyable. Although the story has its weight, the DLC relies more on its playable side, which not only maintains the level, but offers an even greater level of challenge.

The expansion is structured around the different tests of the gods, all of them designed so that a linear order is not followed. That is, instead of being able to perform the challenges of each of the divinities consecutively, Ubisoft has decided to opt for a progress that invites the user to alternate between the different types of challenges. New skills will have to be unlocked and riddles to be solved to gain access to some trials. How could it be otherwise, in addition to the main missions, we can also enjoy other extra content, which complete a product of a not inconsiderable duration. We could almost say that it is a kind of sequel. 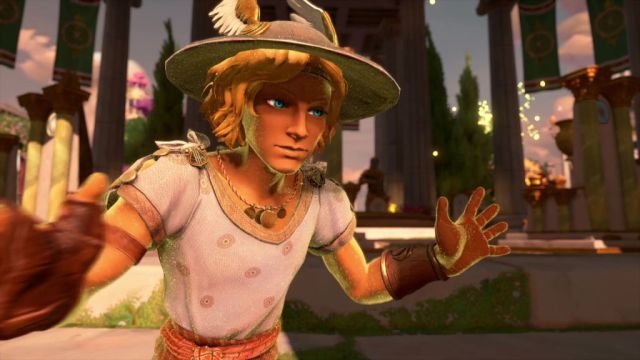 Each test has been designed with a type of puzzle in mind, which is captured in large scenarios separated into sections. This means that to advance in the test you will have to complete puzzle areas that open, in turn, the way to the final reward, a treasure that gives us an ability, an object or materials. As if that weren’t enough, they have implemented optional puzzles, so they have also hidden hidden chests with weapons and other pieces of equipment.

In Immortals Fenyx Rising, the puzzles were balanced so that they were not frustrating, but at the same time, Ubisoft Quebec made the difficulty level challenging enough for the player to have to think about their next moves. A new God assumes that the user has learned from the previous experience, has gone through the difficulty curve until reaching the sky of Olympus. And there the tests are also tougher, something that is reflected in the complexity of the puzzles. All the elements that we find in the original video game have been incorporated into this adventure, but the team has implemented several types of new puzzles. For example, certain poles electrify boxes, which we must use to inject power to other boxes and receivers. When all of them sizzle and receive the energy flow the door at the bottom opens.

In this production, previous elements are reused, although the study surprises us with twists of the screw, since they introduce some fresh novelties to the equation. Moving rocks was something we did before, but now we can use teleportation portals in specific puzzles, which implements new options to solve them. And this is just one example of the playable news. 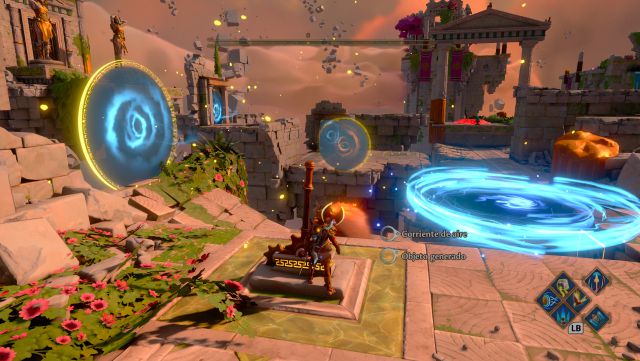 The negative point is marked by the erratic behavior of the physicists under what circumstances. It has happened to us that knowing exactly what we had to do, moving an object from one side to the other ends up being a small headache, because the object in question acts in a capricious way and after falling it bounces and falls into the abyss, with the inconvenience of being forced to repeat a tedious process. We get the impression that the luck factor operates in these circumstances.

Despite the fact that the puzzles are almost absolute protagonists, the combat returns with the same mechanics and with more final bosses. Strong and weak blows handled with the triggers are mixed with defense and dash movements, as well as special abilities. More of the same, yes, but tremendously trained. The same goes for flying and jumping, only this time precision is more necessary than ever. 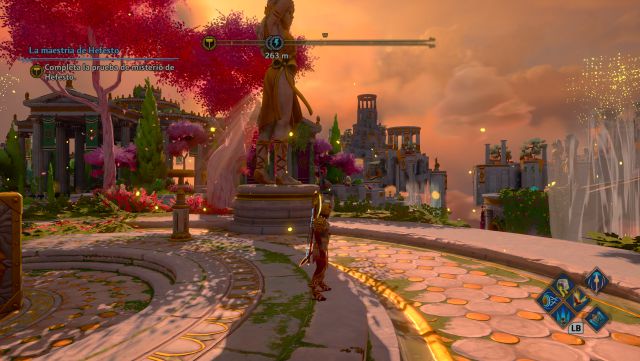 Immortals Fenyx Rising: A New God is a product that lives up to the main game. It provides hours of gameplay and challenges, setting the stage for the other two DLC content that will be part of the Season Pass. Myths of the Eastern Kingdom will be set in China and will introduce a new hero, while The Lost Gods will put us in the shoes of Ash. Unlike the other two DLCs, Ubisoft will add substantial changes to the gameplay, which will result in a revamped combat system.

If you enjoyed the proposal and want to continue exploring this classic Greece full of humor, A New God combines all these ingredients and presents them in a dish worthy of the best palates. But only if you pass the tests will you be able to sit at the table with the other divinities.

We have played the Xbox Series X version.