You are here: Home / Electronics Arts / The Sims 4, Star Wars: Journey to Batuu, all the details of the new game pack 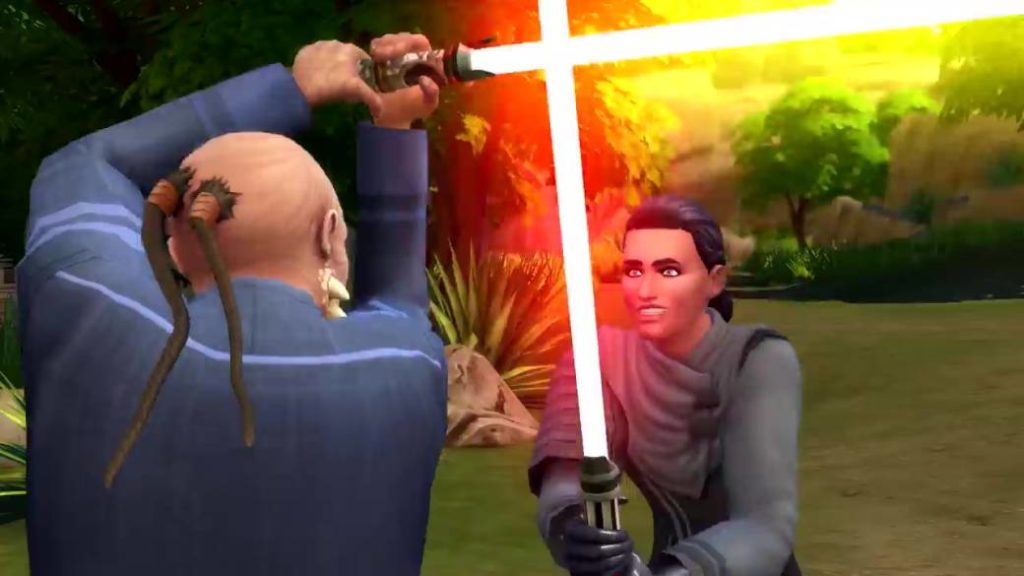 With 20 years as a franchise and more than 30 million players worldwide on all platforms, The Sims comes with a Game Pack that will undoubtedly drive everyone in its community crazy and will definitely attract new curious or fans of the saga, already that starting on September 8, Star Wars: Journey to Batuu will arrive in The Sims 4 on PC, PlayStation 4 and Xbox One.

It is not the first time that content from the saga has arrived in this video game, since in 2016 they had free costumes such as the pilot suit of Luke Skywalker, Darth Vader, Yoda and Leia.

This update that will cost $ 19.00 and will be an expansion that will emulate a kind of vacation in the game to the world of Batuu, a place inspired by the Galaxy Edge of Disneyland and Disney World that will have 3 different neighborhoods.

In this we can have all the experience of this thematic attraction of the popular amusement park, so that we can create our own story within the Star Wars universe. There will also be the possibility of interacting with characters from the saga, making us souvenirs and building our own android or lightsaber.

The way to access this content will be from the menu within the game on the cell phone and it will appear within the option to take vacations. One of the variants that we will have is to be able to select in the character creation menu, part of the aspirations within the theme park, either Hope vs Order, which is more focused on knowing everything behind the resistance against the first order or Galactic Privateer a sort of neutral point. 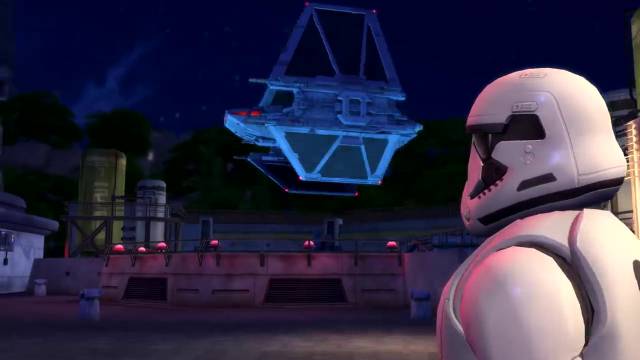 As in the core of the game, we will have needs for entertainment, hunger, hygiene, social, energy etc. Although it is important to note that the interactions we have will determine our reputation with the first order, the resistance or we can simply remain neutral.

Something important to consider is that within this pack, there will be different costumes from the Star Wars universe and you can create up to 5 combinations. These will be unlocked as you progress within the reputation indicators and will be linked to the faction you develop.

The food for its part, as well as the drinks, are also inspired by the Star Wars universe. 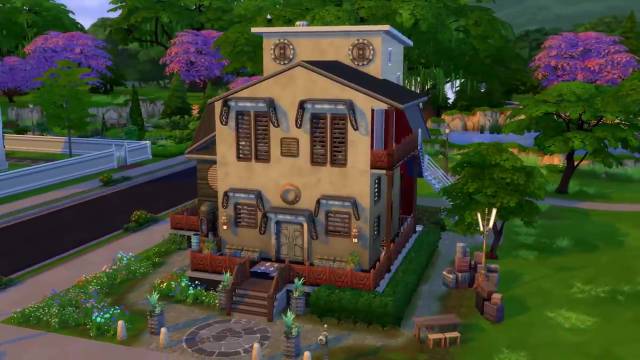 Within this park the missions will be carried out having conversations with NPCs and in the same way there will be interactions with characters such as Rey, Kylo Ren among others. If we feel lost, we can use the icons that point to a certain faction to guide the conversation and thus be able to access the tasks.

All this will give us intergalactic credits, which will be used for different activities and objects within the pack itself.

Obviously lightsaber fights will be present, either as training or as part of missions. 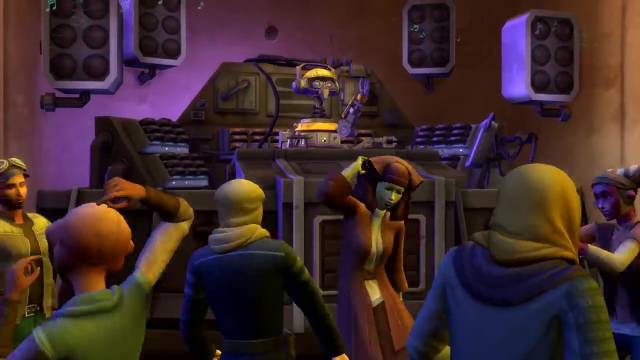 And to go deeper into what this pack offers, we had a remote chat with Antonio Romero, production leader. In this we asked the following questions:

This pack is based on which of the 3 trilogies?

AR: It’s based on the last one with some easter eggs from the originals like the Jawas costumes.

Can we use force?

AR: The Sims do not have as such use of force, but if you see how Rey can do the classic Jedi mind trick with the Sims or Kylo Ren using force to intimidate others. 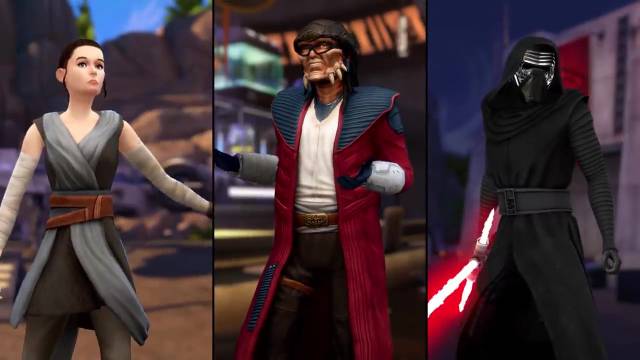 Are there souvenirs like the real Galaxy Edge in the game?

AR: Yes, there is a lot of content that can be used outside the pack, especially there are a lot of clothes unlike other game packs of the past, for example, you can take your swords and androids home if you wish.

Is there original music from the trilogy?

AR: No, rather we took the music from the Galaxy Edge of Disneyland and Disney World. We also took some tracks from the latest trilogy and remixed it to fit the style of the Sims universe. What if you will hear the music played by the DJ in the real bar of the Galaxy Edge with some new tracks.

How many kinds of lightsabers can we make?

AR: 12 with new designs that were created for this pack and 7 different crystals, we obviously have the typical red, blue and green, we also have purple, white, yellow and you can have a black one, but this gives you a red saber, like this which are basically 6 colors of sabers with 7 crystals. 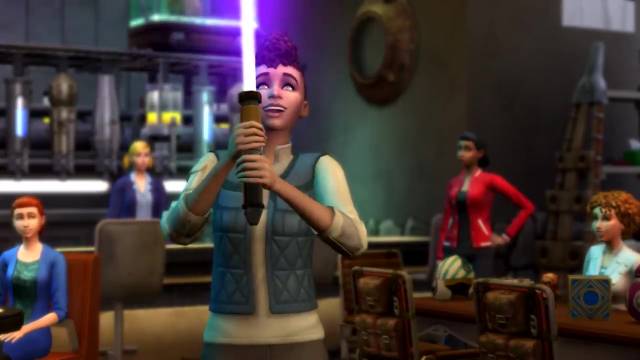 How many drinks are in the pack canteen?

AR: There are 10, which you can try directly at the bar, although you can also learn the recipes so that when you return home you can prepare them.

How many types of androids can we and have?

AR: We have the R and BB series with multiple color variants with 3 head types per class. More than 300 combinations at least, that without taking into account the personality chips, which are 6 or 7 if you include the neutral, plus the two that are per faction. This changes in part the sounds of the android and therefore of the reactions of your Sim.

Can we fly ships?

AR: Of course, your Sim can take the Millennium Falcon or the X-Wing for your missions. 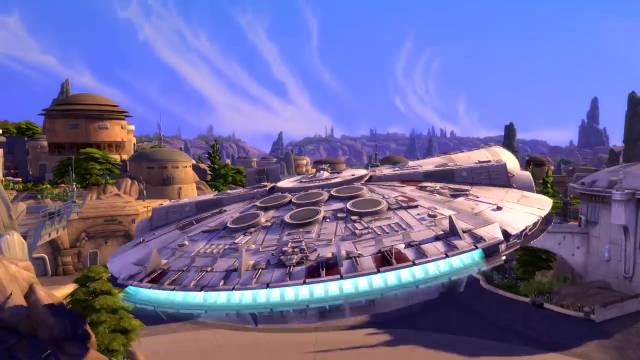 Is Chewbacca in Star Wars: Journey to Batuu?

AR: Yes, but he is hiding from the first order so that they do not arrest him, he will be inside the millennium falcon for some missions.

Will we have speeders?

AR: If the X-34, which is undoubtedly one of my favorite objects as a Star Wars fan, in fact, it is one of the things that you can take home if you wish.

And finally, the producer added that all the objects have color variations and if we look closely, we will see all the references they put from the Star Wars universe, for example one of the variants of the X-34 will be like when Luke Skywalker returned to tatooine.