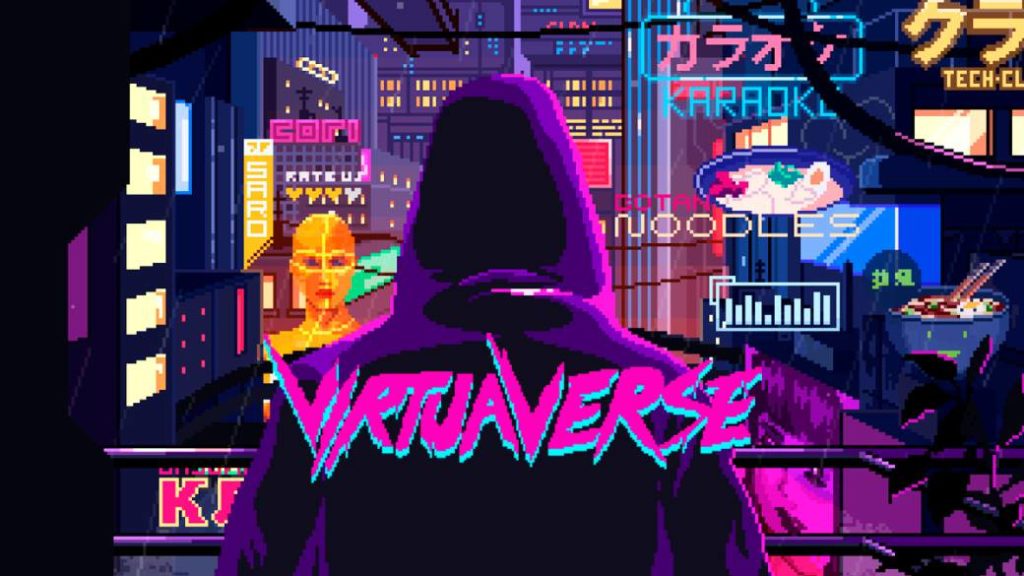 We analyze Virtuaverse, the new cyberpunk-themed graphic adventure set in an attractive dystopian future full of surprises and mysteries.

The fusion between the cyberpunk theme and the graphic adventure genre has been a fruitful relationship that has given us great joy for a long time. In 1994 we were able to enjoy the classic Beneath A Steel Sky, whose continuation Beyond A Steel Sky is one of the graphic adventures that we most look forward to in 2020, which is already facing its second half. In 1997 the long-awaited and versatile Westwood studio offered us a colossal alternative adventure set in the Blade Runner universe created by Ridley Scott, which by the way will receive a remaster in the coming months that will surely put it on the front page again. In 2011, when the graphic adventure reawakened from its forced lethargy with renewed vigor brought mainly by the emerging independent sector, Mr. Joshua Nuernberger delighted us with the wonderful Gemini Rue. In 2015, and having the quality seal that guarantees being distributed by Wadjet Eye Games (like Gemini Rue), we were able to enjoy the excellent Technobabylon. Since May 12, we have had a new exponent to add to the list, the outstanding Virtuaverse, a phenomenal graphic adventure of a totally classic style that offers us a more than attractive staging with the best cyberpunk setting.

The title is the debut feature for the small independent studio Theta Division. It is curious that the distributor that supports the title is not dedicated to the world of electronic entertainment, but rather it is the Finnish independent record label Blood Music, focused on extreme metal and electronic music, and which has such outstanding bands among its ranks like Emperor, Strapping Young Lad or Perturbator. Focusing on the proposal of the title, this drinks from the most classic influences of the genre to offer a graphic adventure that follows the canons established by the classics of the 90s. Virtuaverse has amazed us with its setting and its impeccable and ornate staging, but it has also gotten us a little mad with some puzzles of logic that are more than obtuse and whose integration in the adventure is not organic at all. Our final verdict ends up being positive for how much and good the title has to offer, but from now on we must warn that we are probably facing one of the most challenging graphic adventures we have played in recent years, and that we mainly recommend adventurers more seasoned and seasoned in the genre.

The adventure takes place in a dystopian future not too far away. Its inhabitants live permanently submerged in a kind of augmented reality supplied through implants that are carried by almost the entire population. Control of this augmented reality is carried out by an artificial intelligence that has seized power after ousting governments and rival artificial intelligence. In the midst of this panorama, our protagonist will be Nathan, a young man who is dedicated to modifying hardware and pirating software who has a true passion for old technology. Unlike most of his peers, Nathan has not implanted the devices that keep them permanently connected to the augmented reality neural network. This gives you the advantage of being able to access it using your virtual reality glasses, but at the same time continue to contemplate the world as it is without the permanent intrusion of augmented reality, a detail that, as we will see later, has an impact on the gameplay of the title. .

The starting point of the plot is a mysterious message that Jay, Nathan’s girlfriend with whom he shares a flat, has left in the bathroom mirror before disappearing. Our mission will be to follow in Jay’s footsteps and try to figure out what she’s in for, having to disappear in such a cryptic and abrupt way. As it could not be otherwise, we ended up discovering a conspiracy that affects the destiny of humanity, in a somewhat hackneyed and not excessively surprising story. Without being bad at all, the plotline doesn’t stand out, nor does it offer any memorable moments or script twists, and it turns out to be quite predictable. Nor do the characters that inhabit this dystopian future shine too much, since neither the protagonists nor the secondary characters turn out to be complex characters or with too much to offer. But as we will see later, what most affects the story are certain playable problems with the puzzles that end up causing the rhythm of the adventure to seriously suffer. Fortunately, the game has a more than correct translation of all its texts into Spanish to facilitate its enjoyment. 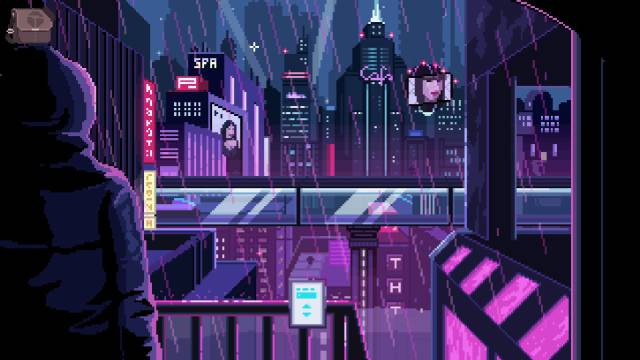 At a playable level Virtuaverse bets on a totally classic approach, despite using a simplified interface already common in all modern exponents of the genre. The control of the adventure is done entirely through a pointer, which we will use to move our protagonist through the scenarios, and that will highlight the name of those elements of the same with which we can interact. At that time, we will have the option to see a description of it or interact / use / speak as appropriate, in that simplified approach with respect to the classics of the 90s in which this more than challenging graphic adventure is so inspired. And is that like those, the difficulty at certain points is insane, and not always for the right reasons. Virtuaverse inherits part of the worst defects that the genre suffered from in its golden age: puzzles that are not logical or not organically integrated into the adventure, key objects that go completely unnoticed camouflaged on stage (the always hated “pixel hunting” ), or moments when we have no idea what to do, and the solution was in a character or dialogue that at the time did not bring us anything, are some of the ills that adventure suffers.

All this is aggravated by the tendency of the title to make us return to past scenarios and go around them, in a sort of backtracking that combined with how slow the character moves (he cannot run), and how usual it is that It happens that we have no idea where to shoot, they make the rhythm of the adventure suffer a lot. This is a shame, because yes, we also find many ingenious puzzles, the kind that when you hit the key and solve them, it turns out to be a moment of great satisfaction. But there are also several that seem to be more annoying and an obstacle than an organic means of making us think fully integrated into the adventure. Without a doubt we are facing a game that becomes really frustrating, focused on the most veteran of the genre who truly miss the crazy challenges that the graphic adventures of the 90s presented to us. And this is a pity, because a priori we were facing a title that had it all to be a new modern classic, but that stays halfway because its creators could use the odd lesson in puzzle design in graphic adventures. 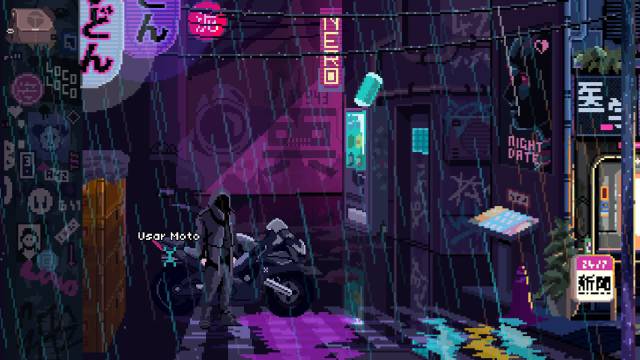 As a point in favor, the introduction of original mechanics that add possibilities to the approach of the mentioned puzzles. For example, once we repair our virtual reality glasses, we can alternate between the vision of the real world and its perspective connected to the augmented reality network, which gives play to introduce variety in the adventure. The puzzles are mostly the classic inventory of using the right object in the right place, or using the necessary dialogs at the right time, but we also find other types of puzzles such as connecting cables or hacking systems. In short, good ideas that are seriously clouded by bulk errors. In terms of duration, we are more than well served, since depending on our expertise the adventure will last us between 10 and 15 hours, even more if we get stuck as it is very likely to happen.

If Virtuaverse stands out for something, it is for its exceptional staging, being a wonderful title both for the eye and the ear. When it comes to the visual, we are facing a superb pixel art explosion that masters on screen the peculiar future that it poses. Overloaded, full of neon lights and with the almost permanent presence of rain as it could not be otherwise, the graphic section of the game oozes quality and good work on all four sides. The artistic direction used is a great success, and draws formidably from the great inspirations of the futuristic and cyberpunk genre. What has surprised and liked us a lot is the great variety of environments to visit beyond that dystopian city where we started. We are not going to reveal anything to avoid gutting, but the title is fully correct when taking us to very varied locations that we would hardly expect to visit in the early stages of the adventure. All of them highlight the enormous amount of details present at all times, with the addition that we will see when activating our augmented reality glasses. The animation work of the sprites is correct, without fanfare but effective. Also noteworthy are the various cinematic scenes that dot the development, which remind us of the ones we saw in the 16-bit era, specifically they have evoked the mythical Flashback. In short, the excellent staging of Virtuaverse is undoubtedly one of the strengths of the title. 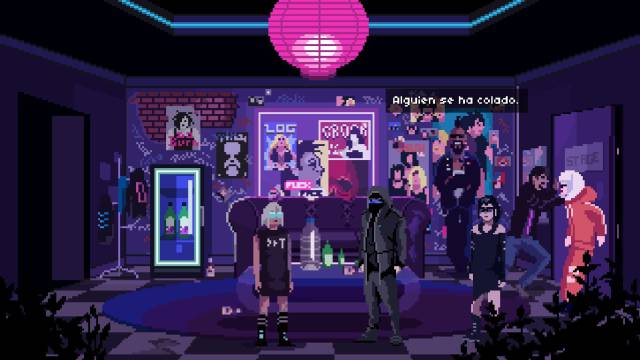 Considering that the distributor of the game is a record company as we discussed in the opening paragraphs, it is not surprising that the musical quality of the title is excellent. And it is that the soundtrack is in charge of the Master Boot Record group, which is part of the ranks of Blood Music, the aforementioned record company. The work of the Italian band fits in wonderfully with the proposal of the title, mixing industrial music, electronics and metal droplets and synthwave to offer a fantastic accompaniment to the adventure. The variety and strength of the tracks will make our ears enjoy themselves while music helps us immerse ourselves in this unflattering future. The negative counterpoint within the sound section is the total absence of voices for the dialogues, which ends up being noticed, especially when we consider that as we have already mentioned the characters are not especially memorable, and in the case of having their voices personalities would have been more marked.

Virtuaverse is a great graphic adventure in a classic style that boasts a superb staging to recreate an attractive dystopian future of cyberpunk style. Without being a panacea, it presents us with an interesting but predictable plot. Its main problem is its irregular implementation of the puzzles, where although we find some very satisfactory, we will also come across several whose introduction is not organic at all, which suffer from very fuzzy logic, pixel hunting problems or fuzzy implementation. The backtracking tendency of the game does not help that such problems do not seriously affect the rhythm of the plot. If we overcome these difficulties, we will find an interesting graphic adventure that is delicious visually and sonically, especially for the most staunch fans of science fiction. In short, we are facing one of the most challenging modern exponents of the genre, and we recommend to those more seasoned adventurers that they miss in the modern graphic adventure that madness difficulty of which the classics of the 90s who boasted so much inherit this title, for good and for bad.