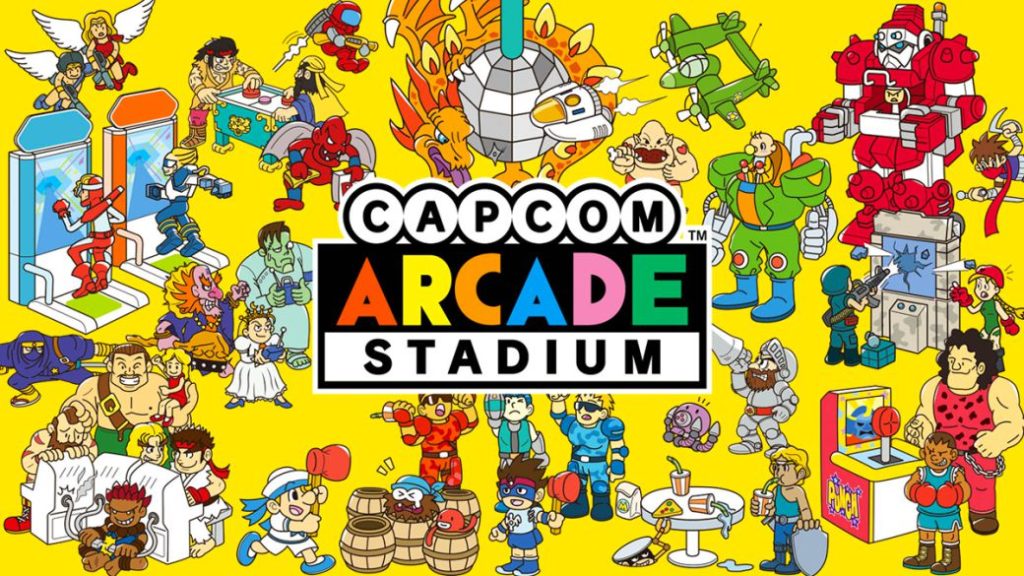 Arcade machines have been around since the very birth of the video game industry. They lay the first stone of their huge cathedral in that bar where Pong’s yellow and brown cabinet saw its slot for inserting coins jammed. This can work, thought Nolan Bushnell and Ted Dubney when they saw that small initial triumph. Since then, and until their long agony at the turn of the century, they were one of the greatest rivalries in the world of video games, the fastest and fiercest.

The competition was fierce to bring to the salons or the most remote bar in the country the most spectacular machine, the most fun, the one that would steal the hearts (and what the pockets contained) of thousands of fans. Today that Pong furniture shows its well-deserved retirement in museums, and the thousands of pixelated children it had around the world come back to life again and again in the form of well-deserved compilations. Not even the oldest of us forget those glorious times, nor do the youngest feel the slightest rejection of something so ancient. And this is a gift worth analyzing.

I think there is something that we do not appreciate enough, and it is the ability of video games to make the past and the present coexist commercially at the present time. Unlike in the cinema, for example, where the classics have it difficult to peek into the most successful streaming platforms and the younger audience is in other tasks, in video games everyone can enjoy the titles of past decades without too much trouble. This is partly because the restless indie world keeps it alive in substance and form. Today’s pixel art is the two-dimensional window through which many have looked at a time when squares were the only possible form of interactive representation. There is the critical and popular triumph of Celeste or the recent million copies sold reached by Blasphemous. Beyond the pixel, we can even find black and white productions. There we have that modern classic that is Limbo (which appeals to the grainy and flickering expressionist celluloid of the early 20th century) or the polygonal Mundaun.

Compilations of classics from the 70s, 80s and 90s are popular with Atari (Flashback), Konami (Aviversary Collection Arcade Clasics), Namco (Museum), Capcom (Classic Collection, Beat’em up Bundle) or Sega (su Megadrive compilation is one of the most generous in quantity and most attractive in quality / price ratio); the sagas are grouped into succulent packages such as Megaman, Castlevania or Contra and the main value of Nintendo’s online payment mode is found in the more than 100 NES and Supernes games that allow us to enjoy the service. Having an arcade from the 80s or 90s at home is the most modern thing in the world and accumulating roms by the thousands is a widespread custom. In Spain, the National Library carefully preserves our video play history, and throughout the country we can find associations that recover, repair and exhibit hundreds of arcade machines for the enjoyment of all. Yes, classic cinema has to be dead, the poor man, from envy. 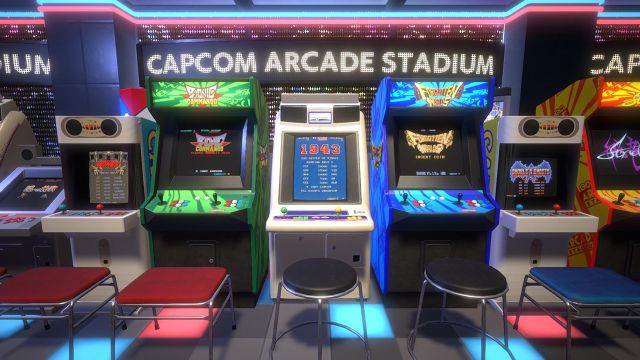 Content and ways to get hold of Arcade Stadium

We have several options to purchase Capcom Arcade Stadium. We can download the program and enjoy 1943: The Battle of Midway for free, and then we can do it together (39’99) or separately from the three packs (at 14’99 each pack) with ten games each. Thirty-one games spanning three decades to which we must add the mythical (and devilishly difficult) Ghouls’n’Ghoblins, which is unlocked once we have them all. The distribution of the games per pack would look like this:

As you might suppose, as we move from one pack to another, the colors, the sprites on the screen, their size, the scroll planes and the brilli brilli effects multiply. In all of them we find authentic wonders, so the choice of one or the other, if we make them little by little, depends on the greater or lesser retro touch that we want and, if you are an old man, the one that brings you better memories. 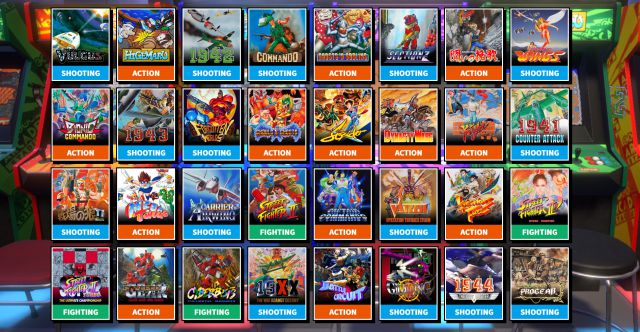 Capcom Arcade Stadium, seeking to give value to the umpteenth compilation of classics

With the ease that exists today to make, in a non-legal way, huge packages of games to run on emulators, companies have chosen to offer their old catalog with the best possible service, and this includes not only the faithful representation of the original games, but the proliferation of options that update them in the way we have to enjoy them.

Capcom offers a long list of options that is to be applauded, although these are based on user experience and are forgotten by the collector. In Arcade Stadium we will not find the encyclopedias that have accompanied other compilations: development diaries, scanning of original designs, company history, publicity of the time … Although it does include an always appreciated option, and that is in most cases We will find here the Japanese and Western versions, being able to switch between them with a simple click before starting to play.

The bulk of things we can do is to make life easier for the user. We have a multitude of ways to view each game, from the screen format, which includes inclined arcade frames, to the typical filters that bring us as close as possible to the memory of the TVs and tube monitors of thirty years ago. We can save at any time, rewind the game when we screw up as well as vary parameters such as the number of lives or the speed of what appears on the screen. If at any time you have dreamed of peeking inside a Bullet Hell without getting too scalded, this is your moment.

Honoring the collection’s Stadium concept, the second decade of the 21st century looms in the form of periodic challenges and online leaderboards. This will be where the most hardcore line of players land, with a continuous spike with tight and continuous ups and downs in the world rankings. 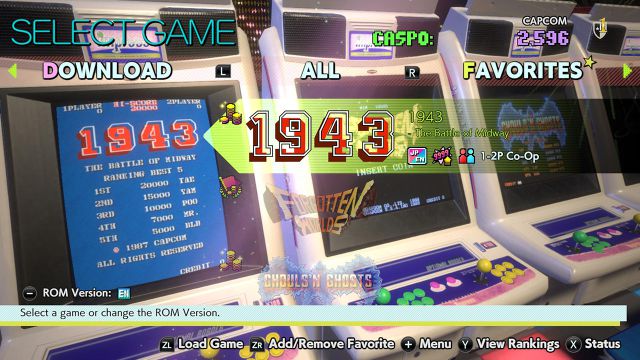 Finally, we must not forget how good the portable mode of the Nintendo hybrid suits these jewels. Even its portable mode by pulling the pin, with the joycons disengaged, will give plenty of fun anywhere sharing with a friend the cooperative multiplayer experience that some titles offer. And it is difficult to find something bitter in a candy like this.

The difficulty of arcades of bygone ages was due to the need for players to continually rotate to make them as profitable as possible. In Arcade Stadium, with so much help for today’s player, the anguish of losing five dollars in a few minutes is lost (we have here infinite games that are activated with a successful click on the right joystick). It is always something that we can ignore when facing any of the games, but it is difficult to ignore a rewind that saves us from a stray bullet. The focus that shines is of course the online qualifier, which will give new life to these old trees. As children we were, it is a pleasure to climb these lush branches again.

Capcom does not dust off its classics here because they have never lost their shine. The collection of thirty-two games that we find here divided into three packs has always been, for the most part, an eternal present. There are Bionic Commando, Strider, Ghost & Ghost / Ghoblins, the 19XX, some of the most celebrated installments of Street Figther II. Arcade Stadium is an excellent display of the company in the golden years of arcades. The compilation, which takes us from 1984 to 2001, drenches the memory of several generations and opens seamlessly to new players. Newcomers will not be strange to pixelated designs and side scrolling mechanics because they see them every day from the hand of fantastic indie games. It is primarily they who will take advantage of the online qualifying options and recurring challenges. It is to be appreciated this type of compilations that preserve the past of the video game in the present for the future.