You are here: Home / News / Halo Infinite gameplay in detail: changes, news and what to expect 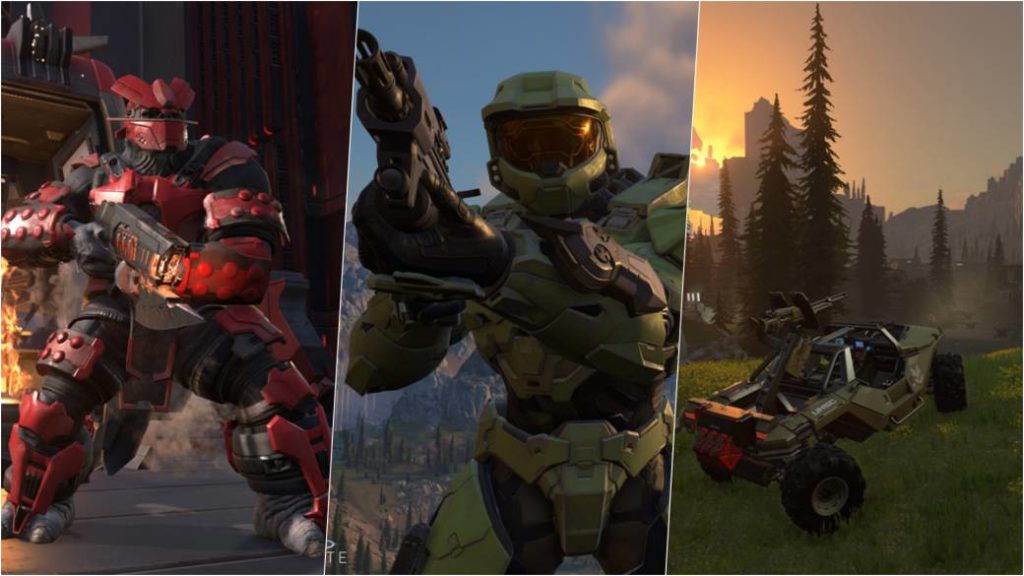 We analyze everything that gives the first gameplay of the Halo Infinite campaign. What news and changes does it introduce at audiovisual, playable and design levels.

Halo Infinite’s first real-time footage reveals more information than meets the eye at first glance. This debut of the campaign has allowed us to observe how the gameplay feels behind the screen. Since 343 Industries took over the saga, the company decided to cede the Master Chief an assortment of unpublished tools in the main deliveries. While Bungie started this drift with Halo Reach, having the abilities become part of the Master Chief’s mechanics resulted in a modern-leaning shooter.

What has been known so far in Halo Infinite mixes the two phases that the brand has gone through, and even leans towards a way of playing closer to the Halo that we always knew. In this piece we will dissect what the video has produced and what we can expect once it arrives during this end of the year. 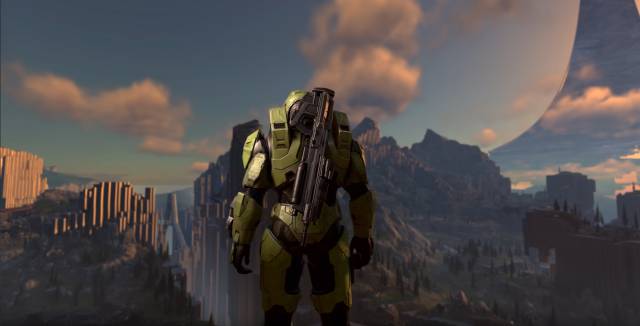 Everything that surrounds the audiovisual aspect inevitably reminds of the hallmark of the origins of the saga. This “soft reboot”, as they call it, is accompanied by a visual line that breaks with the main additions of 343 Industries in the last two main deliveries. From John’s armor to the tuning of the assault rifle, which has changed its appearance to a similar design to that seen in Halo Reach.

This trend is transmitted in the design of the Elites. The classic line returns, lined from head to toe without showing an iota of its skin. There’s even a break from the designs seen in Halo Combat Evolved Anniversary. Again, we see a mix of traditionality with the renovation that Bungie made in his last job. The same is true for Jackals and to a lesser extent for Grunts. 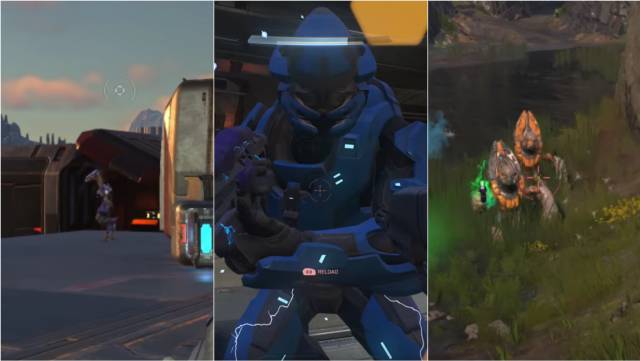 The line of sight of the enemies bets on the classic side.

Changes that reach a sound level. Ballistic weapons have lost their realistic sound; It is difficult to appreciate the characteristic metallic impact of the caps when firing. We return to the assault rifle: it is not a familiar sound, from the typical incessant popcorn maker of Halo 3 and Co. And it is not exclusive to it, since both new and existing weapons have completely changed registration. Covenant weapons have that fantastic, unreal, alien weapon point.

The winds of change reach the musical sphere, where we can appreciate the return of the leading role of the choirs, of the incessant percussion before the storm. Curtis Schweitzer, composer in charge of the Halo Infinite soundtrack, is joined by Gareth Coker, who you will meet through each installment of the Ori saga. Supervising is Joel Yarger; The trio, as commented on Halo Waypoint, will be in charge of “elevating the excitement and richness of the Halo Infinite experience by building on the musical traditions of the franchise.” And is not for less. Memories of the compositions by Marty O’Donnell and Michael Salvatori rain down in the nine minutes.

I am happy to announce that I’m scoring @Halo Infinite alongside @cschweitzer https://t.co/na1tOfslPb

343 Industries constantly insisted on making you feel inside the Master Chief’s armor. That philosophy brought with it several decisions at the interface level, since all the information you received was subject to the features of the helmet you were wearing. Halo Infinite removes the edges of the helmet and lowers the position of the weapons and grenades to the bottom right of the screen. Even the powers are in the same position. The novelty resides in the upper left side of the screen, where the information of the objectives that we have to complete in the mission is displayed. This area is hidden after a few seconds and can be returned to the screen with the press of a button (minute 5:35), which seems to activate a kind of smart radar. 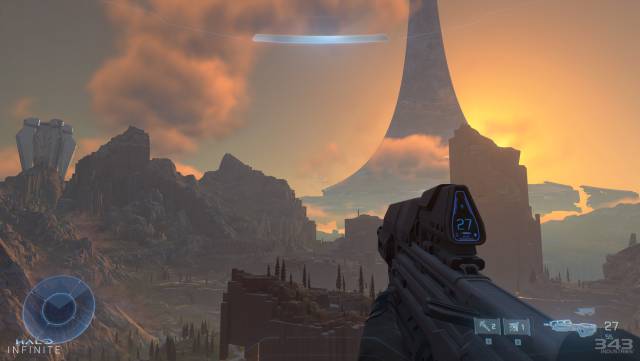 The interface has been cleaned up. Goodbye to the edges of the helmet.

But it does not follow from all the elements of the interface of Halo 5: Guardians. The icons have the same degree of detail, as if it were a hologram. Impact markers and death confirmation are also maintained. It is quite useful in this regard, as eliminating an enemy gives you a unique on-screen sound and gesture. The same is true of grenades, which maintain the sound of the buckle that accompanies their wake. 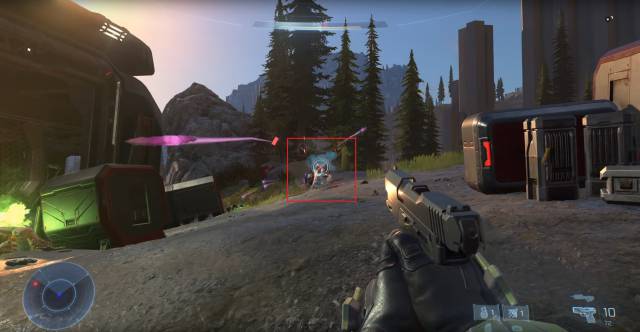 Throughout the video a classic way of playing is used, which means that shooting from the hip will have no penalties. The only evidence of targeting is at 3:49, an action that takes just a second. This situation leaves us in doubt, since it is made with the unprecedented VK78 Commando, an automatic tactical rifle that incorporates a reflex sight. The targeted, unlike its predecessor, occupies the entire screen, as has always happened in Halo; In the fifth numbered installment, emphasis was placed on realistic targeting thanks to the intelligent link incorporated in the viewfinders, which allowed us to aim “with the iron peephole”, the basic mechanics of any modern shooter. However, here we return to the origins, at the typical zoom. Will it be possible to aim with all weapons? There has been no official information. 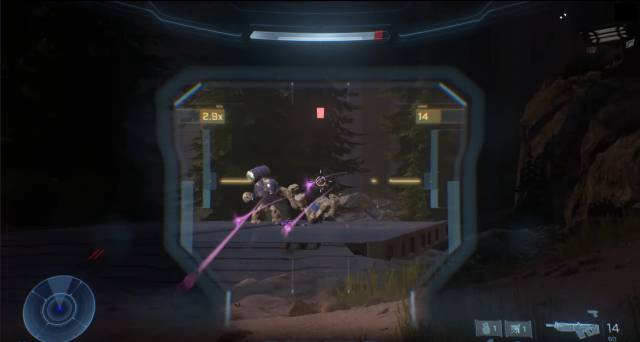 When aiming, the classic zoom returns in front of the smart link. Can all weapons be aimed at?

We also don’t know what the default control layout will be. The only recognizable buttons in the displayed build break with the idea that targeting is an essential part of gunplay. Look again at the interface weapons: The left trigger, LT, is linked to the launch of the grenades, while the RB button performs several functions: pick up weapon, contextual action, use active ability and reload. So would we aim again by pressing the right stick? We do not know, but it would be impractical for such a relevant mechanic as in Halo 5 to happen to be there. The disposition of the active ability changes during the video. Until 4:02 it remains in the RB, but after collecting the screen shield and using it, it passes to the LB. 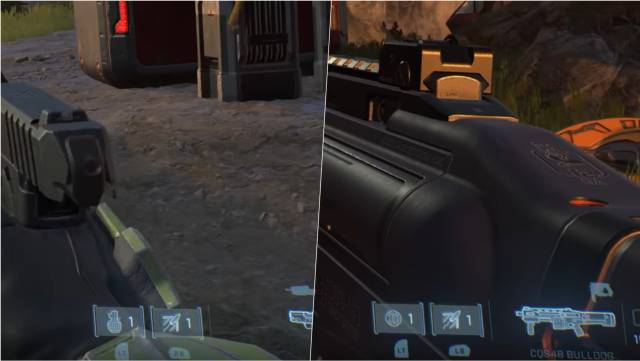 During the video, the active skill button changes from RB to LB.

Except for the assault rifle, the weapons the Boss collects are new to the main branch. Beyond the previously discussed, we see the Ravager, a weapon made by the Banished. Broadly speaking, it is a burst plasma launcher that has limited ammunition, that is, you can only use the one that comes with it. By not having to recharge, the mechanics is replaced by an overheating that we can control in the sight glass bar; if we fail, we can cool it with RB. We found a conversion of the classic Type-51 in the pulse carbine, although its performance is traced to the launcher with the exception that its bursts are faster. 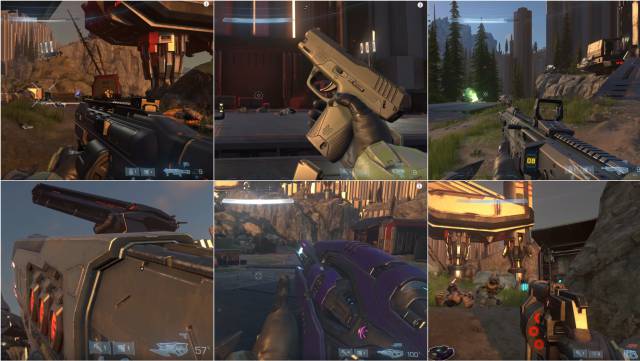 Six of the unpublished weapons in Halo Infinite.

On the pistols side, the human girdle becomes the Mk50 Sidekick, a fast short weapon similar to the one seen in Halo 2. We should not confuse it with the Magnum, since as we can see in the video it has less damage and more cadence. The other visible is Mangler, Brute style and with great destructive capacity. Last but not least, we see a new version of the shotgun, called the CQS48 Bulldog. Thanks to its drum magazine it has 10 bullets capacity; despite its rapid fire it is still sliding. The gameplay doesn’t show some weapons seen in the trailer that accompanied it. In just 1 minute we see the return of iconic weapons of the saga, such as the sword or the battle rifle, whose appearance is very similar to that seen in Halo 2: Anniversary. In it you can see the return of the energy absorber, which adds a new function: paralyze the enemy. 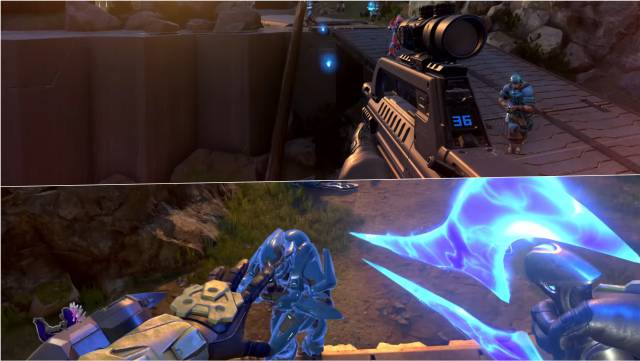 The battle rifle is similar to its appearance in Halo 2: Anniversary.

Perhaps the protagonist of the gameplay is the way in which we can influence what surrounds us. The stage is full of opportunities for interaction that can be exploited in our favor. Physics have always been relevant in the gameplay, and in Halo Infinite it seems that he did not want to do without them. Bombs, destructible elements, power-ups … The hook is added to the list, which seems not only to increase the possibilities of navigation, but also allows to collect elements from the stage from a distance, as well as launch ourselves towards the enemies. We do not know if it will be a limited consumable; after using it, it requires a minimum refresh time, and it seems not to be lost when picking up other abilities, such as the lock screen. The icon is accompanied by a number. Can we carry several at the same time? We do not know. What the video does show is that we can vary the behavior of some enemies. At 4:03 a Brute is seen to lose speed when shot in the leg. 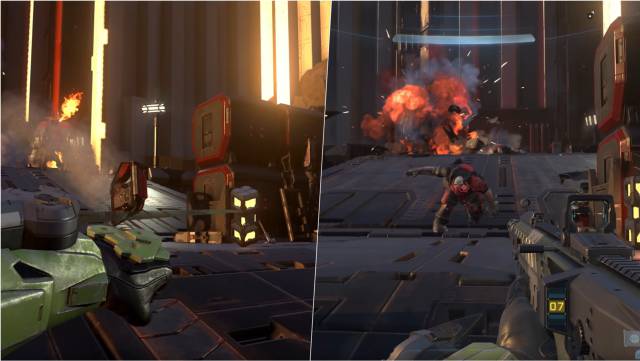 You can grab items from the stage with your hook. It is also possible to influence the behavior of the enemy when shooting a part of the body.

During the session we attended in front of those responsible, Paul Crocker, Narrative Director, assured that we will have “many things to do” in explorable areas. “We don’t want to restrict the Master Chief’s movements, he can go wherever he wants; we have a story to follow but also a lot of things to do.” The demo was played on normal difficulty. When I hovered over the mission icons, it allowed start it by pressing the X button; if you want to know the list of available missions, you can open it by clicking Y. 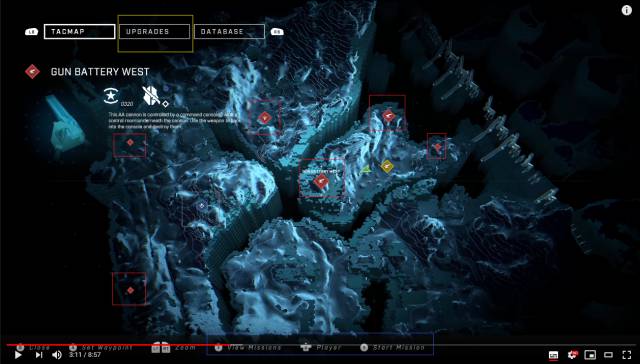 When selecting the global mission, three secondary icons were displayed: two figures next to a number and a percentage of points that we do not know what they mean. They could be linked to the enhancements menu, placed at the top of the sections. Nor is it known in what sense we can incorporate news.

There are three types of icon: yellow, red, and blue. The last two can be linked to secondary content or tasks, while yellow takes you to the main objective. The ring is made up of different island formations of disparate sizes. However, in the initial we are forced to destroy the anti-aircraft guns in order to escape it.

Given the evidence of certain elements, many unknowns remain to be cleared up on key themes of gameplay, as well as the functioning of its open world. In any case, the coming weeks are key to propping up a launch that aims to accompany the Xbox Series X once it arrives in late 2020. The same day it will also land on Xbox One, Steam and Windows 10.

Obviously it seems that the next stop will be multiplayer, which is warned that we will know the first details “soon”. Until then, these almost nine minutes of footage is the only piece in real time that can be analyzed in detail.