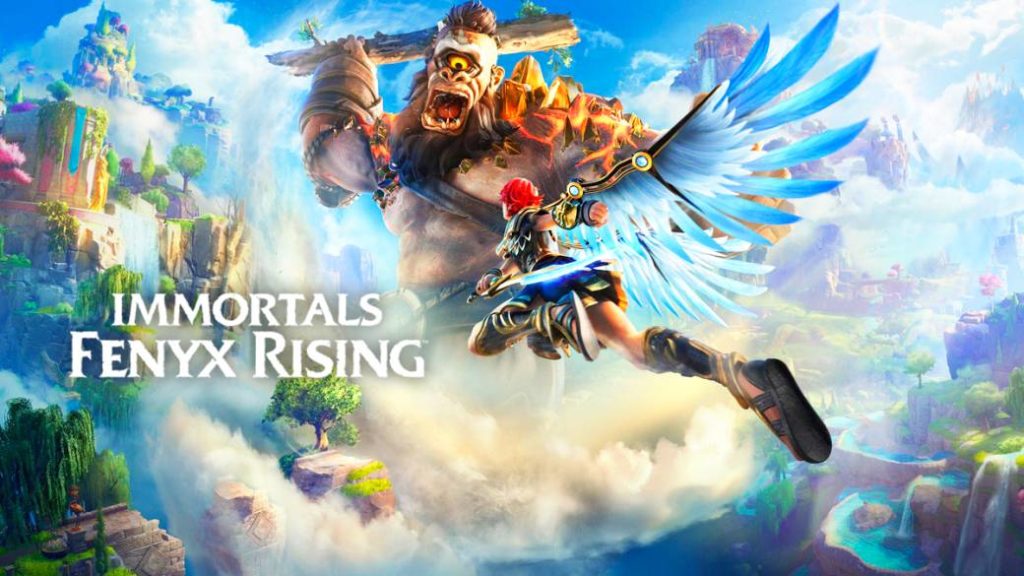 Formerly known as Gods and Monsters, Ubisoft’s new title scheduled for December on PC, PS4, and Xbox One marks muscle. We have played it for more than two hours.

One of the games that left a good taste in your mouth and wanted more at Ubisoft’s E3 2019 was Gods and Monsters, a title with fantasy graphics that seemed to drink and a lot of Assassin’s Creed. Little else was known about the game until a few weeks ago, in which it changed its name to Immortals Fenyx Rising and in which we were invited to test the title for more than two hours. It was there that we realized that yes, it did have Assassin’s Creed stuff. But also from Breath of the Wild. A mix that works remarkably well and that allows us to expect a lot from the next title from the Ubisoft factory.

Immortals Fenyx Rising puts us in the shoes of the protagonist, a chosen one who has to end the forces of evil that lurk in seven regions of a world inspired by Greek mythology. In fact, Zeus is the narrator of this story, with a very particular touch of humor. Shortly after starting, the God says that we will be able to jump on platforms and hold on as happens in “Tomb Rai …” and Prometheus, the other voice that explains the events of our mortal hero, tells him to be quiet, they do not want problems legal. 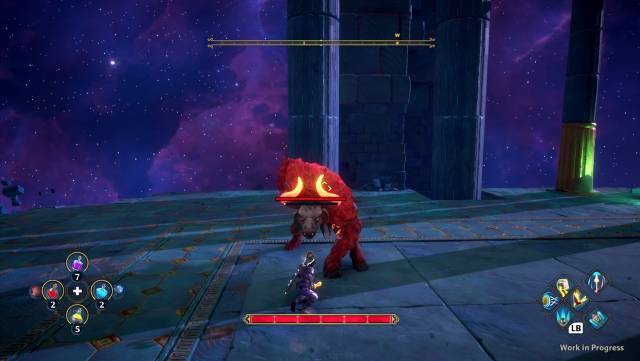 Ubisoft Montreal’s new title does things reasonably well in almost everything it touches and in everything it dares to propose. He is not Michael Jordan in the Bulls, something never seen and difficult to compare; but he’s not at all the Jordan who tried his luck in the world of Baseball. Just try to adapt familiar ideas and mechanics and give it a touch of your own. He does it most of the time. But what exactly is Immortals Fenyx Rising? Basically: Action adventure. Open world. With puzzles. Platformer. Some RPG progression.

Our protagonist moves with agility through the stage (the region that we could see, and only a portion of it) thanks to the large number of mechanics it has. With its wings it can glide and propel itself through the skies; or double jump. For his part, at ground level, in addition to running, he can summon a horse at the moment to gallop faster. We can climb almost every place. And almost all of this uses an energy bar that recharges over time or by taking certain potions that we can create if we find the right materials. Very Assassin’s. Also very Breath of the Wild. All this means that we can try to climb the highest mountains or fly over tens of meters with our wings. 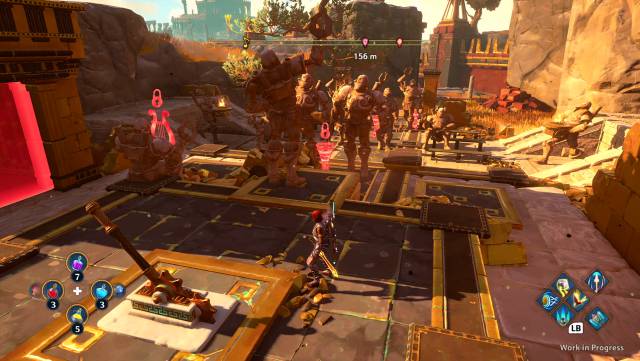 There are two key mechanics in the game: combat and puzzles. In the case of the first, the staging will remind us of the last two Assassin’s Creed, due to the life bar system, the energy bar that leaves the enemy stunned if we break it and also the combat system, with the four abilities Attack cards assigned to each button. Combats allow us to carry out counterattacks to sell the enemy, dodge at the perfect moment (yes, with a time slowdown if we do it right), and the possibility of making various combinations, in addition to the ability to fight in the air thanks to the wings and certain attacks. There is no lack, either, unblockable attacks from enemies that we can only dodge and the perfect complement for ranged attacks: our bow.

During battles, after getting used to the large number of options and controls, we felt that everything was flowing. Quick attacks, a hammer for the most forceful blows, special abilities such as an attack with a shield or swords that come out of the ground to lift a group of enemies … The large number of enemies on screen makes them demanding combats, because each one of them have their patterns. Some carry a shield and block our combos, others shoot fireballs at us from the air, others attack at full speed … The Greek mythological fauna and flora in all its splendor, yes, from a perspective and aesthetic that responds to what that videogames offer as a rule. 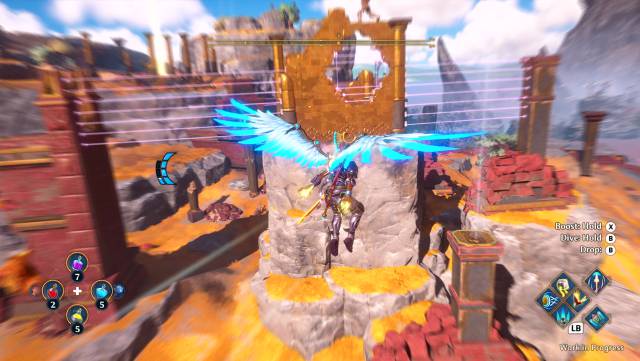 During combat we have four potions available with the crosshead to improve attack, improve defense, recover resistance -which is also used with special attacks- and recover life. The fact of spending energy with the attacks makes us think well how to manage each combat, in addition to the use of potions … Because running out of them can be a problem with certain enemies.

The main mission we played required us to activate four pillars to enter a temple, and here the puzzles entered the scene. To activate the pillars we needed to light the fires inside them, and that involved finding flammable material and launching arrows that ignited to generate the final flame. How? Well, with two key mechanics. On the one hand, an ability that is the image and likeness of the Breath of the Wild magnet, which allows you to hunt objects and transport them, throw them at full speed, etc. With this we take the flammable balls and throw them into the hole of the bonfire. And to light the arrow, we shoot it in such a way that we start to control it in first person, moving its trajectory and speed to pass through a torch and end up lighting the ball. All this with prior demands on each pillar: kill certain enemies, break blocks that prevent us from passing …

Upon achieving this, but not before ending dozens of enemies in each area of ​​the pillars, we entered a large stage to fight against a major boss. Dodge unblockable attacks, use all specials when touched, and crush him when he is stunned without energy. Hard, but to the canvas. After that, the demonstration allowed us to explore the vast world that we had before us and that was full of events of various kinds. 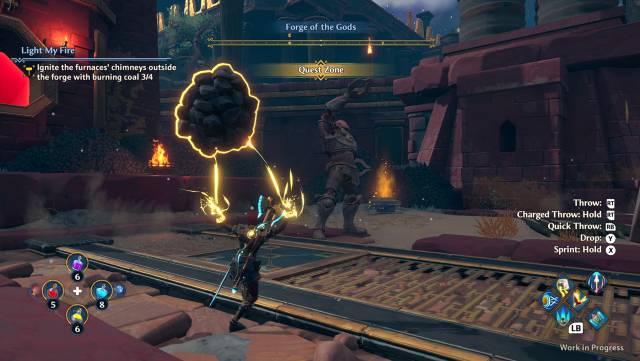 Challenges for the Gods

Outside the map we were faced with all kinds of challenges. From places with treasures to get better equipment to optional bosses that are very hard to beat, passing through tests designed for the Gods that put, worth the redundancy, our worth to the test. They were divided into four types. A test with a bow, where we had to shoot an arrow and follow the entire sequence on a specific circuit to successfully overcome it. One of puzzles in which we had to unlock several balls in closed places by opening doors, shooting switches and others to make a sequence on a board and win a treasure; a third one that was a test through the air, controlling our flight with columns of wind to reach the goal without touching the ground; and finally, a great literal puzzle in which we first had to find the pieces and then fit them well to create a mural.

The feelings with all these tests were very positive, of old adventure (in a good way) and with a spirit of the game wanting to offer moments of reflection beyond the combat that was appreciated, because some of them were not exactly simple. Stop and think, something that is not always fashionable. To finish the list of main possibilities we also had the vaults, a kind of tunnels in which we entered as in another dimension: platform challenges, combat and puzzle to get new key skills to continue with the adventure. The logic, the manipulation of our environment and the size of some of the puzzles were the best that our experience with the title left us. 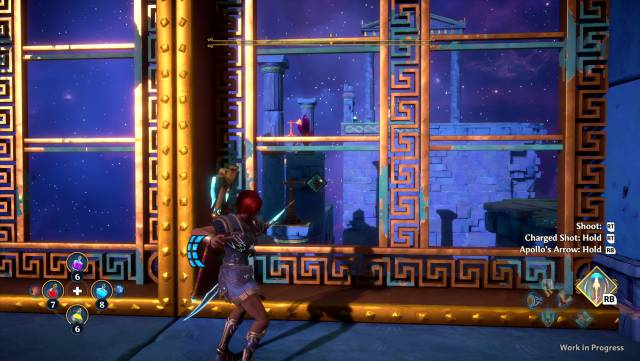 Everything we do revolves around finding better equipment, materials to improve said equipment and gain power, with a menu very similar to the last Assassin’s Creed. Weapons such as the sword, the ax, the bow, but also improve the wings, the helmet or the armor, as well as the horse. Elements that also have an aesthetic component, by the way. There was also a system for assigning skills and combat styles, but we couldn’t test it. All this with an audiovisual section in which the narration of Zeus and Prometheus and the design of characters and enemies on an artistic level stood out more than for their technical power. 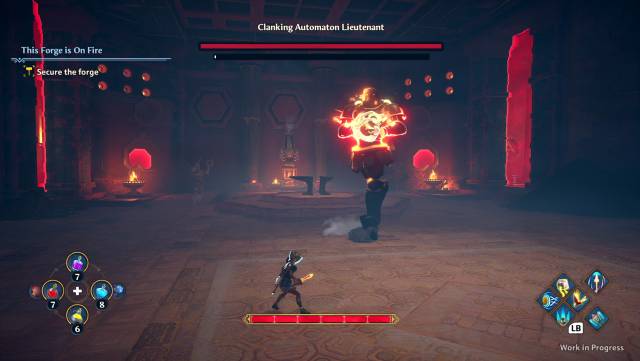 Immortals Fenyx Rising left us feeling very good after two hours of play. The title has many battles, and uses well-known mechanics although with its own elements, but it tries to offer much more thanks to the notable presence of varied puzzles and the constant use of all its possibilities in different situations. It is not arriving, taking down enemies and collecting loot. If you manage to maintain and evolve this variety of situations across regions, it will be one of your strongest points.