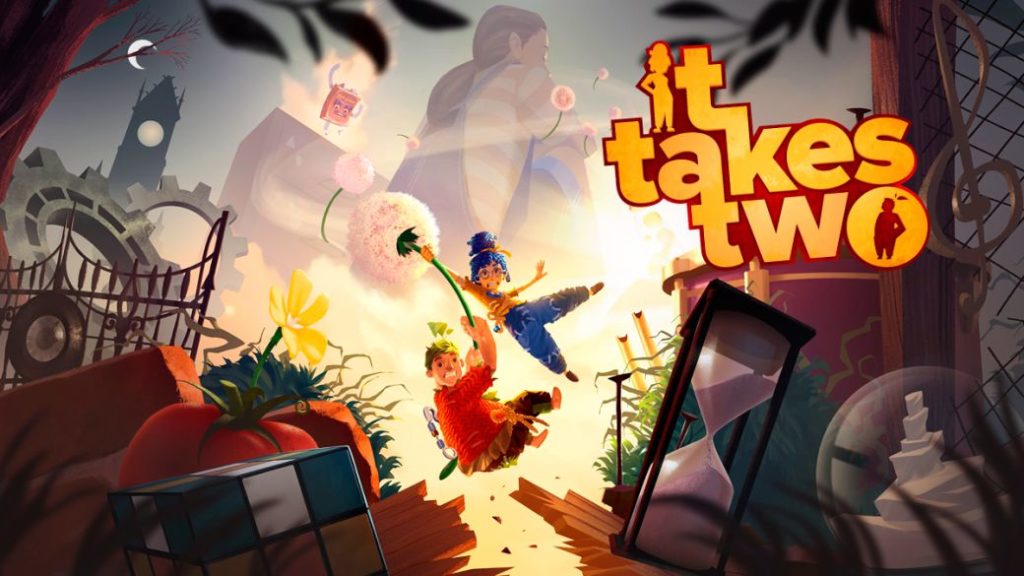 We have played the first two episodes of It Takes Two, the new cooperative proposal from Josef Fares and Hazelight Studios for PC, PS4, PS5, Xbox One and Series X / S.

Those of us who grew up playing video games treasure more than one memory related to spending the afternoons living adventures through the screen with a family member or friend. Split screen, two controllers and cooperative fun. Some ingredients that video games have been losing little by little over the years to evolve towards an online-based formula. Especially in recent times, when it has become increasingly difficult to get together physically, that feeling of playing in local multiplayer has been somewhat abandoned. However, some directors like the eccentric Josef Fares still maintain that spirit, which they embody in works that we can play and enjoy today.

This is the case of It Takes Two, his latest creation at Hazelight Studios with the EA Originals seal, which is already gold and will be available on PC, PS4, PS5, Xbox One and Xbox Series X / S from next 25 of March. We have already been able to play its first two chapters, in addition to attending a digital presentation with Fares, so then we leave you with our impressions of this curious and original purely cooperative work that is pleasantly surprising us.

Two against the world

May and Cody are a married couple with “problems in paradise.” After a long relationship that has resulted in a beautiful daughter, they have reached a point where their relationship has stalled and they both agree that the time for divorce is approaching. When they tell their firstborn, she reacts negatively. You could see it coming, of course, but it’s always a difficult conversation for any child. Even so, she is not one to give up, so using the creative power of any infant who creates magical fantasy worlds during her play sessions, she manages to transfer the consciousness of her parents to two dolls.

When they both wake up in their new bodies, made of clay and wood respectively, it takes time to get used to this surprising change until the “Book of Love”, also known as Dr. Hakim, appears to clarify the situation. This is a peculiar character (who has come to life thanks to a few motion capture sessions by Josef Fares himself), who arrives because “he promised his daughter that he would fix her marriage.” With this romantic comedy premise, the adventure begins and keeps pace at all times. The director of the title, Fares, admits that his favorite film in this category is “When Harry Met Sally” (1989) and that if you have to look for any similarity between the protagonists and real situations, it would always be fiction.

“The characters are not based on real people, but on the idea of ​​love that needs a little fixing” 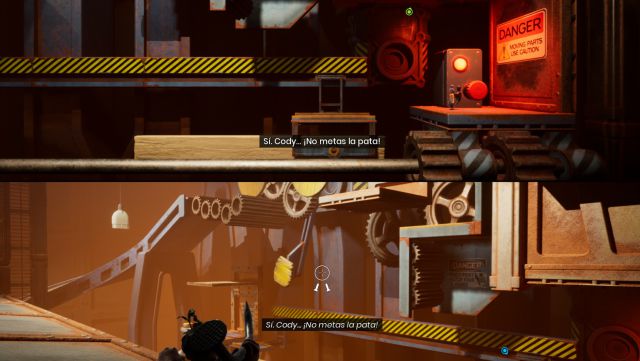 From Hazelight Studios they recommend playing It Takes Two as a couple, but we can enjoy it in the same way if we live the adventure with a friend, friend or family member, either locally or online. Of course: always cooperative. We believe that it is important to know the person with whom we play, since it will be necessary to communicate at all times to unravel together the puzzles that we find in each level. In general, there is no complexity if we have a pinch of ingenuity and have played other platform titles. Also, May and Cody cannot die, so when their life drops to zero (in battles against final bosses, for example or when falling into the void), they will simply respawn or we can easily revive them.

“I love the interactivity that the games offer. At Hazelight Studios we create uniquely cooperative experiences so that everything is focused on that experience from the beginning, ”says Josef Fares. It is an idea that we can attest after having played the extensive demo lasting more than three hours, since the two chapters that we enjoyed were a string of different levels from each other, purely cooperative stage puzzles and well thought out ideas. It Takes Two surprises us from our first contact with the controller and although it is true that certain situations will sound a bit familiar to us because we have played similar scenes in other platform and action titles, we guarantee that globally it comes out winning in the complicated race to dispose of own personality. 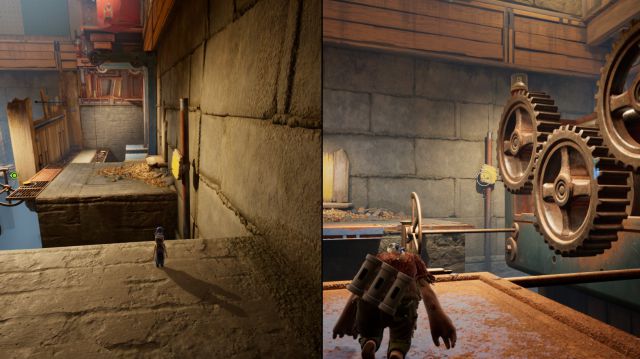 The protagonists will have to coordinate to advance on each screen and one will have to advance to activate the bridge and the other crossing, for example. To achieve this they will have tools and even weapons with which to defend themselves. If Cody has three nails to drive and drive into different surfaces, May has the head of a hammer to remove them or to propel herself up and down different sections of platforms. As we said, coordination is essential if we want the marriage to move forward and both reach the goal safely. Even so, there are also moments of competition, translated within the game as mini-games in which the couple can compete to see who of the two wins.

“We can replay it, but this is not the main question, since the percentage of players who pass the games again once they are finished is really low, not to mention those who do not even finish them once,” says Josef Fares, in addition to ensuring that we will not find collectibles in It Takes Two and that “they are very proud of it.” The reason is related to encouraging players to explore the scenarios in a natural way and not because they have the obligation to do so and the burden that for many is having to find dozens of collectible items in each level. One more proof of the creative vision and well-defined ideals that the studio has. 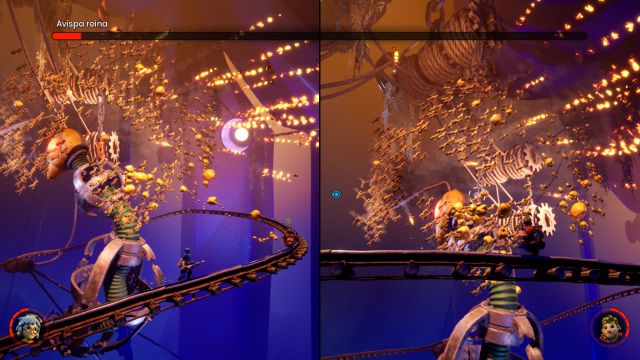 It Takes Two mixes several genres in its formula, so we can find both “platform” and action, adventure and even shooter. Yes, as you read it. As peaceful as they may seem, both May and Cody are up for arms when the situation calls for it. For this reason, in one of the levels they will carry a rifle and a highly explosive sap cannon respectively. Your objective is to fight an army of bees that is conquering the squirrel territory in the family garden. Yes, a somewhat bizarre situation but one that will produce a series of funny scenes.

Graphic, technical and sound sections “from an animated film”

Graphically, the title surprises with its overall quality, both for the facial expressions of the characters and their performance, typical of an animated film and achieved thanks to the fact that Hazelight Studios have their own mocap studio, as well as for the textures, lighting and other elements that make up its artistic section. It is a graphic leap in quality compared to what we played in previous Fares titles and that in certain scenes will really leave us in awe of the visual beauty that we can enjoy on screen. Of course, he is not looking for realism but for a much more cartoon aspect, but it is precisely that style that best suits this type of work. 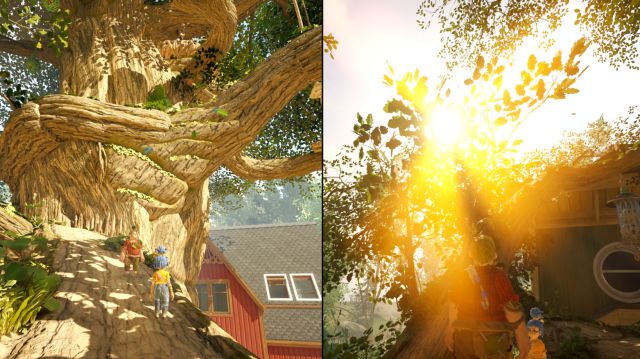 On a technical level, we have not detected any bug or serious problem during our gaming sessions. Having tried both local and online multiplayer, we can affirm that both work smoothly, something essential in this type of cooperative works. Although it is true that in certain scenes loaded with action and elements on the screen we have noticed a temporary drop in FPS, it is not something that hinders our gaming experience.

Finally, its sound section stands out for a varied soundtrack that adapts to each scene and situation, a high-quality English dubbing and sound effects achieved to accompany each action. It is fully translated into Spanish, so we can enjoy the game without barriers, in addition to having a commitment to accessibility, since we have the option of establishing subtitles for players with some type of hearing impairment.

A more than promising work

After Brothers: A Tale of Two Sons (2013) and A Way Out (2018), It Takes Two is the logical evolution of Fares’s cooperative formula and everything points to it being his most rounded and surprising work to date. Despite having played only two chapters, in just over three total hours of play we can already say that it has pleasantly surprised us and that we are looking forward to getting at the controls of the final version to continue the adventures of May and Cody. 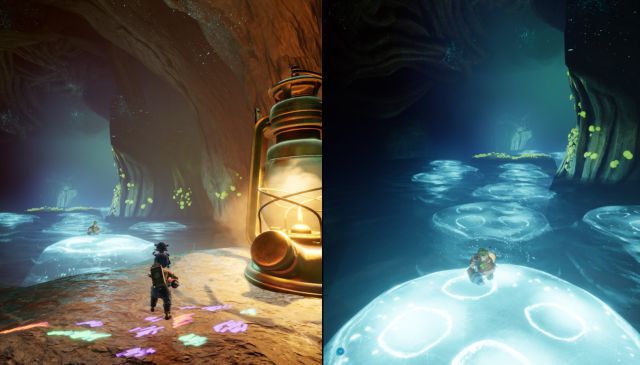 For now its launch is planned for PC, PS4, PS5, Xbox One and Series X / S, but from Hazelight Studios they do not rule out the idea that in the future it will also land on Switch: “I am a big fan of Nintendo, so we would love to be able to consider the option of a version for Switch in the future ”. For now, it will be from March 26 when we will find the title available on the aforementioned platforms. Despite not having tested the next-gen console version, Fares himself ensures that it does not have special functions (such as those offered by the PS5 DualSense) beyond those of the consoles on which they land. There is also no crossplay, but there is a “friend pass” as in the case of A Way Out, thanks to which it is only necessary for one of the players to have the game so that the other, online, can also enjoy (and without the need to checkout) of this adventure of love, cooperation and discovery.