You are here: Home / Maquette / Maquette, PS4 review. The little theater complex that is life 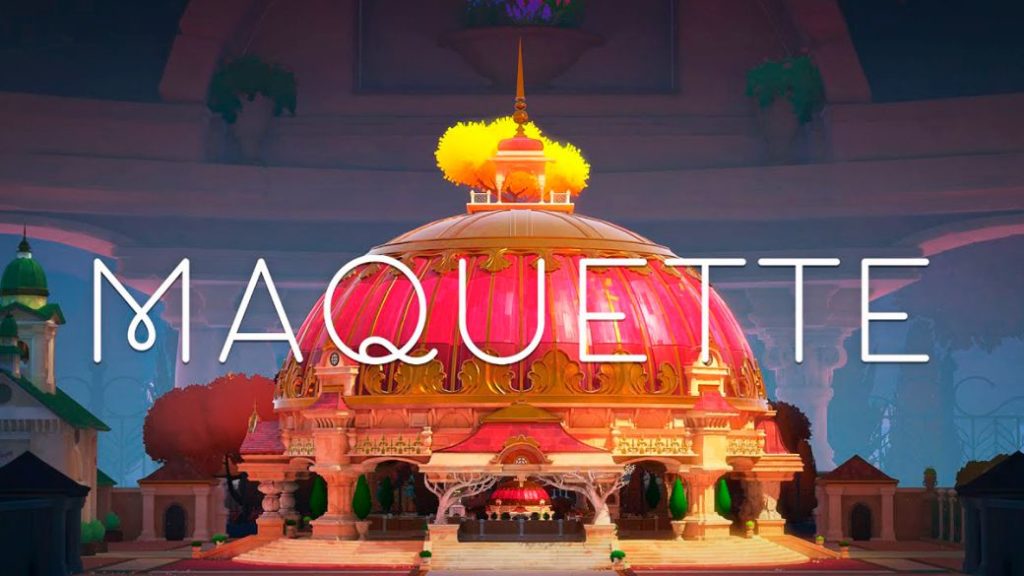 Graceful Decay launches on PC, PS4 and PS5 with the video game Maquette under the stylish mantle of Annapurna

It happens in recent times that a cinematic event begins in the dark room before the credits even come out. The once sacred moments when the studio’s untouchable logo filled the screen with its indelible fanfare are here forgotten. In certain movies fueled by hype for months, the logos of Fox, Universal, Marvel, Paramount, Disney… are soaked visually and soundly with the tone that will come later. The tickles flutter in the stomach, the excitement rises from the second one. Are you ready? Because what comes next is very big.

In smaller productions that does not usually happen. His intimate dramas, his incisive comedies, his honesty need no tinsel. That is why it has caught our attention in Maquette, which is not a cinema but a small work, which is not a film but does come from the hand of a video game distributor, Annapurna, which is also dedicated to distributing them. The hitherto unchanging logo of the distributor that precedes the Press Start is adorned on this occasion with beautiful drawings and pleasant colors. There is no announcement of future onomatopoeias here, but rather the intention of creating an intimate space since we installed the game.

The placid walk with which we began transmits peace. We walked under a starry night through a beautiful garden illuminated by garlands. The prologue is short because it works as a tutorial and it consists of learning the simple use of a couple of buttons. Immediately we come to the central area that will be where the rest of the game will take place. And the first surprises appear.

We are facing a huge dome with several and very different areas around it. If we get under the dome we realize that the structure is replicated on a smaller scale in its center. We then look from our position and guess that the same place where we are is the intermediate scale in relation to a larger one that surrounds us. The main mechanics of the game are thus revealed. If we drop an object on the small model, it will appear oversized where we are. And vice versa, we can take a tiny object from the model that maybe we can use on our scale. The complexity rises integers when we ourselves can move through elevators between the different scales. We do not reveal anything if we put as an example something already seen in trailers on the internet: having a key that has already been used to open a door to another room and use it in the model as a bridge to continue moving forward. 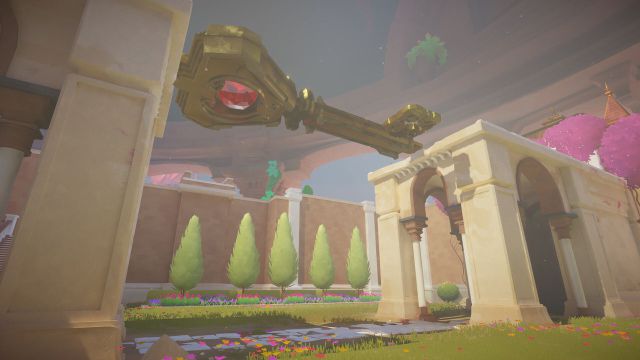 Although the mechanics are limited, it manages to introduce new features from time to time, such as using different colored crystals that allow us to pass through different rooms and spaces. The possibilities are multiplied, of course, and the study, so that we do not get lost (or lose patience), makes the path easier for us by making the areas that do not come into play at all times impassable. Thus, we avoid wasting time in places that do not deserve it, also frustration in the face of challenges. And it is that this is the type of game that varies its duration radically depending on how sharp the mind of each player is.

Maquette’s influences seem clear to us but, beware, they have not been too exploited so far. The commented mechanics is not something new. We already saw it, for example, in A Fisherman’s Tale, a 2019 title in which the intrusion of radical changes in the size of objects, in the same scenario at different scales, was more shocking because it is a Virtual Reality game for PC and PS4.

And if in its basic mechanics it is not something new but it is unusual, we find the same situation at the narrative level. We believe that the main influence there is the fantastic What’s Remain of Edith Finch, with her phrases decorating the stage. Thoughts appear before us with the warmth of hand calligraphy. They also give us clues that are assimilated very well with the mechanics, and that while still enriching what we are told. These phrases reflect a sentimental relationship, which results in their exposure one of the findings of the game 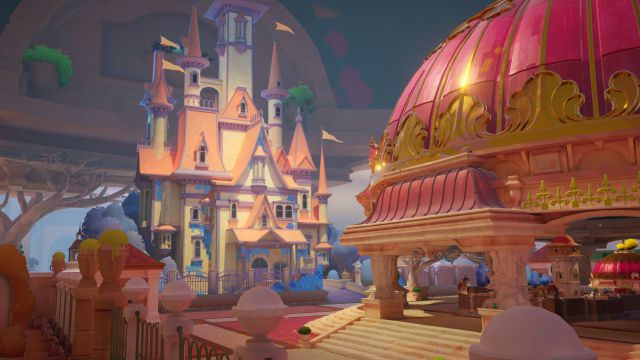 Maquette and the metaphor of relationships

The classic boy meets girl is delivered in Maquette in an insultingly cool way. The outstanding performances of the lead duo, Seth Gabel and Bryce Dallas Howard, married in real life, come naturally, and the script makes the difficult feel easy. Everything flows. It does so through voices and ambient sound, without ever leaving the metaphorical setting of the game. Here the nervous laughter after a collision, there the first I love you between doubts, in the middle of the slow maturation of two adult people who begin to think about a common future.

The beautiful initial setting gradually loses its colors in the spaces that surround it, and the colorful fair in which the couple had a sparkle in their eyes fades into ramshackle and gray suburbs. Those details of yours that made me laugh have turned into anger. What is happening to us? I suppose that Maquette is a game that wins integers according to the life experience of each player. The fact that someone can be reflected in the story that is told will make them think and feel more deeply the love and pain of the protagonists. It’s the same old story, yes, but it has also been ours at some point in our lives.

Thus, what makes Maquette special is that something that we have witnessed a thousand times in a song, in a movie, a play or a book, or that we have even experienced in our own flesh, is shown in the video game in a way radically different. One could have opted for a realistic representation with conversation mechanics, but the game relies on metaphorical representation and the use of puzzles, thus becoming something unique. We do not know which came first, the chicken or the egg, the mechanics or the narrative, or if both were devised at the same time as a whole, but the fact is that the result fits without too many fissures.

Music also helps a lot because it is used in a very special way, in the vein of Life is Strange, Death Stranding or a certain moment of Red Dead Redemption. And it is that it surprises us, beyond the usual use of heartfelt instrumental compositions, with intimate, small songs, more folk and LoFi than pop. It is that extra emotion that marks the end of the stage, the special song to remember as the soundtrack of our lives.

It must have been quite an experience for the leading couple to carry out this work, almost as if it were a marriage therapy, we would dare to say, when facing love and desires, routine and loss of passion on the couch. The problem with Maquette is that the narrative about the gameplay stands out in the whole, pushing the first to the second, being evident a certain lack of balance. After all, as in many relationships, right?

Maquette is an intimate game, more like the interior model that it keeps on its central stage than the central stage itself. It is also beautiful and imaginative, although it may not shine as much as we would like. Its mechanics of using objects between different scales is simple only sometimes. Of course, it will make you think of many moments. It draws attention for the excellent couple’s story that he tells us little by little and that aesthetically affects the stage. It is very well written and excellently interpreted. It is fresh, natural, credible, and its development helps us want to move forward. Maquette is Graceful Decay’s first game, and we certainly can’t imagine a better name than that, Elegant Decay, for a developer and game that fit perfectly into Annapurna’s exquisite catalog.