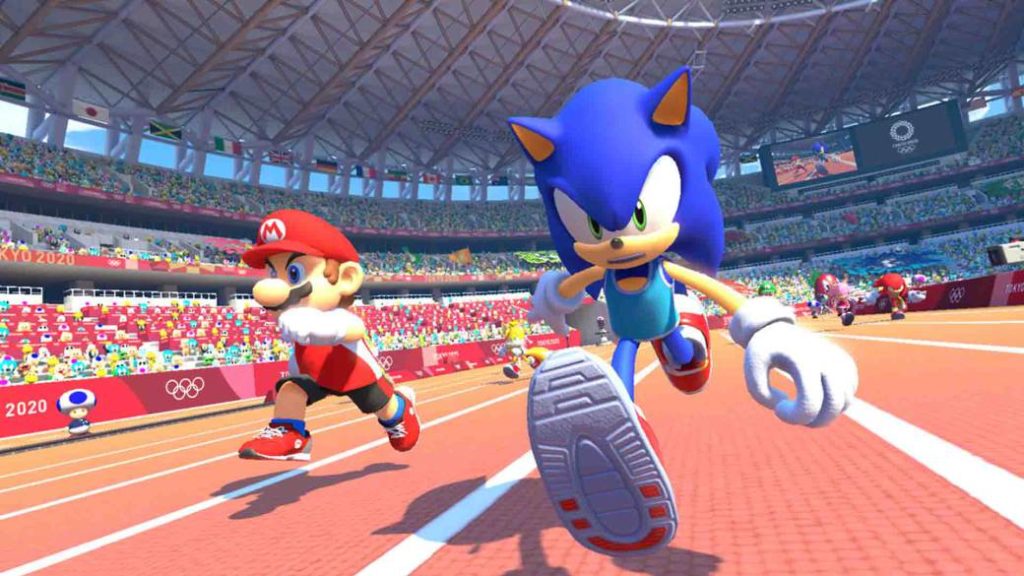 We warm up with our impressions of Mario & Sonic at the Olympic Games: Tokyo 2020, the new adventure of the mythical duo on Nintendo Switch.

The World Athletics Championship held this week in Doha, Qatar, serves as a thermometer to measure what we will live next year in Japan. Tokyo will wear their best clothes during the 2020 Olympics, an occasion that Kyoto has not wanted to miss. It's time to warm up the track; Mario & Sonic at the Olympic Games: Tokyo 2020 is about to reach our Nintendo Switch.

From FreeGameTips, we have had the opportunity to represent our country with the best characters from both universes. A luxury squad that aims to be the kings of family gatherings in the final stretch of this 2019.

Go for the gold

Almost from the beginning we are urged to introduce ourselves fully in the campaign mode, whose presence takes on the full prominence of the offer. We must confess that we have been surprised at how peculiar the plot thread is, with a Doctor Eggman that the ‘brown’ one more time; On this occasion, Mario, Sonic, Eggman himself and more are immersed in a video game console called ‘Tokyo 64’, whose historical value is incalculable. 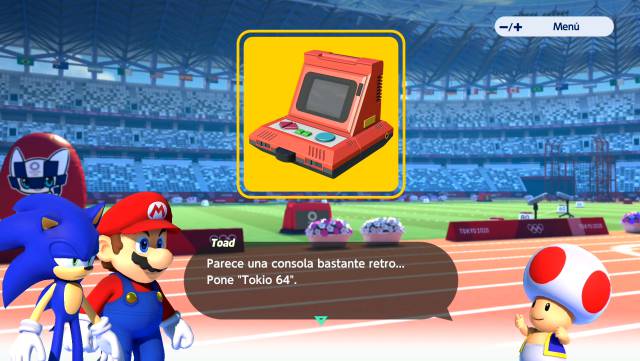 The name could reveal the intentions of the study: Tokyo 64 was the first Olympiad held in Asia, a historic landmark that all natives remember with special affection. This parallel between 1964 and 2020, between the retro and the modern, creates from the roots a special review of the history of the Olympic Games and the Japanese capital. All corners of the map are full of information capsules that reveal details of what is felt in the city before such an event.

When we jump to the game console, the Olympic tests go to their 16-bit version; most of the basics are present, especially those that are performed on the Olympic track. Completing them will inform us of the progress necessary to reach the ‘key’ moments, whose mini-games are a bit far from what we see in the rest of the adventure. Who would win in a duel between Sonic and the bullet train? We can only see it here. 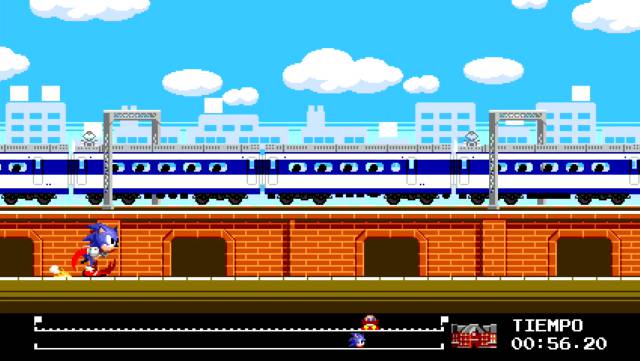 On the other hand, between chapter and chapter, there is also a place to participate in what happens in the real world with those characters that have not been absorbed by the machine, such as Luigi, Tales or Peach herself. The progress is similar to that when we are in Tokyo 64, with the nuance that a world map of the entire city will be displayed here in which to choose which emblematic site we want to choose. Although it has not transcended the estimated duration of the campaign, the time we were at the controls was enough to complete the first three chapters.

If something surprised us about Mario & Sonic at the Olympic Games: Tokyo 2020 were the possibilities of the Joy Con. Sometimes we forget that both controls have their own motion sensor in the purest Wiimote style, without the additional peripherals that needed that (plus, sensor bar …). You only need a small preliminary calibration to be able to enjoy them with complete freedom. 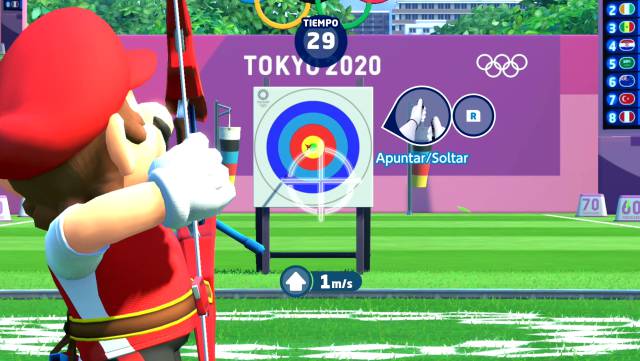 To test them, we go directly to an ideal test for motion control: archery. In it we had to place the two arms in a horizontal position, and once done we simply had to make the gesture of loading the arrow while pointing with the left arm stretched. It's amazing how precise and comfortable it is; It reminds us of the best moments of the Wii Sports franchise.

However, not all tests take advantage of its possibilities. Boxing speaks for itself, but it is skateboarding, surfing or rhythmic gymnastics when we see certain weaknesses. Not for failure of the sensor itself, but for the blandness of the chosen method. For example, in the first one we should only extend our arm and raise it when we want to jump. Lack of speed, the possibility of doing certain stunts. Everything is too narrow not to leave the jack, horse and king.

When we passed the free tests, several tests were the ones that surprised us by their forcefulness from simplicity. Football, for example, can always be a safe value, but the truth is that it hooks from the first moment we touch the ball. It stands out for its speed in the game, the fantasy of its steps and bankruptcies. In short, the best moments aboard Mario & Sonic in the Olympic Games: Tokyo 2020. The same with rugby 7. 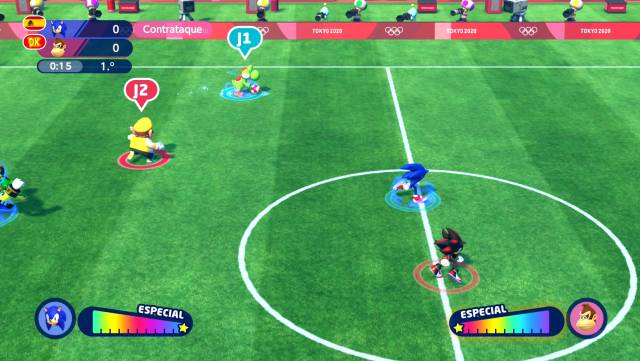 In the combat area, fencing stands out above boxing. The second usually has detection problems if we use two separate Joy Con, in addition to staying as a light version of the possibilities offered in Wii Sports. Instead, it is in the art of sword duel where we find the perfect balance between strategy, functionality and fun. Who does not like to prick his rival?

What never fails is a good dose of athletics. Both the one hundred meters smooth, like javelin and even disc throwing, are tests that always stand out for how easy it is to give everything for everything without having much skill. Shake the controls, run and keep the javelin posture in your hand, go around with the disk … everything serves to make the player feel part of the ‘party’ of the sport. Sport that reaches 24 different tests, three of them in fantasy mode, and not counting those available in retro version. 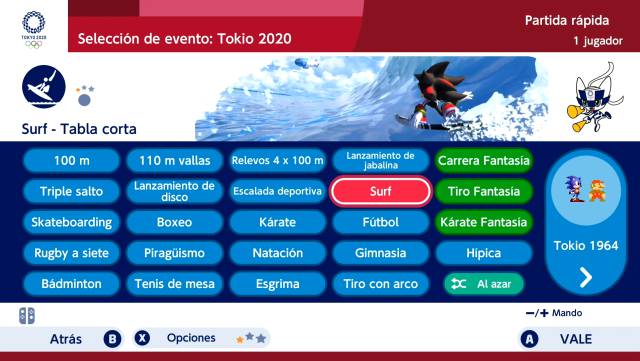 And Mario & Sonic in the Olympic Games: Tokyo 2020 seems to point to the new great party game of 2019. Playing with four other players at home is a difficult feeling to explain with words. It is a great pleasure to share a sofa doing all kinds of movements. Of course, despite the fact that in this text we have emphasized the Joy Con, the game can be perfectly enjoyed in any of its formats: pro, portable, desktop with controls …

The Olympics kick off in November

As we said, Mario & Sonic at the Olympic Games: Tokyo 2020 has surprised us. It does so because of the freshness it brings, because of the hilarious moments of the campaign mode, because of how inspired it is compared to Rio de Janeiro or London. Only time will tell, once we have it in our hands, if that potential ends up in its full spectrum. For its part, the game is scheduled for release on November 8. We have one month left to warm the dolls.