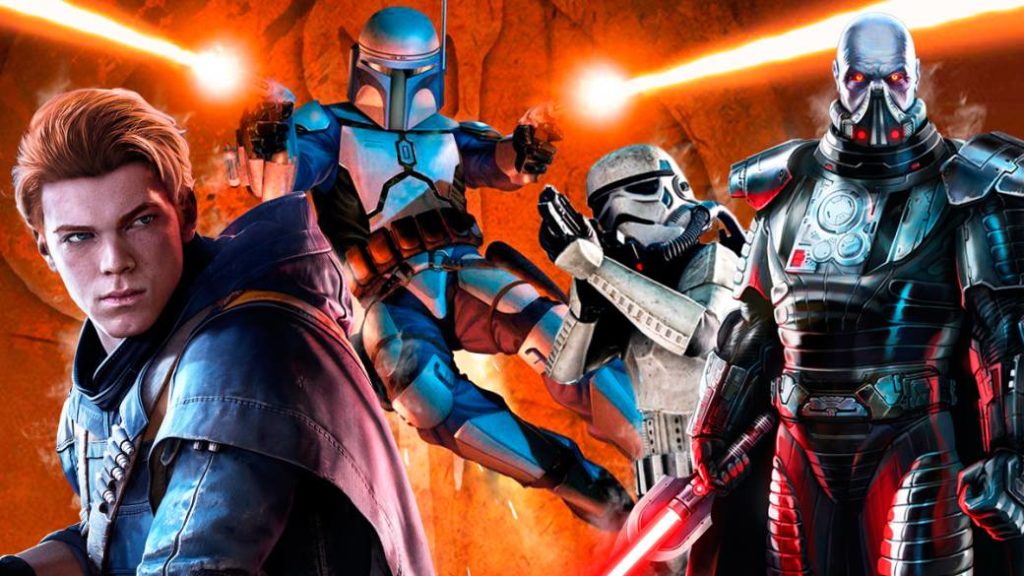 On the occasion of May the 4th, we update our report with the best games that have been published of the work of LucasArts. Essential titles, games where we can emulate the events of the movies or other universes.

May 4 is considered the day of the Force (May the 4th) and is a day for the meeting point of Star Wars fans. Many are in luck today. It is not for less. In addition to the closure of the third film trilogy, we can enjoy endless content through Disney +, where the Mandalorian stands out above all, one of the great series of recent times. So, we are going to review what are the best games about Star Wars to date.

This story was originally written years ago, and was first updated with the arrival of Rogue One. Now we update it again.

Although the currently fashionable title is Battlefront according to EA DICE, the franchise had its moment of success years ago with the arrival of Pandemic's Star Wars Battlefront II. It was published a decade ago and was an amazing game for Star Wars lovers, since we had a proposal capable of covering the six films published so far. The presence of a great variety of troops, available characters, the importance of the Jedi and heroes or space combat were some of its great virtues. Admittedly, it reused maps from the first installment and the single mode was quite short, but its online options and the Star Wars setting did the rest.

LEGO games have already become true classics within the video game industry. But before the boom in sandbox games that premiered with LEGO Batman 2, more than interesting titles had already been created, including the Star Wars trilogy that came as a compilation in the last generation of consoles. With characters and universes adapted to the reality of LEGO, the house brand soundtrack and the recreation of situations traced to the films, it was possible to make a simple title, without voices, but very faithful to everything we lived in the War of the Galaxies Of course, with its own elements such as the construction of objects or the possibility of collecting all kinds of objects and extras, since it is still a LEGO game.

Bounty Hunter with Jango Fett at the helm is a game that demonstrates how the world of Star Wars can give a lot of itself without having to focus on the protagonists of the original films, but simply encompassing new proposals set in the universe in question. An action game in which our hunt is carried out in a successful way thanks to a control of the successful character, its great finish at a visual and sound level (also counting dubbing into Spanish). Great variety of missions to overcome with our solid arsenal while we find the most wanted in the galaxy. Surely it would be missing having another mission to make it more complete and not as strong for non-Star Wars fans, but those should have already left this article behind in the introduction.

If you talk to a fan who had a Gamecube at the time, you will surely remember with special affection among the exclusive console games the great Star Wars: Rogue Leader, one of the most impressive titles that is remembered from that generation of consoles. A brutal game in the technical section that allowed us to experience the greatest battles in the galaxy. A game that fans of Star Wars liked and also lovers of space arcades or action games in general. Its visual section, the impressive soundtrack or the intensity and frenzy that it offers from the first game make it one of the great references of Star Wars. It is true that then a Rebel Strike came out that was still one step ahead in the graph, but it was not so solid, especially due to those debatable phases on foot that did not quite materialize.

Admittedly, the Star Wars approach to the MMO genre did not start as expected. Problems with the content and a somewhat debatable business model made the title move away from the initial hype. But as in this type of game, companies can correct controversies and controversial decisions in time to redirect the situation. And this is what happened with a game that is currently one of the most prominent among quota MMOs. The change in business model and the constant appearance of new content in the form of expansions make Star Wars: The Old Republic the MMO that every fan of the saga expected at its launch. If you want to travel for months a world like the one Lucas created but in video game format, this is undoubtedly a great option to consider.

The X-Wing space combat simulation saga cannot be overlooked in a review of the best Star Wars games that have come out in video game history. It was in 1993 when we hallucinated with the fact of being able to control an X-Wing, but the game at hand left us even more amazed with the Tie Fighters as protagonists. We happened to be on the Empire side during the events of the Empire Strikes Back and Return of the Jedi movies. The novelties that allowed the control of the Tie Fighters with respect to its predecessor and a base that was a success, the title was acclaimed by the press and by the public. In addition to the main campaign we also had side missions and secret objectives that supported extras and replayability. And naturally, inside the cabin everything was a real past for the time.

A year before X-Wing was released on PC, the first installment of the excellent LucasArts game trilogy for the Kyoto company's console arrived on Super Nintendo. Super Star Wars is the representative of three brilliant games that knew how to mix the world of Star Wars with one of the most successful genres at that time, 2D action and platforms. Those first moments with Luke Skywalker shooting left and right at all kinds of monsters in the middle of the desert is engraved on the retina of many of the players. The classic run and gun was made with polished and precise gameplay and also allowed to drive a landspeeder or the X-Wing itself. The variety of available skills and the intensity of the game, as well as its sequels, make it a proposal to consider for future action games.

To be able to become a Jedi Knight. This is what neither more nor less offered Jedi Knight II: Jedi Outcast, a game that managed to develop the initial idea like no other game had ever done before. An evolution of the saga that started with another classic like Dark Forces, a game that had to compete with the ubiquitous Doom at the time. The relevance of Dark Forces II was important but it is with this Outcast when the saga takes a significant step forward on several fronts. It had a hard first few hours, but overcome, it became a superlative game in almost everything it proposed, such as fighting with the sword of light with various types of attacks and combat styles available. The presence of puzzles to solve, the FPS mechanics that knew how to work correctly for the time and the good level of the script did the rest.

Star Wars Battlefront 2 came out with a lot of turmoil for sale, mostly because of a monetization system that was heavily criticized. Despite this, the title had good multiplayer wickets to enjoy the best matches in the galaxy, and time has undoubtedly shaped and improved it. One of the changes came with Rogue One, with the fourth and final Star Wars Battlefront DLC, dedicated to this movie, and which comes with four new maps, including the tropical-looking beach of Poison Scarif. Added to this are two new heroes, Orson Krennic and Jyn Erso, and a new game mode that combines battles in space with others on solid ground. Recently, this February 2020, it was updated with two new heroes and new maps. All this, the presence of space battles in an update shortly after the game's release and the current competitive price make it a game more than recommended today.

The last to join the list of best Star Wars games is Jedi: Fallen Order by Respawn Entertainment. One of the best games of 2019 that took us to the experience of being a young Jedi fighting against the empire. An action adventure with a combat system reminiscent of Souls, a wide variety of situations and maps in which there is some backtracking and a more complex design than simply advancing without delay. A very outstanding title, with a good platform system and that offered us great battles and locations of all kinds. We breathe Star Wars everywhere and celebrate that Respawn Entertainment has hit the spot with this installment, which will surely have a continuation in the future. We are already looking forward to it.

But the must-have Star Wars game is …

Star Wars: Knights of the Old Republic (and II)

It is for many the best Star Wars game that has ever been created, and it was a project as ambitious as it fulfilled the expectations that had been generated around it. Bioware delivered a coup of authority with a title that stood out for recreating a huge world to explore and delve into, a gameplay tailored for those who were not experts in classic RPG and a pure Star Wars setting. The second installment knew how to introduce new characters and settings, maintain the role-playing essence of the first installment and the successful combat system. If you liked the first, you will like the second, and in short, the two KOTOR (the first is even on mobile devices for the clueless who did not play it at the time) are excellent role-playing games and brilliant titles from Star Wars.

All about Star Wars and the video games