You are here: Home / Nintendo / The Legend of Nyel: Lore Hunters 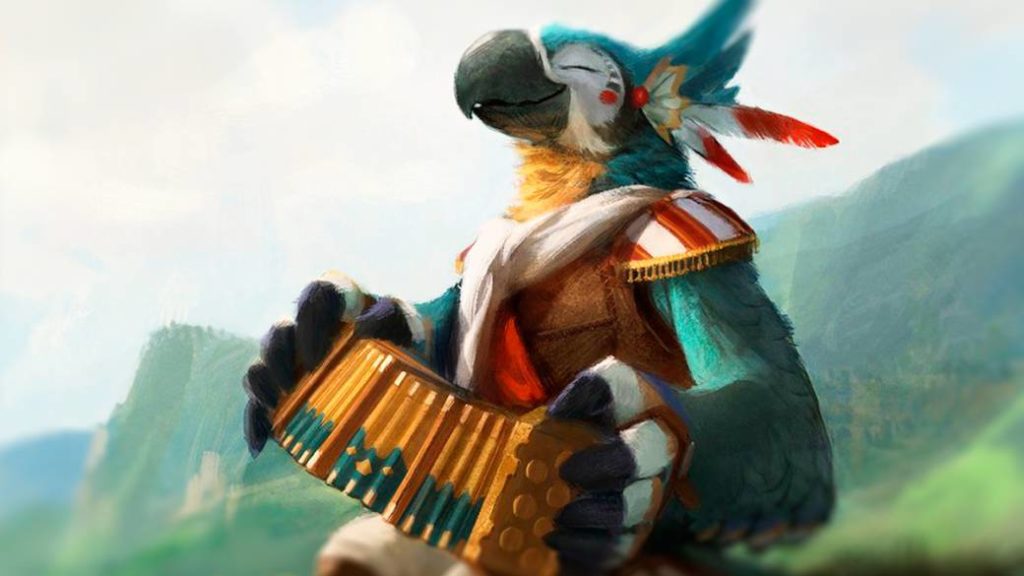 The Legend of Zelda: Breath of the Wild has hundreds of characters and stories. Today in Hunters of Lore we tell you the story of Kass, the troubadour Orni.

Once upon a time, there were legends of powerful knights who performed a multitude of incredible deeds in order to rise as an icon and erect his name in the imperturbable remnants of history. Achilles, Beowulf, Lancelot, … An endless list of heroes who by their epic feats, were almost considered gods. However, his recognition and uprising are not only the fruit of the gentleman who performs these feats; and it is that the figure of the aedos, the bards, the troubadours and the minstrels form a fundamental role in what we like to call "stories".

In ancient times, they were responsible for announcing the new and happening and wandering from place to place to tell the countless deeds of the heroes and celebrities of the moment, among other things. A deeds that, with great use of the verse and its characteristic literary resources, the bard intoned before a crowd sick of hearing the stories of the heroes. A little "supposedly" real information, many fictional dyes, and a magical result in which the knight is positioned as the final champion to beat.

The figure of the bard has always been of interest for his bohemian and wandering character. Lonely poets who roam the world telling the stories of others, turning them into an art form to be part of an echo, which although distant, remains immortal in the collective unconscious. Many stories have been told of these figures, worthy of the purest romanticism: Taliesin, Maglor, Dandelion, … However, the story of the bard of bards, the witness of bards, the witness of the wild, the protector of ancient stories, … Today, we tell the story of the tireless Kass.

The troubadour Orni and his accordion 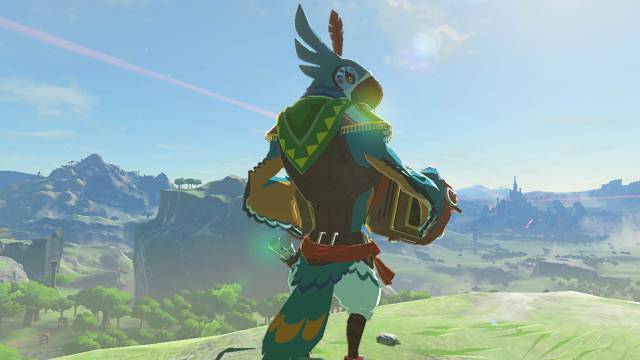 Also known as Nyel, Kass is a troubadour Orni who lives in the vast kingdom of Hyrule. Accompanied by his always faithful accordion; Kass flies over the valleys, peaks, hills and waters that make up the infinite Lower Lands, in a constant search for stories, legends and deeds that occurred in a remote past time, almost forgotten. After these vestiges in the most unusual corners of a Hyrule plunged into darkness, Kass sings a song to hope, memory and history of a hero like no other has seen this beautiful land: The Chosen One, Link.

Beyond the interesting presentation of this wandering minstrel, we can go a little deeper into its history through what we know. His teacher was a member of the Sheikah tribe, and the poet of the royal court of Hyrule. It was he who taught him the art of telling stories through music. Apart from this, this unknown tutor was one of Princess Zelda's companions, who was the same age. Although he knew that love would not be reciprocated, the poet fell in love with the princess of Hyrule. Unfortunately, his suspicions were true, since as they say, the princess only had eyes for her personal escort.

Throughout his life, his teacher had been creating a song that told the story of Hyrule and his hero, but Ganon and his disastrous Calamity took the life of his teacher, among many other things, and the work was incomplete. Fortunately, this Sheikah chose his apprentice well; and it is that in his honor and memory, Kass leaves behind his lovely Orni Village every day to complete the work of his instructor, flying over the world in search of extracts to add and singing his catchy melody wherever the wind takes him.

Kass seems to be a conscientious objector; He is not a vehement being, we have never seen him in any battle or holding a weapon, not even sin of pride like some of his companions. His condition Orni gives him an incredible musical ability and his powerful will leads him to play his works to places unexplored by most Hylians. However, it has something much greater than these qualities: the value of time, memory and memory through its songs.

Kass and Link: A curious relationship 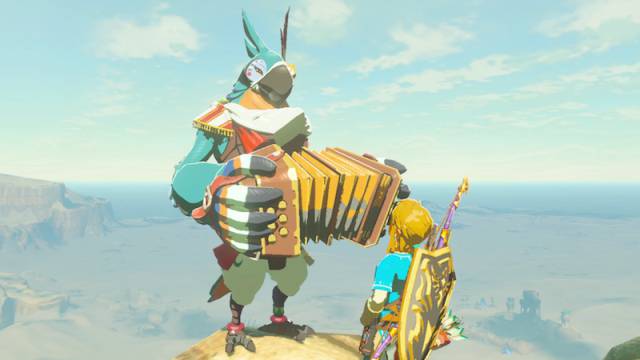 Under this fundamental value, the crossing of the hero of Hyrule against Ganon and Calamity is also indirectly grounded. After a 100-year dream, Link wakes up amnesiac, with no memories of who he was, in a land desolated by the darkness and debris of a once prosperous kingdom. The route of its extension, as well as the development of its adventure, will make the Chosen one recover the memory, remembering little by little who it was, to face the evil that ravages Hyrule.

Throughout this journey, Kass and the hero have many relaxed and interesting conversations, and between stories and desires, our bard plays his accordion to accompany him with stanzas that speak of ancestral sanctuaries, heroic challenges and nostalgia for a distant past. These hymns will be key to the wanderings of the Chosen One, since they will reveal to you through the clues the location of ancient sanctuaries where you can become more powerful or return you to some recess of your mind where you can decipher a part of the puzzle that has become its past Our feathery bard friend is always there, accompanied by his accordion, in one of the corners of the world, to give us a haven of calm and nostalgia through his verses, reminding us who we are and what these lands were. 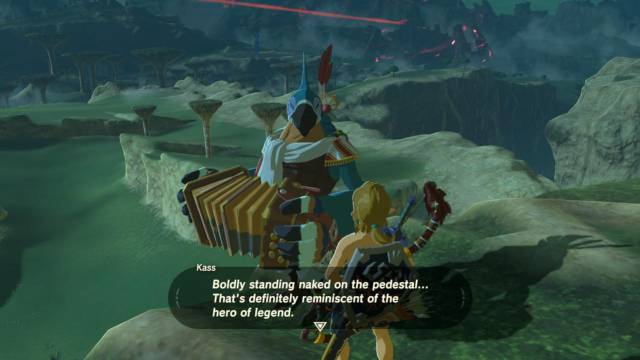 This friendship that eventually acquires between the bard and the Chosen One, was something that had been predestined for a long time. It was his teacher who created many of those works to help the Hyrule champion in times of uncertainty. Knowing the situation of the kingdom and what was to come, the poet Sheikah relieved his unfinished work on the wings of this troubadour, so that he could show it, at some point, to the Chosen One.

The songs and works that Kass studies and plays have not only helped Link regain his own consciousness; and it is that thanks to one of his last intoned works to which he called, "The ballad of the elect", it seems that the existence of another Divine Beast, unknown to date, that lies somewhere in these extensive fields has been confirmed … Kass knows many of the melodies of the past by heart, he has even been seen on occasion in inns, singing an equine song that reminded us of ancient times of sword and Ocarina.

The other side of the minstrel 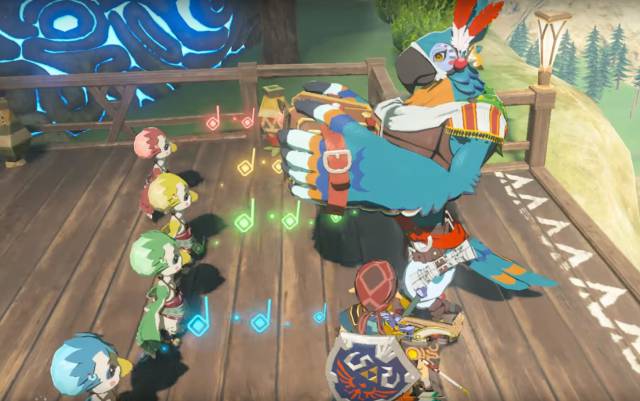 Although in the first instance it may seem like a lonely and bohemian soul, Kass lives happily with his family in Orni Village. After his constant search for stories and songs, our orni always returns with his own to enjoy his days. He teaches music to Kheel, Notts, Kotts, Cree and Genli, his daughters; He spends his time happy with his wife Amali and enjoys the routine and life in his home … A close and familiar being who does not forget the will of his teacher, always alive in his heart and accordion.

Kass is the bearer of ancient stories in this age of darkness for Hyrule. A kind and charitable being who substitutes the weapon for the instrument, which reconstructs through its melody the foundations of this wasteland. The other hero of Hyrule whose objective is the will of his teacher, instead of that of a princess, ready to be intoned once again in the winds of change that come from the sea.